Uncle Dave has attended University (a second rate one), is semi-literate and extremely opinionated. So, if you have a pressing question about riding technique, frame geometry or real estate investments, fire away! Uncle Dave is now taking your questions.

I find I’m constantly getting into verbal (and sometimes physical) arguments with motorists. I would say 95% of the cases involve motorists who get pissed at me for passing them on the right. Most of these incidents happen on W.16th Avenue where there is no dedicated bike lane and the road is single lane each way. The way I see it, if I’m slower than cars, they have a right to safely pass me. I have an electric bike (that’s kinda neither here nor there but I’m generally quicker than most cyclists especially on hills) and I believe that if I’m faster than cars (happens a fair amount on this road due to congestion) then I should also have the right to safely pass motorists. Generally what happens is I do this and then a car feels the need to race by me closely to ‘teach me a lesson’ which of course I object to and then we argue. I have gone to the ICBC website and having troubles finding any rules or literature on this subject. So I ask you and your community… am I able to pass cars safely just as they are able to pass me safely?
Thank you for your consideration,
Confused (Really) About Passing

On the surface, this is an easy question to answer. Within the People’s Democratic Republic of British Columbia, it is in fact illegal to pass cars on the right while on a bicycle. E-bikes included. I think. Who knows? The laws are kind of difficult to interpret, which might explain why each cyclist sees fit to break these laws dozens and dozens of times each ride and why nobody thinks twice about passing a car on the right. And motorists generally don’t care either and respond to this rampant lawbreaking with a shrug of the shoulder and a pick of the nose. Which raises the question as to why are drivers getting so mad at you?

Well, it could be because you’re taking them by surprise. They’re used to endlessly seesawing back and forth with some stupid cyclist, forming a brief little relationship, and receiving a kind of sad but amazing sense of satisfaction every time they re-pass the cyclist that just passed them. And because they’ve just passed the cyclist that is passing them, they’re aware of their existence and don’t get all that upset about seeing them again. You, on the other hand, are emerging from their blind spot like a crazed, world threatening, two wheeled destructor and are moving too quickly and there is no way you are going to get away with that shit. You’ve surprised them and they respond with a typical motorist’s reaction to anything out of the ordinary – unfounded, unconstrained and unpredictable rage.

But there’s more. The motorists are not only angry that you have passed them, they’re just angry that you exist. You are the worst possible thing that could happen to them on any given day. You’re an advanced evolution of something they already don’t really like. You’re a bicycle. And you have a motor. Two strikes and who gives a shit if there’s a third. And not only do the motorists hate you, everybody else hates you too. Every cyclist you pass or otherwise acknowledge hopes you get a flat tire. Every pedestrian wishes that you would ride into the back of a parked car. Hatred of E-bikes is one of the only things that these three groups agree on. Irrational and misplaced hatred, for sure. But hatred. But…I mean, why wouldn’t they hate you? You’re thumbing your noses at all of them. You’ve managed to combine the freedom and the exercise and the speed into one amazing package. They’re all thick with envy. The pedestrians are jealous because they have the range of a toddler. The cyclists are jealous because they have to drag ass around town. And the motorists are jealous because they’re fat and their pants are splattered with coffee and Egg McMuffin stains. Like a George W. Bush era terrorist, they hate your freedom. Really, you’re just asking for it.

Another thing to consider though, is that you might just be an asshole. I mean, really, most humans can go weeks at a time without getting into a heated argument with anybody. If you’re finding that it’s hard to get through a day without near fisticuffs with total strangers, it is a sign that you might be a giant asshole. Maybe not. But maybe. 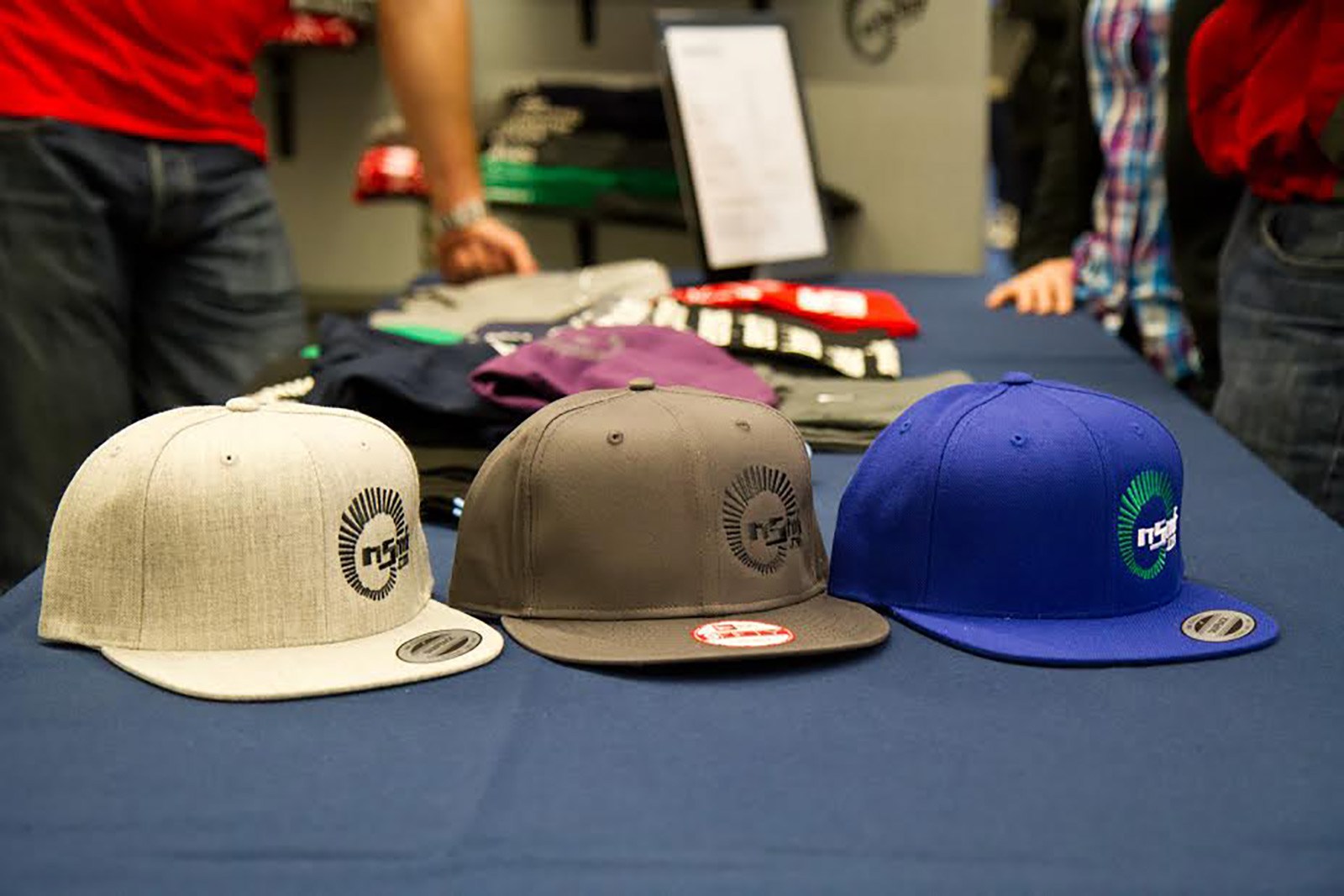 Limited Edition snapbacks. So limited they aren’t even in our online store. Yet.

This week’s questioner gets an nsmb prize pack that includes a limited edition NSMB snapback hat and some NSMB wool-blend socks.

I think I agree with the last paragraph. I've seen way too many self-righteous cyclists in my 8 years of commuting. Personally
I’m of the school of thought that we’re all on these roads together, all part of the problem, so why bother get mad at each other. We all make mistakes, driving or riding, and you’re deliberately, and unlawfully, pissing people off.
All for the sake of saving a few minutes. Why not stick to the 10th Avenue bike route and live in harmony rather than making the world a worse place? Or you can continue to play leap frog with traffic on 16th and keep testing Darwin’s Theory.

Probably embarrassed that all the real cyclists on 10th will laugh at him.

When I ride my all terrain 29'ere enduro mountain racebike, pictured below, I like to ride on residential streets like 15th and 17th avenue because it lets me practice cornerning and drifting. Why any self respecting e-biker would ride on a car only thoroughfare like cornwall or 16th inhaling exhaust baffles me. Are they trying to get cancer?

C'mon, how are cars scraping by your elbows and leaning on their horns not fun?

That thing has to weigh 50 lbs, at least.

I haven't had a road rage incident in about a decade. Maybe I have a likable face.

It could also be that I avoid feeling like I have a sense of entitlement on the road. I love seeing a cyclist pass on the right in an intersection or blow a stop sign and then flip the bird at a car that honks at them. Guess what that motorist thinks of bicyclists now? Don't tar all other riders with the same asshole-flavoured brush and it'll probably mostly work out for everyone.

And this isn't directed specifically at the original letter-writer. Just sayin' is all.

There's a lot to what your saying. I see other cyclists break the rules of the road far more often than drivers. Most cyclists don't seem to understand that they are a vehicle and should follow the laws for a vehicle. That said, there are exceptions. I'll blow through an intersection if I can clearly see that it's safe. I rarely stop for a pedestrian, because there's a whole road and we're both human-sized, there's plenty of room for both of us. I haven't had any problems, but then just not being a dick can be hard for a lot of people.

Everybody who says they see cyclists breaking the rules more than drivers is ignoring people who break the speed limit. Sure, more cyclists blow through red lights or don't come to a complete stop at stop signs, but the majority of drivers speed.

Passing on the right at an intersection when the car is clearly turning right however is a big problem. That's at the light or stop sign. (Particularly downtown)
I recommend that cyclists who do this "rethink" their strategy.

Yes I am a driver, a mountain biker, a pedestrian and probably an asshole so I think my point has some merit.

motorcycles in France are allowed to split lanes and up the side of car traffic. its great. I wish this type of thinking went on here.

Yeah and personal injury lawyers the province over will rub their hands in anticipation. Still a good idea though.

Hahahaha, this is the best response.

Getting angry at irrational people who are angry at you can feel satisfying sometimes, if it's not working, trying smiling, waving and saying, "have a great day!" They'll either be happy about he pleasant exchange or get far more mad than you thought was possible. Both are fun results.

In Australia we have an exemption allowing for bikes to pass cars on the left, which is your right… I guess…

im wondering if dave is related to aunt flo