A Refreshed View of Home

When I was building Powerslave in Nelson, I was convinced the trail needed to be heading downhill at all times to be fun. I rejected any uprisings in the earth as “flow killers” and was determined to build a line completely free of uphills. However, considering the overall line ended up being over 10 kilometres long, this became impossible, and it bothered me. A lot. I cursed Mother Nature for creating a ridgeline with a few sub peaks on it that needed to be crested. I wanted mega downwardness.

At that time I was riding a Cove Shocker, which I dearly loved. However, as we all know, bikes like that don’t move uphill too well. In the past I had done a ton of pedaling my bike uphill and riding it back down. But moving to Nelson changed that, the era of wooden bridges, big drops, and full suspension took over and my imagination went with it. For 10 years all I wanted was big descents, shuttles to the top, and a downhill bike to utilize the primarily fall line style trails of the Kootenays. 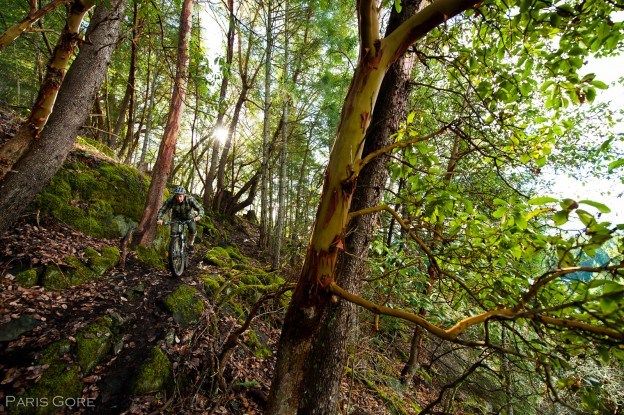 I grew up riding on Mt. Tzouhalem, in Maple Bay, BC. I got into riding because my best friend Paul’s older brother got into it through their neighbour, a guy our dads’ age named Willy. Willy was an engineer at the Mill in Crofton and I assume he got into riding with other guys he worked with.

Paul and I were both 11 years old and had already spent a ton of time exploring the neighbourhood. We’d learned the paths through the forests connecting the roads leading up to the subdivision Paul lived in. We had found caves, creeks, and huge boulders that had most certainly fell off the side of Mt. Tzouhalem eons ago. We had even started building trails near our elementary school. We knew the mountain above the subdivision continued way, way, up above Paul’s house but we hadn’t ventured too far; we had no idea that we could take our bikes above the point where the houses ended, where the mist hung in the trees and the wilderness set in. 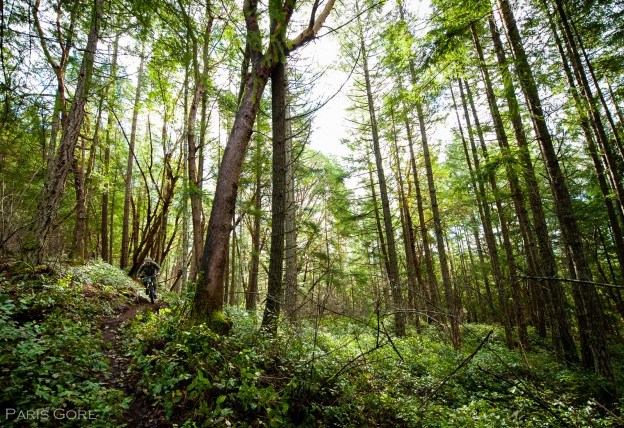 Pedal to the metal on a traverse.

However, one day Paul’s older brother showed us his new (to him) Norco Rampage bike. We were blown away… it even had a suspension fork on the front. My bike was an all white “Tech” and Paul had a Kona from the early 90’s, baby blue with orange paint sprayed all over it. Paul’s brother Graham convinced us to come up the mountain with him, and as we pedaled up, up, up, until we were above the last houses, the paved road became dirt. We began to have a view of the Valley, of Quamichan Lake below and Mt. Prevost to the Northwest.

I remember feeling absolutely overwhelmed with how hard it was to pedal my bike up the hill. The dirt road seemed to stretch above and away from us like it would never end. But eventually Graham stopped, and waited for us to catch up. He pointed to a wide spot between the trees and told us that this was the “trail.” It was a dark ribbon of earth leading down into the trees. And that was my first time following a close friend, on a two wheeled contraption, through the woods as the forest flashed by.

It became a regular thing. We recruited our friends. We started riding with Graham and Willy all the time. It was good to ride with Willy – it made our parents feel safer since we were with an adult. Willy had the most idiotic Dalmatian named Eddy who would always jump out of the bush right in front of us and cause us to vault over our handlebars. Luckily we were young enough that our bodies seemed to brush these crashes off. 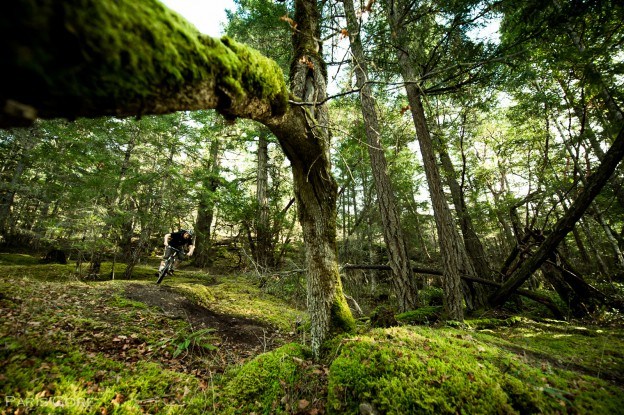 Moss world in the Cowichan Valley.

More of our friends joined in as time went by. Connor had a Cannondale. James got a Kona Hahanna. Tyler got a Rocky Mountain Hammer Race. In Grade 7 I upgraded to a brand new Nishiki Kodiak. Paul got Graham’s Norco Rampage.

We started to find more trails, and we climbed higher up the mountain. Eventually we even found our way to the summit, where Graham had told us stories about how “you could lean right off the cliff into the wind and it would hold you up.” The view from way up there was something we had never known about before. And the wind was certainly as strong as Graham, two years ahead of us in school, had told us.

Flashing forward in time, I am now back living in Maple Bay after being away for more than a decade. Paul and Graham are nowhere to be found, Willy is getting older and enjoying retirement, and Eddy the dog is underground. 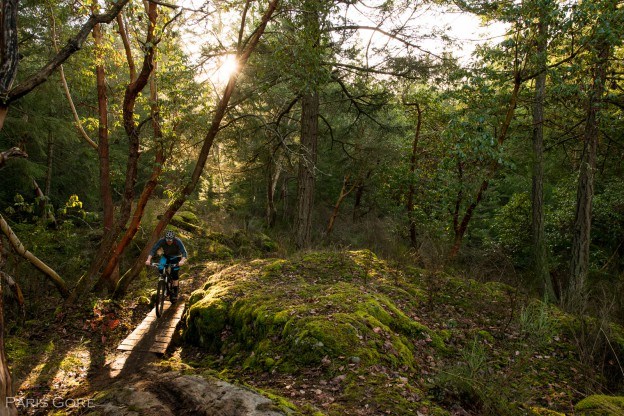 I am showing my lady the mountain where I grew up, and she is learning the trails and routes for herself. I ride with her, and stop to wait. I remember all those spring days when Paul and I would ride up here until dark, making our parents worried, assuming in our youth that our moms would have dinner saved for us, that our dads would fix our bikes for us, that nothing about this mountain would ever change.

My bike has changed, I have changed, and my outlook on building trails has changed. But it took coming home for that to happen. Change has been very good to us and as I watch my lady pedal her way up the trail towards me, I understand that being connected to a piece of land you can call home is a very sacred thing. Mt. Tzouhalem has been torn apart. It is a mere shadow of what it once was. A failed golf course development has left behind what might as well be a strip mine on her flank. The houses have crept further and further upwards. 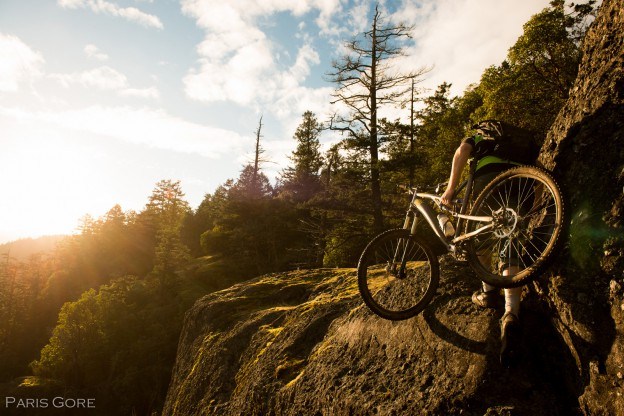 One of the rare times the Kona Satori isn’t able to grind its way up a hill.

But, I am now riding a bike that has changed the way I look at the mountains. Therefore the devastation of Mt. Tzouhalem has been nothing but a catalyst for me to explore further. Due to a 30 lb bike with full suspension, a dropper post, and a design intended for the rider to both soldier up the hills and shred downwards, I am able to enjoy my pastime like never before. And the funny thing is, I am back doing the type of riding I started with. Paul and I would suffer up the hills, and shred downwards. We didn’t give a shit about what kind of tires we had, or if our brake pads were rubbing a little on our rims. We didn’t even know there were different kinds of tires available. We just wanted to ride our bikes on the dirt trails. 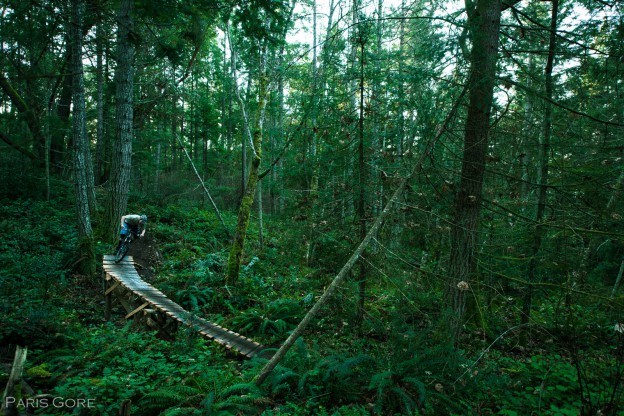 Riley carrying speed on a creek crossing in Maple Bay.

And now, after well over a decade of experiencing the growing pains of mountain biking, I am finally on a bike that can let me ride like that again. If I want to go up, I go up. If the trail has a drop-off, I lower my seat post with the flick of a button and fly over it. The suspension absorbs the bumps, and if I am tired I head home. If I have energy, I climb back up. I am not dependent on a shuttle truck. I am not in a competition with my comrades for who has the most suspension travel. I do not feel peer pressure to huck myself. I just ride.

When I build trails now, I am not forced to make hard choices or sacrifices in the name of gravity. If there is a really cool rock I want the trail to go over, but on the same elevation contour there is also an awesome log ride, I am not forced to choose between them. I just make the trail go up and over the cool rock, and then build a traverse right over to that log ride. “Oh man, I gotta take 10 pedal strokes to get up a little rise to get over to that log ride?” So be it… 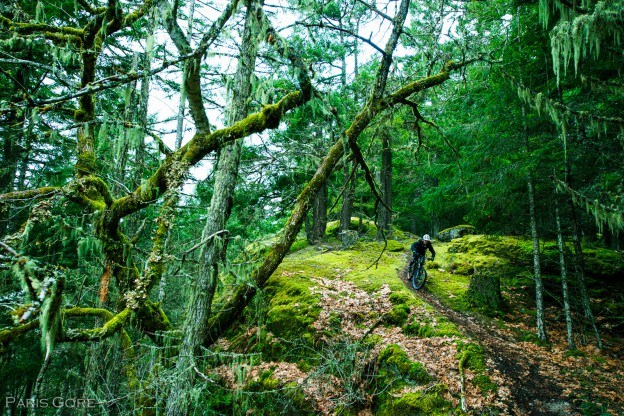 Riley’s girlfriend follows him down the Big Dog on Mt. Tzouhalem.

Back in Junior High, Paul and I didn’t classify trails as individual parts of the ride. We looked at the big picture and set out on rides with goals, like missions. We would know that we wanted to go to the top, but we also wanted to go to the caves, and also loop our way around the mountain to a certain spot where we could easily pedal over to our friend’s house, or go to the beach, for example. We made elaborate maps and put a lot of effort into creating routes that were more than just rides – they were adventures.

I can’t wait for my next ride. And that is exactly how I felt when I was a kid. Everything has changed so much in life. But moving through the forest, on a two wheeled contraption, with the people I want to be with, has not.

We’d like to extend a thank you to Freehub Magazine and Paris Gore for the photos in this article. Riley’s outlook is always positive… have you ever had a refresh on your home view?

Finally took a moment to sit down and read this article. I really enjoyed it and am glad I took the time to give it a good read.

I will admit to being discouraged by the rain this week. See you guys at the indoor bike show!

great read… riding as come full circle for a lot of folks.

Great story make me want to go for a ride right now and enjoy the trail the way it’s supposed to be and just have fun. Thx