Ropelato takes a cue from the early 2000s and brings his skills to the streets... 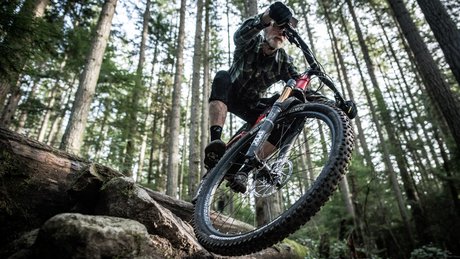 "This is a ridiculously capable chunder pig that would make a fantastic big hit trail slayer, or ripper enduro race rig..."

MacAskill attempts to summit and descend the largest mountain in Africa...

"A 50 acre motocross paradise in the South of France where Nico Vink spent the last couple of years building and perfecting two big jump lines..."

Two wheelsets for one bike is not a new idea to enhance bike value - but how about two very different bikes - 27+ & 29'er - with interchangeable wheels?

Snoop and friends watch a POV with Jaws in this episode of SnoopaVision "also known as things you won't see black people doin..." according to Snoop...

The decade, where the rider rotates around the bike while holding bars, is rarely seen in mountain biking let alone upside down...

"He's a warlock on a bike" -Scott Secco

Run lower pressure and improve your traction without risking flats or busted and dinged rims? Read on...

"I'm well past the 150hr/yearly service interval and the Crankbrothers Highline dropper post was starting to sound a bit crunchy..."

Microadventure on the Emerald Isle

Adventure biking doesn’t have to be far away in some exotic corner of the world. It can be found just outside your front door.

The Snow Must Go On – Adventures in Italy

"Whitecrow's hub allows you to adjust your air pressure within a range of 15 psi from your handlebar - as often as you like...."

50to01 Crushing the Freeride Line at Revolution

There's nothing like a little quality control riding before the public gets a crack at a new trail...

It takes a lot of chutzpah and the perfect conditions to hit 167.6 km/h on a production bike.

How to Set Up Rebound Damping

"Our audience is anything but average, but many of us (myself included) often find it challenging to get the perfect set up..."

Digging for Galena: The Story of Texas Peak

A journey that blurs the lines between here and yesteryear, a story of risk and great reward. Coming soon.