It's the perfect blend of tire-shredding, whistle-blowing action to wrap the year up.

Tim's put together a worthy stack of both things and experiences that stood out this year.

It's the end of an era as the two split amicably, but not before one last kick at the can...

From bikes that defy their category to jackets that deliver and a electronic shifting, Pete’s Best of 2016 choices ran the gamut this year. 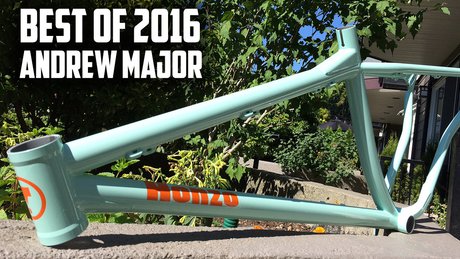 This Is Peaty – Choice Cuts

Four seasons of shenanigans with Peaty make for a big trip down memory lane...

"Supegroms Dane and Jakob Jewett head out for a shred in Squamish, BC. Guest appearance by their dad Scott, whose ankle still hurts..."

A well-rounded Christmas haul that covers the bases, from a good book, to MTB skills, to dressing up your #flaskfriday. And a bike.

Cam and my mom have one thing in common – every year they ask me to draw up a Christmas list and I dread that email like tax season. I try saying things like “I’m good, I don’t need anything, people don’t want to know what I want for Christmas, How about some socks? (link… Read more »

Trails and plants both rise from the ashes of the old, to bring in the new.

The Brits are let loose in America for a 700-mile jib tear down the left coast...

"It was love at first sight at Sea Otter this spring and while I’m usually on the wrong side of the camera on bike tests, I was banking on getting some time..."

The darkness that dwells within many mountain bikers, exposed by the e-bike question, has parallels to the recent U.S. Presidential race. While I agree that there are some legitimate concerns about these bikes and that we should proceed with caution to avoid undoing all the hard work that has allowed mountain bikers to legally ride… Read more »

"You can ride wherever you like as long as you do not disturb vegetation or sensitive soils - basically a giant skate park..."

Even though I need to purge old and useless gear - there are some tools and bikes on my wish list...