Brodie Bikes: How It All Began

This is the true story of how Brodie Bikes began.

In 1979 I was still going to college and learning (well, trying…) to play the saxophone. My saxophone teacher drove a cab, so I figured I would drive cab for a while, probably six months. It didn’t work out like that. Cab driving three days a week has a certain freedom to it, making it very hard to go back to a 9-5 situation. I tried various ways to get out of driving, but they didn’t work out. It was a time of my life when money was in short supply…

In the fall of 1982, I was still driving and still looking for a way out. I decided to buy a bicycle. I hadn’t had one for a decade, so I went to the local shop: The Peddlar on Broadway. The owner, Sam Mak, sold me a brand new Norco Magnum Special Edition 12 speed. I couldn’t believe I had slapped $389 onto my Visa card! It was way more than I had planned to spend.

I started riding. The bike wasn’t great, but it was OK. In February of 1983, I had been driving cab for four years, and I was sick of it. I needed parts for my bicycle, so I walked to The Peddlar, and Sam was coming out as I went in. We said Hi. I went to the parts counter. And waited. And waited, but no one came. So I left. As I was going out the front door, Sam was returning. He asked if I got what I needed. I said no, and told him he really needed to hire someone to run the parts department. Sam said to come back inside, because he had a job for me. I never drove cab again.

I started in assembly, and lasted three days. We were assembling Apollo Sport 10’s; your basic ALL STEEL crappy 10 speed. I don’t mind dirt on my hands, but didn’t like oily / greasy hands for eight hours a day. I got paid $10 per bike, which worked out to $5 / hour; about the same as cab driving.

Dave Mullens was the General Manager at The Peddlar, and on the third day of my employment, I could hear Dave and Sam arguing in the office. An ad was needed for some local publication; the deadline was the following day… they had both known about it for six months, and nothing had been done. I put my head into the office and said, ” I can do the ad!” They both looked at me, and Sam asked how much I would charge. Eight dollars an hour I replied. I used Letraset and designed an ad which took me eight hours, and the deadline was met.

Even though I knew very little about bicycles back then, I ended up at the sales counter working the till. I thought bike parts were expensive, so I gave almost everyone a discount. People liked buying from me. I also sold bikes. Mostly kids bikes. One day, at closing time, Dave and I got into a great conversation about frame design, and we talked about sloping top tubes and 24″ wheels. I really liked the idea of a sloping top tube. I went home feeling good.

Next morning I went to work and Sam said, “What are you doing here?”

I was devastated. I had never been laid off. It was totally unexpected. I walked home and vowed I would never, EVER, work for anyone else in my entire life.

BUT, they needed me. I became the Handyman. I was a contract worker for $8 an hour. My metalworking, woodworking and artistic skills were used to make window displays, sales counters, clothing racks, bike stands, wheel building stands, and much more. The Peddlar had a lot of unused space behind the retail store, and this was rented out to a new bicycle wholesaler. I made some wooden steps for them so they could get into the back of the building. That wholesaler was Rocky Mountain. You might have heard of them. Yes, their front door was off an alley. In those days they only imported Guerciotti frames and Italian cycling clothing. But the owners, Jacob Heilbron and Grayson Bain, had ambitions.

It was in the Summer of 1983 that the first Specialized Stumpjumper showed up at The Peddlar, which had now changed it’s name to Bikes on Broadway, and become much more fashionable and upscale. I rode the $750 Stumpjumper and it was OK, that’s all. However, two weeks later a Red Ritchey Team Comp with matching Red Bullmoose Bars showed up and totally blew me away. I had never seen anything like it, and couldn’t believe anyone could make a bike that beautiful. I had little money, so I decided to make my own…

That same afternoon I went to the dumpster behind Bikes on Broadway, and pulled out a 25″ Sekine road bike frame. I cut off the rear end, and lowered the top tube to give it a slope. I started gathering parts, and building wheels. It was exciting! 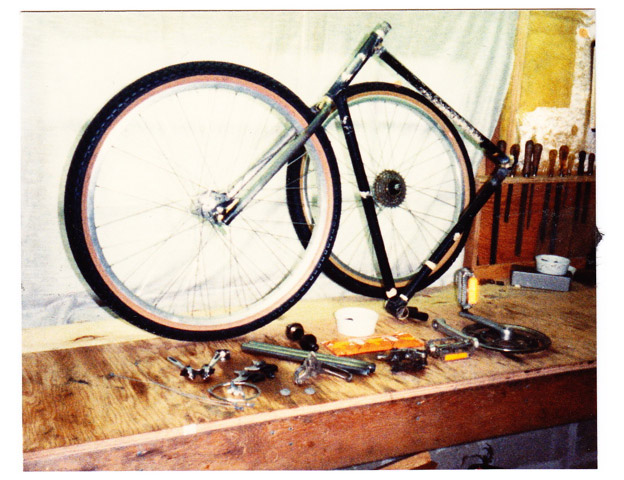 I made a fork jig out of plywood and 2X4s, and by the time the fork was tacked together the jig was truly on fire! I only had oxy-acetylene back then. Here the frame and fork are finished and ready for sand blasting and painting (red, of course…) 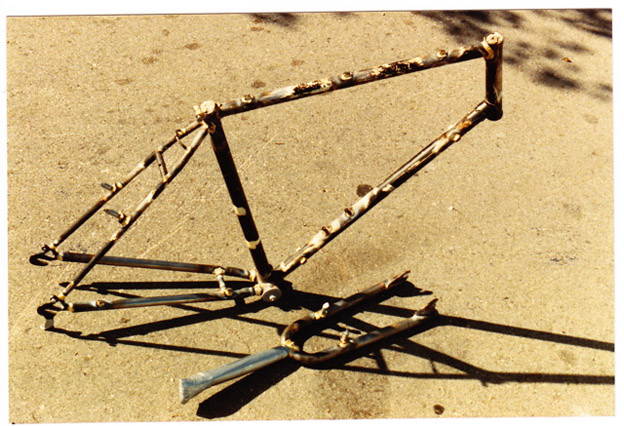 The finished product. Looks like a mountain bike, but is not. The head tube angle is too steep, and the bottom bracket is way too low. Even with 165mm cranks I had to be very careful when pedaling in corners. 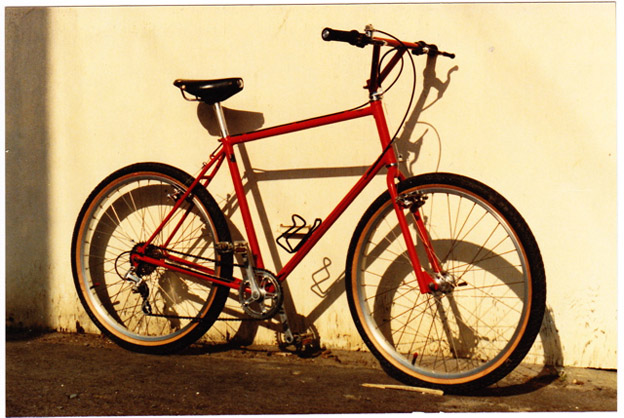 Meantime, Rocky Mountain had purchased Norman Hill Bicycles. Norman Hill was an Englishman who setup a retail shop in downtown Vancouver, then brought over Derek Bailey and setup a framebuilding shop in nearby Richmond. Derek Bailey built racing and track frames and forks, and Norman Hill would drive out there after doing retail, and spray them flourescent orange. They really made a statement around Vancouver, but he went bankrupt, and Rocky Mountain took advantage of the situation.

Now Rocky had a framebuilding shop (which was named Sherpa Manufacturing..), a framebuilder (Derek Bailey), but no painter. They asked me to paint. I said I had no experience. They said they didn’t know anyone else, so I went out there and taught myself to paint.

Rocky was now selling a lot of Ritchey frames, and I was painting all of them. Derek Bailey had zero interest in these new mountain bikes, so I sensed an opportunity. I met with Jacob and Grayson and told them I wanted to build mountain bike frames. They were extremely skeptical. Make that EXTREMELY SKEPTICAL! After all, a year previous I was assembling Sport Tens and doing add jobs. But, they gave me ten sets of Tange tubing, and set me loose. I borrowed a Ritchey frame, took it home, and tried to imagine how Tom did it… 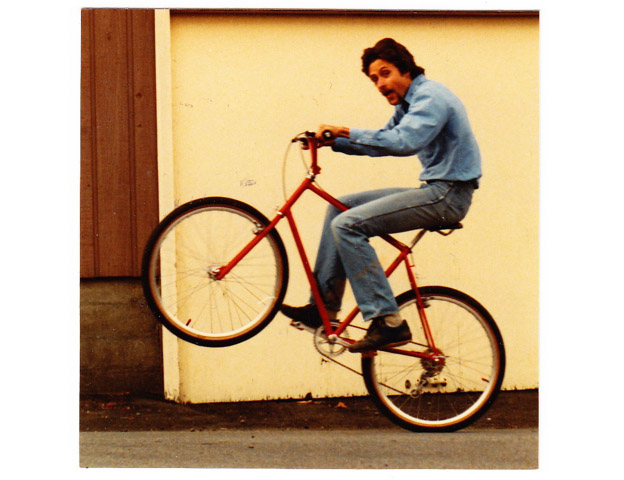 This is the first frame I made for Rocky. The lugs took forever, and every cable stop and braze-on had to be made as there were no suppliers in those days. It took over 30 hours to build the frame. Rocky liked what they saw, and I accepted a frame building position working full time, even though it went against my promise to never, EVER work for anyone else. I knew I would learn so much more… 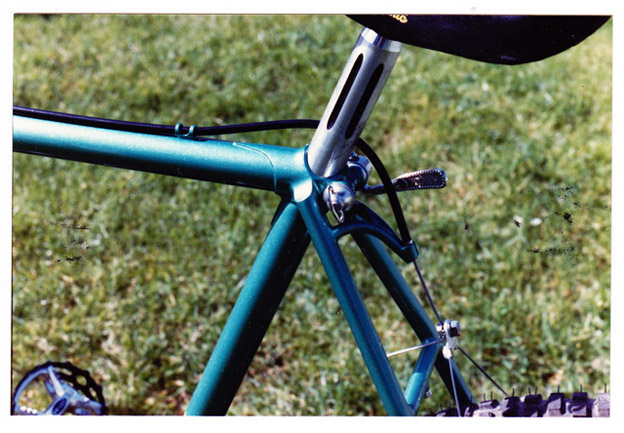 I continued making frames and forks, and became the Shop Supervisor, as Derek Bailey had no interest in that position. I was ordering supplies, building, painting, and shipping all for $8 / hour. I wanted a raise to $10 / hour, but Rocky said no. They said we weren’t making any money.

Derek Bailey was not an easy man to work with. Most of the time he was fine, but every so often he would go into a Black Mood. These moods would last three days, and he would work like a madman and refuse to speak to me. I could tolerate Day 1, but Day 2 and 3 were unbearable. He did this one time too many, so I quit my position as Shop Supervisor and went back to contract work. I also started working afternoon shift, which REALLY surprised him.. Derek Bailey did not expect that.  I had been Shop Supervisor for about one year.

I was now on contract, and receiving $200 per frame and fork. I could now focus on building while I planned my escape from Rocky. At the start of this year, a frame and fork would take me 16 hours, but by the end I had it down to 8 hours. I thought about every step of the process. I was also building my own jigs and fixtures; often using Rocky’s milling machine because I didn’t have my own yet. When I first decided to start my own business, Brodie Bikes, I figured it would take $4000 and 6 months to setup. I was wrong. It took $8000 and 12 months before I gave my resignation to Rocky. The letter said, “Dear Grayson, With regret, I hereby resign..”

And That, is the true story. Thanks for reading.

Well if that wasn’t a ride in the way-way-back machine! Paul Brodie’s first attempt at a mountain bike was a dumpstered road bike?!