Some of you may have seen our quick preview to Scott Bikes’ 2013 product launch. In that article I gave a brief introduction to the three new models that Scott is launching for 2013: the new Scott Gambler DH bike; the new Genius 900 series 29er trail bike; and the new Genius 700 series 650b / 27” trail bike. Below I’ll be covering my first impressions of the Genius 900 and the Genius 700 models.

ScottWeek in Sun Valley was a great experience. My stay coincided with the US National XC Championships, and as a result the town was buzzing with excitement. The trails in Sun Valley are ribbon-like single track, high speed, smooth, loose, and generally mellow in grade. I rode for 4 days straight and couldn’t get enough. It seems like everyone who works for Scott is sickeningly nice, super fit, and capable of shredding trail, who made excellent hosts and trail guides. The lift access trail in town is 17.3 km of buff single track, descends 1,000 vertical meters and took me 35 minutes to finish! The XC riding consisted of lung busting climbs into gorgeous Idaho alpine with endless views, and grin filled descents. Sun Valley proved to be the perfect playground to test out some new trail bikes.

There isn’t a bad view anywhere in Sun Valley. From this peak the only hint of human existence was the single track running beneath us.

Since the Genius 900 and 700 share a very similar chassis I thought it’d be easiest to cover all the common elements first. The Genius bikes will be available in a variety of price points ranging from full aluminium frames, to a hybrid carbon front triangle aluminium swing arm to a full carbon frame. Prices range from $3199 CDN / $3050 US on up to $9699 CDN / $8819 US depending on the model. The folks at Scott had a few goals for the new Genius: a major stiffness improvement over the old Genius; to reduce weight over the old Genius; and to offer the user geometry adjustments. 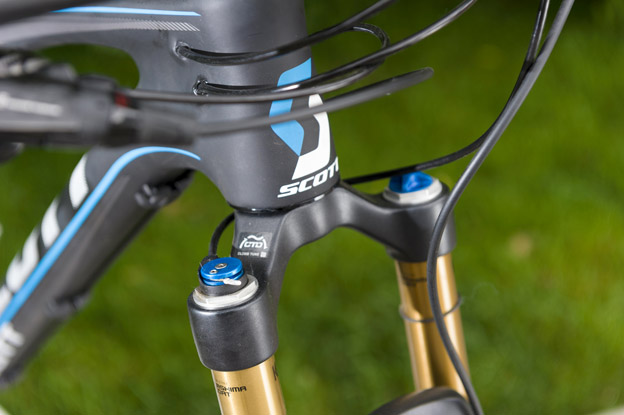 Through computer modeling and in house testing Scott claim that the new Genius frames are up to 20% stiffer than the previous model, which they admit was a bit flexy. In riding the carbon and aluminium bikes back to back I noticed the carbon was stiffer, but the aluminium version was still plenty stiff for aggressive riding. Everyone’s going to want to Gucci carbon versions, but ultimately the 1 pound heavier aluminium frames are still stiff and obscenely light. 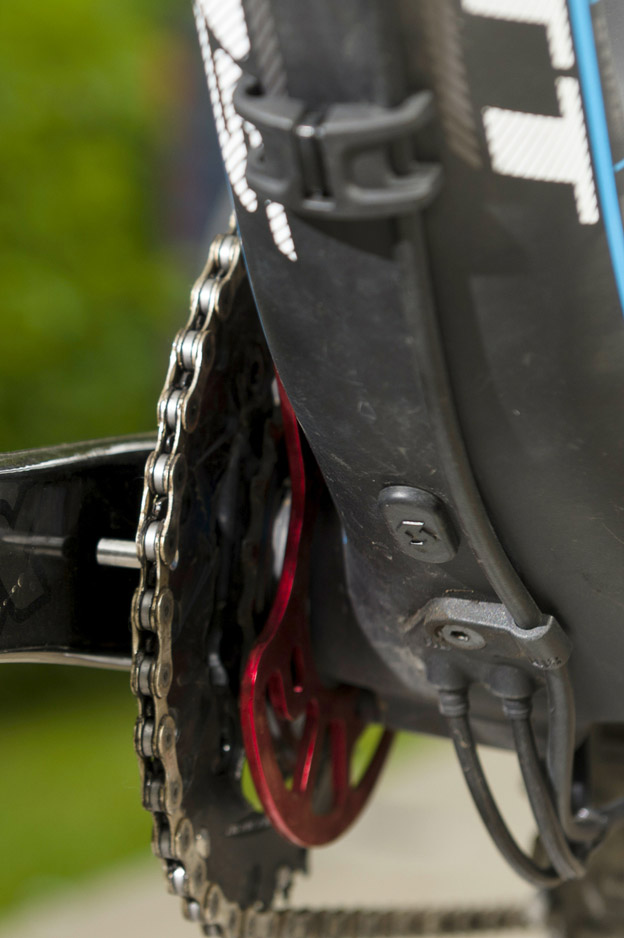 The internal routing exits the frame through this plastic piece. Hoses and cables are well secured on the Genius with dedicated plastic clips.

The 2013 Genius chassis reverts back to a standard dimension push shock, from the previous pull shock. All the Genius bikes for 2013 will come with custom tuned and built shocks from DT Swiss. The shock and fork are connected to Scott’s patented TwinLoc handlebar mounted control. TwinLoc offers the rider three distinct ride settings: lockout mode, climb / traverse mode and descend mode. The middle setting reduces the travel and increases the damping on all models except the entry level versions, which offer only an increase in damping.

The bikes I rode were equipped with LTD (Lockout – Traction – Descend), which is the travel and damping altering system. When I first heard about the TwinLoc system I thought it’d be a bit of a gimmick, but out on the trail I found myself using the TwinLoc control more than I’d thought. It was really handy to be able to quickly switch from an ascending mode to a descending mode without having to stop. It seems silly writing it, but I think I thought the same thing when I first heard about adjustable seat posts.

The Traction mode was beautifully judged by Scott and offered great support, produced excellent pedaling characteristics, and the reduction in suspension travel improved my miserable climbing technique. I thought the Descend mode was quite good as well, and should keep most folks happy. However I personally would have liked a slightly different compression tune. I think the major compromise with the TwinLoc system is the inability to adjust the compression damping on either the fork or the shock without some sort of a rebuild. 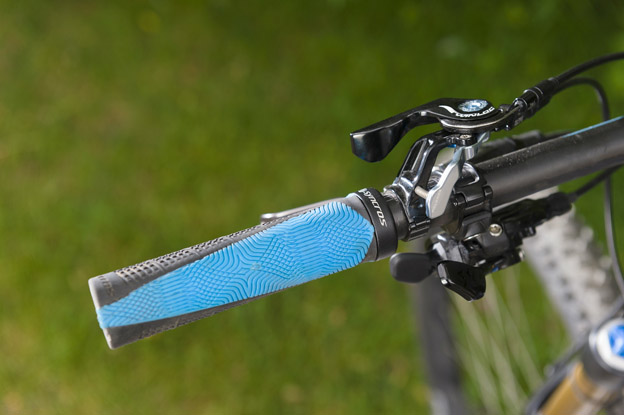 Scott’s TwinLoc remote lever controls both the travel and damping settings of the fork and shock.

Some frame details you may like are: ISCG tabs, an included “Chainblocker” that prevents chain suck, internal cable routing and flipchips-bro. The internal routing makes for a clean look and protects the cables. However changing a derailleur cable is a chore and appears to require the replacement of both derailleur cables at the same time. All the Genius models come with a flip chip; the “High” setting raises the bottom bracket by 6 mm and steepens the head angle by 0.4 degrees. It’s nice that the geometry adjustment is there, but all your friends will make fun you if you dare run it in the High / Steep setting. 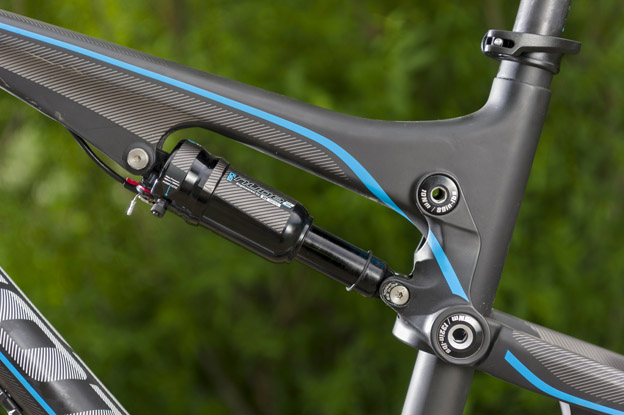 On the 2013 Genius Scott utilized a progressive leverage curve and a relatively low main pivot. A progressive leverage curve follows the current industry trend, and allows a more supple suspension at sag, but some ramp up as the wheel moves towards bottom out. The relatively low main pivot location was a clear decision by Scott to maximize pedaling efficiency, at the expense of bump compliance. This compromise was definitely noticed on the trail; the Genius bikes pedaled very well, but when descending the Genius bikes weren’t class leading in eating up rough sections. 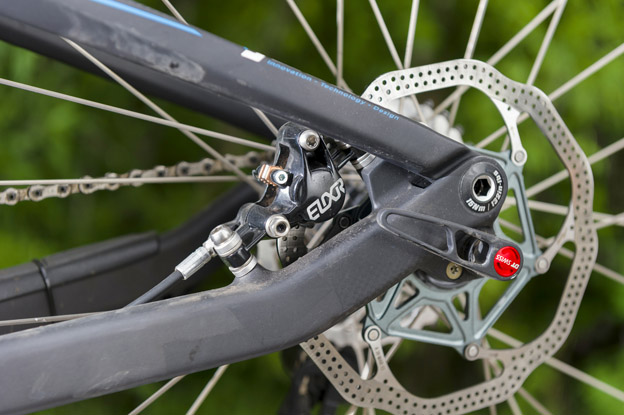 The rear brake is directly mounted to the swing arm eliminating the need for any brake adapters. With this layout some brake / suspension interaction was noticed under hard braking.

Scott wanted the new Genius to have 150 mm travel and large wheels, but figured they couldn’t build a 29er with 150 mm travel and acceptable geometry. So after some heavy duty maths the boffins at Scott sketched up the new Genius with 2 wheel sizes; a 130 mm travel 29er and a 150 mm travel 27” / 650b bike, both utilizing a similar looking frame. Supposedly 27” wheels will offer improved rolling characteristics while maintaining the geometry and handling benefits of a 26” bike. Scott is so convinced you’ll love the 27” bike they chose not to produce the new Genius in a 26” variant, but will continue to offer the 180 mm travel Genius LT. 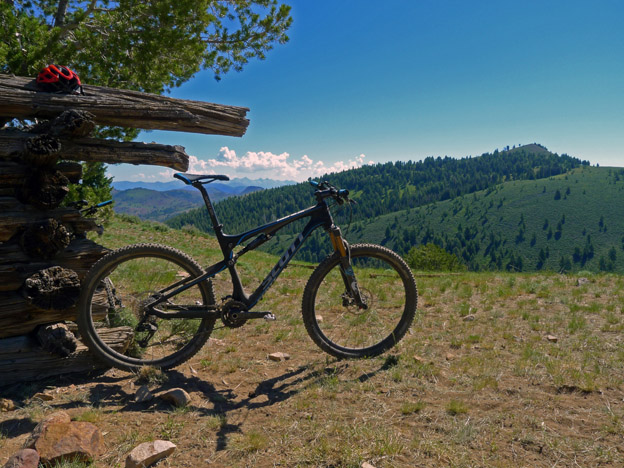 The carbon Genius 910 was a pleasure to pedal up into the Idaho alpine. Nat the Gravity product manager took Genius engineer Joe Higgins and I on this amazing ride. Nat and Joe were beasts on the bike; crushed the climb, and smashed the descent. 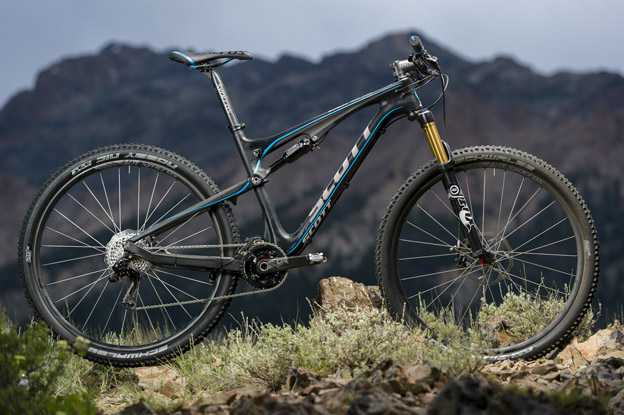 Straight up I’ll admit I’m not a big 29er fan. I’ve ridden a couple, and while I’ve realized they’re very effective at getting around a mountain, I’ve never really enjoyed the ride. I like hooning about when I ride, and I found 29ers were all business and no party. Ripping the Genius 900 series bikes in Sun Valley is easily the most fun I’ve had on a 29er, partly due to the high speed single track trails, but also partly due to the bike.

Once up to speed the Genius 900 held fantastic momentum, felt more nimble than other 29ers I’ve ridden, and I’m pleased to report was quite willing to let me slide in and out of corners. At slow speeds I did find the handling a bit lazy, and getting the front end up was substantially harder than I’m used to, but that’s par for the course on any 29er. I feel like 29er geometry is evolving, and the 900 Series Genius bikes are the culmination of what Scott has learned over the past few years. I won’t profess to be a 29er expert, but I did enjoy my saddle time on the Genius 900. 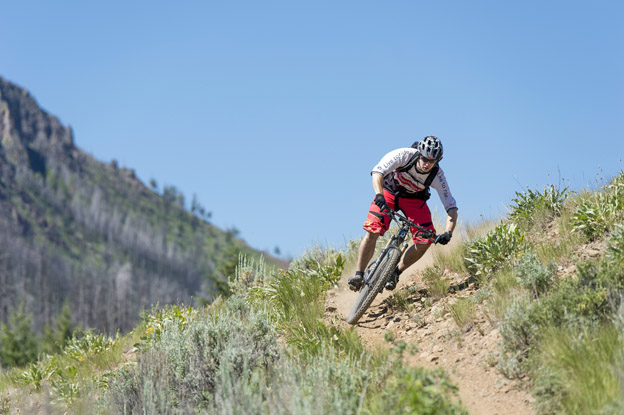 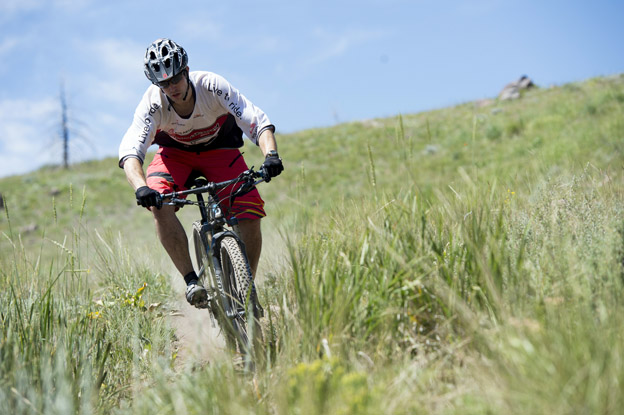 Big wheels floating over the rocks. 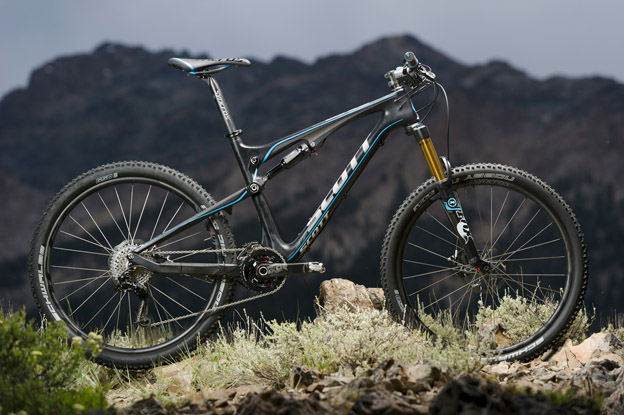 When I heard about 650b bikes on the bulletin boards I placed my head in my hands, bewildered and confused at the stupidity of yet another wheel size. What’s wrong with good old 26” wheels, they’ve worked for ages, what’d they ever do to you? Then I rode a 650b /27” bike and I ate a man size helping of humble pie. After riding my 26” bike back to back with the 27” bike I asked what horrible things I needed to do to get one. I was instantly at home on the Genius 700 bikes, and handling wise I may as well have been on a 26” bike. The back end is short and familiar, so snapping the bike through turns and manualing through sections was a breeze. I couldn’t wipe the smile off my face.

The Genius 700 wasn’t as efficient climbing as the Genius 900, but the bigger wheels did roll easier than I’m used to on my 26” bike. Quick tip, avoid the 2.35” x 650b Nobby Nic, I thought the side knobs were too flimsy and felt vague when leaned over. The 2.25” x 29” Nobby Nic was much better. The only downside I can see with the new 27.5” wheels is tire availability. However with an increasing number of 650b / 27.5” tire options becoming available I’m certain most folks will be able to find a tire that works well on their local trails. 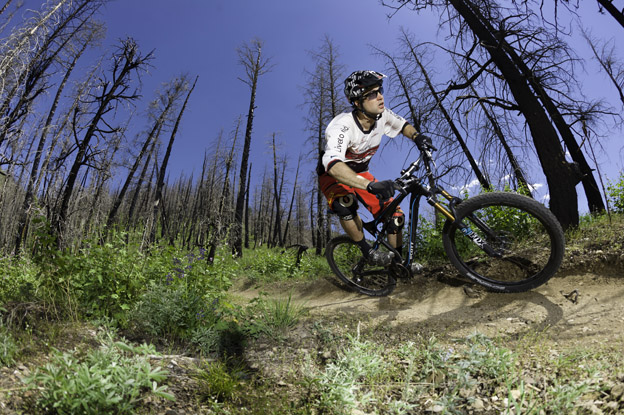 I felt at home shredding corners on the 27” wheels. This was a rough corner by Sun Valley standards. 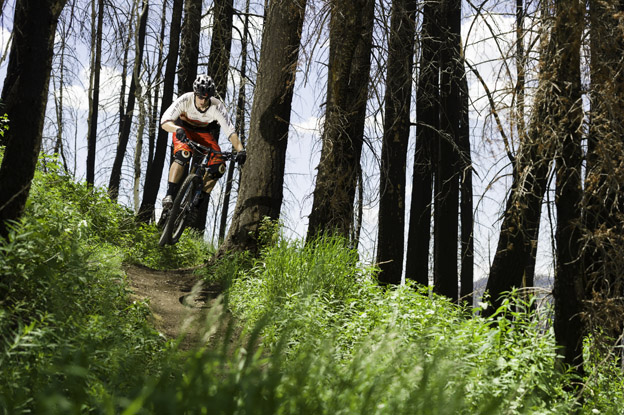 The Genius bikes are light and stiff, so getting them airborne took little effort.

Ultimately I thoroughly enjoyed the four days of riding in Sun Valley aboard the new Scott Genius bikes. Scott has made some brave decisions regarding the bike, which I think differentiates them from the current crop of trail bikes. On the positives the frames look great, are beautifully made, available in a wide range of price points, are mega light, stiff and impressively efficient when in Traction mode.

I think some riders will love the convenience of the TwinLoc system, but others will hate the lack of adjustable compression damping. The ultra light Genius bikes excelled on the buff, high speed trails of Sun Valley and kept me comfortable even when pinning down completely unknown trails. That said there was no truly rough or technical trails and I’d love to ride the new Genius bikes on my local trails to give them a more thorough thrashing evaluation.

The Genius 900 was a pleasure to pedal around all day, but as a whole I preferred my time on the Genius 700 bikes. I felt the 27” wheels didn’t give up that much in the pedalling department and rewarded the extra climbing effort with more giggles on the descent. I’ve ridden a couple 650b / 27.5” bikes this year and been impressed with all of them. I’d urge anyone looking for a new trail bike next year to check out the new Genius bikes, and particularly the goofy new wheel size. 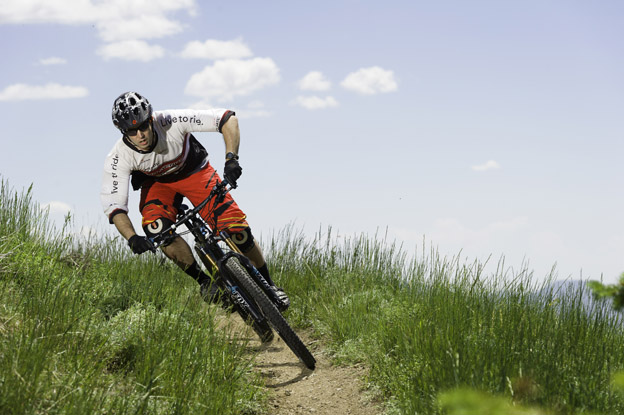 SCOTT isn’t the only company walking away from the 26″ wheel on certain platforms… have you been wooed by a long travel big wheeler yet?