Silver Star has returned to the race scene; the course has been destroyed, the riders are headed home and the trail crew is back to work. Setting the bar for the BC Cup season with the largest attendance overall and the largest Elite men division so far was just a hint that everyone had been waiting a long time for The Star to return to the race scene.

A couple tricky sections on the course…

With almost 340 racers it sure was a perk to have a chairlift running racers up to the start gate.  Racers started showing up early in the week to beat the crowds and learn the course. By Friday the campground was filling up, and the racetrack – Dag’s DH – was starting to get busy. Unfortunately a thunderstorm rolled through Friday evening shutting the lift down for a couple hours, but in the end it was good to see a little rain knock down the dust and make the course nice and tacky for Saturday’s official training day. 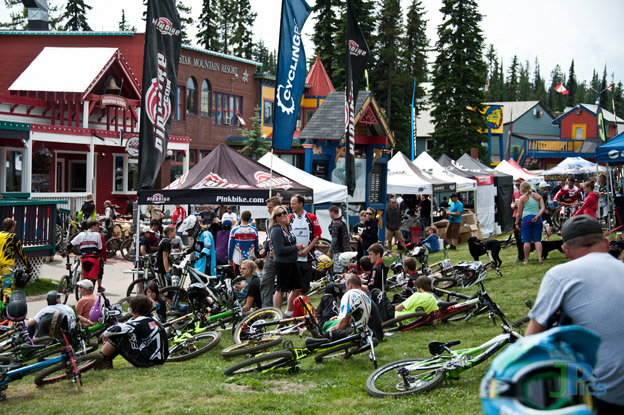 The village was full of tents, new products and people all weekend. 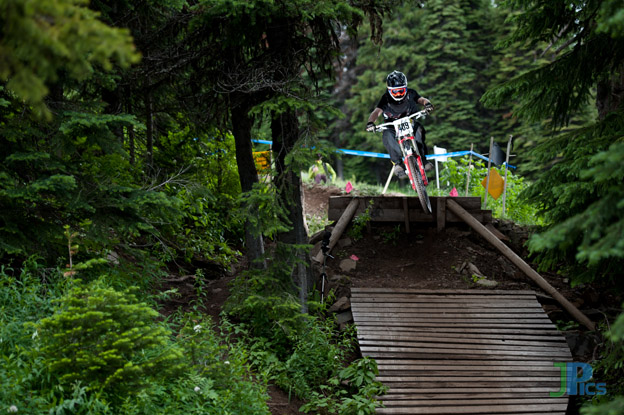 Lined up for landing on “Baby Step”. 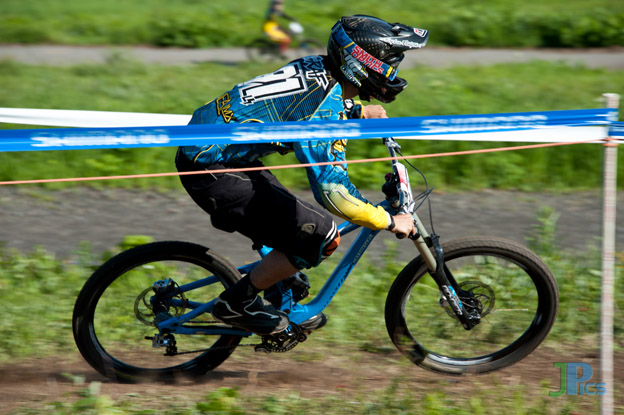 Saturday was greeted with blue skies and perfect temperatures for riding. The course was freshly watered and it was time to really learn the track. Once 10am hit, the gates were dropped and it was a Chinese downhill from the village to the bottom of the chairlift. Even having a high speed 6-person chairlift (only 4 bikes/chair), the lift lines got crazy!  Patrol was called in to do some traffic control and to shut down the last couple berms on the trail as the lift lines were right to them and needed a slight re-route.  Even with huge lines all of the racers were still able to get adequate training and find all of the new lines that formed throughout the day. By the end of the day the course had transformed with bomb holes popping up, small tire ruts in corners and a mixture of tackiness and dust. 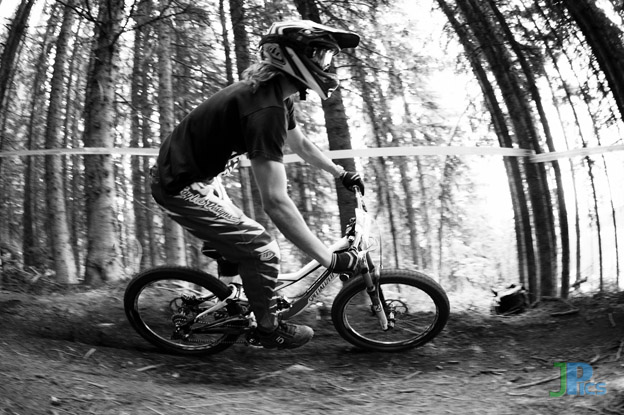 Cruising through the last forest section. 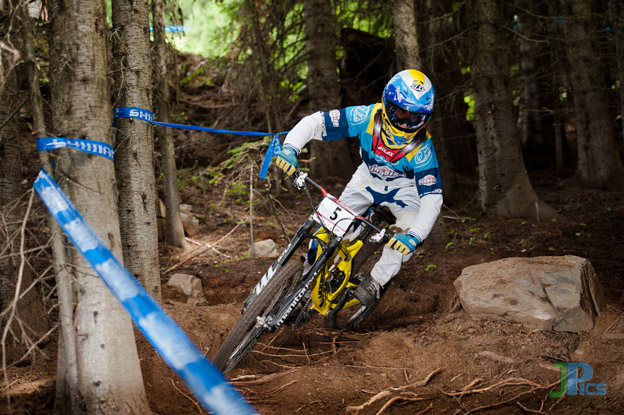 Finding the way through the loam.

Once training was wrapped up, it was time to see who could get sideways with a Whip Off contest on the new finish jump. The jump was sessioned for about an hour with Brett Tippie handing out money as he saw fit! In the end of it all Forrest Riesco was crowned Mr. Whip and won himself a new Kali Helmet. 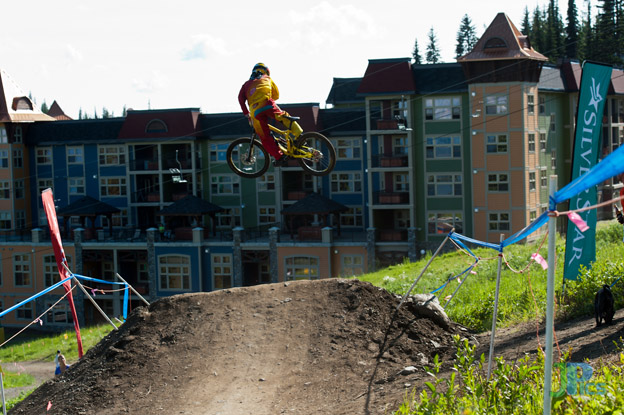 “Whip It” The new jump to send into the village. 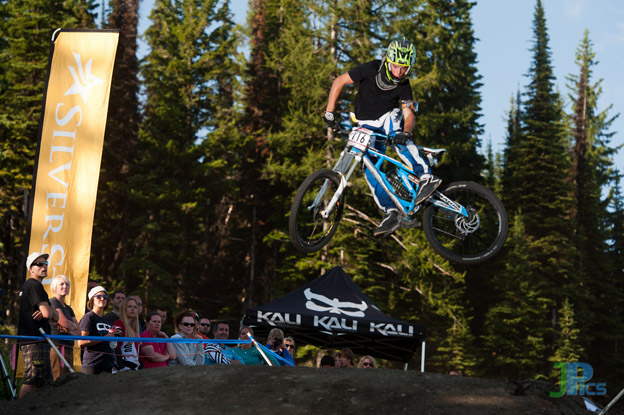 Getting sideways for Saturday evening’s Whip Off! 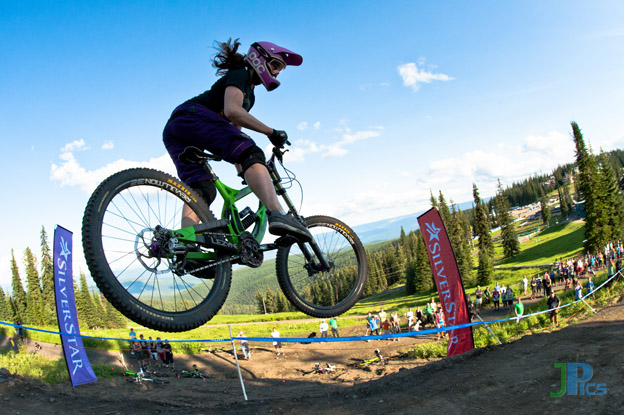 Trish was the only female to take air in the Whip Off, and she sure showed to boys how to get sideways!

After a good night of rest it was time to get stoked for the main event. There were a couple hours of training in the morning to see how the track fared through Saturday’s training, and then at 12:30pm Barb Haley hit the course as the only hardtailer to persevere the rugged track – way to go Barb! One by one, racers were coming through the finish section as the crowds grew larger and louder (thanks to all the cow bells handed out). With a few good bails off the jump, even more in the flat corners, and some spectacular drifts, the last two corners and main jump were great spectator points. 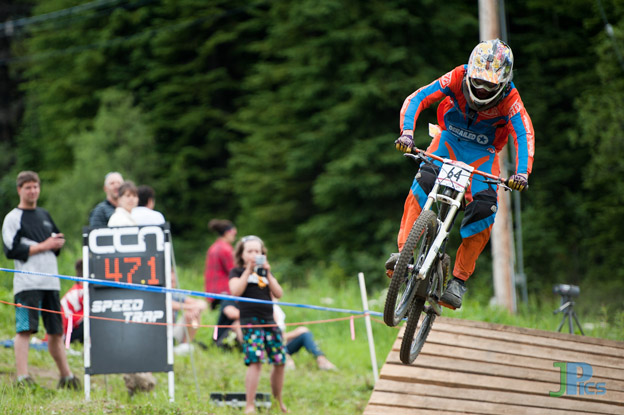 The CCN speed trap was live at the final jump with it topping out around 55km/h! 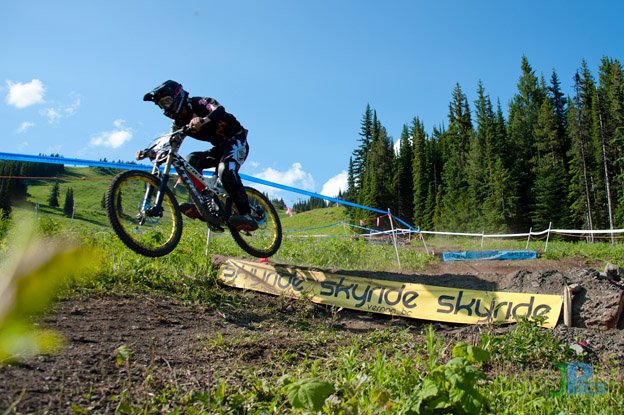 These corners were a love/hate kind of thing. In the end, almost everyone enjoyed the challenge.

As the race came down to the final few categories, Mark Wallace in Junior Expert Men came through the finish line to take over the hot seat with a time of 3:05:01. Mark was sitting there right ‘til the end and held on to top time of the day once all the racers were off the course. The weather for the race was perfect, good temperature with sun and clouds. This was up until there were about 5 racers left at the top in the Elite Men category. Then the sky started to rumble, there was lightning in the nearby area and the rain came in a hurry. This may have helped out the dust on the upper portions of the track but hindered the lower half in the forest with wet roots making it difficult for the remaining riders to post top times. In the end, that is racing and everyone was stoked with Silver Star’s return to the circuit! 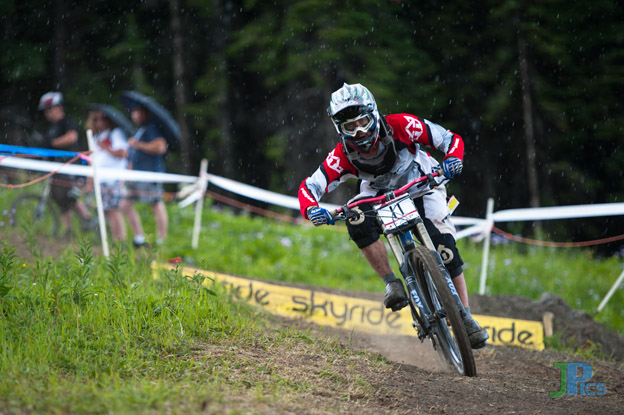 Rob Chapman was one of few riders who had to hold on through the flat corners in the rain. 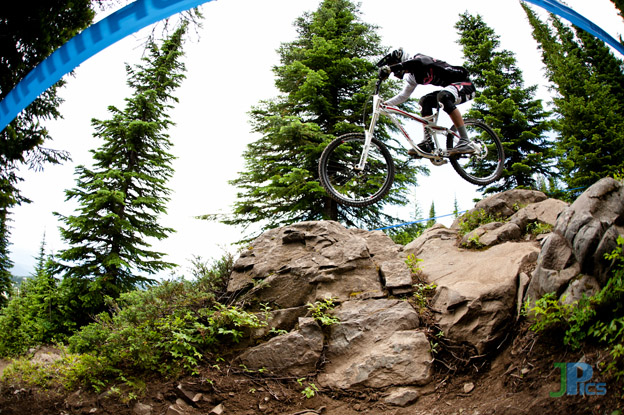 Nick Geddes showing how to top the podium. 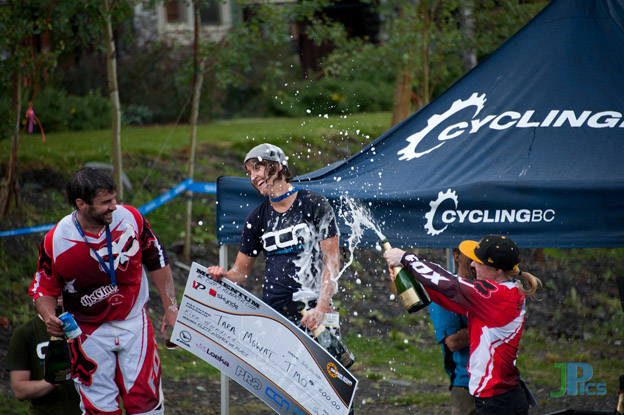 The Perks of taking home the cash for Tara Mowat. 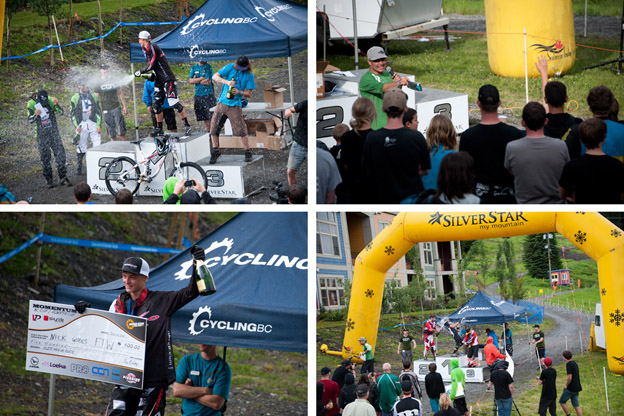 Brett Tippie was around all weekend handing out swag, awards and providing an all-around good time! 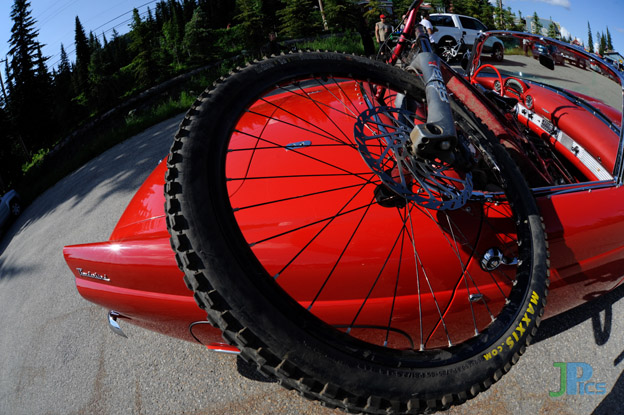 A big thanks to all the racers, moms and dads for getting their kids to the race, volunteers, Silver Star staff, Stephan Exley the race organizer, and all the sponsors for creating an amazing event that will be sure to stay on the race circuit for years to come.
Check out the full results at CyclingBC HERE.
Keep the rubber side down,
Jason Martin, JPics Photography
Thanks to:
Silver Star Mountain Resort
Skyride Cycle

Looked like the weekend at Silver Star was not without drama! Were you one of the 350 racers, or did you go fast somewhere else this weekend?