I Put a Brooks Saddle on My Mountain Bike

I put a Brooks Saddle on my Mountain Bike

Why would you put a Brooks Saddle on your Mountain Bike?

Indeed. Well, it started with my city bike project. As I was looking to build a modern interpretation of an English 3-speed racer, what else could I possibly do? An Italian sportscar isn’t legitimate if it isn’t bright red. A grand tour isn’t complete without a doping scandal, a few suspensions and a couple of multi-year court appeals. An English 3-speed racer isn’t authentic without a Brooks Saddle. Accept it.

So, after going to all the trouble of tracking down the distributor and setting up an account, it seemed ludicrous to just order one seat for my prototype bicycle. So I ordered two seats and put one on my mountain bike.

The Brooks was the cherry on top of Dave’s one-off Lumberjack city bike prototype, but was it the right choice for his hardtail?

Of course there is more to it than that. I’ve long been a fan of the Brooks saddle. The more I read about them, the more enamoured I have become. Go check out the website. Read about their history. Read about how these things are made. Check out the spare parts list. Spare rivets! We are a part of a disposable cycling culture. I own underwear that I’ve had longer than some of my bikes. New parts are current for about 6 months. There just aren’t many parts that will follow you from one bicycle to the next. I have a newfound appreciation for the few that can.

Back to first impressions. My absolute first impression was the box that the saddles showed up in. What a beautiful box. I would have snapped a few photographs but then I’m really just one step away from becoming one of those Apple fanboys that posts 30 pictures of himself opening his latest gizmo. I don’t want that. Let’s just say it’s a nice box. It inspires confidence. It included a wrench for tensioning your new saddle and a cover to keep the rain off.

Then, you pull the saddle out of the box. You hold it in your hands. It’s just solid. It smells nice. It feels like a well made object that will last an incredibly long time. It’s smooth and it’s stiff. Look at those rivets. Look at the little strip where the leather is cut back. It’s beautiful.

And then you bolt it to your bicycle. And it becomes a part of your bicycle. There’s just no flex. You grab the seat and it’s like your bicycle and your seatpost and your seat have merged into one. They have a complete and total understanding of one another. What you once thought was solid you realize was not. Everything is different now. 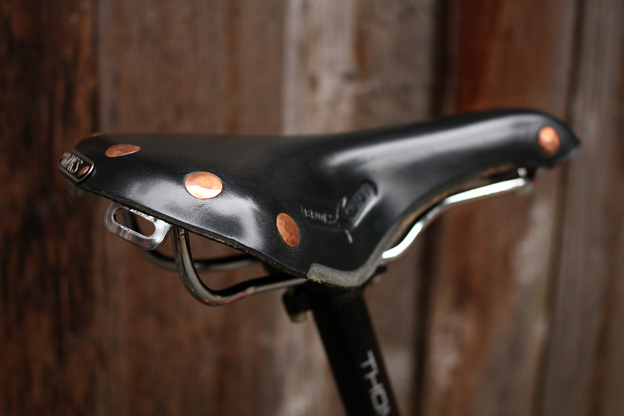 The leathery, coppery, silky smooth Brooks – that is, until you get it between your legs…

With this new saddle comes new responsibilities. So, hold off on that first ride. Like a Japanese Tamagotchi, your new saddle requires some care and feeding. Spread a little Proofide on there. Leave it for a while. Wipe it off. Now you can go ride.

HOLY MOTHER OF GOD! That’s a hard saddle. You say you like your saddle a little nose up? Ya, not any more. Nose down? Yes, that is a fine attempt at humour. No, you will now spend the next 20 minutes or so making sure your saddle is absolutely dead straight and level. Any inconsistency will cause you either incredible amounts of pain and suffering (nose high) or remind you of that time you tried to sit on that polished marble slab and kept falling off (nose down). Keep it level.
As well, you will gain a newfound awareness of where your ass is at all times. You will spend this first ride attempting to place your ass in exactly the right position. No further back. No further forward. It just doesn’t work that way any longer. The wrong spot is a hard and unforgiving place. The right spot is a nice little leather hammock.

Why are my feet tingling? Why do my testicles feel strange? Will I be able to father children? No wonder the British are so well known for their lack of fertility. They’re not known for that? Oh. You’re right. It’s bad teeth. My mistake.

You will finish that ride and understand what they mean by “break-in period”. You will wonder if it has all been worth it. You may become depressed, enjoy sitting in darkened rooms and avoid social contact. It’s only for a few days though. It will pass. The bruises on your thighs will go away.

Eventually, you will ride again. 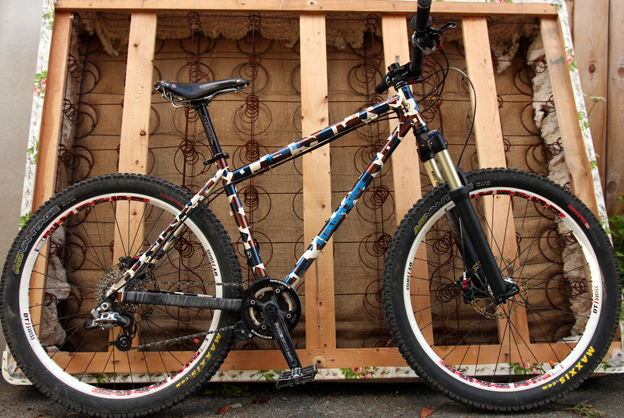 If you told me you’d found a bike that matched the bottom of a rusty boxspring, I wouldn’t have believed you… until now. Dave’s Lumberjack Rented Mule does a great job of blending in.

The next few rides

Okay. So it’s not so bad. Your callus is evolving. Your thighs have healed. You’re a puppy. You pooped on the floor. Your master corrected you. You were afraid for a while, but you’re ready to learn. You ride again.

It’s only been a ride or two, but things feel better. You rode that other bike…the one with the lesser saddle. It’s no longer bed of pillows vs. bed of nails. It’s more like…I don’t know…single ply vs. double ply. You can feel the difference but it’s not a huge deal and you feel good about the sacrifice. Yes, it’s exactly like that.

You like this saddle. Sure, it’s not as beautiful as it was when it was new. Little scratches leave a marked impression on the smooth leather. It doesn’t like the rain very much. You’re worried that those tabs on the back are going to rip open your spleen if you crash incorrectly. But these are trade-offs that you can deal with. Your saddle is better than everyone else’s. It probably cost more. It certainly required more of a commitment and proves that you are a true man/woman. It’s tougher. Prettier. It’s just better. They just need to deal with it. 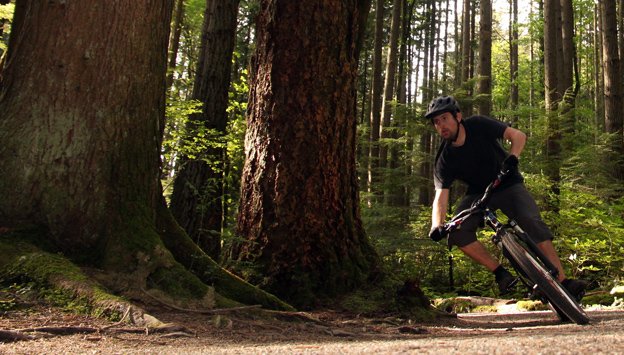 So, what are your thoughts about the Brooks? Have you ridden one? On a mountain bike, even? Intrigued a little bit? Whip that ass into shape below…