Sometimes there is no right or wrong answer but plenty of room for discussion. Poking The Bear is a medium for questions to be asked and opinions given or sought. The bear in question could be industry decisions, forum ranters, or even the media. Call us devil’s advocates or trouble makers, but sometimes it pays to ask – even if the little voice in our heads tells us not to.

Radical changes to the way we think about bikes are often hard to swallow, but without them we wouldn’t be at the point we are now in terms of design and technology. Traditionalist stalwarts may complain and those with aesthetic sensitivities may be offended, but at the end of the day the way a bike performs is its true test: if an ugly design is successful, it will soon become less ugly.

Here in BC, many riders would like to take credit for pioneering the wide bar, short stem, long top tube combination that has become the accepted norm. It is now common knowledge that a longer wheelbase and short stem is a more stable platform, but can that idea be taken too far?

The low offset stem idea has been floating around on Mondraker team bikes since early 2011, and is seeing success under Damien Spagnolo and Emmeline Ragot on the World Cup DH circuit – but Mondraker’s 2012 production Summum Pro Team still sees a 50mm stem from the factory. In the DH arena – where 50mm stems are at the long end of normal and 35mm is not uncommon – shortening the stem reach to 10mm does not represent as large a jump as it would on a bike that might host a 70mm stem. 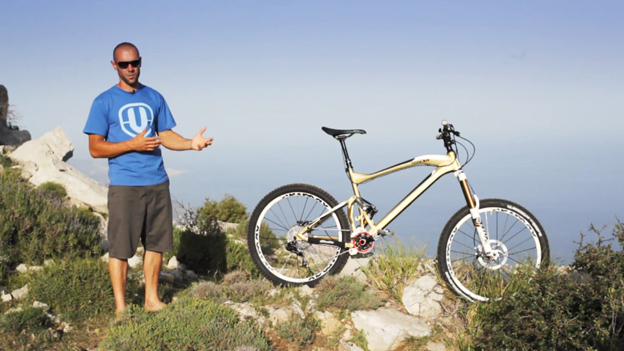 Following experiments with their DH racers for the past two seasons, Mondraker is moving forward with plans to introduce a 10mm stem “FG series” on their 140mm Foxy platform as well as the 120mm Factor, the 160mm Dune, and their DH bike, the Summum. Creating Mondraker’s Forward Geometry isn’t quite as simple as extending the top tube. As you can see, the zero offset stem necessarily increases stack height as the bar has to be mounted above the steerer tube rather than in front of it. As a result, the already-dipped top tube of the Foxy becomes even more pronounced.

The basic idea is to extend the top tube and shorten the stem, increasing front-centre measurement and, in effect, the bike’s stability. Where this week’s news marks a change is in the application of the zero-offset stem to the production short travel arena. Enter the 2013 Mondraker Foxy RS. In order to accommodate the 10mm offset stem, the 140mm travel frame’s top tube has been extended by a whopping 60mm (ref: Mondraker PDF). The first thing you’ll think is “whoa, that looks weird.”

Fabien Barel’s video below gets at the basic ideas and marketing behind the Forward Geometry concept, but avoids talking about the particulars – and something does look odd. While you might expect a lower riser bar to compensate for the stem mounted on top of the steerer, we in fact see a relatively high rise bar on both Fabien’s bike and the studio model. 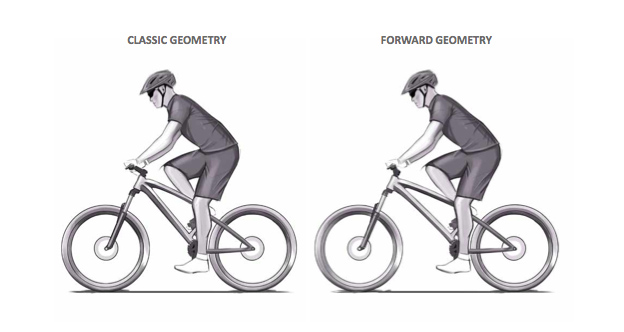 Mondraker claims riding position is maintained, while front-centre measurement (as a result of a dramatically shorter stem and longer top tube) is the only change. Is it possible to maintain rider position with such a change in the cockpit?

It is likely that Mondraker has shortened the head tube length on the Forward Geometry 2013 Foxy RS, but a head tube can to be about 100mm at the shortest for strength purposes and it’s unlikely they could shorten the existing tube by enough to offset the stem rise. We’ve already seen problems with front end height for smaller riders on long travel 29ers; is the 10mm offset stem going to create a similar problem? 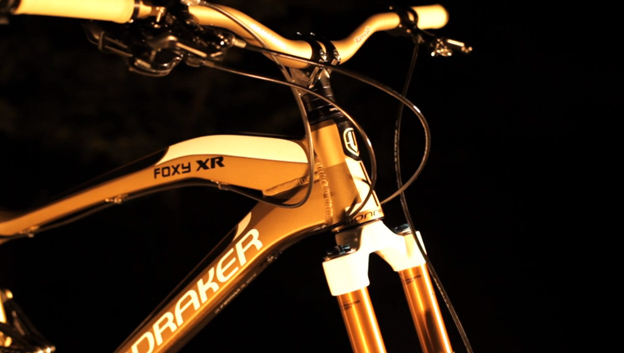 In order to compensate for a change in bar height, we would normally see a company spec a lower-rise bar – for instance, the higher stack height of a 29er sees flat bars and negative rise stems on most bikes. With the stem on top of the steerer tube, the bar height on Mondraker’s Forward Geometry frames looks to be quite high regardless of what bar is chosen.

So, while we are being told that rider position remains exactly the same and only front-centre measurement changes, I’m not certain this is the case. Fabien goes on about better weighting the front wheel, but with a longer front-centre and higher bar, an entirely different scenario plays out in my mind. At the very least, there would have to be a change in suspension setup to accommodate the rider’s more rear-biased position. We’ll reserve judgment for now, but we want to hear from the armchair engineers.

Putting aside aesthetic sensibilities and traditionalist rhetoric, what are your thoughts on Mondraker’s push to put the 10mm stem on their production bikes? Are we yet again moving in a direction that motorized two wheelers have already pioneered, or are we going too far? Sound off below…