I’m down in Snowbird, Utah for the Specialized 2013 global product launch. Day 1 has wrapped up, we’ve been inundated with new bikes, new gear and specs galore. Oh yeah, and we also spent a few hours riding this afternoon. I’ll have a full report on everything I’ve seen and ridden in the next week or so, but for now, I’m going to post a few teaser shots of one of the untold stories from this launch: the 2013 Enduro. 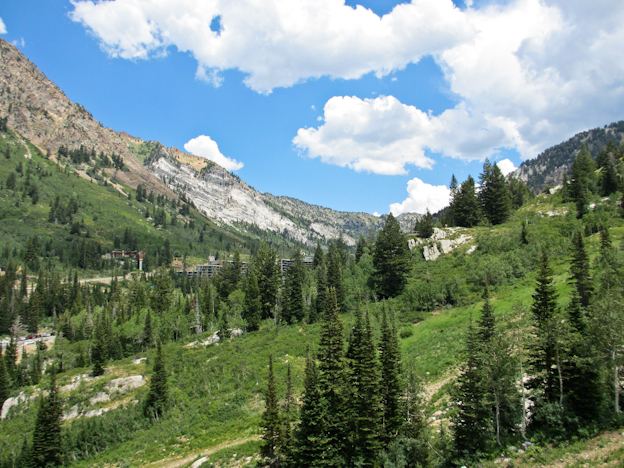 Snowbird Resort, about an hour southeast of Salt Lake City, isn’t a bad place to spend a week.The resort buildings are just left of centre in the photo.

The new Enduro is more of a refinement of an existing platform than a re-imagining, with the goal of making the all-mountain experience even more enjoyable. Bottom bracket height, chainstay length and heat tube angle stay the same, while rear travel increases to 165mm for 2013 and the suspension has been tweaked to make it more efficient. There’s a coil-sprung EVO model with 180mm of travel, as well as a 100mm Enduro SX slalom race frame available. All frames also come with internal cable routing for a dropper post.

There have also been a few notable spec changes. The top-of-the-line S-Works model comes with a Cane Creek Double Barrel Air shock, as well as SRAM’s new XX1 1 x 11 drivetrain. Most models come with Fox’s new 34mm stanchion, 160mm travel forks, which have 15mm axles; the full article will have the complete spec run-down.

At this point in time, release date for new Enduros is looking like September, but that may shift. Pricing is even more up in the air. I’m hoping to have both of those things plus weights in the full write-up, so stay tuned for that. In the meantime, enjoy the photos and a few details to accompany the shots. 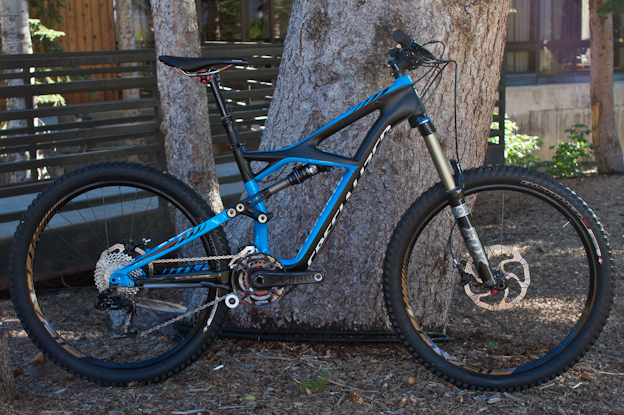 The 2013 Specialized Enduro Expert. The carbon frame uses the same X-wing frame design as the last-generation Enduro, with some refinements. 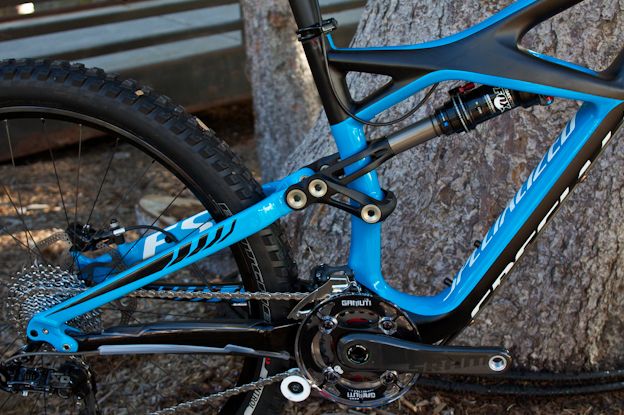 There are several things going on here. Starting at the back, there’s an internal sleeve for the rear derailleur cable as well as integrated padding on top of the chainstay. Specialized moved the pivots at the seat stay / seat tube junction – which they refer to as the Six Pack – to improve kinematics and reduce mid-travel wallow. The cable above the rear shock is for the Command Post Blacklite, which will be spec’d on higher-end models. All Enduro frames also have water bottle mounts. 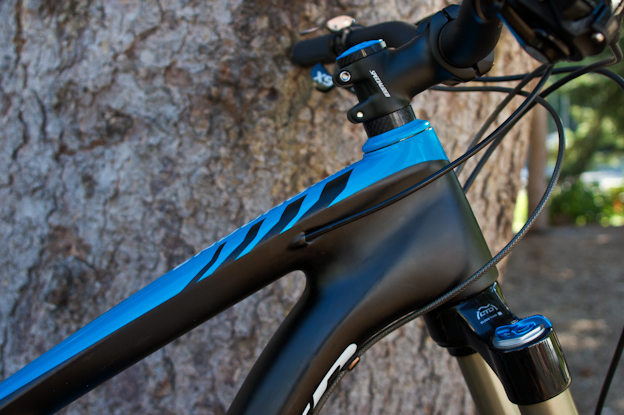 The internal cable routing for height-adjustable posts is a nice touch, and comes standard on all Enduros. 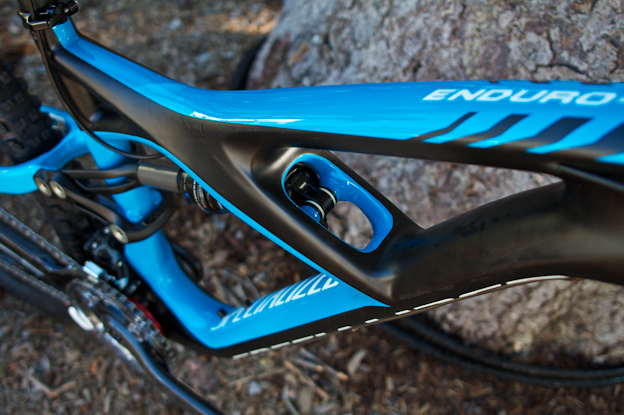 A close-up of the forward shock mount on the carbon Enduro. The lines on this bike are gorgeous. 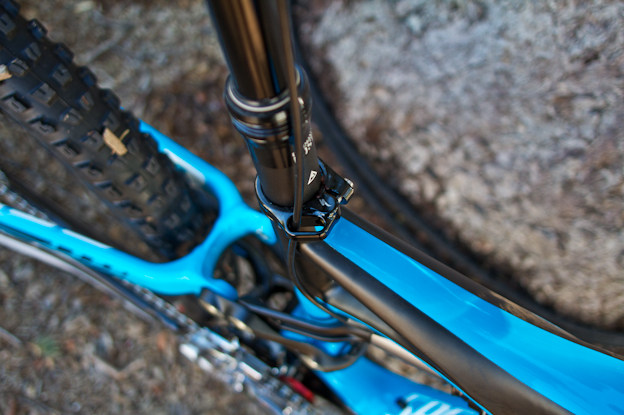 Specialized has come up with a really cool way of keeping the cable for dropper posts in check: a forged seat clamp with a built-in loop that the cable runs through. Very clever. 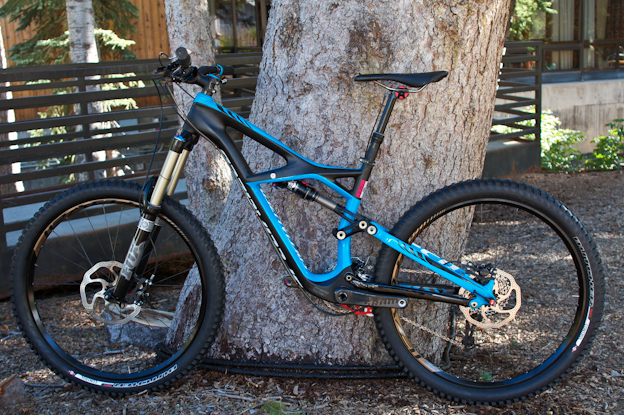 The other side of the Enduro Expert. Notice how large the down tube / seat tube / bottom bracket junction is. All that carbon makes for a very stiff frame. 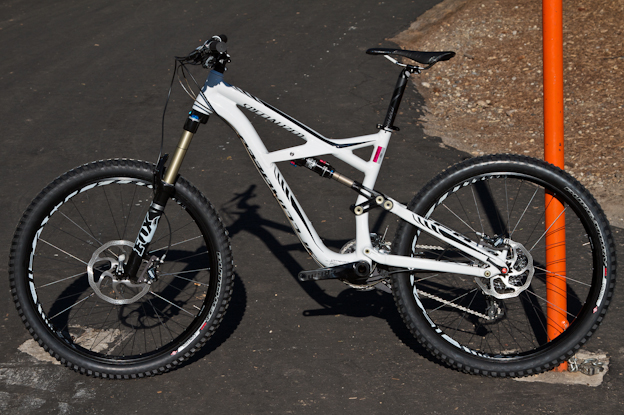 The aluminum Enduro Comp is basically a down-spec version of the carbon Expert. Same travel front and rear, same frame geometry and pivot placement, but without the fancy parts and correspondingly steeper price tag. 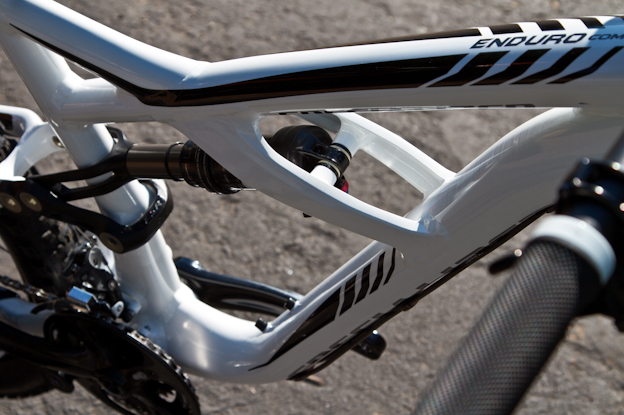 Not surprisingly, the front shock mount on the aluminum frame is a little different than the one on the carbon frame. 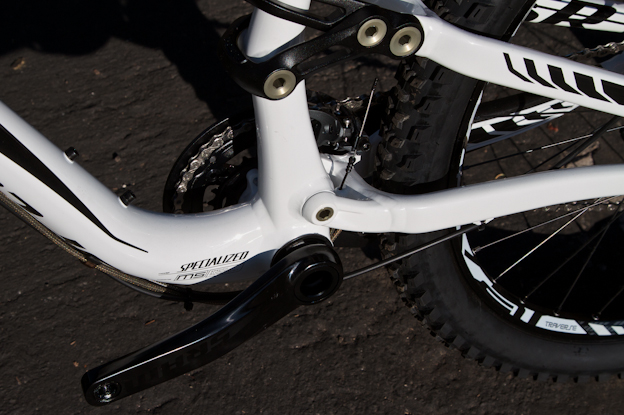 The down tube / seat tube / bottom bracket junction on the aluminum Enduro isn’t quite as large as its carbon sibling. Note how the front derailleur cable comes through the yoke behind the bottom bracket. 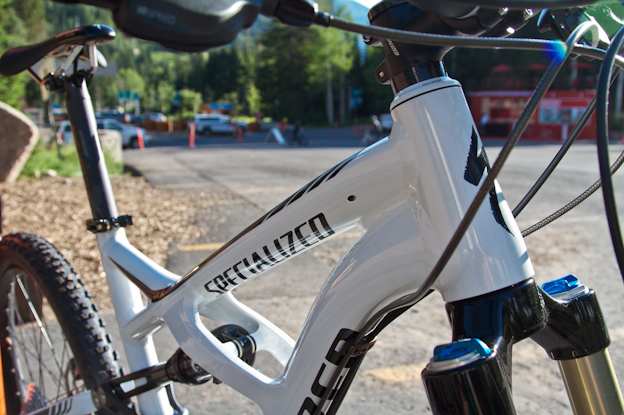 A close-up of the head tube on the aluminum Enduro Comp. Tapered head tube, down tube cable routing, and the hole near the front of the top tube for internal dropper post cable routing. 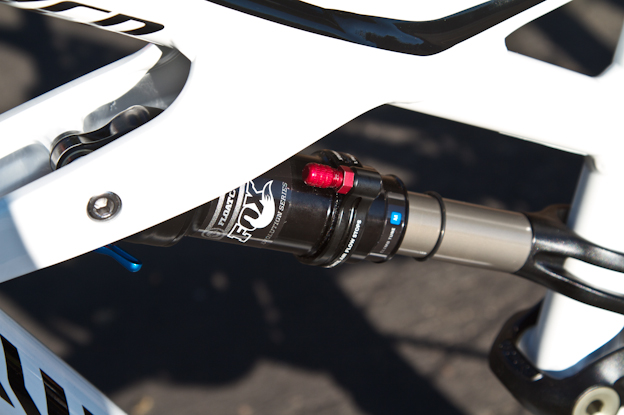 A close-up of the AutoSag feature (red cap), which appears on many new Specialized bikes. Add air until you’re about 10% over body weight, hop on, unscrew the AutoSag cap, push the valve stem and it automatically settles at the correct sag for your weight. That equates to approximately 25% sag, depending on the bike’s rear travel.

The new Enduro gets more travel, some nice refinements, and an updated look. The current Enduro is a Shore shredder… could the 2013 edition find a home in your garage?

There were a number of questions posted on the board about the wisdom of spec’ing a Fox 34 fork instead of a Fox 36 on the Enduros, so I figured that I should go directly to the source for the answer. And the source is Brandon Sloan, Director of the High-end Mountain Group at Specialized. Here’s what he had to say:

“We used the 34mm fork for weight. I can see some of your readers a little nervous considering the terrain on the Shore, but they should give a 34 a try before dismissing it. ‘Smaller’ bikes are more capable while ‘bigger’ bikes are more efficient than ever. We like to think we got the balance right with the new Enduro. Hopefully your readers will agree when they get a chance to ride the bike.”

I also reached out to Mark Jordan, Marketing Manager at Fox (formerly Fox Racing Shox), to get official weights so people can see how much weight we’re talking about. He also made a point of noting that “[t]he 34 160 was built to fit in between the 32 and the 34, so the crown is modeled after the 36 but the lowers/axle from the 32.” Here are the hard numbers from Mark:

Weights for comparable travel forks are as follows:

Mark’s numbers clearly support Brandon’s assertion that the fork is lighter. Brandon’s also been spec’ing bikes (as well as riding the Shore and Whistler) for quite a while now, so I’m willing to give him the benefit of the doubt. We’ll try and line up a test of a new Enduro with a 34mm fork to do our own torture testing, and see whether (or not) the numbers hold up to real-world riding conditions in BC. You know where to stay tuned for the full story.