As I mentioned in my first piece (which can be found here) I was kindly invited by the folks at the Jamaica Tourist Board and SMORBA to shoot video for the Jamaica Fat Tyre Festival. A week of bikes, beaches and beer is a hard offer to pass up.

The House of Payne (Andreas Hestler, Dean Payne and Darren Butler) take a gander into the Caribbean Sea atop Pimento Hill. This was, in my opinion, the most stunning view of the trip.

It was in the Blue Mountains during the Ken Klowak Memorial Ride when Dean Payne took the words right out of my mouth. “This is better than Whistler,” he said after we had just rode the first of what was a multi-million dollar network of trails. Now, if you are on the Whistler-sucks-wagon, replace ‘Whistler’ with your favourite place in the world to ride your bike and you’ll understand what I’m getting at. But I think you get the point. 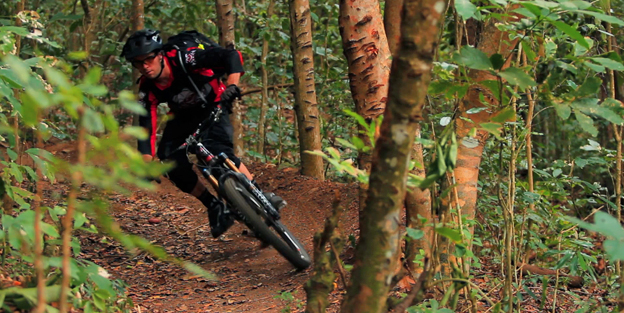 There are berms in Jamaica. Very. Nice. Berms. This one was on the famed Carlton Pass trail if I’m not mistaken.

The riding in Jamaica is very impressive to say the least. On one end of the spectrum, you can ride unmaintained trails that run through backyards and along water mains. On the other end, you’ll find trails so buff and so well designed that I am convinced the bike gods descended from bike heaven to build them themselves. Even then, its arguable which side of the spectrum is better.

It’s not just the trails however, that makes the riding so incredible–it’s the culture, the people and everything else that ties in together to create the experience. Andy Giles and Jonathon Gosse, who plan and organize the festival, have put together something that will make you say “this is the best day of my life.” Maybe more than once.

If you wind up in someones backyard on the Shore you might get an angry Frog Lady chasing after you. In Jamaica you might just get a group of young lads dancing and cheering in excitement. These kids were playing some ball and jamming to some Justin Bieber on a radio before we rolled through. Note the water main on the left.

I want to go back.

As we stopped to shoot an awesome natural wallride on Carlton Pass, we encountered a few young Jamaican boys hiking up the trail as they snacked on mangos. Certain sections of this trail were scattered with hundreds of ripe mangos. It was almost depressing to ride over them. I miss being able to wake up in the morning, step outside the door and pick up a fresh mango off the ground. Can you grow a mango tree in Vancouver?

Matt’s got some more stuff from Jamaica coming shortly–including a bike review of the Norco Sight with a Jamaican twist. Leave some love below, Mon!