On Friday NSMB.com published Wheel Wars I, a brief overview of some of the new wheel size offerings, prototypes, products and perspectives on the practical implications of an ever-expanding wheel size catalogue.

Rumors and speculation have abound on the internet about the introduction of another wheel size – 650b or 27.5” – but at this yearÊ¼s Sea Otter, concrete evidence of its widespread adoption surfaced. It was not unsurprising to see some 650b product in the booths but, more interesting, that there was quite a lot of talk by component manufacturers about this new standard. We decided to ask around to ï¬nd out what people of inï¬‚uence actually think. With pen in hand we set about wandering the grounds of Sea Otter asking battle-hardened industry personnel and the average rider on the trails what their opinions were about the growing number of wheel sizes.

The following is not an entirely objective or fully representative selection of opinions, as we gave preference to people whom we could be sure to give eloquent and thought-provoking personal opinions on the most recent front in the wheel size war. We would admit to being unable to have predicted the responses that people gave, but some of their answers are interesting indeed.

A standard – in mechanical, scientiï¬c or production terms – relates to sets or systems of universally accepted norms, measurements, or models. Based on this deï¬nition, the plethora of “standards” in mountain biking might seem a oxymoron, especially if we look at the variety of standards in wheel sizes. However, they really are all standards. 26” and 650b are both standardized yardsticks, 25mm apart in diameter.

Just imagine if every wheel builder made wheels different sizes each time they built them; how would we ï¬nd tires to ï¬t if we ordered a wheelset and one was 25.9” and the other was 26.3”? Perhaps the problem is the term “standard”. The above is a semantic argument but it does perhaps point out that “industry standard” is not the most accurate term to describe the changing bicycle components landscape. Sure, we donÊ¼t have a standardized wheel size for mountain bikes any more but the sizes we have all match the design parameters of a preset measurement.

650b is yet another standard that feels to some like it is being pushed into a marketplace where consumers are resistant to having standards pushed on them. One person we spoke to, who wishes to remain anonymous, pointed out that EastonÊ¼s announcement of the new 35 bar and stem combo (35mm bar clamp diameter) was greeted coolly at ï¬rst, when the word standard was associated with it – but since Easton has stepped back from that one dirty word and emphasized the mechanical advantages of their “system”, customers have warmed to the idea. 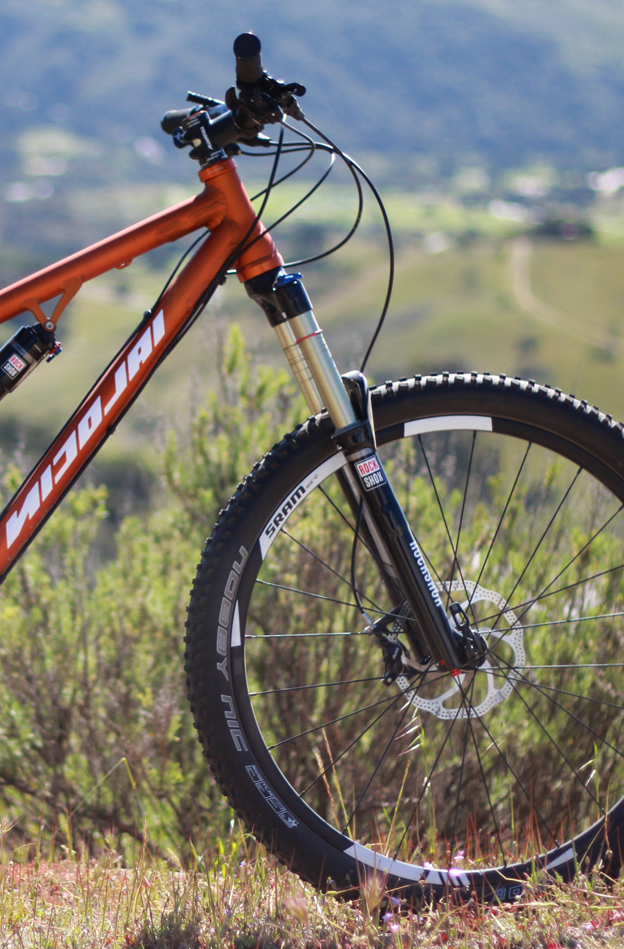 Nicolai’s 650b bike sports the newly-announced Sram Rise wheels, Revelation 650B fork, and Schwalbe Nobby Nic tires. 650b is upon us, and the big names are buying in. Photo ~ Seb Kemp

CarterÊ¼s statement seems to echo the sentiments of some of the riders we spoke to over the weekend. The average guy on the street who perhaps feels “the man” is trying to bleed him dry. However, innovation doesnÊ¼t have to always be driven by the proï¬t motive all the time. Man wasnÊ¼t put on the moon and the iPad3 wasnÊ¼t developed because of the need to make a dollar. Was it?

“ItÊ¼s funny to see people talk like itÊ¼s a conspiracy and that the industry wants people to buy more stuff. The goal of everyone I know that works at a company isnÊ¼t to sell stuff and trick people into buying it; they just want to improve our experience on bikes. I think thatÊ¼s whatÊ¼s happening. It is a little crazy that there are three sizes now – kind of confusing perhaps.” – Shawn Spomer, head of VitalMTBÊ¼s evil internet empire and former ringleader of Littermag, the counter cultural pamphlet that promoted rebellion, anarchy and resistance to the system. 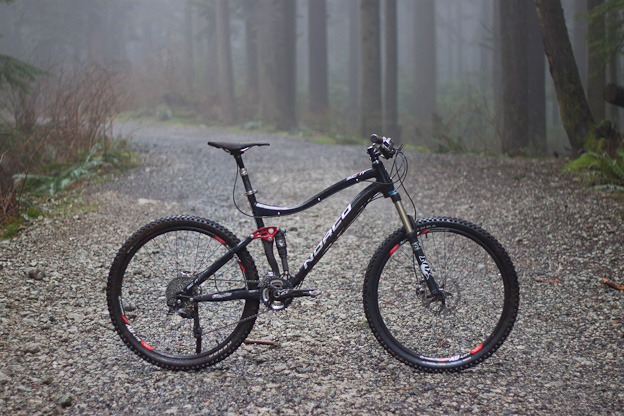 This is a regular 26″ Norco Sight with 650b wheels and 2.1″ Kenda Nevegals fitted for testing purposes. We’ve had the chance to ride this bike and an almost-identical stock 26″ version here on the Shore, with test reports to come. Photo ~ Morgan Taylor

One wonders perhaps what will happen when a new rider walks into a bike shop for the ï¬rst time and is bombarded with a confusing collection of digits and numerals – all of which, to a gaper, could be utter nonsense or utter meaningless gobbledegook.

“IÊ¼ve met riders who donÊ¼t know what 29er even means. It makes sense to us mountain bikers who are indoctrinated into the system of signs and language, but what about the novice rider? They donÊ¼t care or care to know, yet.” – Mark Jordan, former magazine editor turned marketeer for Fox Shox.

But this difï¬culty and challenge isnÊ¼t just for the customer on the street; there are issues for the local bike shop too.

“I wonder about the shops. What about the inventory they have to carry already and now theyÊ¼re having more product forced onto their ï¬‚oors. The industry needs to think about and support those guys.” – Paul Guebara, DT Swiss communications manager and good samaritan.

“On a professional standpoint IÊ¼d like to see the wheel size thing settle down a bit if just to make my life easier.” – Jeremiah Boobar, SRAM product chap and rider of mountain bikes.

“I think it will be interesting to see what happens. I think we need more sizes though [laughs].” – Andrew Shandro, X-Games ice biking champion, fatherly freerider, and owner of fast legs. 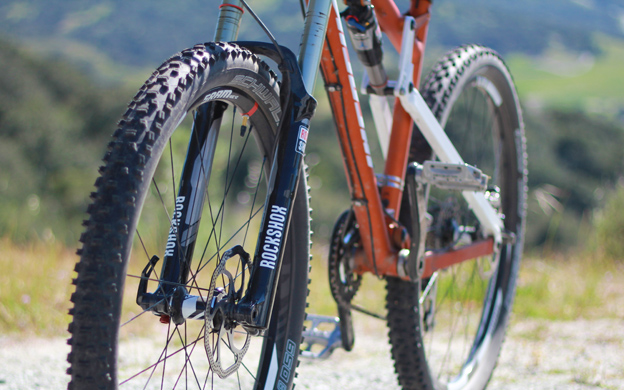 Another look at the front end of the Nicolai.

“ItÊ¼s the ï¬rst time that customers have ever come to us asking about product rather than us marketing it.” – Pete Stace-Smith, legendary nice guy, 70s mountain biker and NorcoÊ¼s media liaison.

Is it a case of GoldilocksÊ¼ porridge? 26” is suddenly regarded as too small, 29ers are just too big and clumsy, but 650b is just right: the middle ground, the compromise, the best of all worlds. There is a high chance that this is true, however, it didnÊ¼t work for 24” – the grotty little half way house between BMX and MTB freestyling – so there is perhaps chance that it wonÊ¼t for 650b.

“Why is everyone so eager to just drive nails into the cofï¬n of 26” wheels? What did it ever do wrong? It never hurt anyone or did anything wrong. 26 inch is good, 29 inches are good, so why? Why?” – Mike Ferrentino, Santa Cruz Bikes communications warrior.

Ferrentino gets at an important point: larger wheels donÊ¼t have to – and most likely will not – replace the 26” wheel, but rather they will supplement it. The constant reï¬nement of frame design is helping us learn that each wheel may have its place in the market.

“Personally I own a lot of 26” bikes and I love them – they are fun to ride. IÊ¼ve ridden 29” and they are awesome too. So IÊ¼m not really sure what the purpose of 650b is. Do we need another wheel size? Really? What is wrong with 26 and 29?” – Ian Hylands, professional photographer and child of the North Shore. 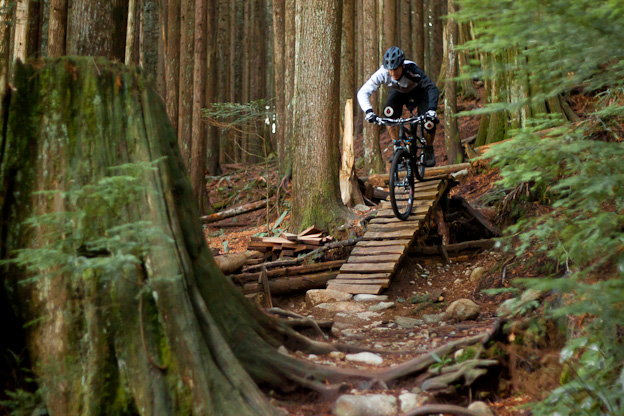 Pete Stace-Smith of Norco has been part of their 650b test group. Here he rides a different Sight test mule with mid-size hoops stuffed in on Mt. Fromme. Photo ~ Morgan Taylor

So who is in and who is driving it? That remains to be seen but it appears as if it is the Europeans and late comers who are most keen to jump on the mid-sized wagon wheel wagon.

European riders, magazines, and brands were very skeptical about 29ers when they ï¬rst came out. In fact, it has taken them up until about four months ago to ï¬nd out they actually really like them. However, no one likes to be proven wrong, especially by oneself. In order to save face, the Euros appear to be extra-eager to take 650b into their bosom. This way they can get their cake, eat it and still make it look like the 29er riders were wrong all along – even though everyone has been every nice and held off on saying “I told you so”.

But it isnÊ¼t just troublesome Europeans that are happy to swing a baguette over the top tube of a 650b bike now; itÊ¼s also all the companies that showed resistance to building 29er bikes and waited till it was too late. In the North American market, for the last two years now, if you werenÊ¼t building 29er bikes you were feeling the hurt. These companies donÊ¼t want to miss the gold rush but most of the good stakes have been claimed by companies who invested the time and money in developing good 29ers earlier.

Big companies like Trek and Specialized got it right with 29, both in timing and product, and donÊ¼t seem to be bothered about this new wacky wheel size – but we suspect they have got eyes and ears to the ground and a ï¬nger hovering over the big red button on the product presses if 650b does happen to take off. SRAM, Fox Shox, X-Fusion, DT Swiss and Sun Ringlé, amongst others, have developed 650b speciï¬c product, bowing to the demands of the bike brands with buying clout.

As we reported in Wheel Wars I last week some of the component companies we spoke with at Sea Otter were cool to the idea of 650b. Easton is saving resources at the moment and has no plans to develop a wheel with a whole new wheel size; Mavic says they could produce a 650b wheel soon if they wanted but we wonÊ¼t see anything before at least 2013; and Continental is playing the waiting game, more eager to get their existing product honed before ï¬ddling with a possible stillborn wheel size. 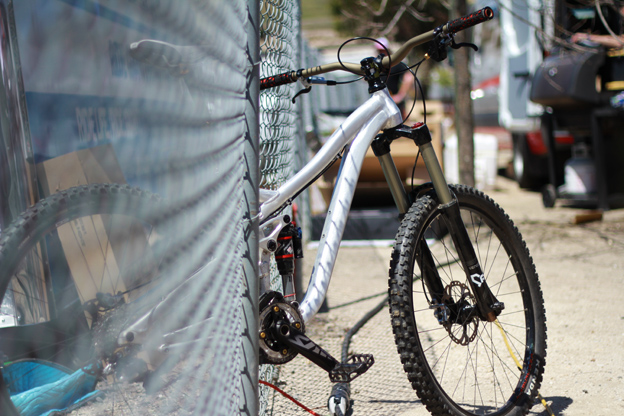 Norco’s not-so-well kept secret at Sea Otter, the 160mm 650b prototype. Unlike the Sights that we’ve been riding here on the Shore, this long travel specimen has been designed around the 650b wheels.

TO ABORT OR ABANDON SHIP, THAT IS THE QUESTION

This conversation wonÊ¼t end just yet and the battle has just begun. The rules of engagement are not yet clear and the battleï¬eld is still undecided. The victor will be decided in the LBS and on the trails, maybe not this year, maybe not next but one day. Perhaps.

Until then, letÊ¼s move on.

“I think IÊ¼d like to go one hour without talking about the different wheel sizes.” – Peter Vallance, Rocky Mountain BikesÊ¼ wheel-weary communications chap.

“Everyone makes too much of a big deal about it. ItÊ¼s all good. If it works for you, great. If it doesnÊ¼t then donÊ¼t use it. It is like abortion, if you arenÊ¼t for abortion donÊ¼t get one.” – Joe Parkin, Bike MagazineÊ¼s editor and former roadie (in both meanings of the word).

What’s your take on the Wheel Wars? Do the answers above echo your sentiments? Are you a staunch evangelist of a particular wheel size? Battle below…