Thanks to the creation of easy to use electronics, the everyday individual has now become an internet superstar. From the wide variety of helmet cam attachments to the iMovie wizards that can drum up edits bi-weekly, everyone’s got an edit, and the question is, “Have you seen it?”.

Growing up in Calgary, most of my mountain biking was done on the internet. Vicariously through those in warmer climates, I learned who was who, what was cool, and was beaten with more product knowledge than any shop seminar could ever deliver. Like most of you, I’ve also seen a ton of riding edits, and again like you, I know that some were better than others.

A good final product is made up of more than lengthy time lapses and finger licking breakfast shots. Creativity and intelligence is what keeps my eyes glued to the screen. You have to have an angle and play off of it, because otherwise you’ve got fried eggs and sizzling bacon. I did a quick survey of internet video watchers, and made up “10 Things to Omit in Your Mountain Bike Edit”.

Thou shalt not film the same jump from the same angle six times.

10. Epic Commentary. There’s no question that our sport promotes strong feelings of passion, but why is everyone so serious? Rob Warner has some of the most over-excited commentary I’ve ever heard, and I’m sure I’ve never heard him close to tears describing dirt.

9. Fake Production Companies. Just because you own a Macbook, and have a knack for cut and paste transitions, doesn’t mean you own Full Tilt Films, or some other overly intense named business.

8. Skids. Nobody is impressed with you grabbing a fistful of brake. If you want to movie quality corner explosions, you have to bury cherry bombs. 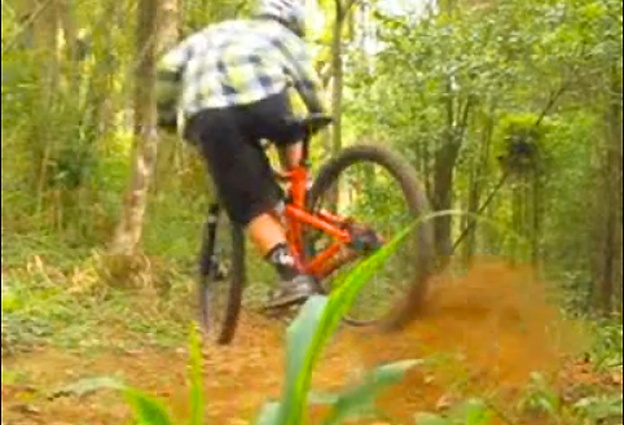 7. Time lapses. Everyone has seen fog roll, the sun set, and leaves change color. This is about you impressing the people of the internet, so unless you have David Attenborough to line up your opening speech, move on to the action.

6. Lengthy Product Shots. We get it, you’re sponsored. If anyone actually cares what sock sponsor you have, they will email you or use social networking in a roundabout non-efficient way.

5. Music. This is obviously a preference, but it needs to be tied in to co-exist with the theme of your video. Remember Bourdon and Schwartz in NWD 2 with Blood for Blood?! Remember, there is life beyond M83.

3. Too much Slow Motion. Nothing like taking the thrill and excitement out of adrenaline sports by giving the viewer enough time to tamp a new espresso between lip and landing. If you’re a rider, you know what to look for, and don’t need ten seconds to see it.

2. Filler Riding. You should be showcasing the material that is going to make you stand out! If you just GoPro’d the GLC drop, don’t include it. Gareth Dyer already heel-click’d it.

1. Video Length. If your video is so insane you’re melting minds, it still needs to be concise. If you can’t wrap up an elaborate Intro, Content, and Outro in 4:30, you’ve got to much filler (see point 2).

Do you love the Athertons and two minutes of slow mo bike loading? Are their exceptions to this list? What is number 11?