The Canon 7D, and other DSLRs of the same ilk, are the next step up from the Go-Pro or Contour HD. Accessible, readily available, and you become a photo/movie producing god of the same caliber as Spike Jones or David Lynch. Except it doesn’t, because although it is a fabulous tool, it is not the artificer.

Supposedly digital cameras are more affordable these days and they have a host of new high tech features that can help make a photographer realize their vision for a shot, which bizarrely, includes the ability to shoot high quality video. These DSLRs have become very popular with film makers for a variety of reasons, and now the camera manufacturers are increasing the number and quality of film making modes on any and all still cameras.

This means anyone can go out and buy a camera and a computer with some Playskool editing software and then upload it to the web. However just because we have the tools doesn’t mean we have the capacity to make a work of art. It falls on the filmmaker to come up with a concept, a story, a plot, collect the shots that convey this story and its themes and then edit it together into a cohesive whole that tells the viewer something. However, in mountain biking terms, what we are getting is a lot of video that follows the exact same formula and storyline.

We have all seen a bathtub load of videos that all look the same. You know the kind: rider drives up to the parking lot in truck laden with bikes. Rider unloads bike and then there is a close up shot of helmet straps getting done up or feet twisting into pedals. Then we the viewer are treated to four minutes of mid pack riding, slow-mos, freerider cutties, and skids all paired to some vaguely popular electro mod music. Usually these videos allude to the actual act of mountain biking as much as having sex with my own hand does to the real three minute thing. Usually the rider is alone, shredding the trail like they built it (which they probably didn’t). But how often do you go out and ride alone?

Maybe more than I realize.

The only other slight deviation from this model is the one where a rider talks. Usually it is the same old blithering lassitudes echoed about ‘this season I want to achieve this, that and the other,’ or even worse; the bike check. Please, your bike is an incredible machine, but guess what, we all have one just about exactly the same. They all have brakes, they all have suspension, and they all have tires. There is nothing vaguely special about your bike and I don’t care to see you fumble your way through this inane attempt at repping your sponsors that has got the marketing consistency of water. If you want to represent your sponsors think of a way to not make you or the products with which you whore yourself this season look like some insipid, lackluster tripe that has the personality of a dial tone.

Usually a web edit looks like it was shot in one afternoon and edited whilst the film maker was updating his Facebook status. It is incredible that content can be produced so quickly, but what about a rider putting some hard graft into the edit. Rather than filming a trail top to bottom in one session, how about collecting footage over a long time and collating it into the very best shots. It’s just one afternoons worth of filler, with zero thriller. 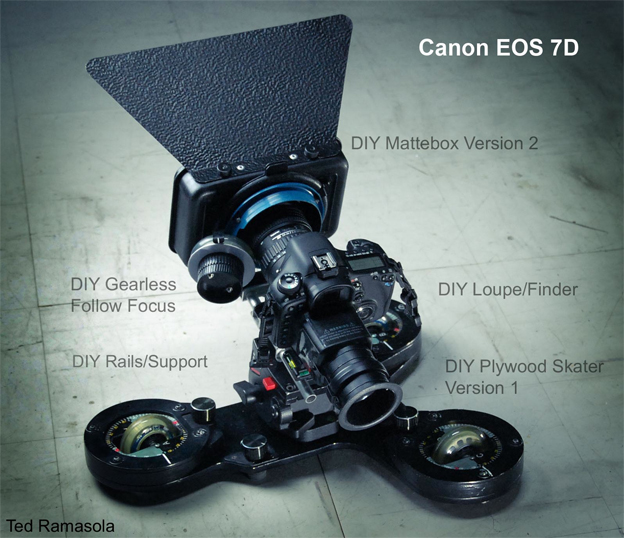 Beneath all that is a Canon 7d – but even without it you can produce quality moving images. Photo ~ Ted Ramasola

What is currently happening is these digital super tools are allowing crappy content to rule the roost. We are so occupied in just getting web edit out there that often not a lot of time is spent thinking about why and how we are doing things. It sounds awfully like when VHS replaced traditional film in movie theaters. At first it was incredible that almost everybody could produce home videos, but then when amateur movie producers realized that they could buy equipment to make home videos of Darren and Tracy having sex on their own couch, the craftsmanship of making proper blue movies was lost. There was no longer any need for sets, stories, and professional performers, instead the back seat of a Chevy Ecovan with some old trollop from the pub would do. It cost a lot less to produce and it allowed a certain democratization of movie making, but we lost the art and craft of making proper movies. Now it was the start of the rise of amateur. A time where any old bollock could unleash his artist within upon the general public. Quality died in the wake of dilettante. And this is what I hope doesn’t have to happen for us mountain cyclists.

A good movie should take time to gestate. The motion picture should be painted in pencil first, plotted, planned and then created over time. We should wait for greatness rather than be preoccupied and absorbed by the quick fix gloop that we are swamping ourselves in. This is why the professionals of mountain bike film making are respected. The Freeride Entertainments, The Anthills, Stance Films, SecondBases and the Clay Porters all take time and care with their craft. They don’t chew some half baked plastic fast food then stick their fingers down their throats till they vomit bile and mucus for us to collectively consume like a horde of twittering little garden bird chicks.

But like I said back at the start of this long-winded multi-part odorous odyssey, this isn’t your fault. No no no, it’s society’s fault, and society has got nothing to do with you.

Was that warm and fuzzy enough for you?