Hyperspeed And The Unbearable Torture Of Headcams.
The headcam is an amazing invention. For the cost of a fancy meal downtown you can buy a tiny, hardwearing, waterproof video camera that shoots hours of footage that is nearly as good as was used to film the first Star Wars. It is incredible. It’s a genius little bit of kit, but somehow these things get mistreated.

It’s pretty much impossible not to look cool with a large, box-shaped item strapped to your helmet.

Youtube is essentially made up of one part crash video, one part illegally uploaded movie, and months and months worth of top to bottom A-Line head cam footage. Have you ever actually been able to watch an entire POV top to bottom run of any trail? If so then you must be the kind of guy that is amused just by listening to the dog farting in the corner of the living room. There are whole servers devoted to storing this sort of tedious garbage. Whole data banks of binary bullpoop buried underground and fed non-stop by the gulping power requirements of millions of plebs uploading their headcam holiday footage. Just think of the power these servers require. Forget cutting back on petrol usage, stop uploading guff to the internet and we will have more chance of solving the looming energy crisis.

Once you have seen one trail shot from a headcam then you have seen them all. The video starts with the rider and his friends gawping into your screen trying to see if it’s on and then what follows is a lot of shaky, jittery footage accompanied by a lot of thudding noise. 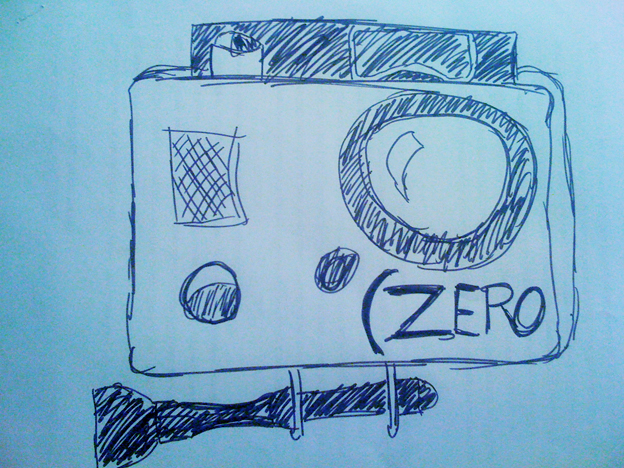 Illustration by Seb Kemp. The man has many talents.

Are you recording it for posterity? I hope not because the internet is a fad and it won’t be around in years to come. So, much like your father has his teenage years recorded on some antiquated format that he no longer has the device to play it upon, you will be left with…nothing, not even a solid copy. Just an expired URL address which isn’t worth the paper it isn’t printed on.

More so, no one else wants to watch it. Please stop. The honeymoon of useless content is over. Don’t amaze yourself at what you can do with a headcam can do, instead amaze everyone else with what you can do with it. Get creative and use this tool like it should be used. Use it to highlight the empathetic sensation of movement and dynamism to the viewer. Use it sparingly, think about the shot and what you want to convey to the viewer.

But just one pleading request: if you do want to upload an entire unedited top to bottom run, including rest breaks, banal banter between friends and candid crappiness, then please tag the video as ‘Do Not Watch, Ever’.

Here is an exception

Mason Mashon – This is probably the coolest GoPro edit I’ve seen. Nothing crazy here,
just great perspectives from inside the barrel and nice upbeat music.