Axel Kreuter is with Vertriders, a crew out of Austria who seek out amazing high alpine rides and uphold some pretty high standards about how they do it. This video – conquering a mythical beast known as the Garggleress – gives us a taste of what they’re into. The commentary in the video is in German but the riding is universal. Allow Axel’s introduction to set the scene for you…

The terrain does not allow for fire roads – it’s a 2 hour hike from the end of the fire road. Photo ~ Hannes Mair

It wasn’t love at first sight. Unimposingly, she resides at the remote end of the Gschnitz-valley. It is the majestic mighty Habicht (“The Hawk”) and the mystical threesome Tribulaun mountains around her that will catch your eyes. The intricate beauty of the Garggleress lies within. She looks like a rugged tooth emerging only about 200 meters from the steep slopes of a grass covered foundation. After the hike across the base, her presence is still not too spectacular. Look at her from the saddle, she appears cold, closed, unfathomable. Then take the first few steps towards her, she becomes a little more inviting, when she reveals the first closer glimpse of her vertical rocks. 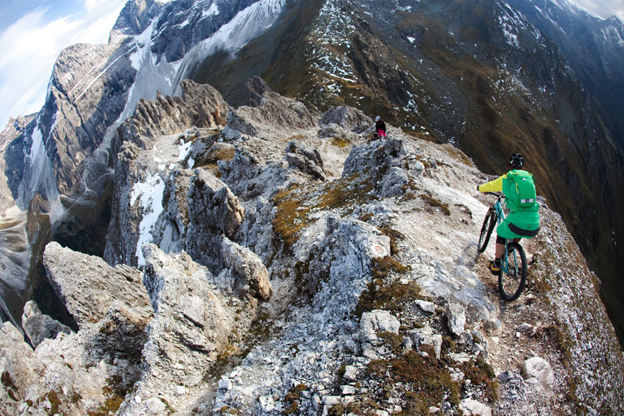 The point of no-return at the key section. It should not get more exposed than this. Photo ~ Hannes Mair

As you approach her shiny golden rock face, she opens up unexpectedly, unconditionally. With her guards down, you climb inside her, through rock pillars over rough gravel. You feel intimately embraced as you step out again, onto her exposed flank, and climb over rough steep rock slabs onto her spine. Again, she awaits with a surprise. Her summit is a long ridge, bearing at the end, a big cross marking the highest point. The ridge is narrow and falls off steeply on both sides, yet her grassy soft ground is wide enough, you could lie down on your back, look up in the sky and pretend you’re lying on a park lawn. 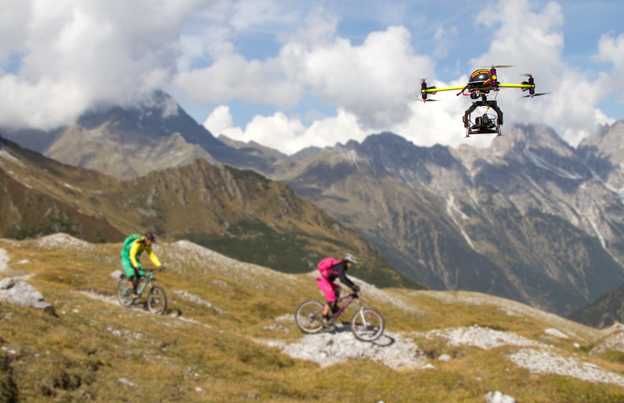 Filming with a so-called quadru-copter was unique. Riding had to be spot on. At the altitude, lifetime per battery pack was 4 minutes (one take), we had 8 packs on the summit. Photo ~ Hannes Mair

The way back down would just be the reverse, if it wouldn’t be for the mountain bikes that we carried up. The hiking track becomes an even more beautiful line trying to ride it. It is a logical, yet illusionary line. Technical, exposed, with some gnarl for sure, unforgiving in places, yet always honest and predictable. And she let us ride. A reward maybe, of respect and courage, a return of affection even? 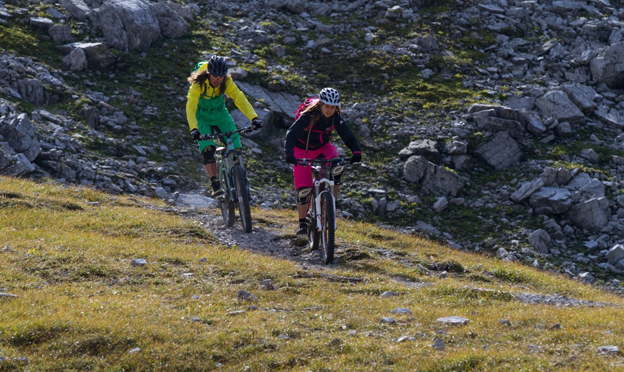 When the gnarl is over, the flow is even better. Photo ~ Hannes Mair

We made a good first effort of film and photo documentation to put the Garggleress and her beautiful lines into the perspective she deserves. We have been looking forward to the final film cut that should produce a few minutes of Vertrider mountain bike action including some amazing aerial views. After all, the movie is about biking, not a mountain love story. Well, for me personally, it surely is both.

You can turn on CC on Youtube, but the translation may not capture the exact feel – do so at your own risk…

I don’t care that I only understood a few words of what they said… this vid was awesome. Short travel bikes, super exposed lines in the Alps, and helicopter aerial shots create a very nice package. Would you hit it?