Where would mtb flicks be today if The Collective hadn’t come along? We’d still have the considerable legacy of New World Disorder, Kranked and North Shore Extreme, to name a few, but would we have hit the next level? Films like Life Cycles, From The Inside Out and of course Follow Me owe much to The Collective, Roam and Seasons. This trilogy proved you could sell a movie without Bender-sized drops and a consistently ridiculous gnarl factor. 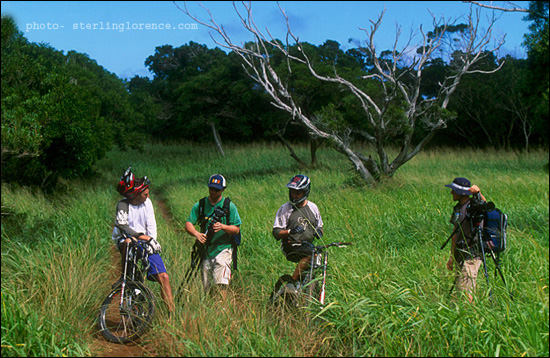 If the focus of your film is blowing the lid off size, exposure and general ballsiness there comes a point where you either kill someone, hit the ceiling or you just get tired of trying to outdo yourself, and the NWD crew seem to have come to this conclusion as well.

Early video premieres were inspired rowdy affairs punctuated by a cacophony of cheers at all the right moments – but those days are long gone. If you can’t make your audience gasp or cheer by shocking them, you need to get emotional. Looking back it almost seems like Jamie, Darcy and the crew knew what was coming, but actually they were just making the movies they wanted to make.

Watching From The Inside Out, The Coastal Crew’s first feature, the influence of The Collective films is easily seen, right down to their choice of partner. The film was shot in conjunction with Anthill Films, the production company Darcy and the crew formed after Jamie Houssian’s departure. The lush cinematography combined with soulful action and story telling are straight out of The Collective’s playbook.

Dylan Dunkerton makes no bones about it; “the Collective films for me provided the first real connection to the riders and what mountain biking was truly like. They broke the mould of the big hit rock star style film and brought more meaning and emotion to the eyes of the audience. I watched The Collective films growing up and they have certainly made a large impact on how I ride and shoot today.”

Curtis Robinson was paying attention as well. “For me The Collective was my first real introduction to bringing the mountain bike ‘lifestyle’ to the viewer. Showing details that you might not see in other films. The best part about riding for me are those mixed feelings that you have on every ride. The unknown aspect, the smiles, the nervous moments, and the focused need to negotiate your way down. These are some of the things the Collective have displayed in previous films that have inspired me to look at things a little differently.”

The Collective lives on in a nice tidy box set but the role he played in forever elevating mountain bike films is Jamie Houssian’s most impressive legacy.

Here’s the final installment of our conversation with Jamie.

Miss the first two installmnts? Click ’em up. Part I and Part II

Pick up the Box Set of The Collective here.