I am a card-carrying glove wearer; I’ve crashed my bikes enough times on the street and on the trails to know that I’m not only wearing gloves for comfort but for protection. For a few months a year we fight cold extremities and hope to find a magic bullet that will keep us warm and not affect our riding experience. Insulated winter gloves have a tendency to slide around on your bars, can make braking treacherous, and reduce tactile feel to that of an oven mitt. Fortunately, the Giro Pivot has none of these qualities.

Insulated gloves can be hit or miss, often too thick and not very confidence-inspiring. The Giro Pivot is the thinnest warm glove – or the warmest thin glove – I’ve ever worn. Photo ~ Jason Fuller

Since the fleece liners in the Pivot are stitched in to the gloves, they don’t let your hands move around on the bars nearly as much as other windproof gloves I’ve tried. This is confidence-inspiring, and gave these gloves some staying power since they don’t lower the chances of reaching the brakes.

The gloves also don’t present problems with on-and-off usage. I stop to shoot photos at least a couple times each ride, and while the Pivot is thin enough to operate my DSLR, I take them off to shoot most of the time. Lined gloves can often be a pain to take on and off because the inner liner doesn’t stay where it should, but the Pivot’s stitched inner liner stays put inside the fingers of the outer glove.

Giro markets these gloves as waterproof, a quality which I can report does not hold true. While the fleece lining and water-resistant outer do a good job of keeping your hands dry longer than summer gloves, the water will eventually win out. On the plus side, your hands will be warm, as the gloves are quite windproof and well-insulated. 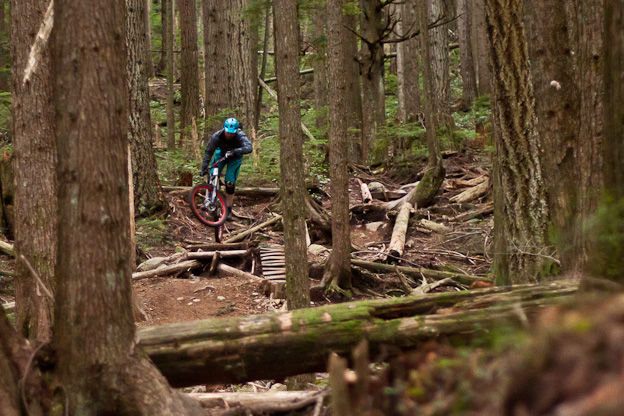 An indicator of a good glove is that it doesn’t negatively affect your riding experience – and in the case of winter gloves, you hope they will actually improve it. As far as lined gloves go, the Pivot performs very well. Photo ~ Matt Dennison

The hook-and-loop closure on the cuff does not hold very well, but the gloves ride just fine with it undone. When you need them to be water-resistant, the cuff of your jacket will hold the gloves closed.

The Pivots will dry out overnight when you get them soaked, and are definitely good to go in the morning if you put them near a heat source. I was in the habit of leaving them on the radiator in our old house and that was working great – until one day when I went out for a terribly wet ride and forgot to dry my gloves… twice.

Left in a soaking heap with some other riding gear, the Pivots have acquired the oh-so-familiar funk of my old snowboard gloves. This was completely avoidable had I not left my soaked riding gear in a pile two rides in a row. Even when worn dry, the gloves now leave my hands with that cafeteria-at-the-ski-hill odour. 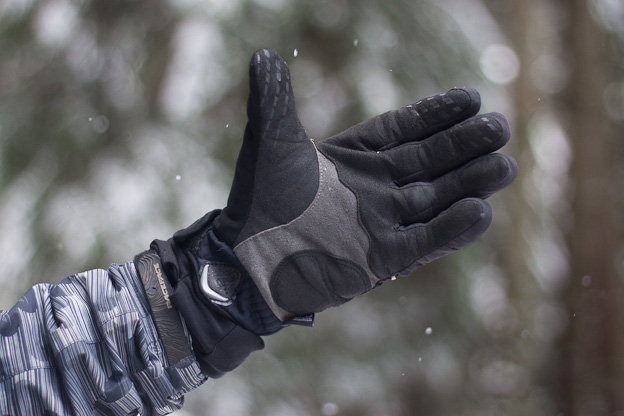 This is after at least two months of daily use on the trails and around town. The palms of the Pivots hardly show any wear. I haven’t crashed them too badly yet, but the stitching does seem durable. Photo ~ Jason Fuller

The Pivot actually ended up seeing use on a daily basis for commuting around town on bikes and my gas scooter. 60 km/h with no fairings can really put a chill in your hands, and the Pivot does a great job of keeping that wind out.

Bottom Line: These are the thinnest warm gloves – or the warmest thin gloves – I’ve ever worn. Until I forgot to dry them after a particularly wet ride, I had almost no reason to complain about them. Always warm, dry for quite a while, and thin enough to not bother me on the trails.

The Giro Feature is a hard shell AM helmet with good protection for the neck and an adjustable visor. Its pricepoint is below that of Giro’s existing AM helmets, the Hex, Xen, and Xar. I have been using a Hex as my primary helmet for the past year and a half until the Feature came along. 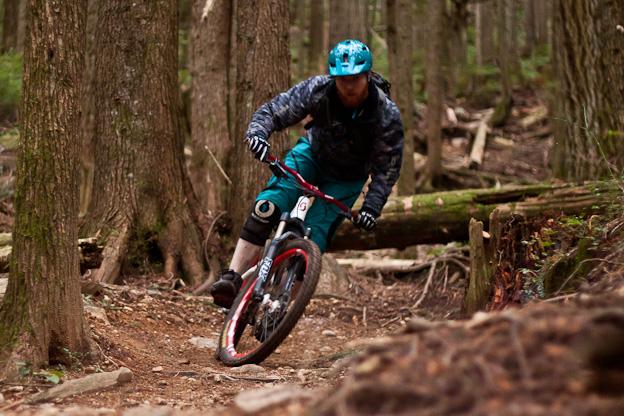 The Feature’s teal colour coincidentally matches my RaceFace shorts pretty much perfect. The helmet is available in a wide array of colours, including black and grey for those who aren’t into the colourful options. Photo ~ Matt Dennison

The Feature uses a different strap system than other Giro helmets. The two straps are sewn together under the ear and a single band goes under the chin. This is quite simple, and the adjustability of the traditional two-strap system isn’t missed – but the strap itself is quite thin and doesn’t hold its place very well at the buckle. I often find myself tightening the strap mid-ride.

The padding inside the Feature is thin and doesn’t hold much sweat. I consider this a bonus over the traditional padding in my Hex, which retains a lot of moisture. The lack of padding doesn’t affect comfort, and I have gladly chosen the Feature for most of my rides in the past few months. 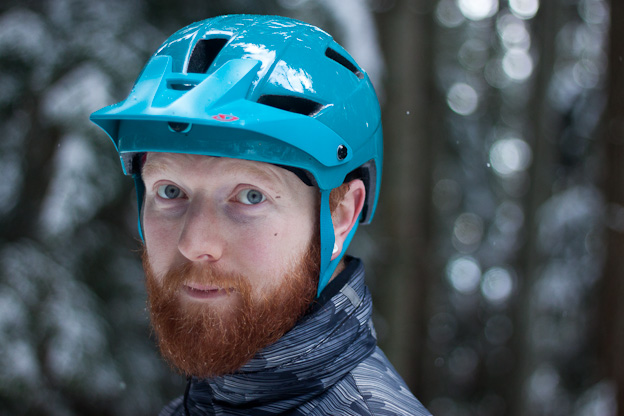 The Feature weighs in at just over 300 grams and has twelve vents to keep your head cooler than in a skid lid. Photo ~ Jason Fuller

The fit of the Feature is slightly more egg-shaped than other Giro helmets. I can generally trust a Giro to fit me perfectly, but the Feature is slightly longer than my Hex resulting in a slight gap at the front of my forehead. The helmet also has a tendency to rotate forward on my head slightly, but not to the point of discomfort or restricted vision. Helmet fit is indeed personal, though, so your best bet is to try one on. 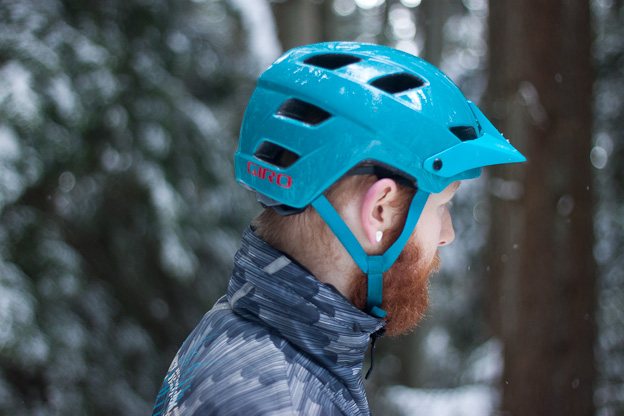 Giro’s In-Form fit system allows for single-handed adjustment of the dial on the back, as well as a height adjustment for the interior strap. The sewn integrated chin strap doesn’t like to stay tight, but it is comfortable. Photo ~ Jason Fuller

The Feature’s moto style visor is adjustable just like Giro’s full face, the Remedy. A thumb adjustable screw allows the visor to move up and down. I tend to run the visor all the way up as it’s in my field of vision if it’s any lower. 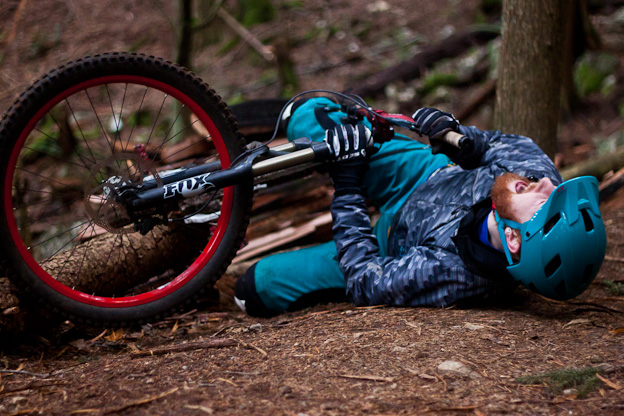 Testing out the Feature: a good indicator of a helmet’s fit is whether it moves around when you crash and might actually need it. As you can see, the Feature stays put. Photo ~ Matt Dennison

Bottom Line: Another entry in an increasingly-popular helmet genre that has not yet fully developed. In helmets, more choice is always better, as fit and comfort is paramount. For those considering a helmet in this genre, the Feature is worth a look.

MSRP for the Giro Feature helmet is $75 USD

The Honeymoon is where a product has been used at least ten times over a short period of time. By this stage it gives the reviewer a chance to formulate a fair idea of the product’s performance, but not enough to consider its long term reliability. This review may act as the final stage in some cases; if so, it is clearly stated in the review that the product’s long-term performance was not fully tested.

What compromises do you make for winter riding gear? Do you endure the stench of old hockey bags? Any comments regarding the too-close-for-comfort colour match in Morgan’s outfit? Your words below…