This past weekend was the first bike festival held at Silver Star Bike Park and it couldn’t have been a better weekend!  All the elements aligned to make it a great weekend full of great biking conditions, beautiful weather and nonstop action of man’s most noble invention – the bicycle.

Saturday was the main thrust of the weekend and the weather God’s shone brightly on the lush green slopes of Silver Star. The Camp of Champions Air Bag got the event train rolling at 10am under blue skies and temperatures in the 20 degree range…perfect for being on a bike. The 30’ X 30’ stunt man style air bag cushions the landings for riders trying out new tricks. Spectators were treated to some great tunes from the Oakley trailer and a steady barrage of backflips, front flips, double tail whips, double backflips, 360’s, 720’s, and on and on.

Riders that were more into charging the steeps at top speeds headed up to the top of Dag’s DH for a crack at a timed downhill run. The format allowed the 40 registered racers to all get two timed runs and have their fastest one be the one to either put them on or off the podium and their chance at the cash. 1st place in Men’s 16 & under went to Cole Swanson with a time of 3:28:17, 1st in Men’s 17 & over went to Regan Hogelie, who also won this year’s Air DH at Crankworx, with a 3:18:20, and 1st in Women’s 17 & over went to Ann Rajkovic 4:13:58. 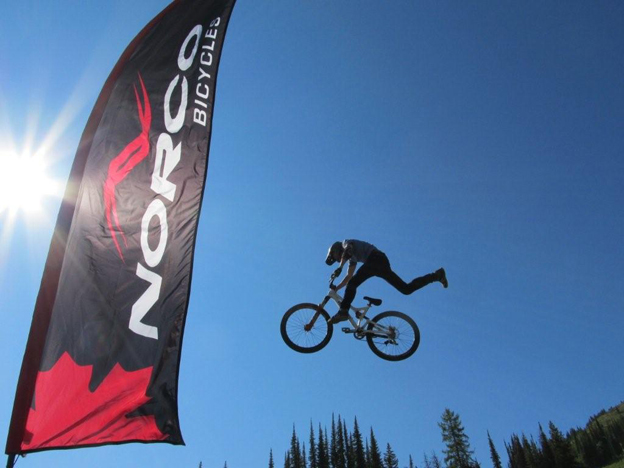 Twice on Saturday, and once on Sunday Ryan Leech’s unimaginable balance and bike control skills amazed onlookers of all age’s right in the middle of the village.  The skill and precision he displays on a bike is incredible.  Ryan was setup right next to the Norco tents who were showing off their 2012 bike fleet which looks amazing!

The main event of the weekend was Silver Star’s first ever jump jam on the new jump line created just outside the mountain village.  Trail crew and a few volunteers collaborated to create a super fun trickable line of four moves.  All morning on Saturday the dirt jumpers were chomping at the bit to hit these new features and in the afternoon they got their fill of smooth dirt jumps with a massive crowd of onlookers cheering them on.  Thanks to our friends at Oakely the jam was run with banging tunes coming from the Oakley trailer where some of the riders could congregate to judge the event.  The jumpers were split into two categories for the jam of roughly equal size.  The split was 16 and under and 17 and over and both groups threw down huge tricks!  Matt Denis impressed the judges with a big old 720 and Sam Dueck was laying down smooth stylie lines with a tail whip of the small boner log, backflip tail whip to 360 tail whip and a final tail whip off the last scrub jump.  The jam was rider judged by the competitors and from qualifiers to finals to the top three in each category the riders whittled down the field until they could crown the top riders.  In the end, it went down like this: Men 16 & under 1st place Matt Dennis, who also walked away with best trick by landing a huge 720, 2nd place Corbin Selfe, and 3rd place Brandon Andres.  Men’s 17 & over 1st place Sam Dueck, 2nd place Brett Rheeder, 3rd place Casey Groves. Honorable mention from the riders went to 13 year old Max Langille who landed his first backflip on dirt and was throwing it down all event. 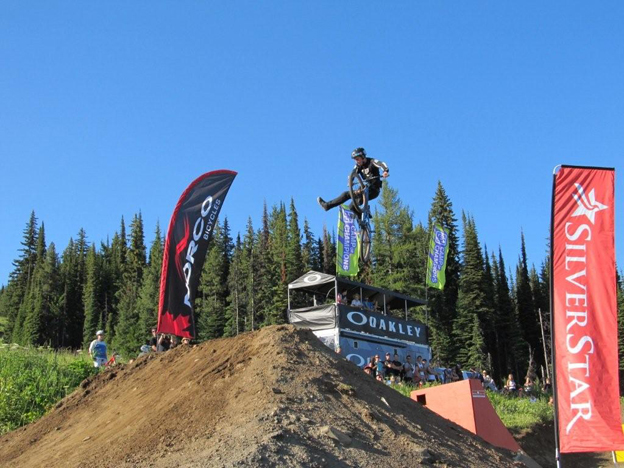 Sunday saw more great action at the Camp of Champions air bag, more great moves from Ryan Leech, and more riding in the incredible Silver Star Bike Park. With the success of this year’s event it’s pretty safe to say the first ever ‘Two Wheel Festival’ at Silver Star will be celebrating its second annual next summer.  We’d like to thank everyone who came out this weekend and made it such a fun event.  Special thanks to Norco for helping promote the weekend and all the great prizes, Camp of Champions for bringing the airbag and energizing the village all weekend, Ryan Leech for doing his mind blowing shows for everyone, MTBCo for hosting the Follow the Frog game on the trails and also NOCS for doing the Wheel of Fortune on Sunday.

Were you there to witness it all go down? Share it all here…