There is a piece of contemporary MTB history in the making located at the corner of Trout Gulch Rd. and Cathedral Dr. in Aptos, California. If you show up with a shovel you are more than welcome to be a part of it.

The Post Office dirt jumps are built on a private lot at the corner of Trout Gulch Rd and Cathedral Dr in Aptos, California about fifteen minutes south of Santa Cruz down Highway 1. The lot the jumps are built on has a slight slope to it and there is only one tree. The lot is leased to the town and the jumps are public and legal. The jumps are called Post Office because the Post Office is directly across the street from the lot and at the time that name made sense to the kids that began riding and building there. Those kids have grown up and are now known as the Aptos Crew led by Cam McCaul and Greg Watts.

Regarded as some of the best jumps to be found in North America, people travel from all over the world to ride Post Office. A statement of fact that only sounds far fetched to those who do not dirt jump. The take offs are steep and appear to be vertical making the first drop in at Post Office an intimidating experience for any rider. Riders love these jumps because once the lines are learned they flow and ride perfectly. 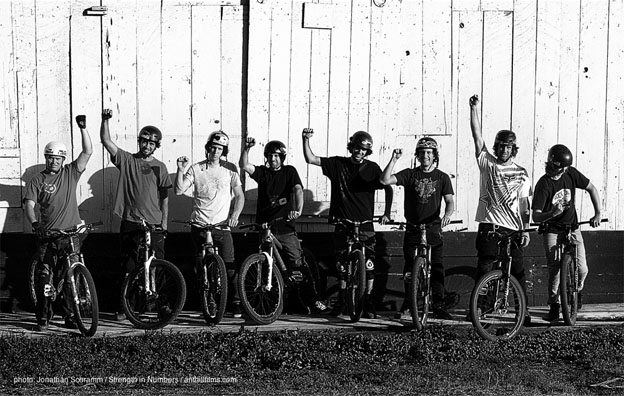 The jumps in their current state are the result of ten years hard effort. The first place Watts will take you when you arrive to ride at Post Office is to the hardware store to buy a shovel. It is friendly reminder that you get back what you put in at Post Office. This is a common sentiment in many dirt jump communities and a commanding belief held by all the local riders in the Aptos Crew.

The perfect balance of speed and amplitude is the magic of what is goes on at Post Office. The lines are built so that the skill of the rider is the only variable in this equation. A perfect take off provides the perfect opportunity for the perfect trick. And a perfect landing leads to the next opportunity. These jumps are sculptures with more purpose than just to be looked at. They do what they were designed and built to do. If you ride the line clean, the jumps will reward you with the opportunity to fly.

The Post Office jumps in Aptos are a beautiful thing. A vacant lot that brought strangers together to become best friends. Jumping bikes for fun that nurtured a hard work ethic and built livelihoods. A crew of mountain bikers brought together based on a common focus of riding bikes they way they like to.

The Aptos Crew began with a piece of land and a few piles of dirt. But what exists today does so regardless of land. Post Office has always existed on borrowed time. It has always been known by all in the crew that one day the lease may not be renewed. Though their land is not permanent the strength of their crew is, and that is a story we can all learn from.