Authorities have closed a number of trails near Alice Lake until further notice because of an aggressive cougar in the area.

Conservation officers have been trying to track down the cougar, Insp. Chris Doyle of the B.C. Conservation Officer Service said on Monday.

“We had officers out yesterday on the trails looking for it and then we brought in some tracking dogs, but the cougar’s on the move and seems to be staying one step ahead of us so far,” he said.

Earlier on Monday, officials were urging Squamish trail users to exercise caution after a series of encounters with a cougar that was described as “difficult to deter and displayed aggressive behaviour” on the weekend.

Three such encounters occurred on Sunday (Aug. 7) in the area between Garibaldi Highlands and Alice Lake. The first two occurred on the Mark My Word trail and the third took place near the summit of the trail called Credit Line, Meg Toom, Squamish Bear Aware Co-ordinator, wrote in a group email.

In a posting on The Chief website, mountain biker Reed Holden wrote, “My wife and I ran into a cougar on Credit Line trail near Alice Lake today. It was following her on her mountain bike about three feet away before I was able to scare it away — then it came back 30 seconds later and was not too interested in leaving. We left while keeping eye contact and it didn’t follow for too long.”

Stated the email from Toom, “The Conservation Officer Service is requesting that caution is used on all trails and to call the 24/7 hotline for any sightings or encounters: 1-877-952-7277 or #7277 on your cell.” 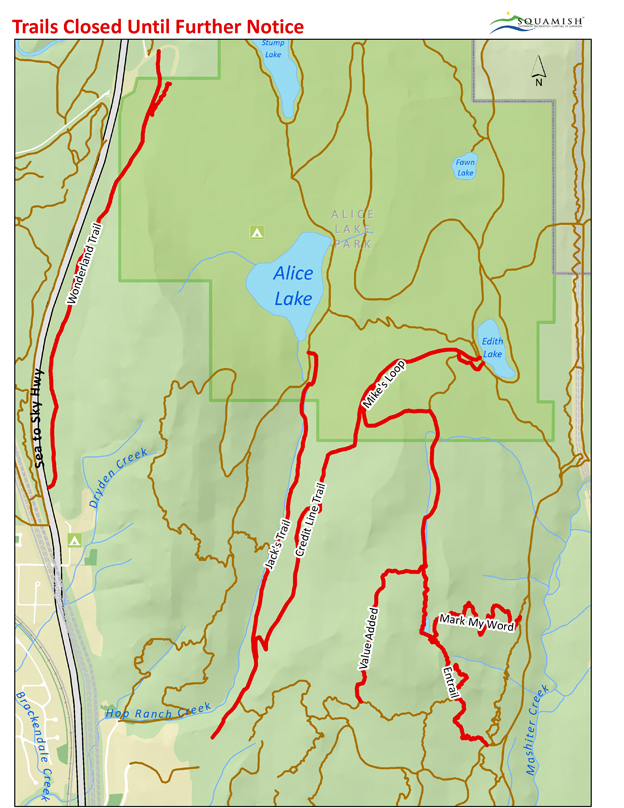 The following trails are CLOSED until FURTHER notice

These trails are being closed due to an aggressive cougar in the area.

For information on cougar safety please follow this link:

Any sightings? Any of your favs closed? Talk cougars (preferably the animal) here…