It was here in a flash and gone just as quick. It’s hard to believe how fast that 10 days of Crankworx goes by. Product launches, photo and film events, races galore, and of course trying to fit in some riding. Highlights for me were getting to catch up with Mr. Seb Kemp, a nice spin in Lost Lake was just what the doctor ordered, and the mellow crush gravel ‘climbs’ were perfect for chatting on the way to the trails that would serve as stages 2 and 3 for the Canadian Open Enduro.

The Unofficial World Champ Whip Off was hands down the best thing I’ve ever witnessed in the bikepark. I also got to take an old racing buddy from Ontario out for a westside xc ride. Pete Appleton is the national brand manager for POC, and also the promoter of the hugely successful Ontario Cup DH series. It was great to get away from the madness in the village and catch up on the valley trails. Other notables; Deep Summer with the Coastler Crew and the Canadian Open Enduro, which saw riding on a whole slew of rad Whistler trails with fun people. 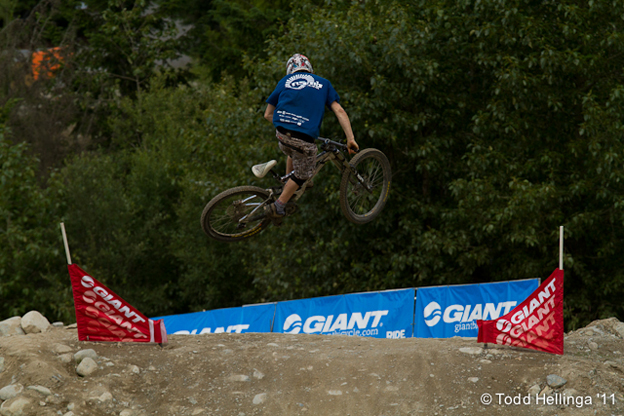 NSMB’s newest rider – currently on a trial basis – Ollie Jones raced in the corporate giant slalom race – and he threw sweet whips too.

State of the Park
Riding the little bike up in the park for the Enduro certainly highlighted the beat down nature of the Garbanzo zone. Now that CWX is history maybe we’ll start seeing some trail crew focus up there. let’s hope so, cause it’s in pretty rough shape, as Dan Gronross put it, “the bombholes have bombholes in them”! The lower mountain has continued to provide most of the fun though and even after the big event it isn’t running too badly. They’ve patched a few sections on A-Line, although it seems most trails are definitely showing the festival’s wear and tear. The thing I’m most excited about is having CWX over with still more than a month of summer left, although even with a sunny week forecast, it’s mostly been overcast and cloudy so far! Next week we get back to our regularly scheduled Phat Wednesday series, Keep on eye on the board at the base of the park next Tuesday, or the Facebook group to see what the course is. 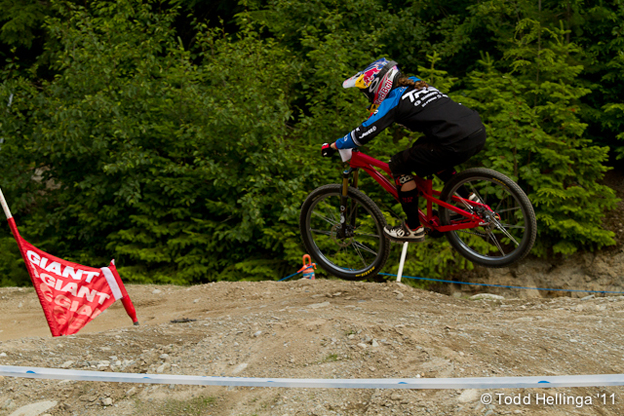 Jill Kintner took the win in the ladies division of the slalom, riding fast and confident.

While the wet(ter) weather hasn’t done much for people’s mood or tans, the upside is that Pemberton’s typical dry and dusty blown out trails have been tacky and amazing, from what I’ve seen in pics and vid. Unfortunately I haven’t been able to get up there in a while, but think I may have to make time this long weekend. Bike Co’s Seb Wilde took Troy Brosnan and his friends out for an 18th birthday rip on Gravitrout while they were out for Crankworx. Check out the vid below. The Tenquille Lake Cabin reconstruction is set to happen in the next few weeks as well and they are still looking for help/monies. Construction dates are scheduled for August 6/7 and 13/14. The Bike Co has a big info blog post here, check it out for all the pertinent info.

Further north, the Chilcotin is starting to get better, although seems the passes are still holding some snow. The full trail report from Tyax Air as of a week ago can be found here. Pictures I’ve seen have wildflowers out though, and TA is flying to both Spruce and Warner. I’m jonesin’ for some alpine singletrack and I think I’ll have to make my way up the Hurly sooner rather than later to get a fix!

A reminder also to everyone that BC Parks is receiving comment via their visitor survey as they move forward with their management planning for the newly minted Class A South Chilcotins Mountain Park and Big Creek Park in the Lorna Lake area. Both of these areas are extremely important to Mountain Bikers, and the economy of the tour operators up there. Take a moment to fill out a survey if you’ve visited the area in the past years and express your love of that area. It’s a special place for mountain bikers so lets step up and show them how much it means to us. 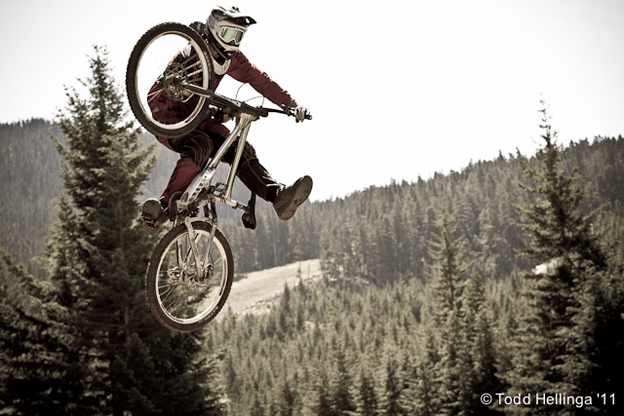 Lear Miller took some time during the Crabapple hits Whip Off World Champs to add some trickery to the mix.

It’s only a couple of weeks (August 6) until Grant Lamont’s Ride of the Valkyries tackles the steep slopes of Whistler’s westside trails. The course is about 30km and tackles some tough climbs and descents, with some fun flowier singletrack thrown in the mix. If the big loop sounds a bit too daunting, there will also be the Ken Quon Memorial Ride short course at about 12km and will cover the first third of the large course. Monies raised from the event with be donated to the Ken Quon Memorial Fund with a focus on supporting our local youth mountain bike programs. Cost is $40 for WORCA members, and you must be a member to participate, so hit up WORCA.com and join our fantastic club. Then come out and enjoy the rest of this summer’s great events! 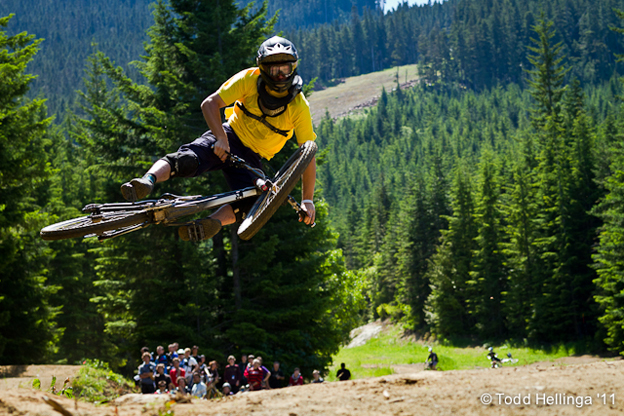 Ian Morrison repped Whistler honourably, and in my opinion had the nicest scrubs, although Eliot Jackson ended up taking the win in that category.

The westside has seen some interesting happenings of late. One of the deep summer teams from out of town caused much consternation when they hacked up a piece of lovely singeltrack built by one of our amazingly dedicated builders, for the sake of a one off stunt/move. This is as good a time as any to remind people to respect the trails and not go to someone else’s town and modify their trails. The word is that some unknown local showed them the spot and told them it was okay. Well, it wasn’t, and isn’t. What’s done is done however, and I know people are sorry. Hopefully we can learn a valuable lesson from this and ensure that it never happens again. In more positive news, the Muni is buffing/re-routing the Flank climb out of Stonebridge. The perpetually wet climb by the reservoir has been shifted out of the drainage and is now a sweet bench cut trail, and after you reach the Flank they’re building a new-school style climb up towards Cheap Thrills instead of the old mega-steep babyhead rock climb. Can’t wait to see how it turns out. It should make things much more pleasant on the way up there! 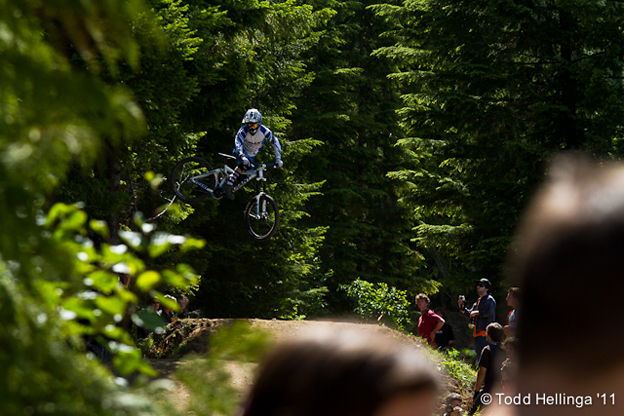 Danny Hart may not have won, but he’s still my favourite rider to watch. Big smooth whips that just oozed style, thanks for the show!

I’m still recovering from the week of festivities, but looking forward to a long weekend of biking and relaxing, and maybe finally catching up on all my neglected photo editing from CWX! Hope you have a great weekend too. Ride safe, have fun, talk to you next week! 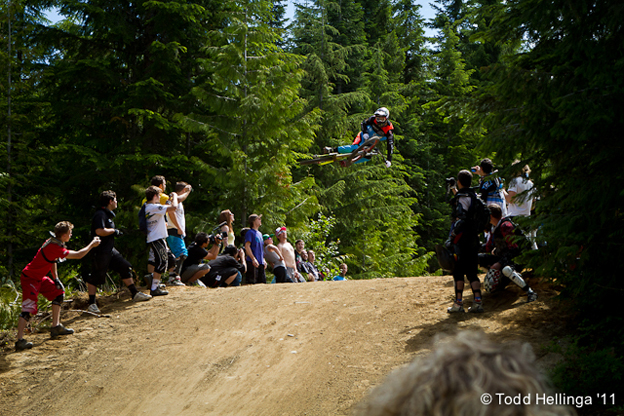 Brendan Fairclough getting flat. Not much else can be said!

Have you ridden the park lately? Pemberton? Southern Chilcotins? Give us your trail report – or whatever – here…