It’s Sunday afternoon and I’ve had to retire to the lake today; not so much a hangover as a general feeling of malaise has settled in. I’ve been held in the chokehold of Crankworx for over a week now and I’m feeling a little raw. But more so I feel like yesterday was almost too much excitement and now I’m left with a serotonin deficiency. I’m on the beach and to me the glinting sunlight that reflects off the wind whipped lake surface appears to look more like thousands of flashing camera bulbs in a crowd of blue. I’m done with crowds for now but this I can bear for a little while longer and as I sit with in the boozy heat of the afternoon’s summer sun I start to play the events of yesterday back in my head. 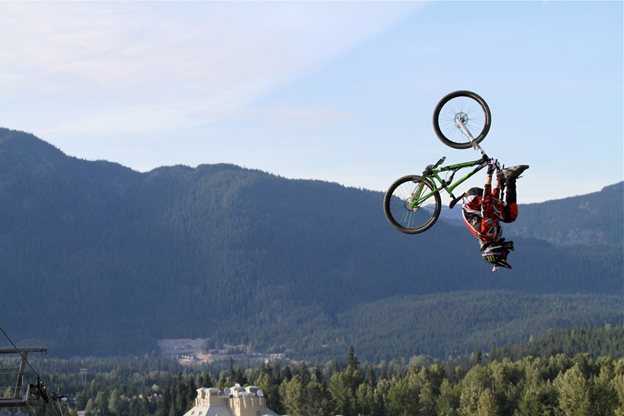 Mike Montgomery got points for originality as usual – including wearing a race kit – but he failed to execute. Photo ~ Malcolm Mclaws

It started off with the first sunshine in weeks, a quiet breakfast in the morning warmth at the Southside Diner reading the papers, then a ride with friends up into the green softness of the Westside trails, before a change of attire and off to the park it was for the unofficial Whip Off World Championships on Crabapple Hits (if you don’t know what this event is or you were in Whistler and missed it then shame on you) before a third change of outfit and back to town for the main event: the Red Bull Joyride slopestyle. 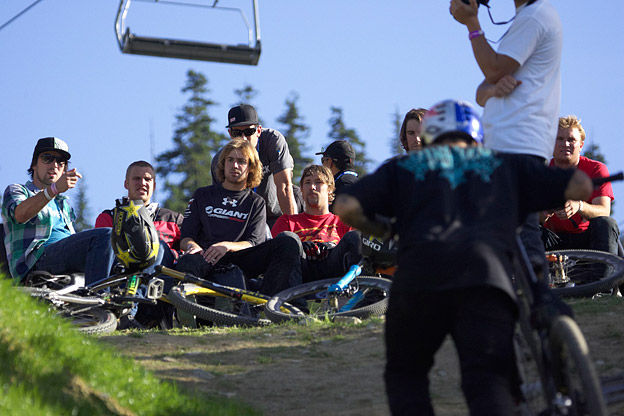 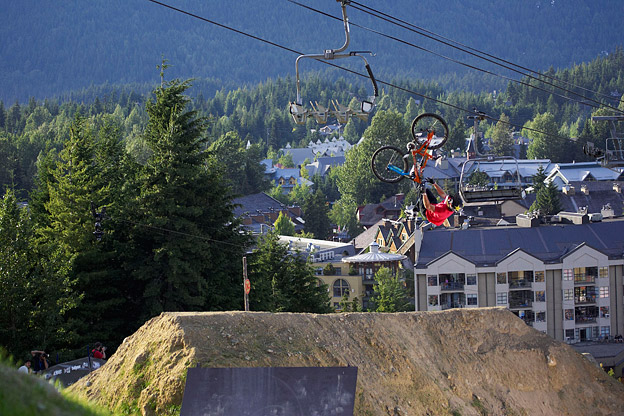 I’ve always tried to explain to people that Crankworx is more than just the slopestyle event. Crankworx is ten days of monster madness (on a sidenote I’m very happy to see the back of product tossing, garbage producing, battery acid pimps Monster. Red Bull have some class and they didn’t just throw their product out willy nilly like Monster have do so over the years. In previous years Monster cans were chugged then chucked everywhere around the beautiful Whistler mountain and this created a massive amount of garbage that someone had to pick up) which includes all forms of gravity riding, competition, eventing, partying, meeting and hanging out exhausted from too many laps of the bike park and the bar scene. I’ve tried telling people that it is about inclusivity
because anyone can enter the races and competitions (except the slopestyle), anyone can come to the party (if you flash your girlfriends knockers at the door men), and anyone can feel a part of something very special. Nothing has changed but this year, for me, the Red Bull Joyride (Slopestyle) really was the icing on the cake. A very big tasty cake. 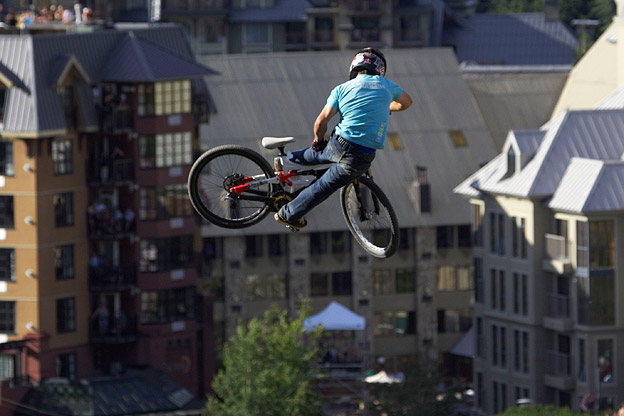 Further confirmation that Darren Berrecloth is one of the toughest SOBs on the planet. Ten weeks ago he broke three vertebrae in practice and he still rode like a champ. Photo ~ David Ferguson. 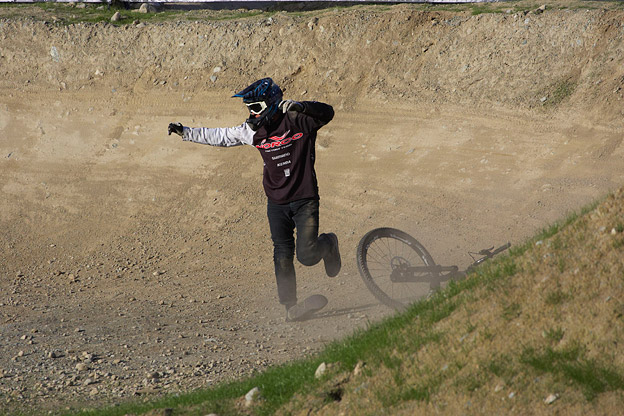 There were highlights and lowlights, but not many of the latter. The only two being that Kelly McGarry sent himself to flat and injured himself and that Sam Pilgrim, because of identical puncture incidents, was unable to show the North American crowd how big his range of insanely twisted gymnastic tricks is. 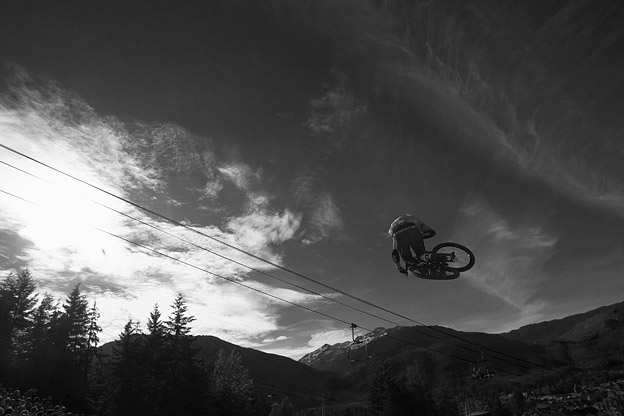 Kelly McGarry never seems to get a break at Crankworx. He made this one look sweet though. Photo ~ David Ferguson. 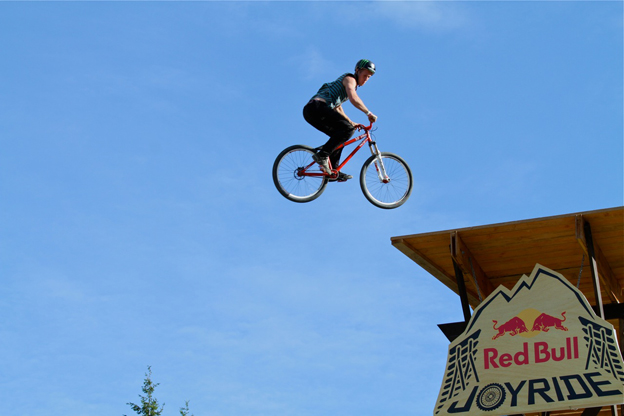 Nobody made the super final on a hardtail. Sam Pilgrim flatted twice on the first move – but he executed a textbook ghost ride afterward. Photo ~ Malcolm Mclaws. 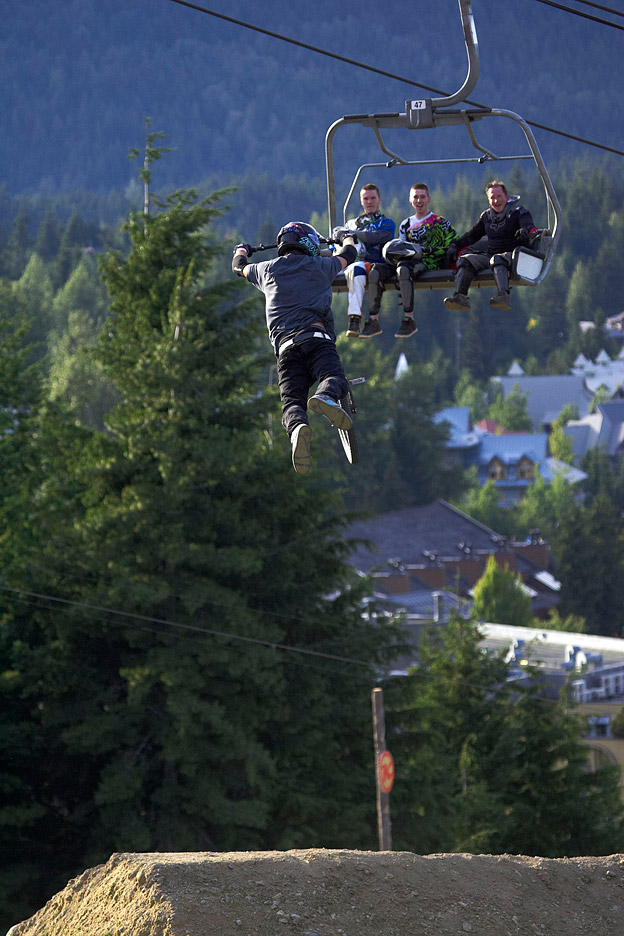 There was a great battle between Cam and Tyler McCaul – until Tyler (above) went down hard and stayed down for several minutes. Cam was another rider returning from injury who rode like the pro he is. Photo ~ David Ferguson.

The highlights were numerous and I will try to list as many as I can.

Semenuk. Taking home the victory on home turf must of been sweet redemption for him but I think it was the relief of the crowd that was sweeter. 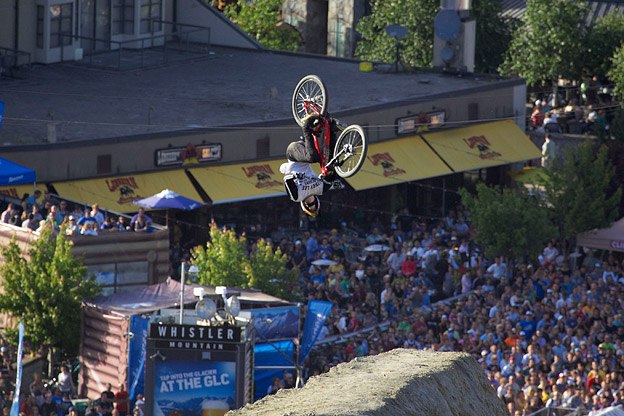 Semenuk hit hard on the final feature on his first run – but he got himself together for round two. Photo ~ David Ferguson.

Cam Zink. He is absolutely without a doubt the most fearless and ballsy rider on the planet but he’s got bag loads of skill and finesse when needed. Front flip out of the huck shack was bonkers and he was the only guy to really trick the hip when he spun a 540 at height. 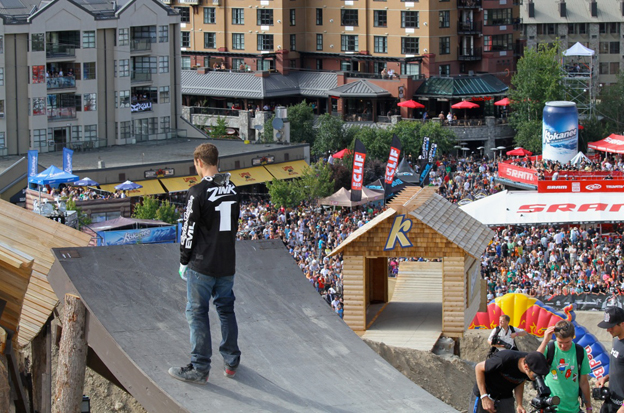 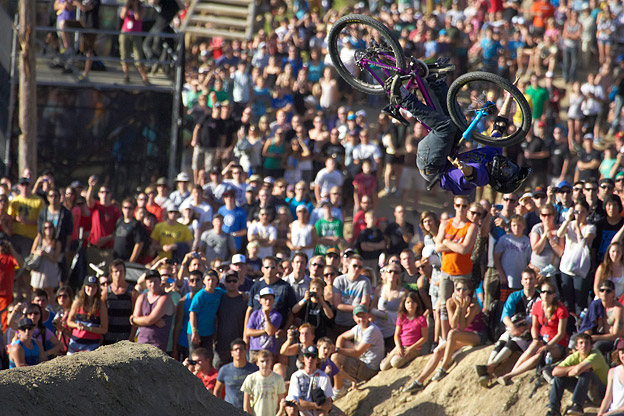 Anthony Messere.You must of heard it before but it bares more consideration that he is only 15 years old. I mean come on, just stop and think what your riding was like at 15 years old. It was probably pretty average wasn’t it? Well then consider what a socially awkward, shy,  uncommunicative, weirdo you were at 15 years old. Didn’t you almost touch cloth every time you had to stand up in front of class and give a two minute presentation? Well this little trick ferret stood up in front of 40,000 people (unofficial made-up by Seb Kemp statistics that I’m willing to use until Whistler/Crankworx come up with their own official made-up statistics) and put on a show that almost turned the whole shebang on its head. 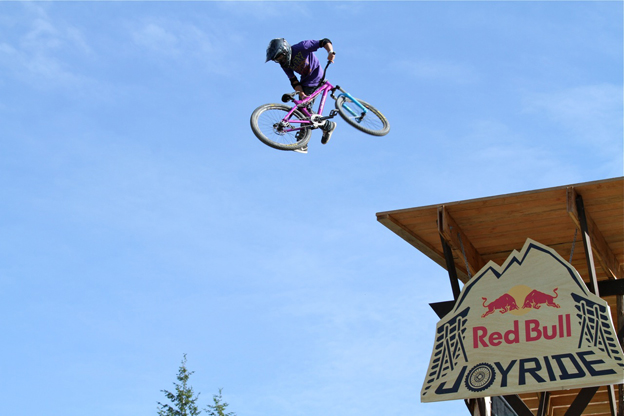 The phenom from Surrey. Anthony Messere makes his debut at Crankworx spectacular and memorable. Aaron Chase declared his flat drop front flip in the super final to be the first ever thrown in competition. Photo ~ Malcolm Mclaws.

That Hip. We need more chance to take our big wheeled bikes into the stratosphere and that hip was just what the doctor ordered. Thank you Joyride construction crew. Even more so, Anthony Messere’s attempt at X-Games Mega Ramp height on the hip is something that will stick in my mind for a very long time. So big but so styled out as well. Thank you young man. 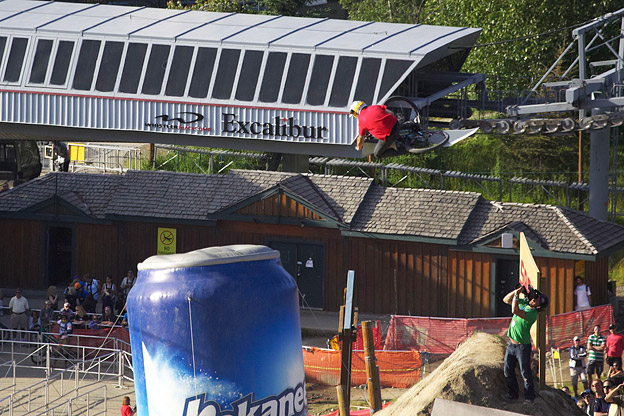 Geoff Gulevich. He made it look so easy. He had style for miles and looks more comfortable than most on a bike. He might not have the very biggest of the big tricks but he certainly does a wide selection and does them very well. I really loved his corked out flips from the huck shack. He must have traveled 15 or 20 feet across on each one. 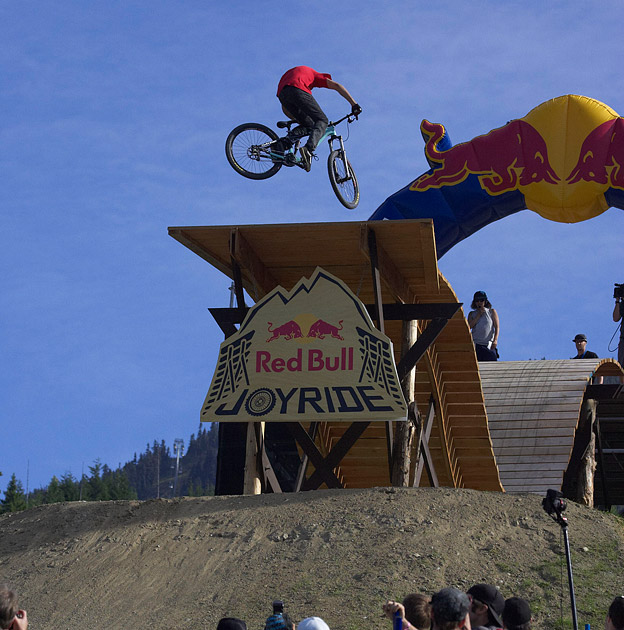 Geoff Gulevich was the most consistent man on the day. Photo ~ David Ferguson.

Injuries. Apart from kelly McGarry doing his elbow no favours and possibly doing something nasty to his shoulder (still waiting on the official report from Kelly himself so until that comes in we will use the unofficial report of the peanut gallery and say that so much of the skin was torn off his arm that it revealed a tentacle underneath, confirming the rumours that Kelly McGarry is a hucktopus) it was nice that the event wasn’t held up or stalled by injuries. In previous years it has been busy times for the guys and gals in red and it has put a damper on the event. 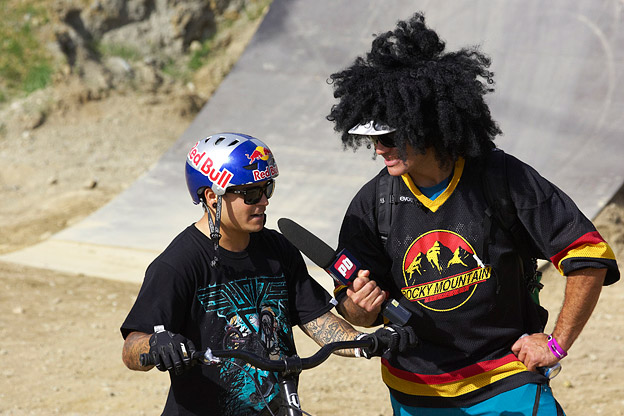 Andreu talking to Brett Tippie. It could have been his day – after he almost failed to qualify.

Andreu Lacondeguy. Ever since his debut at Crankworx back in the days of Kona’s domination of slopestyle and Mavic van boxing wife beaters, I have loved watching everything this guy does. Big, burly, and creative. He sees slopestyle and his sports in a totally different way than most. His no handed superman in the Teva Best Trick was flawlessly executed where other riders ball rode out their tricks. Then to just roll up and throw the double flip so clean in the main event followed by some crowd rallying air punches is just amazing to watch. I’m glad he got the get out of jail free card and got into the finals. This guy is pure entertainment and that’s what this event is all about. 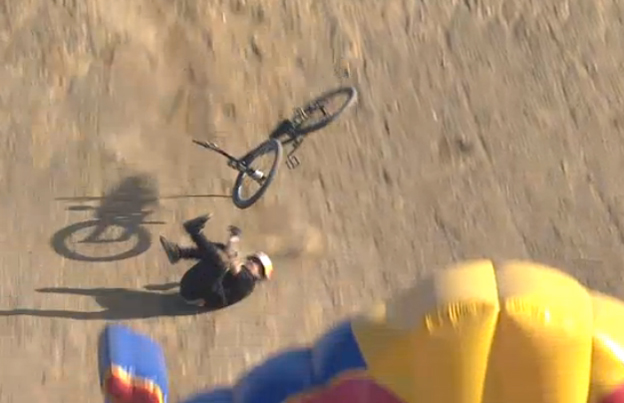 Andreu went down very hard after buttering his double back further up the course. Screenshot courtesy Freecaster. 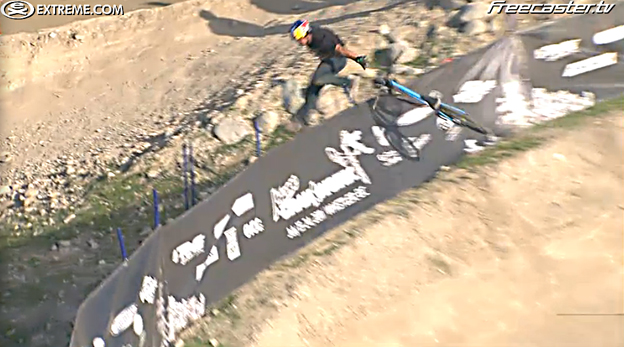 Yannick Granieri doing the running man into a mine field. Somehow he managed to escape serious injury. Screenshot courtesy Freecaster.

The Berm Jump. How on earth Yannick Granneri managed to jump the berm I’ll never know, but then to come away uninjured is remarkable. He landed precisely where the builders had been discarding all the nasty rocks that make up the Boneyard terrain. No one could have imagined that anyone would end up there but no one could have imagined what the loose cannon was thinking – or not thinking – when he went to flat on the jump before and just didn’t bother trying to corner. 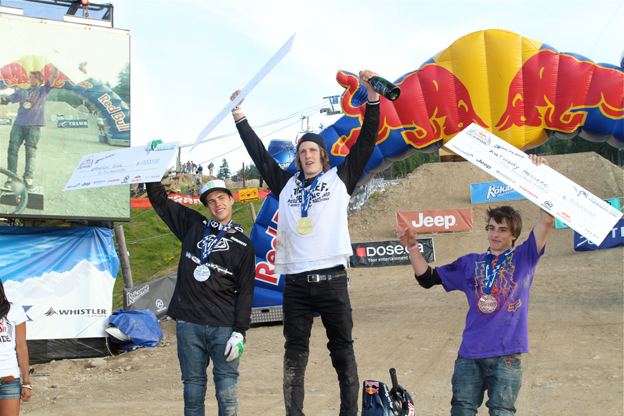 Finally, seeing how all the riders were supportive and respectful of each other. They really are gladiators and they know they have to work together to get through it all in one piece. 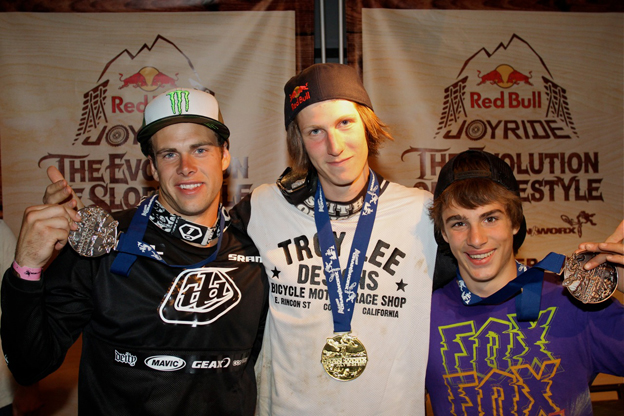 Having the Super Final be for all the marbles would make things much more exciting. The riders don’t want it that way but the fans do. The Super Final didn’t change a single placing this year.