* This article was originally published in May 2011. Tim Coleman’s review of the Turner DHR resulted in one of the liveliest discussions of the year on our bulletin board, a discussion that spilled over into other places on the web as well.

The old Turner DHR frame was a privateer favourite, which over time developed quite the following.  It looked great, was simple, dependable, easy to maintain, backed by legendary customer support and ripped up the race track. Any successor would have some big shoes to fill. In 2009 pictures started floating around of a new DW-Link DHR, and then by late 2009 prototypes started popping up. Turner kept the public well included through the lengthy design and test process, so when this bike was released for purchase late last year the fan boy salivation factor was cranked to 11. When Cam contacted me saying there was a new Turner DHR available for test I jumped at the opportunity.

The new Turner DHR is a complete redesign from the old frame and features Dave Weagle’s legendary DW Link suspension platform. Dave Weagle has designed the new DHR to utilize a “dual progressive shock rate” and “anti-squat”, although I can’t figure out why these characteristics are good for a DH bike. The new DHR sports some very aggressive geometry; highlights include a 63.3 degree head angle, 442 mm (17.4 inch) length chain stays and a 343 mm (13.5 inch) bottom bracket height. I really like some of the details on the new DHR. The shorter than normal 1.5 inch head tube gives the user a huge range of adjustability for bar height, and head set styles. The grease ports on the bearings are a nice touch that should enable the user to keep fresh grease around the pivot bearings. I like the slick little cable guides and cable routing in general. The entire frame is stiff laterally, which is impressive given how close all the pivots are. The new DHR is no feather weight but weighs in at a respectable 3583 grams (7.9 lbs) for a large frame without shock. I like the idea of the replaceable brake mount threads and shows Turner fully intends this new DHR to stand the test of time. For the most part the DHR is beautifully put together with top notch workmanship from the folks at SAPA. As far as design dislikes are concerned I think Turner should have included a rear fender ala Santa Cruz V10 to protect the very exposed rear shock.  From reading some forums it seems that the upper link requires modification to fit certain shocks, which I think is a major design oversight. 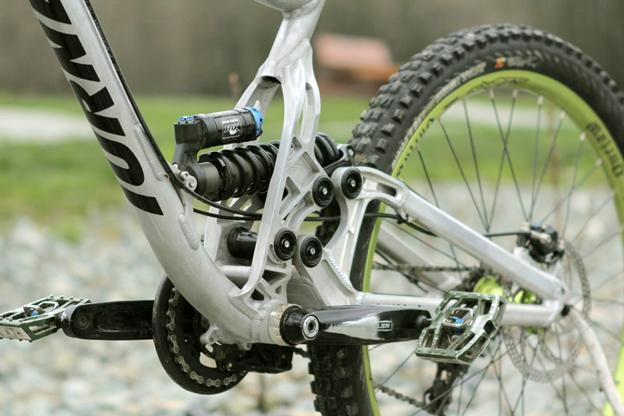 Aesthetics are always a personal thing. I quite like the somewhat industrial look of the new DHR. However some chamfers on those sharp CNC’d edges would be a welcome addition 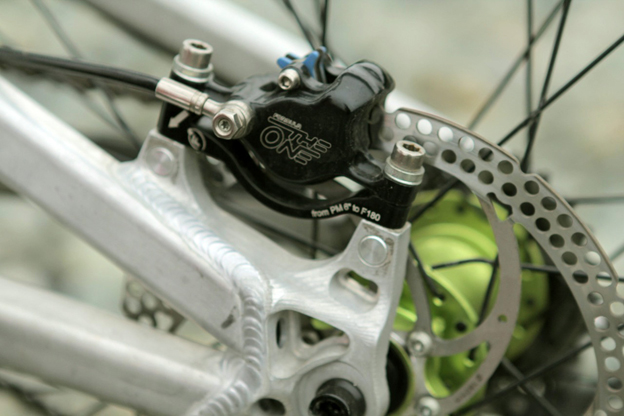 The barrels in the rear brake post mounts are replaceable if damaged. Impressive attention to detail from Turner 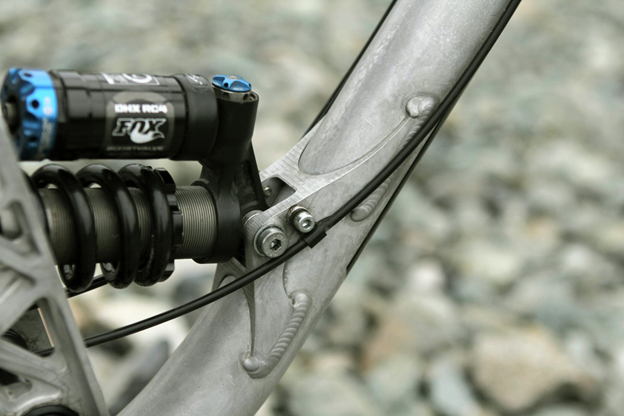 The shock mount is CNC machined from billet and includes mounting for those nice cable mounting straps. With so much of the new DHR being sculpted by CNC machinery in the USA I can understand the price

I won’t be coy; this is an expensive piece of race kit. The frame and a Fox RC4 shock will set you back $3499 of your hard earned Canadian dollars. Complete bikes can be had for three prices points of $5799, $6499 and $6999 CDN. While the pricing isn’t cheap, you are buying some exclusivity in a small production run frame that is beautifully made in the USA. If you’re in the Vancouver area and interested in purchasing a Turner bicycle, the kind folks at Steed Cycles, Velocity or Secret Cycles can help you out. The big question is; when rubber hits dirt does the DHR cash the cheque its price tag will make you write? 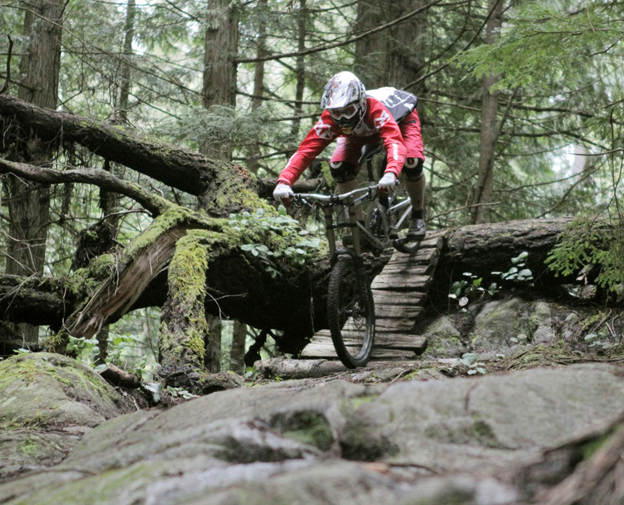 Often I take new bikes for their first ride down Ned’s. Ned’s is a relatively high speed rocky trail that is rougher than Charlie Sheen on a relapse, which makes it a good spot for getting suspension dialled in. Unfortunately my first run down Ned’s on the DHR was about as fun as being stabbed. The Fox 40, which I’m sure needed a rebuild, made it feel like my hands were directly connected to the front wheel, and the rear end did little to improve the situation. The chain slap was louder than that pink and yellow TLD kit from last year, which brewed fear that I’d need another chain stay for lap 2. In an act of desperation to enjoy the new DHR I added some self adhesive Velcro to the stays and replaced the Fox 40 with my beloved 888. 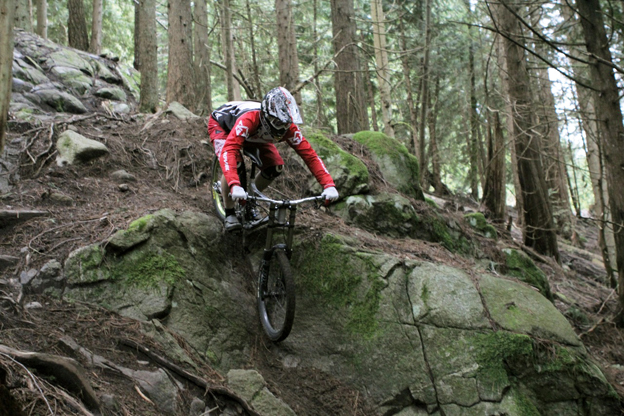 The 888 significantly improved the absorption of bumps up front, but whenever I got the bike up to speed there was still a real harshness to the ride. Those that rode the bike and I were convinced that there was something wrong with the rear shock, it felt like the shock was spiking during the compression stroke. To ensure the Fox RC4 was working properly I tried it on another bike, which proved the shock was functioning flawlessly. I was using a 400 lb/inch spring, which was recommended by Turner, and is what I normally run on an 8 inch travel bike that uses a 3 inch stroke shock. In a parking lot (and on smooth trails) the DHR felt very plush. I looked at Dave Weagel’s set up suggestions and noticed that his recommendations were to substantially reduce the compression damping, lower the Boost Valve pressure to near minimum and maximize the Boost Valve volume. But still the DHR was harsher over high speed terrain than any of the DH bikes I’ve ridden recently. 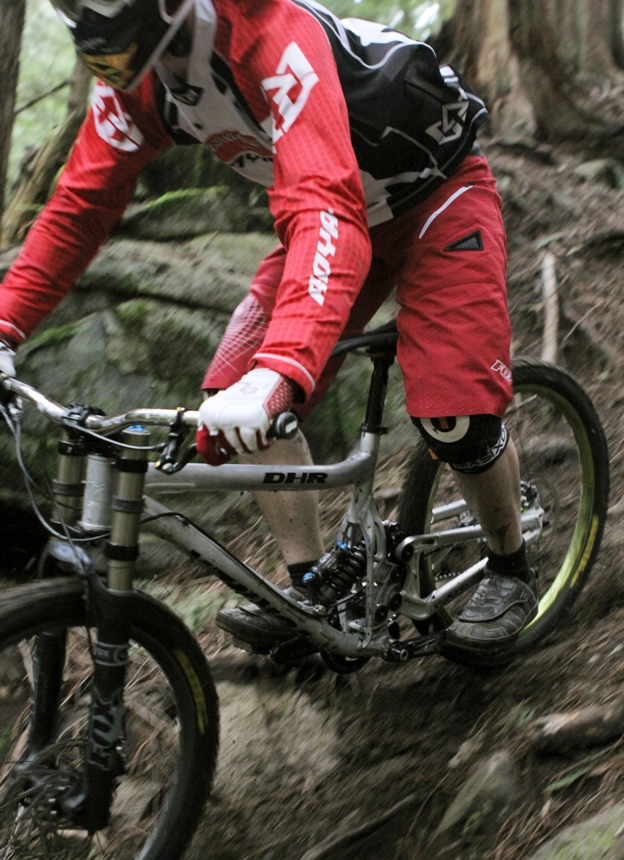 The DHR approaching bottom out. With little separating the pedals and the trail at the best of times a softer spring wasn’t really an option

Despite the harshness to the ride I liked how lively and easy the DHR was to ride. At speed it felt nimbler than the geometry numbers would suggest. Of course when the speed dropped on the tighter more technical trails the DHR was a bit of a handful. Getting the most out of the new DHR required an aggressive body position with a heavy forward bias. When ridden properly the new DHR was a pleasure in the turns and was easy to push to the limit of traction. Due to the slack head angle and low bottom bracket height the DHR was easy to ride down steep technical terrain and inspired confidence. The DW-Link DHR pedalled exceptionally and may well be the best pedalling DH bike I’ve swung a leg over. Punch the pedals coming out of a turn and the DHR accelerates like a stabbed rat. 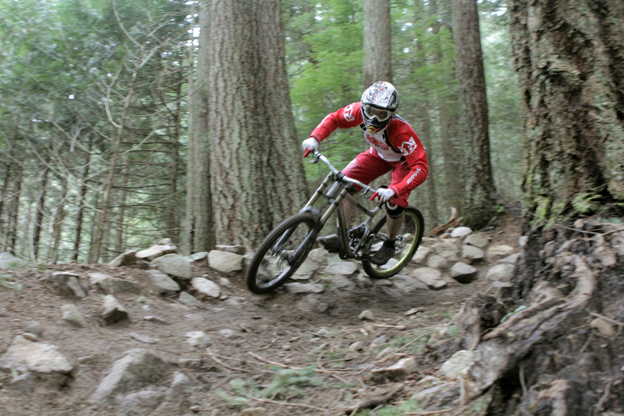 The new DHR required a really aggressive riding position to get it to turn properly, but when done right the bike rewarded you with biblical exit speed 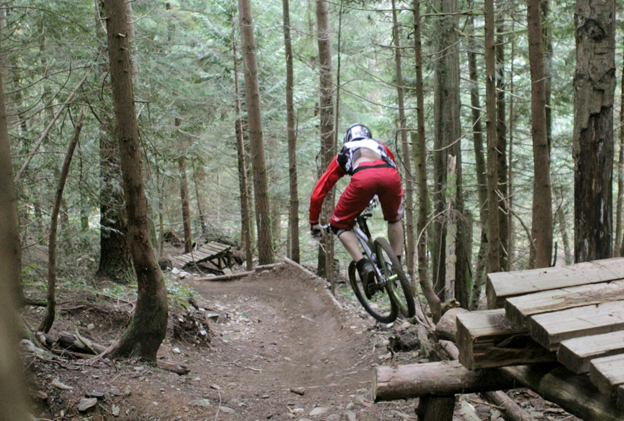 This was a shorter than normal test. I only had the bike for a few weeks, so I can’t comment on the frames durability and I can’t profess that I got the bike completely dialled in. To conclude, positives are that the DW-Link DHR is beautifully assembled, pedals extremely well, is laterally very stiff, and has World Cup DH race geometry. However for the price I expect the bike to be near perfect, and it just isn’t. I disliked the harshness of the rear suspension, the chain slap, the lack of compatibility with all shocks, and the exposure of the rear shock to debris off the rear wheel. In the time I had the DHR I scoured forums for setup tips, swapped parts, applied Velcro, tried everything I could to get the most out of the bike, but walked away from every ride underwhelmed. The new DHR isn’t an awful bike and in the right (and likely tough) hands can be ridden very fast down a race course. However I’ve had more fun on just about every other bike I’ve ridden recently, and they were all  were easier on the pocket book. 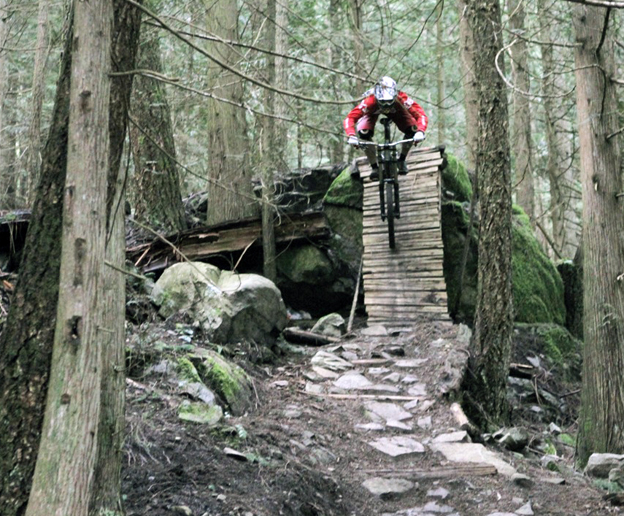 Note:
On The Edge – the distributor of Turner in Canada – is shipping us a new rear shock and a fork to redo this test. The bike was a demo from Crankworx last summer and they are concerned that the shock may have had the wrong tune or it may have been faulty in some way. Stay tuned for more on this.

Have you ridden the DHR? Maybe you own one? Does your opinion mesh with Tim’s? Tell it here…