The trail with the most varied combination of North Shore technical riding is still undergoing changes started well over a year ago. Digger’s work is the talk of the trails these days, as he’s taken on a new project on his most famous piece, Ladies Only. As such, Cam and I took it upon ourselves on a fine afternoon to see what the buzz was all about. 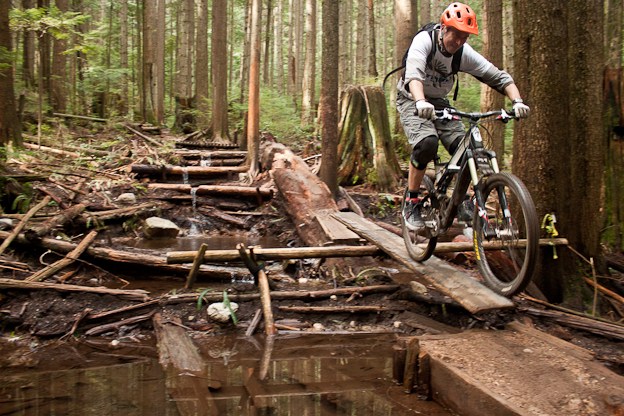 In the past few months we’ve seen the heron pond expand into a cascading series of pools, where going back for another run is like playing Russian roulette. This is one of the reasons my camera goes in a plastic bag inside my backpack. When asked for comment regarding the heron pond area, Todd declined but did mention that it is a very nice, tranquil, relaxing place with the cascading levels of water.

I’m fresh off a hardtail tour of the Sunshine Coast with my trailer; after 10 days of towing 60 pounds of camping and riding gear, I feel like an uncaged animal. I was itching to ride my Wildcard, and with a fresh pair of lightweight hoops that extra energy made the pedal up Fromme on a sunny spring day all the more pleasant. 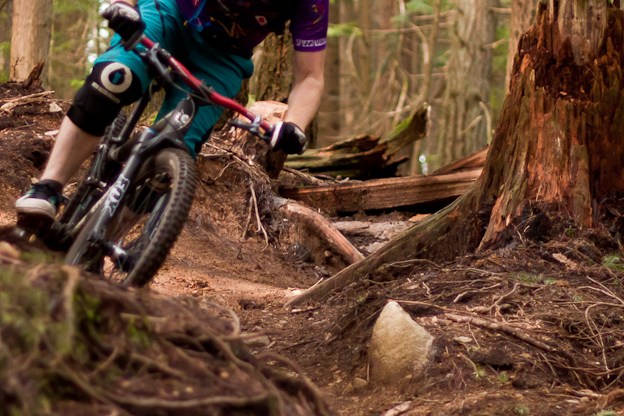 The Coast was great, but I yearned to bottom out the full squish on Mt. Fromme. Photo ~ Cam McRae

The berms in the upper section of Ladies Only went in early last year. Digger seems to be able to see into the future, as Bobsled was built that summer with more berms than Fromme had ever seen—and a subsequent increase in the gravity crowd on the pedal-for-your-turns hill. Another 6 months goes by, and Digger’s at it again, in a refresh of his venerable trail’s lower section—not actually Ladies at all, but Upper Skull or Big Stupid depending on who you ask. 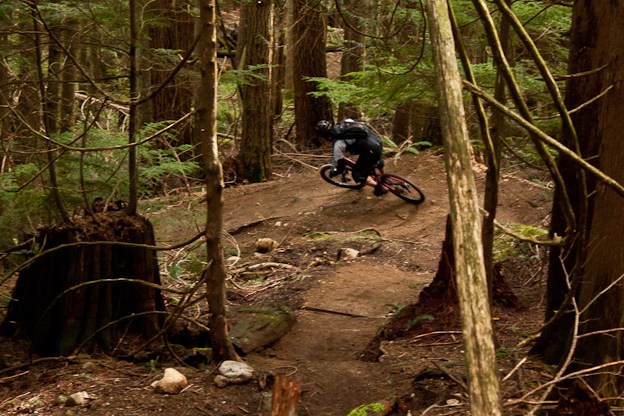 Smooth and wide: Digger continues the new school injection on Ladies Only.

Regarding that distinction: you may not have noticed the fork in the trail as you hammer for the top of the knoll. The Big Stupid came into existence as an alternate route from that point where the trail forks, possibly because the option on the left—the continuation of Ladies down to the Baden-Powell and Lower Ladies—is steeper and more technical than the line on the right, but also because of the draw of the namesake of the newly-revamped trail: a massive exposed rock face with numerous lines—one of those being Big Stupid.

As soon as you crest the trail’s only climb section (which has also seen fresh dirt recently), you’ll find a couple of natural kickers built into small doubles. As Cam and I took a rest at this spot, I mentioned that you don’t get to say you cleaned the trail if you don’t make this climb. Just at that moment, Omar came pedaling up to the top of the hill. 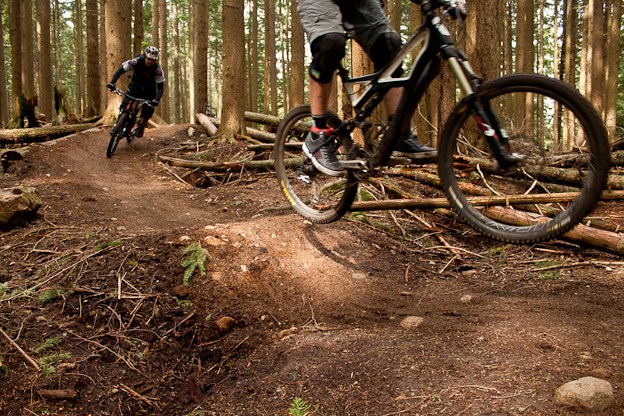 Double up! A little air to start the new work.

The scale of the new work builds as the doubles lead into a smoothed out root shoot with a little booter at the top. Following this is a nice wide berm with an almost-wallride feel to it. It’s one of those corners you can really dig into, helping you rocket toward the next section—which was always tough to flow without pedaling.

In speaking with Digger about this work, we found out he received some unexpected help from Luni, an enthusiastic kid from Slovenia. Luni contacted Todd in advance of coming to BC on vacation, indicating his interest in doing some days on the trail with him. He helped on the big berm and on the berm-to-berm section below.

Digger said that while Luni had done some trail building at home, the powers that be don’t support it; building trails is against the law there and, consequently, most of the work Luni has done in his homeland has been taken down. In addition to that silent list, he can now say he’s contributed to the legacy of a Shore favourite. 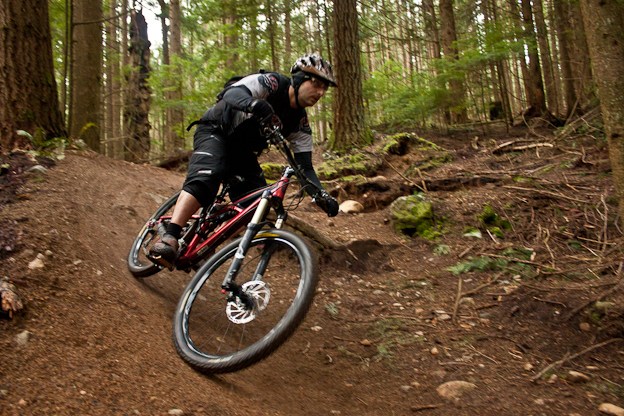 Omar Ab Del Al (of NSX fame) has returned to the Shore – and he likes the way things have progressed.

As you come around big new bermed corner and on to the first of two rock faces on the trail, a new ladder awaits. Certain features on a trail make you stop and ponder how the idea even comes to the builder: this is the kind of stuff that’s just not being built these days. With a trail like Bobsled seeing a ton of traffic, you might think the old days of the Shore are over. With this line, Digger says “hell no!” The old line has even been preserved as an underpass for those who don’t like the new flow option. 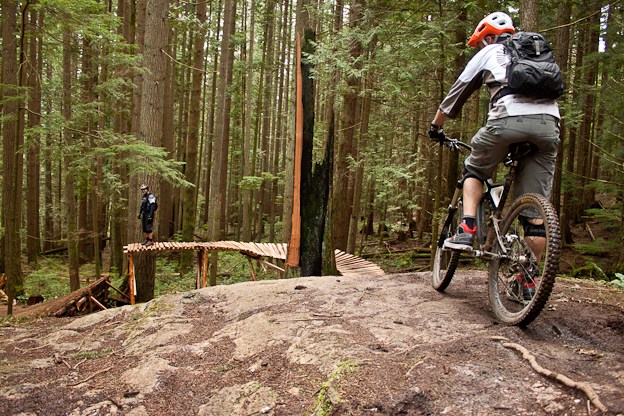 We knew it needed to be sessioned, but as with any new trail feature, it also had to be scoped. In Digger’s own words, “it’s not that dangerous…”

Cam and Omar both hit the bridge and loved it. 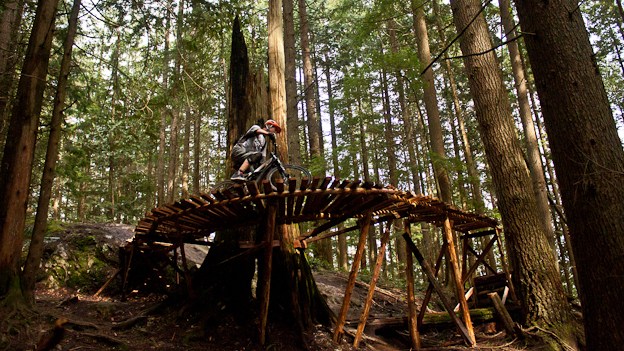 The burned out stump makes it interesting.

My turn—pass camera to Cam. Round the corner, quick pedal, jump—whoah! sideways what!—slam pshhhhh clang! My derailleur tried to eat my brand new spokes but the wheel would have none of that and instead the derailleur was the victim and the tire burped as if to say “not this time, derailleur.” I don’t specialize in bad landings, but doing so on a freshly built wheel was obviously not a good thing. 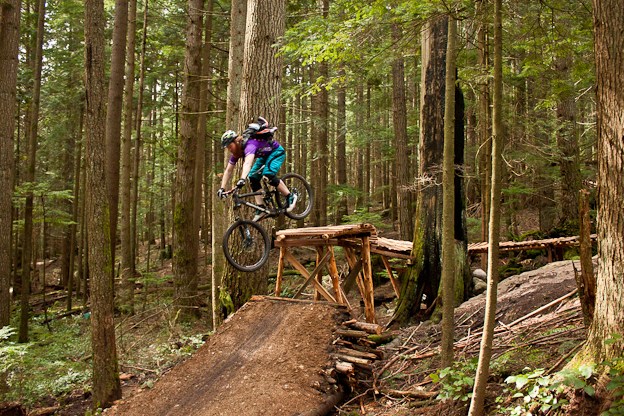 So, what do you do when you smash your drivetrain to pieces? See if you can ride the new stunt chainless, of course! After removing the chain and derailleur, I pushed back up. After three attempts with just a touch too little speed, I took even more speed into the fourth try and lost the front wheel over the edge. OK, time to give up. 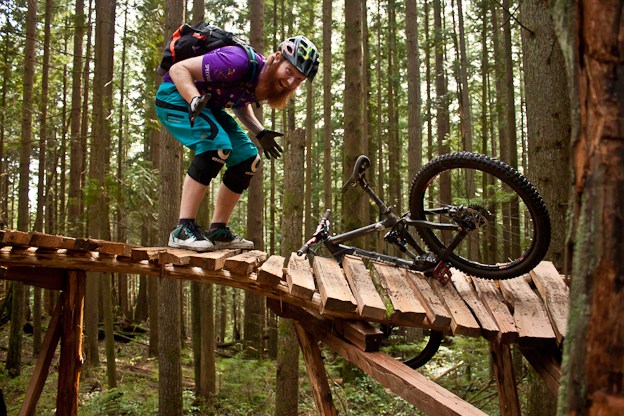 I will take credit for being the first to attempt this stunt chainless, though! Photo ~ Cam McRae

Cam and Omar each hit the new bridge again as we finally decided to move on. I love how a catastrophic mechanical is completely eclipsed by good times in the woods with friends. 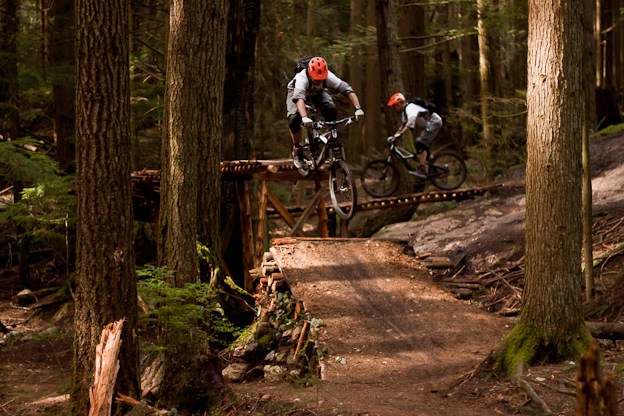 And if you thought the fun was over, think again. The new ladder’s transition drops you right into a nice berm-to-berm jump and another sweet carver before you head down to the rock face of the section’s clouded name. All three of us had a different line choice here.

The racer boy, the fast and fun, and the unnecessary airtime all have their place.

As for the name of the trail? Well, we have the authoritative statement. Digger has confirmed that the name will be set in stone: the District of North Vancouver’s trail crew is back at work on Mt. Fromme, and one of their tasks will be to put a sign at the top of the Big Stupid.

The rejuvenation of Ladies Only—and now Big Stupid—has involved a lot of gold dirt and a ton of effort on Digger’s part in improving drainage and water flow on the trail. For a detailed look at this side of the work, pick up a copy of his most recent video, The Last Digg (available at the nsmb store, your local bike shop, or from the man himself). If you see Digger on the trail—which is inevitable—stop to thank him. You’ll see that there’s a lot more to Ladies Only than mind blowing stunts and smile-inducing curves.

Along with the Shore’s natural topography, these features keep us coming back to our favourite trails. With the new work on Big Stupid, Digger has ensured that we will keep coming back; with his dedication to trail building, you never know what’s around the corner.

The sun is shining on Big Stupid.

This work by Digger was partially funded by the MEC, nsmb.com trail initiative. There’s a video to show you some of the work done here…

Anything to say about Digger’s latest work? Pitch it here…