I am a sieve. Pour things into me and all those things just stream out like a crowd at a surprise Charlie Sheen appearance. As fast as I pour things in they just keep flowing away down the brain drain. Of course I am talking about my mind and not my bowels; I would not dare be so crass for you lovely gentile NSMB readers. You see as I move through the dawdling winding B-roads of life, my capacity to preserve knowledge is diminishing. I am not old enough to be mentally and physically incontinent, so age can’t be the reason. An adolescence of experimentation may play a factor, but even in the tallest of big fish stories I doubt my party prowess was wild enough to restructure the wiring of more than a tea kettle, let alone my mind. So by simple deduction I believe the internet is responsible for turning me into a hollow gormless beast. The advent of Google and Wikipedia has turned my retention of knowledge into something I need to ask Google about to start with. If you drew a graph of my forgetting curve then it would probably be a nearly straight vertical inelastic red line.

Sometimes you just have to get your feet wet to find the mouth watering singletrack.

Like a boy with my finger in the dyke, my efforts to preserve knowledge is futile. Since information speed is now weighed against an index of 256 kilobites, my brain has just stopped working as it once did. I don’t remember any useful information or facts, just vague abstract thoughts, the names of girls and a black list of late night black out spots. There just seems no reason to have to remember anything, at all, ever, when a faintly correct answer is available at a click of a mouse. I despair for the yoof of today; how on earth will they cope in life now that they don’t need to learn anything? Everything is instantly available at their grubby little fingertips through the power of Intel Inside. The young ‘uns are rather good at interneting though, so they don’t have to worry too muchly. I wonder how the kids get on with exams these days. Maybe exams will be reformatted to be more like a game show where you are given three lifelines; Google Search, I’m Feeling Lucky, and Ask Jeeves. 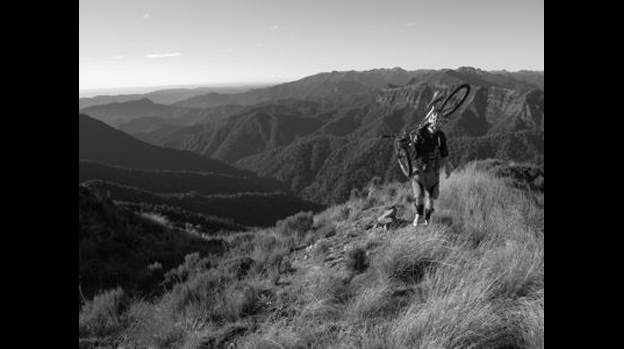 This is taken right before sunset at about 1200metres above the Tasman Sea. A trail on the map turned out to be just a poled route that stretched on and on and on turning an all day ride into an overnight mission. We had met Allen Birkett a few days before this and invited him along. He had no idea what sort of epic mission he was going to find himself in because of out insatiable thirst for the singletrack. We weren’t lost, but we had been mislead by maps, guidebooks and the recommendation of friends.

But one thing I am not so bad at is remembering directions. If I have traveled a journey once then it is seared into a part of my brain which would be far more useful if it could help me count cards or predict lottery numbers. I’m pretty good at having a good idea which way is which and where here relates to where I want to be. It’s like my mind works like a fuzzy matrix or a scene from Tron, albeit a slightly less cinematic version. 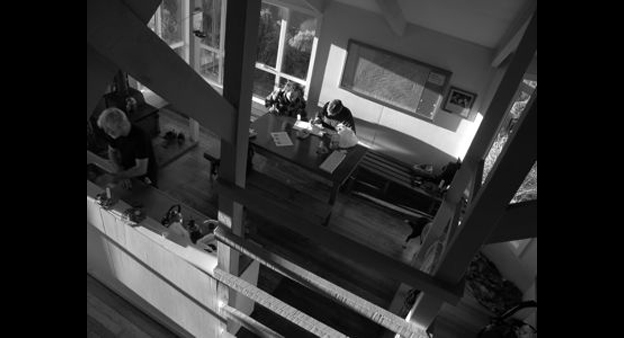 Ces Clarke hut at the top of Creosus. We got there after dark to find a Kiwi project volunteer called Joan who was happy to make us a cup of tea and share out the chocolate. This was one of the warmest nights of my life.

My ability to remember routes stretches to mountain bike trails but does not include an encyclopedic knowledge of trail names and statistics. If you asked me about a ride three years ago someplace I could describe the entrance way, what the trail was like and list my favourite three corners, but often I would not be able to tell you the name. 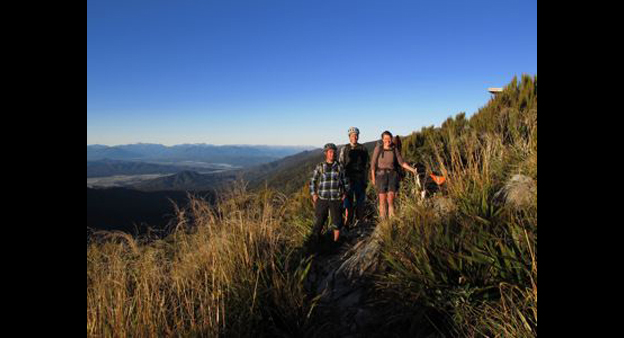 Joan and dog Sky track, monitor and keep the Kiwi’s safe in the hope they can become better reestablished in the NZ wilds. In the Paparoa range they have several Greater Spotted Kiwi birds, which are the largest of the species (up to 50cm tall), and in the middle of the night we were treated to the whistling of a male near the hut.

Getting lost is not an option. It might appear I am lost, but it just means the map I am reading doesn’t actually bear any reasonable resemblance to reality. This happened to me yesterday – or about three weeks ago if you are reading this the first day Cam posted it, or possibly much much later if you did manage to pull this detritus out of the Wild West Wonderland garbage dump of content. I was riding in Nelson, New Zealand trying to explore what trails were on offer on a day when there seemed to be no one available to show me around the good stuff. I had done the logical thing and gone down to the bike shops to find a local trail map, but of course, being a sunday none of the half a dozen half-arsed bike shops were open so I went to the tourist information centre and purchased a map which was titled Nelson’s Best Mountain Biking Tracks. Now when you pay $5 for a map with such a boastful and authoritative title you really expect the best, but this being mountain biking I knew there would be some deficiencies. There are very few mountain bike maps or guides that are ever informative, detailed, up to date, or that can accurately describe what a Best Mountain Biking Track actually means. Mountain bike trail maps are usually more than vague caricatures of the terrain to which they allude to. The phrase ‘more useful to wipe your arse with’ comes to mind, but then again they are printed on the kind of paper that I wouldn’t use to wipe toothpaste off the bathroom mirror. 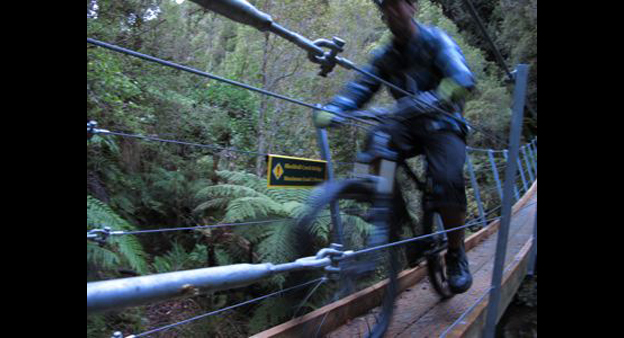 One of the many restored cable bridges on the Croesus track. An old gold mining track that carves through incredible bushland and makes for the best breakfast rides.

This particular map missed whole roads out, added some extras that may or may not of existed around the time of the Moa, and handily put in directional markers that showed the direction you should ride the trail if you are a droopy eyed armless child. So I doubt I would have been so confused as to which island I was on if only the map hadn’t been put together by some half-witted lost boy years ago. Just like the map is not the territory, the map I had purchased had no relation to maps themselves. I could have got better directions from a garbled telephone conversation with a stroke victim who rode the trails one time when he was hammered drunk and I could of drawn a better map on a hessian sack using a blunt pencil whilst wearing two pairs of winter gloves. 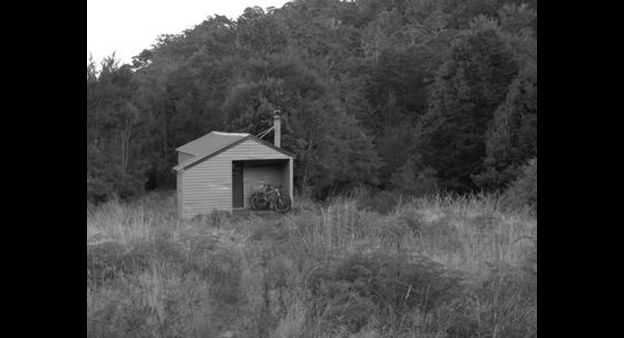 Browning hut. This is a shorter ride in Nelson but we decided to ride up at night, camp out then ride it out at first light. A warm fire, beaming stars, and good sleep followed by the rockiest rootiest helter skelter rides outs.

It isn’t just Nelson that this happens in. The whole of New Zealand is pretty confusing for first-timers and even the eighth edition of the now legendary Kennet Bros. guide is no guarantee. This weighty (relatively speaking) tome still possesses the writers biases for considering multi-day rides that may require more hike-a-biking than biking as being superior to anything else. Reading this book has had me thinking the ride I was about to go on could be a snooze fest that is as worthwhile as keeping a diary of toenail cuttings, but it has usually turned out to be an incredible ride that was worth writing about in my pink diary highlighted by glitter and love hearts. I have once been mistaken into thinking a highly-recommended eight hour mountain pass epic was worth exploring, but I came back with blisters on my heels and nothing more than bad memories. 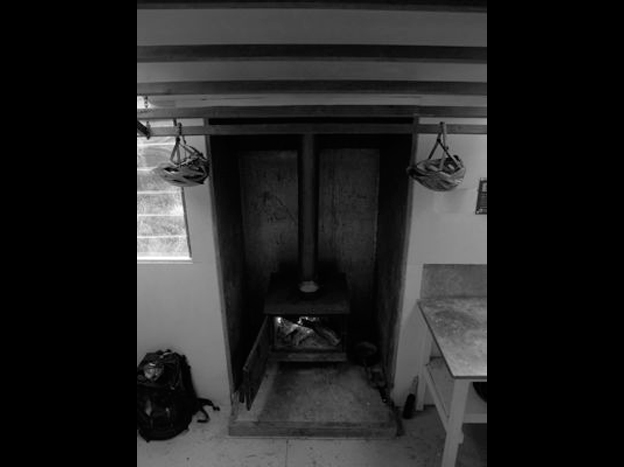 The Browning hut fire with helmets drying out after the starlit ride in.

This is a wide problem with mountain biking. If you go somewhere new then you had better A) have someone you know and trust to show you around B) prepare to stumble around finding all the mundane trails, or C) get so frustrated that you give up finding the three-degree climbing singletrack and ride up the sun scorched seven-degree fire road till your bladder runs dry and you are left looking like a bloodied macadamia nut gasping for air whilst clawing at the sky whimpering ‘why’? Why is there no reception for my f-ing phone here? I could ask GoogleMaps to save me damn it. 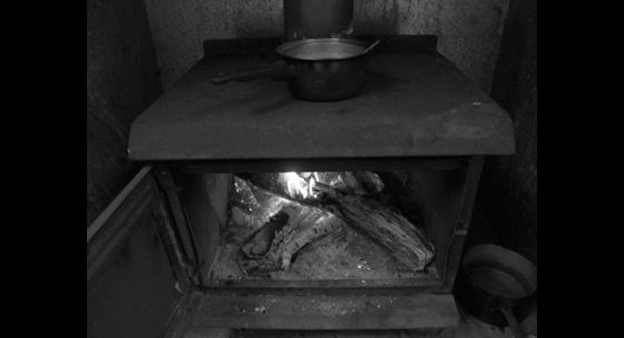 Sometimes the simplest things warm the heart and soul. A fire is good at doing this.

Big Mountain Adventures have just this year started a 12 day trip through both the South and North Islands. Called the Silverfern, it takes in some of the must-do rides in New Zealand. This trip is aimed at the ‘all-mountain’ rider who wants to be shown the best singletrack. To do so, Big Mountain have partnered up with the friendly and knowledgeable Dan McMullan of FreerideNZ. Local knowledge and worldly outlooks is what this trip is all about. This is not an advert, but I know Dan very well and after looking at the itinerary closely I can recommend this trip if you have a short time in New Zealand but still want to be seeing and doing the best riding.

If you have more time (say a month or two), then it is all about meeting locals, sniffing out the hidden gems, and occasionally getting a little…err, how do I put this, lost perhaps? There is no central resource for trails and things are repaidly changing in New Zealand. Trails get closed, and new ones are built or opened up all the time. Buy a copy of the Kennet Bros. book (available everywhere) for some ideas but read between the lines and find out for yourself what ‘singletrack’  or ‘unrideable’ can mean. Make friends with some Kiwi riders and ask around. You will no doubt get dragged along on some crazy missions and find the sorts of gems that keep mountain biking interesting for even the most stern faced singletrack addict. But be warned, after five years of coming here, I am still discovering more and more gems. Like Alice, I have fallen down the hole in search of the white rabbit.

Have you a) ridden in NZ? b) lost grey matter because of the internet? c) wished the armpits of mountain bike trail guide writers were infested by the fleas of a thousand camels? or d) all of the above? Indicate your answer here…