Late to the Party – Part IV

When my school semester ended and I had the chance to get out on the bike a number of days in a row, my comfort level on the Wildcard increased significantly. Having seen my photos from the last ride on Pipeline, Andrew was stoked to get out there with me. With a dusting of fresh snow and the low-angle solstice sunlight, we had a shoot that will go down in the history books of Handsome Gentlemen Weekly.

Snow adds another element both visually and tactically.

Mr. Summers will gladly push up a section over and over until you get the right shot. Sessioning spots like this is as much about the rider’s comfort as it is the photographer’s. Of course, after a few runs down the rollers, Andrew was feeling right at home on the Brodie Ethos, and we knew the sun was just asking to be exploited coming through the trees. 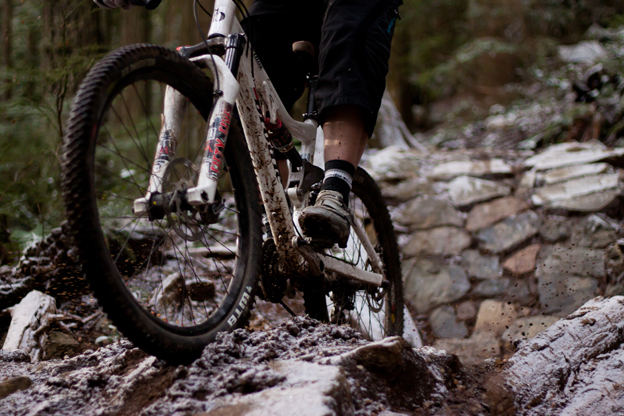 The rock rollers provided the perfect session with the sun and snow. 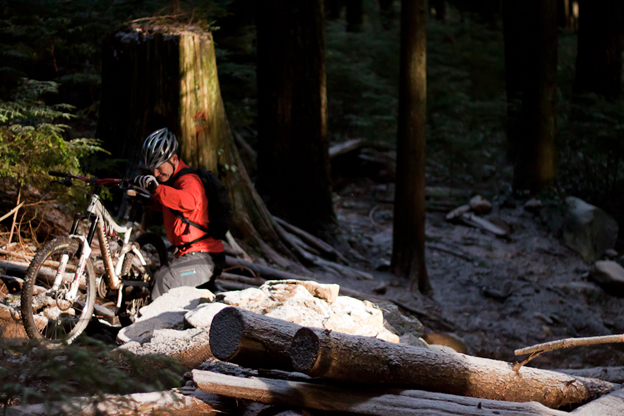 Up for another run… 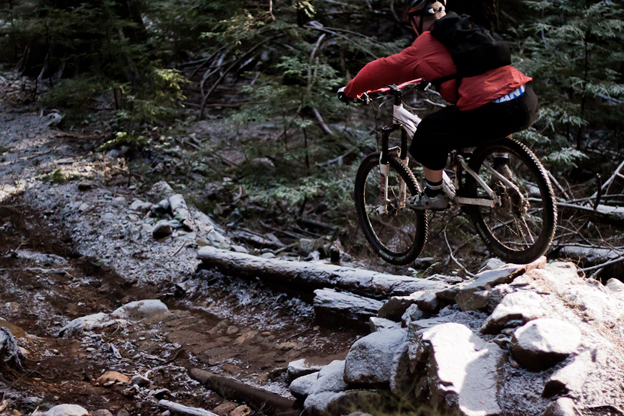 Riding with the Handsome Gentlemen means everyone gets their turn in front of the lens, and after watching Andrew blast the section half a dozen times, I was stoked to hit it. 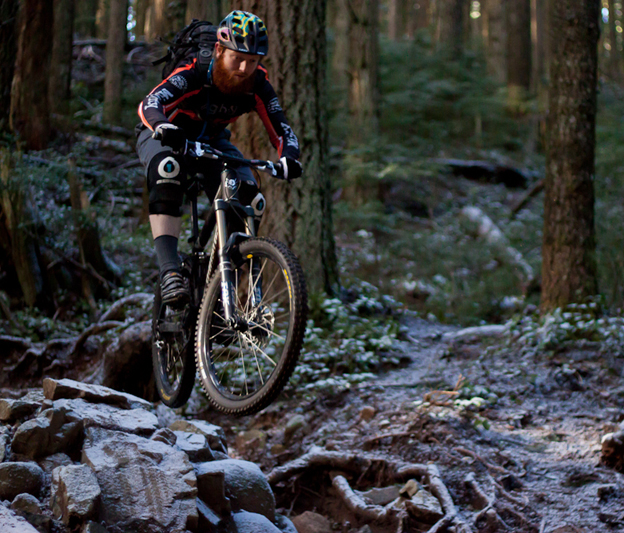 HGW: skills on both sides of the camera. Photo ~ Andrew Summers

Finished with another successful session, we headed down the trail that apparently nobody else had ridden. In fact, we didn’t see a single person on Pipeline that day. Maybe everyone else was out on the ski hill. 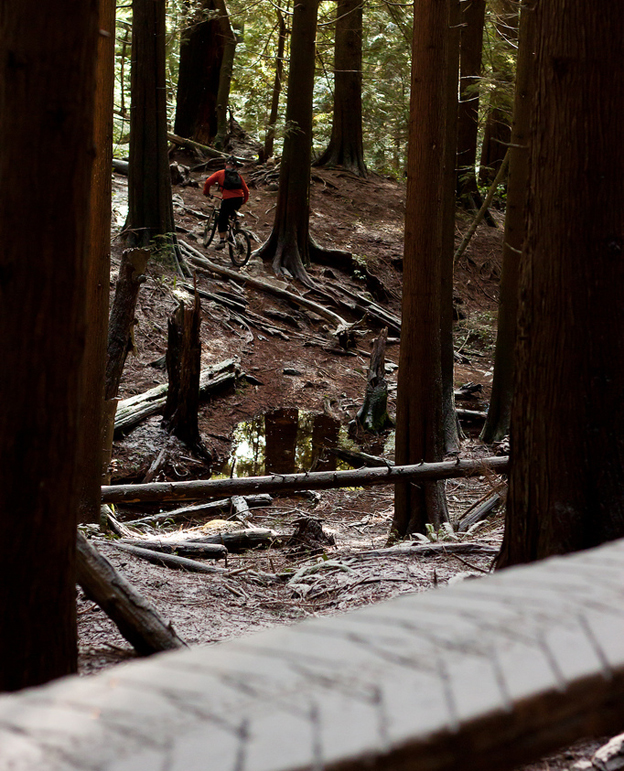 Fresh tracks still count when you’re on a bike, right?

The Wildcard was smoothing out the trails to get me going faster than ever, and I was feeling excellent after a solid week’s riding. I was very happy with my decision to buy a jumping bike, and decided it was finally time to attempt a drop that had been staring me in the face since day one on the Shore. 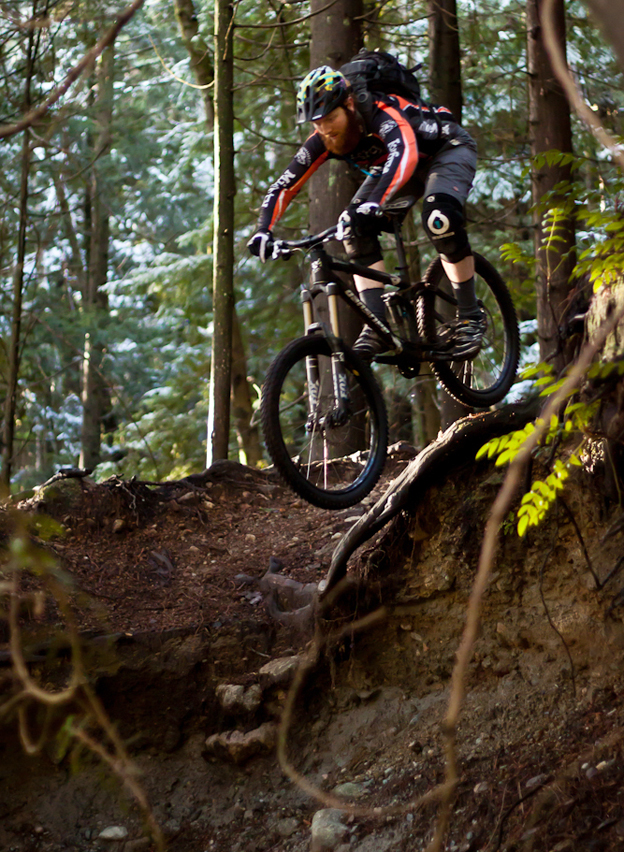 When you’re trying to get a shot, you might have to attempt the line a few times. This happened to be the first shot, though. Photo ~ Andrew Summers

Between semesters, I had more days on the trails than off. Weekday solo laps help to avoid the crowds that have become the norm on Bobsled. 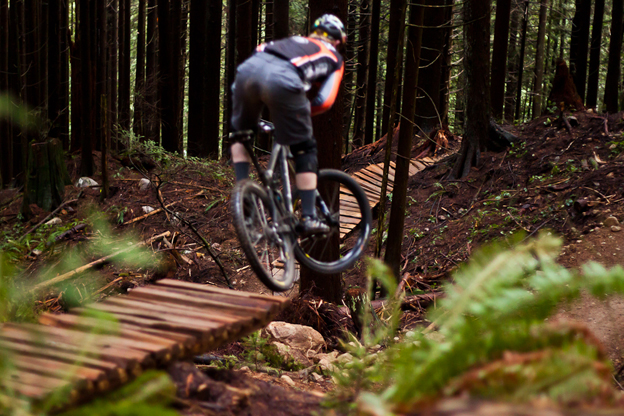 Jesse picked up a snazzy new frame from the Brodie clearance section, and I wasn’t about to miss its first outing. We were treated to a beautiful fall day for the test and tune. 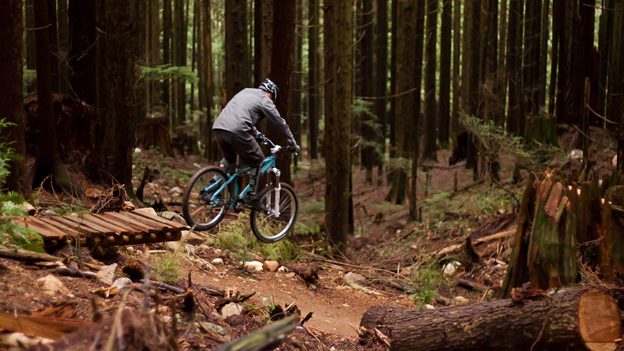 The full suspension envy eventually got to Jodi. She’d done a few rides on the Wildcard and we knew it was time to look for the right bike. We took Andrew’s Ethos, “just for the weekend.” With 5″ of travel out back and the fork upgraded to a 120-160 Marz 55, this is just about the perfect all day Shore bike. 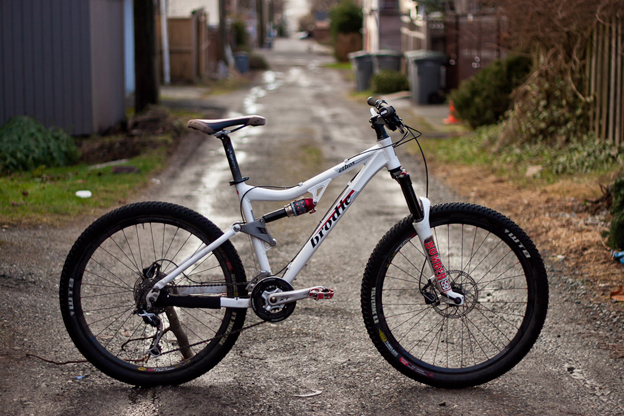 And just as the Wildcard had given me the confidence to go bigger, the Ethos did for Jodi. With a warmup lap on Bobsled and a return to our favourite, Ladies Only, it became obvious that both of the Shore hardtails we’d spent the year on were going to be relegated to loaner bikes. With the Ethos weighing in quite close to her hardtail – if not lighter – any thought that my Wildcard was a good pedaler went right out the window. Putting Jodi on a faster bike pushed her confidence and attitude on the climbs. 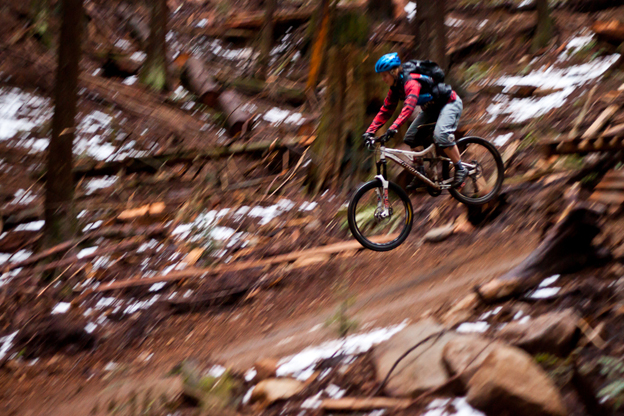 Even confident riders have their barriers, and for Jodi that was getting the tires off the ground – not any more!

It’s always nice to pass the camera on to an able set of hands, and Jesse and Jodi caught me having a blast on their respective new bike shakedown rides. 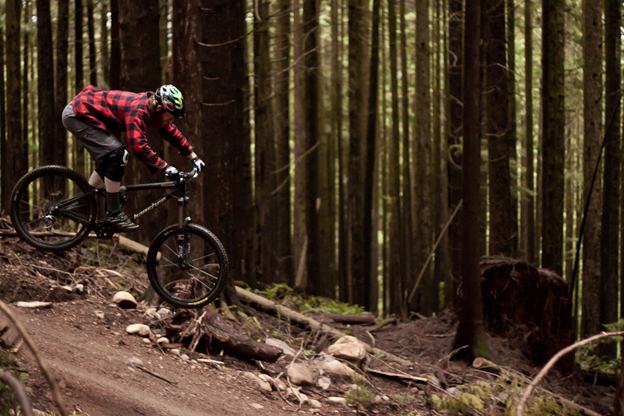 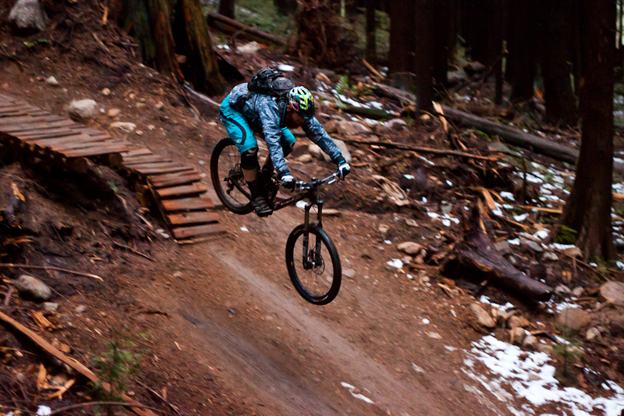 Soiling a fresh pair of shorts the day after the Raceface sample sale. Photo ~ Jodi Rolston

All the while I worked on updating the Wildcard from Ryan’s shuttle-oriented build. Shore-proven Maxxis Minions with new light weight EXO sidewalls, a low-rise bar, a 400mm seat post, and a WTB Devo saddle rounded out the initial changes, and brought the weight down a few pounds. 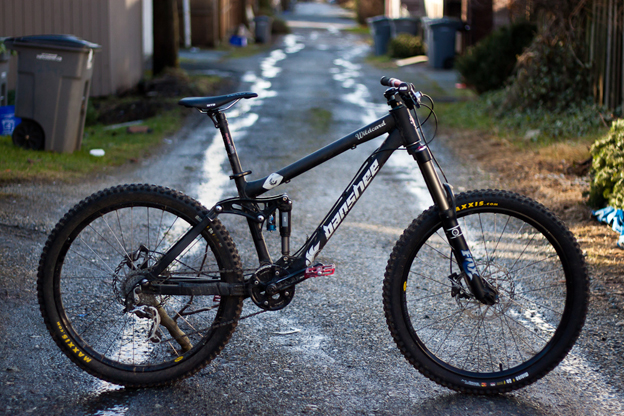 The Wildcard had reached its initial plateau of modification: tires, pedals, bar, saddle.

With the Wildcard having replaced the Chameleon in all the ways it used to excel, I neglected the hardtail for a while. It’s difficult to justify owning a bike that isn’t getting ridden, even though it is an awesome loaner bike. It’s also difficult to justify owning a freshly-serviced travel adjust fork and not ride it. Approaching the anniversary of the Catalyst, I wondered about the Chameleon’s place in my stable. I hadn’t really ridden it in over two months. Repurposed as a city bike, I did feel at home again on the little aluminum ripper – but something just didn’t feel right about that. 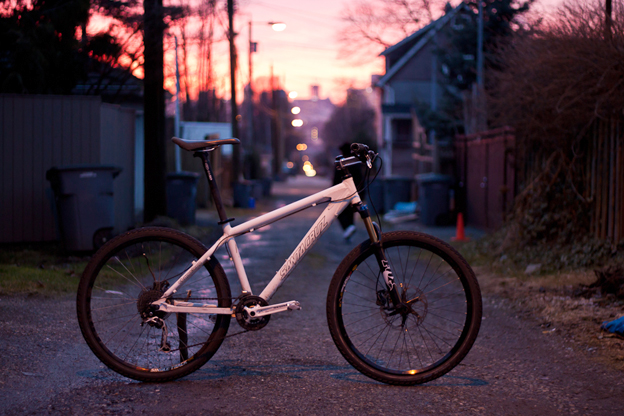 The Chameleon was being scrutinized. What point was there in a stiff aluminum hardtail when the Wildcard did almost everything better?

The Catalyst was retired from freeride, but now the bike that replaced it wasn’t being ridden. If I had a full-suspension bike capable of all the Fromme riding I was still enjoying so much, then maybe trying the steel XC hardtail again wouldn’t be such a bad idea. Its 23.8″ top tube, 40 mm longer than that of the Chameleon, was much more suited to me for XC use. 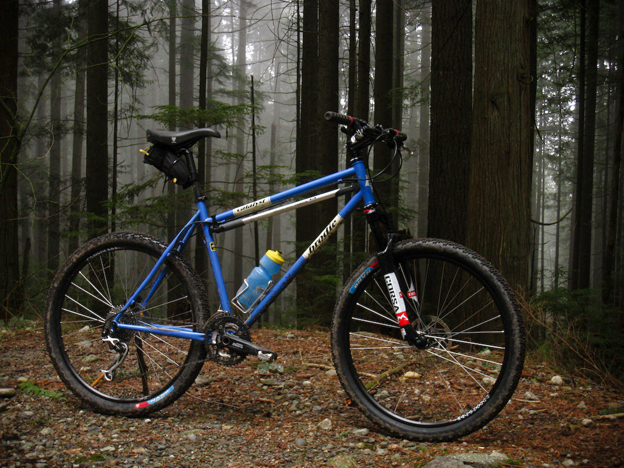 Reminiscing about the Catalyst’s first day on Fromme, I knew I’d come a long way.

While the steel Catalyst had provided a good learning platform and one that I was happy to modify, my riding had evolved beyond the bike’s intended purpose. With the Wildcard in the stable, the Catalyst could now potentially fill a different niche. Coming full circle, I decided to swap all my parts back to the steel frame. A year minus three days before that fateful ride on Mt. Fromme, I took the fully customized steel hardtail back to the mountain it spent the most time on. 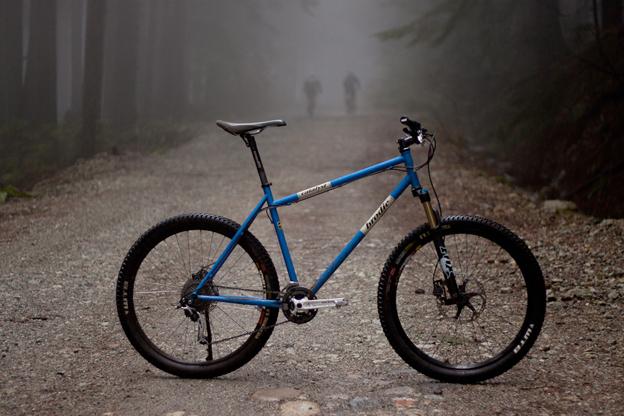 A steep bike keeps you honest. It’s easy to gloss over such a simple cliche, but I take it to mean this: if you can do it on a 4″ hardtail with a steep head angle, you can do it on anything. In the name of fun, take a short travel hardtail to Fromme’s lower trails or Burnaby Mountain – smiles for miles! The trails I’d had so much fun on a year earlier were still totally awesome on the souped-up Catalyst, and I had gained the skills to ride them with the seat all the way up. 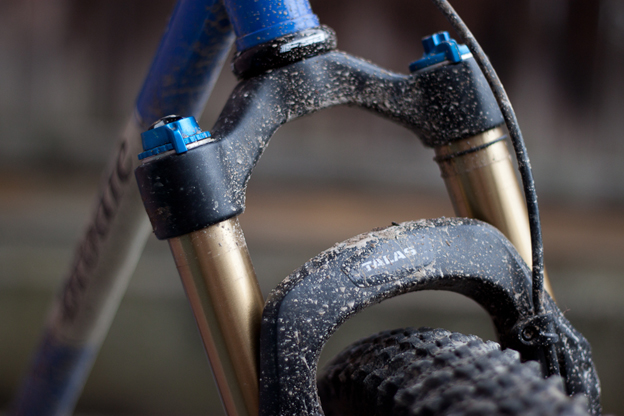 Fresh Burnaby Mountain dirt. The classic steel look was definitely a selling point in the first place, and it was nice to see the frame built up again.

After revitalizing the steel hardtail and deciding I’d like to ride it again, it was time to check that the damage I’d caused last year wasn’t terminal. I took my dremel to the head tube welds that had shown signs of stress, polishing the head tube welds to bare metal to inspect. As it turned out, the welds and the tubes looked perfect. The damage was indeed cosmetic, and since my freeride needs were now met by the full suspension Banshee, I could ride the steel Brodie without feeling like I was abusing it.  I clear-coated the raw steel, as a testament to where I’ve come with the bike. 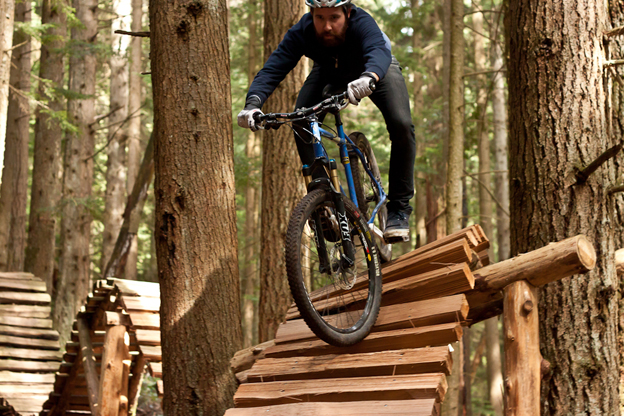 Of course, the Catalyst still makes an excellent loaner bike for the taller rider.

I didn’t count the number of times I got out on the trails in my first year of riding, but there’s no doubt it was in the triple digits. I spent quality time on four frames in so many amazing locations, with a foundation in the mountains I’d known my whole life. My lifestyle, while already healthy and happy, has changed for the better. Spending my free time in the forests of the North Shore, with its endless technical challenges, I’ve come home. 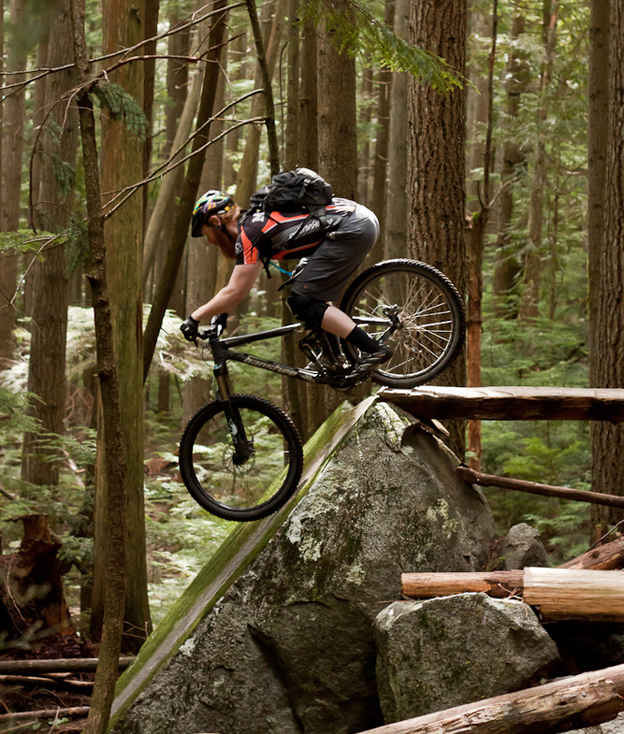 Taking the plunge on a Fromme classic. Photo ~ Matt Barber

With a year of trail riding behind me, there are countless stories that haven’t even surfaced in this already-long article. You could say I was making up for lost time in the forests of my home town, and who would fault me for it? The North Shore’s trail network is a place I am happy to call home, to bring my friends, and to have a voice in a community I’m proud to be a part of. The trails go on… are you coming for the ride? 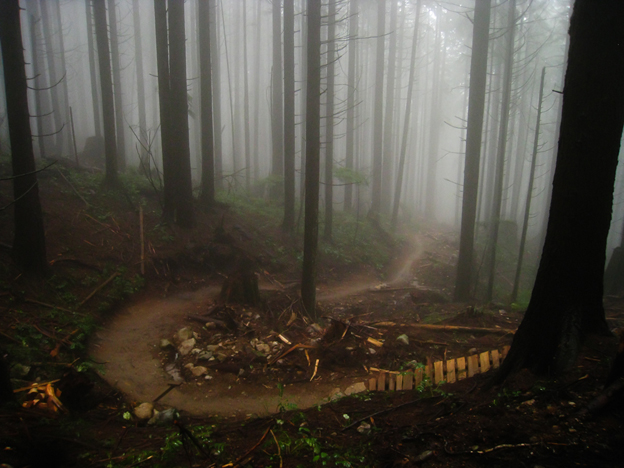 I’m sad to see this series of artices come to an end. But after riding with Morgan today I have a feeling we’ll be able to wrestle more articles out of him. Anything to say to Morgan or the other Handsome Gentlemen? Over here…