I recently received a set of the new 2011 Avid Code brakes to test. Off the top let’s be honest; the old Code was a bit of a dog, evident after a quick scan of some past reviews. The good news is that for 2011 the Code gets a complete overhaul, and it looks as though Avid has done a bang up job. All the bits we liked from the old Code remain with a sealed bearing main lever pivot, adjustable everything, and 4 pistons in the caliper. To spice things up the TaperBore technology and top loading pads from the Elixir were added. To boot the new Code is lighter than old one, and I think far better looking too.

The test steed, a Trek Session 88, complete with the new 2011 Avid Code brakes.

Installation of the Codes was very easy. I really like the 2-bolt Ambidextrous levers and clamps. This feature is especially handy if you’re from the Southern Hemisphere (and thus backwards) as you can install the brakes without having to switch the lines and re-bleed them. Also the levers are MatchMaker compatible if you like a cleaner bar set up. I’m not a huge fan of the gimmicky Tri-Align spherical washers on the calipers, but regardless the calipers were relatively easy to get bolted up. Out of the box the brakes worked surprisingly well. I’ve grown accustomed to Avid’s near mandatory bleed before use requirement. However I can report thta while the factory bleed may not be perfect, it is more than adequate. I’ve had the brakes on the bike for a few months now, and even though the rear is a touch spongy, I still haven’t felt the need to bleed them. The new Codes are compatible with Avid’s syringe bleed system, which in my experience is very easy to use. All in all the 2011 Avid Codes are very easy to install and maintain. 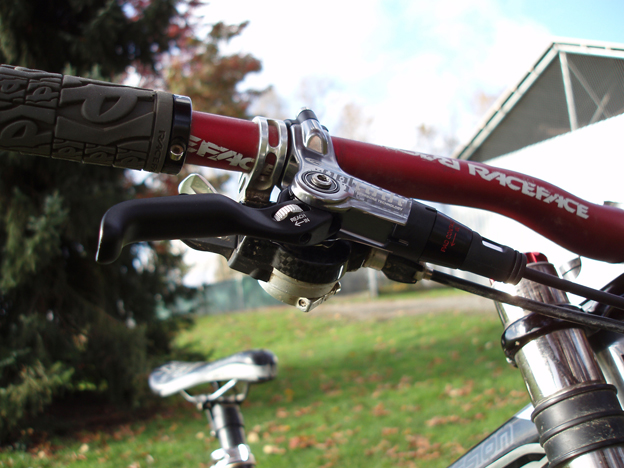 On the trail the 2011 Avid Codes are an absolute pleasure to use. The lever geometry is spot on and the lever blades feel very comfortable in the nook of my index fingers. The brakes dish out ample power in all conditions, and showed no signs of brake fade even hard sustained use. In a back to back test on the same day against the Codes biggest rival, the Shimano Saint, I have to give the performance advantage to the 2011 Avid Code. I thought the Code offered as much sheer power as the Saint, but the Code felt more predictable, somehow easier to use. I did notice that when the Codes got really hot the contact point did ever so slightly move away from the bar. Not enough to affect brake performance, but something to report none the less. As a whole I was very impressed with the stopping performance of the new 2011 Code in every condition I rode them. 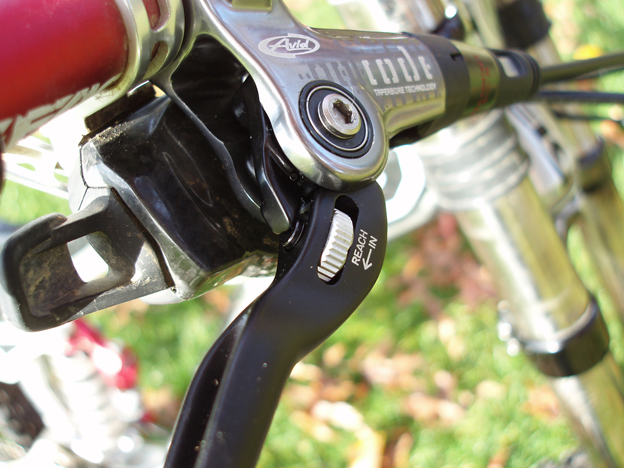 The updated Code reach adjuster. I like this system with the sealed axle bearing far better to the one used on the Elixir.

As far as durability is concerned the 2011 Avid Codes have been flawless. I’m not a huge fan of the stock organic pads, and expect brake performance to be substantially better with the metallic replacements. I’m happy to report that unlike another TaperBore brakes I’ve used the reservoir in the new Code is large enough to always supply the caliper with enough brake fluid, even when the pads are pretty much worn out. One feature I particularly like is the sealed bearings on the lever pivot. I’ve always disliked how brakes that use cheap bushings in the lever pivot would wear out and become sloppy over a relatively short period of time. Due to the sealed bearings the Code levers are as tight as the day I got them. I plan to keep these brakes on the DH bike for a while longer and will report back if I have any issues. 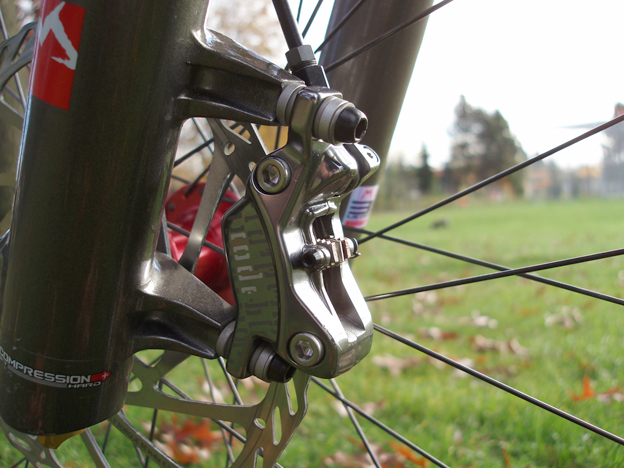 So the 2011 Avid Code is a great brake, but how does it stack up against the competition? The Code weighs in at 272 grams for a front brake without adapters and rotor. That makes it a full 20 grams lighter than the Saint, and 57 grams lighter than the Hayes Stroker Ace, but 71 grams heavier than the Formula ONE. Price wise the 2011 Avid Code retails for $305 CDN an end. The Shimano Saint and Formula ONE will set you back an additional $50 CDN an end, while the Hayes Stroker is about $30 CDN cheaper. While the 2011 Avid Code certainly isn’t a cheap piece of kit, I think it offers good value for money, and likely where I’d spend my money based on the brakes I’ve tried and tested. 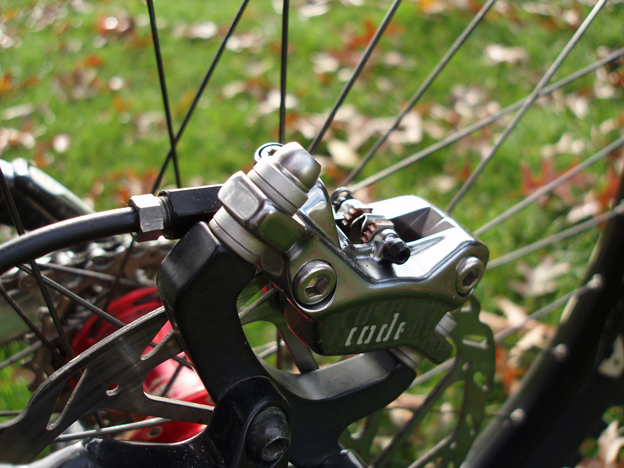 I really had to rack my brains to come up with any criticism for the new Avid Codes, but I do have two points to make. First off, as I mentioned earlier, I’m not a fan of the Tri-Align spherical washers, but then again I could always replace these with a spacer if I really wanted to. Secondly the lever contact point adjustment seems pointless to me. I always run the contact point as far out as possible and then set the pad contact point relative to the bar using the reach adjuster. This method minimizes the lever dead-stroke to the pad contact point. I can’t fathom a reason why you’d want more dead-stroke. Doesn’t everyone do the same thing? Personally I hope Avid makes a cheaper model that is exactly the same as the 2011 Avid Code but without the vulnerable contact point adjustment. Certainly that’d be the model I’d buy. 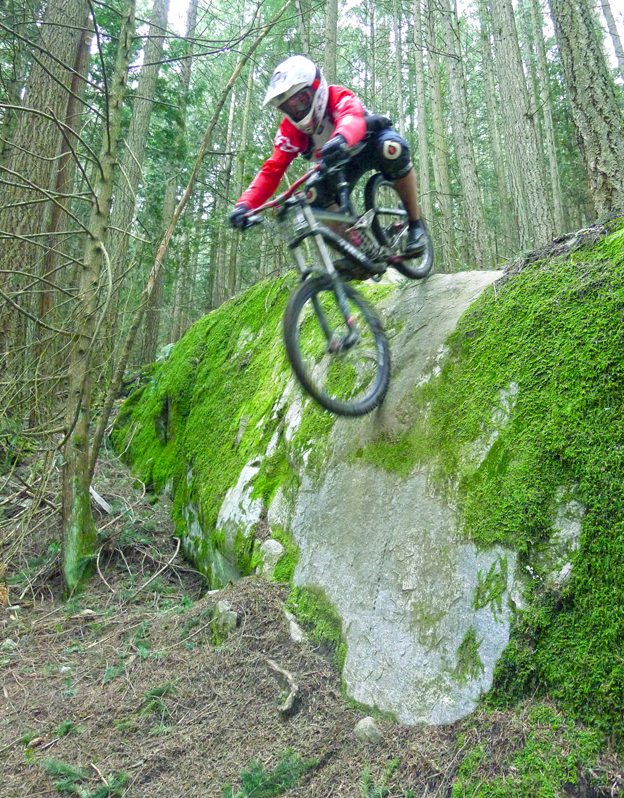 In a nut shell the 2011 Avid Code brakes are excellent. Based on the time I’ve spent on the new Codes I give them two enthusiastic thumbs up. I think the new Codes are excellent performers, fairly light, look fantastic, reasonably priced and seem to be reliable. There may be lighter, and cheaper brakes available, but for the rigors of downhill riding and racing the 2011 Avid Code is my pick of the bunch. 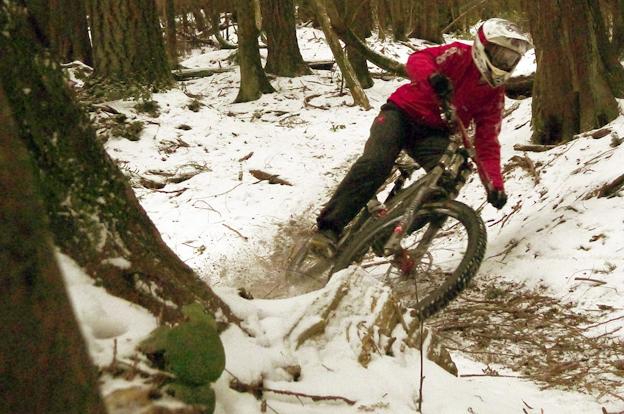 The new Codes were predictable to use, and inspired confidence. Photo by Martin Newman.

Have you ridden 2011 Codes? Like? What is the most important feature in a DH brake in your opinion? Weight? Power, Modulation? Adjustability? Lay it out here…

I had 2011 Aivid codes on my previous DH bike, a Canyon Torque FRX 9.0. Before that I used a prior version (black body) of codes. I currently have Magura MT7's on my Radon Swoop and Shimano SLX on my enduro bike.

I want my Code's back! I felt the biting point was perfect and never had an issue with stopping. Modulation was brilliant and the levers felt like they were the right shape for racing. You could have controlled braking when you were in awkward body positions to save yourself from falling off.

I fell the Maguras are overpowered and very finely tuned whereas the Shimano brakes are very good I am not sure I like them as much as the Avid codes.

I will look out for the new SRAM codes!