I love traveling light and I hate having too many possessions.

Call me a hippy, but I just don’t get excited by owning things. With the exception of a few clothes, a good bike and a few digital tools, I own very little. I get anxious if I have more possessions than can be swiftly stashed into a single bag. I always have to feel like I can throw everything in a bag and be out of the door in minutes if need be. I don’t know what childish insecurity makes me feel this way. Perhaps something traumatic happened to me in my distant past or perhaps I know one day I’m going to have to run somewhere fast…

Seb getting sideways at Silver Star in 2010.  Photo ~ Jerry Willows

I have been on the road constantly for four and a half years now, but oddly enough I hate traveling. It’s not seeing the world and experiencing things that I hate, it’s the three or four days leading up to the act of traveling. There’s the endless mental checklist of last minutes things to do, people to say farewell to, hoping that you will see them sooner rather than later, and the growing feeling of impeding doom that creeps upon you when you realize airline check-in staff have the ability to make or break your trip. Once I’m in the airport departure lounge and checked in then I get into a zen state of travel where I accept the fate of sitting for many many hours in one seat staring at a bad book or bad film, but before that, I am quietly anxious. Anyone who has spent time with me in the days leading up to a big trip may of noticed a subtle change where they may of caught me staring off into the distance, or walking off mid sentence to the check that that I have packed spare rim tape somewhere in my baggage. 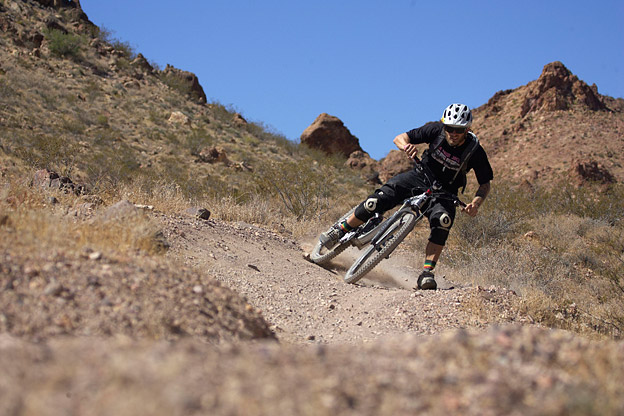 Well, in the three or four days before departing North America for the winter of travels elsewhere I realized that I had a few too many bicycles to pack up and take with me. Somehow over the past little while I have managed to accumulate a few extra bikes, not because I like having many bikes, but that there’s so many different riding styles to enjoy and each one requires a different bicycle. Having a few extra bikes is great if you have a house and a place to store bikes. For me it’s a blessing and a curse. I’m blessed with having more than one bicycle to choose from and I curse the idea of leaving bicycles to sit in storage; unridden. I hate myself for having more bikes than I can feasibly use at any one time, and I hate having bikes go to waste. One day I will own my own garage with a workshop and beer fridge, a place I can do man things alone or in the company of others, but until then I don’t have the room to leave bikes go to waste. Having a bunch of bikes you rarely or never ride is a waste. It kills the bikes soul to leave it collecting dust on a wall hook. I’d rather see bikes get used and, preferably, abused. Which is why I decided to give my bikes away this winter. Temporarily of course.

I chose three friends that in some way, deserved or needed these particular bikes in their life.

The mighty Santa Cruz Tallboy (the bike that defies categorization) was left behind simply because the drivetrain has gone around the globe and I can’t afford to upgrade it just yet. The Tallboy is the greatest bike I’ve ever owned simply because I have never had a bad ride on it and it never fails to make me smile when I ride. It’s simple and easy to get along with, always up for a laugh, and makes me feel like a rockstar going up and down hills. My good buddy Todd Hellinga had been looking at me weirdly every time he saw me on a 29er, so I decided it was his turn to be the one to be laughed at. 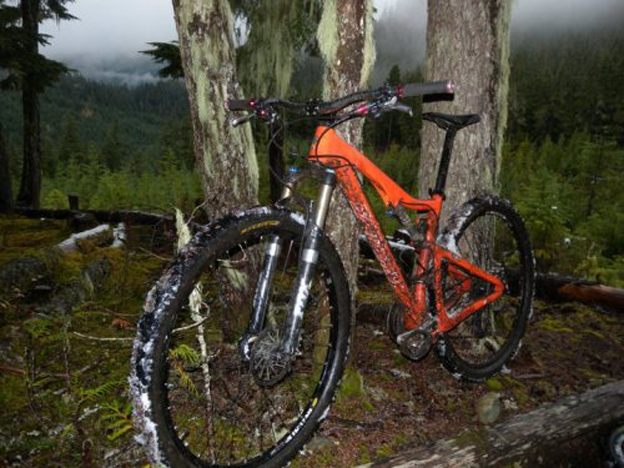 The Tallboy getting some trail time under Dan Gronross in Squamish since there was too much snow in Whistler (and because Todd can only focus on one sport at a time)..

Subject: Dear Seb, you are a dumbf*ck…

Sometime in October I had a message on my phone from Sebbo, he was on his way out of town and the Tallboy was at Em’s for me to pick up. He may try and play it off like he was doing me a favor, but I know he needed somewhere to stash it for the winter while he globe trotted, the nomad he is. Not to mention the worn brake pads, the rattly front hub, tires worn to nothing (too much skidding), a front fork that I think may have been borderline useless, and a rear shock with a noticeable dead spot at the beginning of the stroke. No wonder he left it with me, it’s clapped the hell out, you bastard! But I rode it anyway, cause well, it was the legendary Tallboy and I was curious. Curious if all the lore was true. It is.

The cold, wet, and dark of fall on the wet coast was in in full effect, the riding has been slippery and amazing. I found myself plying the technical goodness of the westside trails. Dark old growth draped in a thick carpet of deep green moss, roots glistening in falling rain, dark ribbons of loam snaking through this over-saturated forest. More than I few times I passed over my freshly tuned and shiny Cove Hustler for the beat down Tallboy. What can I say? It’s really that good. Most 29ers aren’t very playful, and they feel cumbersome and gross. The tallboy isn’t like that, it almost felt like riding a real playful 26er, loves to be jumped and flicked around, although it definitely was still a bit long for the real tight old school stuff. And it just ate up the tech, and spat it out, and asked for more. And with some fresh rubber on the wheels I think it would’ve been even better.

I wanted to give the 29er thing a fair shake for a bit and see if I couldn’t do something about all my pre-conceived notions. I have been very weary of riding with Seb when he is on the Tallboy as I didn’t want to be associated with 29er riders. After riding the Tallboy I have had to reevaluate my stance on 29ers a little. I wouldn’t say I’m a full on convert, but I’m certainly not a hater either, though it is fun to deride the apologists. It is though something that other 29ers aren’t; really fun. It’s not a 29er thing, it’s a Tallboy thing. I’m not rushing out to buy a 29er, but if, and when, I ever do…pretty sure it’ll be a Tallboy.

This year I needed a new bike for riding bike the ruggedly manicured heaven and hell of the Whistler Bike Park. After reading Connor Macleod’s review of the Driver 8 on NSMB way-back-when, I was interested to have a go on one. I stopped by Santa Cruz on my way out of Jamaica in June to pick up a hot little number by the name of Emily, but I ended up picking up a raging red lipstick Driver 8 at the same time. Sometime later I managed to get my grubby paws on a Carboner V-10 frame for testing purposes so the Driver had to be made into a donor bike for the Ten Inch Plastic Dildo after just a month. I’m looking forward to getting back to soaring the Driver, but for now I figured it was the turn of Dan Gronross as his own big bike is so badly beaten after years of abuse and neglect. 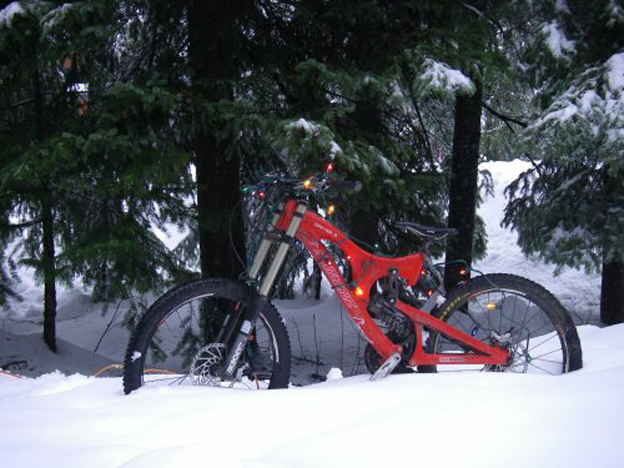 Seb made me drive all the way to Bellingham,WA – which is in another country – to pick this bike up. Upon arriving to a smiling Seb Kemp, his only warning about the bike was that it was just recently built back up and with haste, so I should probably have a quick look over it to make sure that all the parts were connected. Sitting in the garage nestled amongst the Bike Magazines’s Bible hopefuls, stood the flashy red Santa Cruz Driver 8 he has asked me to “watch” over while he spent the Canadian winter season traveling  the globe.

Seb and I live 2 very different lives. He roams about like a transient bike-traveling vagrant, allowing the trail to take him where it pleases. I, on the other hand, am a desk jockey back here in Vancouver who only once and a while gets the pleasure to throw a leg over a bike [Seb: not true, he rides more than most and the mileage on his faggy little ute is proof]. However, our paths in life meet at the passion we both share for epic rides and saturday night sessions.

Upon taking possession of the Driver 8, I had promised that I would be sure to take her out for a ride at least once a week, and document each endeavor. Sadly, I have failed in that quest so far. Of late the phone has yet to be silent and the inbox continually overflows, all the while the Driver 8 sits idle.

So I offer this photo of the bike, dirty, buried in snow from the one solo ride that it has been on since taking residence at my home. Going forward I will put better effort in to get out for that ride.

Thanks Seb, when you get back here to Canada we will throw down some laps of the bike park. But perhaps you will be too busy throwing up because you can’t handle your booze anymore.

The third bike I handed off, like a hot potato, as I blazed out of the impeding winter was my Black Market MOB. I love left hand hips, long rhythm sections and dipping Greg Hill’s, but I don’t get enough chance to do these things during the hectic summers and I am tired of carrying a jump bike around the world with me as well as my first bike. I was fortunate enough to get a twenty minute session in at the newly finished Vanier Park in October before the rain came. Vanier is a gold mine for the city and I can’t wait to go back next spring, but until then I know of one guy who could do with learning some finesse aboard my chromed murder machine. Adam Mantle is a yo-yo for the city and seems to head back there each winter to keep riding whilst the rest of the Whistler riding community go la-la for the devils dandruff. I figured Adam would benefit greatly from having a jump bike at his disposal, but it seems on his first ride he went lawn darting with his head and I haven’t heard from him in a while…If anyone sees Adam or my beautiful chromed (last of the S&M made) MOB then please check that they are both in good health. 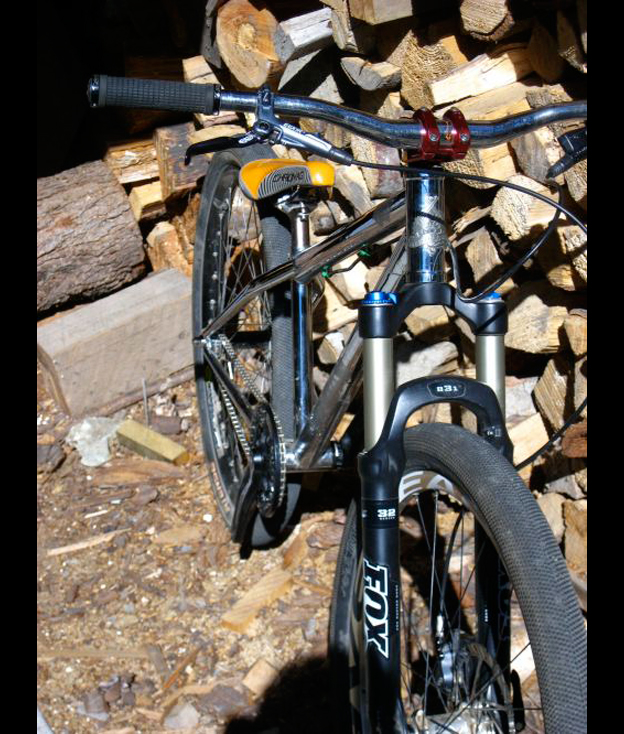 For a look-see at the one bike I didn’t give away this winter then CLICK HERE.