Mountain bikers are a greedy bunch.  We want the best of everything.  The latest technology, the lowest weight, exceptional durability, tons of adjustability, etc.  Fox has a long standing tradition of satisfying even the most discriminating mountain biker’s desire for excellent suspension.  However, progress in the sport is ever present and over the last couple of years Fox found itself with a gap in the lineup.  Their well-loved 36 series provided travel up to 160mm and their world-cup proven 40 offered up 203mm for folks in the 8 inch travel market.  But being the greedy bunch we are, riders wanted more: a longer travel fork with the stiffness and durability of the 40 without the extra weight and trail limitations of a dual crown design.  Enter the Fox 36 180mm series. 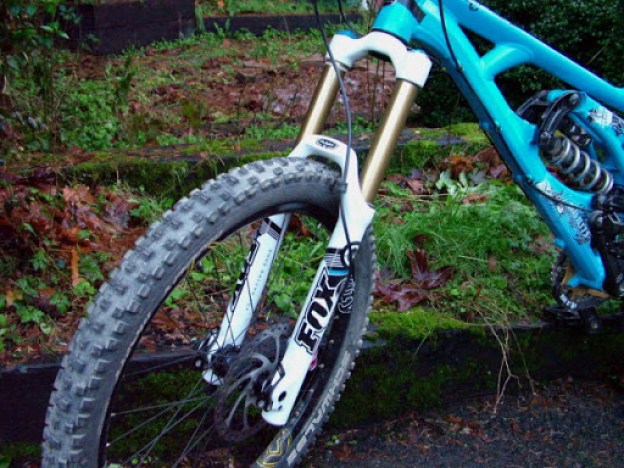 A sight pretty enough to make even the most jaded bike junkie’s heart skip a beat.  The Kashima Coat stanchions give the fork a unique look but they aren’t just window dressing – they work.

Fox did what smart companies do; they saw an emerging market and designed a product to fill a need that wasn’t being served.  The 36 180mm series comes in all the normal variants you are already familiar with from Fox; TALAS (air spring with adjustable travel), VAN (coil spring) and FLOAT (air spring).  They all feature Fox’s excellent tool-free 20mm thru-axle design and the option of standard 1 1/8th” or tapered steerer tubes.  I found myself squarely in need for just such a  fork when I was assembling my Marin Quake project freeride bike, and the 36 180mm Float looked to be a perfect choice.  The fork arrived soon after the first production run in mid-summer 2010.  It was weighed, photographed, cut down and on the bike in under a day… and then the fun began in earnest. 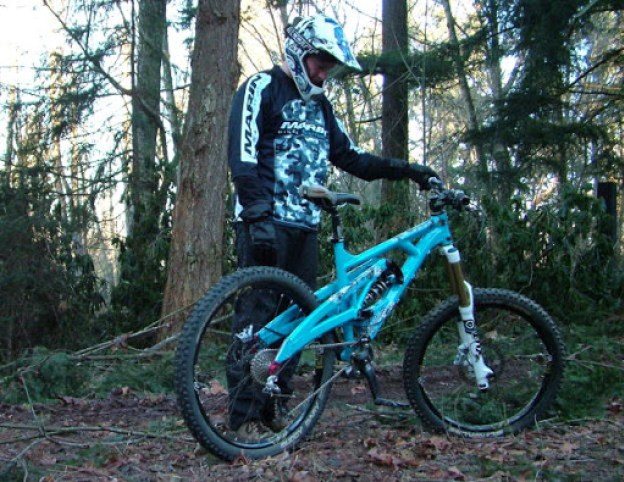 This thing is so pretty it will make you stop and stare too.  Even when it is -6C out this fork still gives you that warm fuzzy feeling inside.  |  photo: Beck Snyder

This fork makes an impression right out of the box.  It a visually impressive piece with a slick set of graphics that just make you want to look at it.  After lifting up the FLOAT version  for the first time I was amazed by how insanely light it was.  For such a solid-looking part it feels like a feather.  With an uncut, tapered steerer tube this copy tipped the scale at 5.36 pounds. That’s over 3 pounds lighter than the 180mm dual crown, coil spring fork I was running on the Marin.  It is a pretty rare occurrence to be able to knock 3 pounds off any bike and actually increase its capability, but that is exactly what happened.

The big news for Fox in 2011 that immediately catches your eye is the the gold Kashima Coat covered stanchions.  Kashima Coat is an industrial coating process that does two things that are both highly beneficial for suspension parts.  This first is that is that it fills in many of the tiny gaps and ridges on the surface of the stanchions and makes them incredibly smooth. This not only helps make the fork slick for better small bump compliance but also helps keep your fork seals fresher, longer. The other less obvious result is that the process actually increases the hardness of the stanchions, which again provides dual bonuses.  First, the stanchions are more resistant to scratches; and second, the fatigue life of these high-wear areas is extended by a considerable margin.  All of these facts add up to a fork that will work better, for longer… which is sweet music to a greedy mountain biker’s ears. 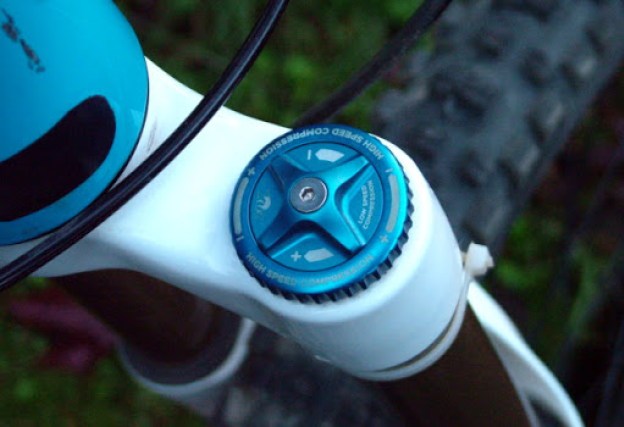 The relocated compression controls are easy to reach and work like a Swiss watch.  You can honestly feel the fork perform differently in just one or two clicks in either direction.

Another change in the 2011 line is the inclusion of the Fox’s FIT RC2 damper.  I have always found the damping on Fox forks to be in the “good-to-great” range, but this year’s damper is even lighter leading to more responsiveness and a better ride, says Fox.  A more noticeable change is that the damper in inverted in the fork, meaning the compression controls are on the top rather than on the bottom of the leg. This falls under the category of “damn handy” and means you are much more apt to fiddle with your fork settings than you were with the old design.  I really noticed this difference when I went back to riding my old 36 with the controls on the bottom.  Chalk up another solid improvement for Fox in the usability category.

Once I got the fork on the bike setup was a breeze.  If you have played with Fox forks in the past three or four years it is all the same.  In the case of the FLOAT, dial in a starting air pressure using sag measurements, adjust the rebound to your liking, get the low speed compression pretty close on your driveway then set the high speed for the kind of trail you are headed to. Once there, adjust the compression settings based on how the fork responds and just stiffen it all up slightly as it breaks in.  Once you have done it a few times it is amazing how quickly you can get all the settings dialed in to your personal preference.

My main goal in testing the fork was to coax out it’s personality.  Was it simply a longer 36, or would it perform like a mini-40?  On local trails the bike was clearly more nimble due to the serious front end weight reduction and the single crown design.  It turned crisply and the suspension action over the smaller stuff was vintage Fox.  The action felt a bit coarse when pushing down on it in the garage at first.  On the trail however, it got smoother more quickly than any Fox fork I have ever used.  I am not sure how to explain this, but the results speak for themselves.  Break-in was almost nonexistent and small bump compliance was eye opening.  I still didn’t have a lock on the real soul of this beast, but the big picture got a whole lot clearer when I hit Whistler. 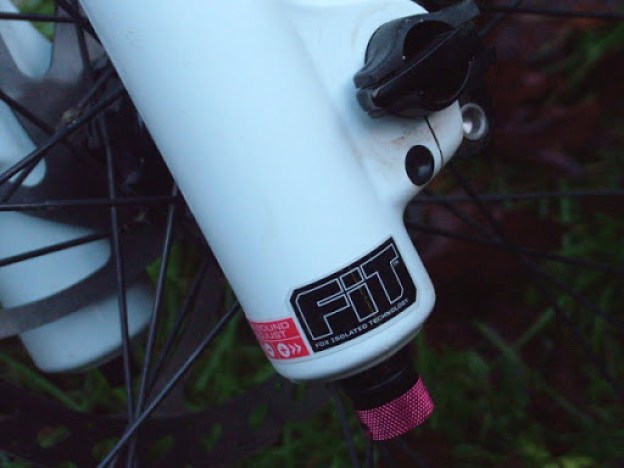 The rebound adjustment knob is tucked away under a substantial cap to protect it from impact and the tool-free 20mm quick release is the best in the business by my estimation.  No fuss, no muss.

This fork was raring to go right out of the Whistler parking lot.  I stiffened up the high speed compression settings for the larger impacts and took off about two clicks of rebound.  The front end felt familiar right away.  It closely resembles the Fox 40’s I have ridden there before, but it was a bit quicker and easier to turn.  After a couple of warm up laps on the lower slopes it was time to hit Garbanzo and pin the needle to see if the fork flinched before I hit my limit.

Fork testing at Whistler is great.  There is so much variety and vertical that you get a boatload of data in a hurry.  Plus, you’re in Whistler.  For my Garbanzo runs I wanted a little bit of everything and I wanted to run top to bottom at speed to see how the new FIT damping held up.  We pounded runs down Duffman, No Duff, In Deep, Goat’s Gully, Fatcrobat, Hornet, Freight Train, Too Tight and most of the other runs lower on the hill before I called the contest.  The fork took it’s beating in style, and in the 38 degree heat I was a puddle of goo.

As I was two-handing my frosty beverage (for safety’s sake) at the bottom of the hill, I realized that my arms, despite being really tried from all the runs, were not the usual mess they are after a full July day in the bike park.  Forearm pump was a non-issue.  In short, the fork had done exactly what it was supposed to.  It sucked up every bad line, smoothed out even the most amateur landings, insulated me from the braking bumps almost all day and held its course through some of the roughest and steepest trails Whistler could toss at it. 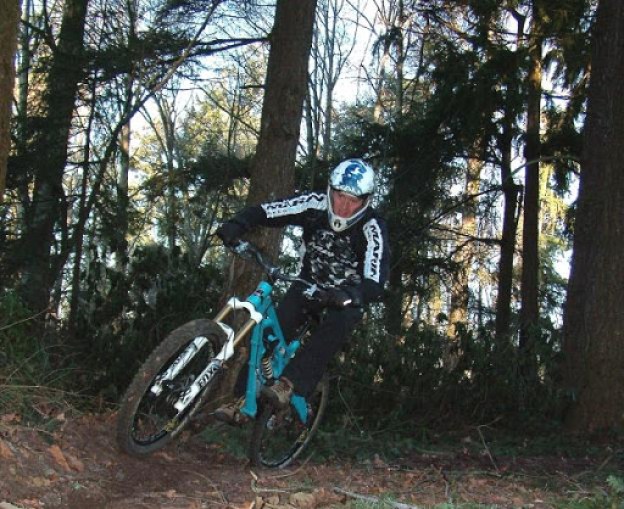 Fox wanted this thing to handle like a sports car so they kept the axle to crown height seriously low.  One way they managed to pull it off was by lowering the bottom of the sliders well below the front axle.  They hit the nail on the head… this thing turns on a dime and gives change.  |  photo: Beck Snyder

One of the most impressive aspects was how little front-to-back movement there was in the fork, even through nasty sharp-edged hits.  Fox designed the fork to have a large bushing overlap surface to keep it nice and stiff despite its longer legs.  Beacuse of this the fork that tracks amazingly well and inspires confidence.  So while it looks like a leggy 36, it runs like 40 when the chips are on the line.

At some point during the testing the thought occurred to me that this is probably the single nicest cycling component I have ever had.  Given the voluminous amount of two-wheeled paraphernalia that has rotated through my possession at one time or another, that is a fairly stunning statement.  But it is true.  This a finely tuned piece of suspension engineering that delivers the goods in its chosen discipline as well or better than any others I have tried.  Period.

So what is not to like?  It can’t be perfect can it?  Other than having to foot the rather sizable bill to procure one, I am at a loss to name a weakness.  So far the report card reads: no leaks, no creaks, no problems.  Even the little details like cable guides and adjustment knob covers are all top notch.

So if you have an itch for a fork that is in the 7 inch range and feel the need to scratch that itch in style, save your pennies and do it right.  This one should perform well for the long haul, and look good doing it.  Tough for even greedy bikers to argue with that.

Moving in to the 7 inch market?  Up-gunning your 6 inch steed?  Just want to hang one on your wall because it is so pretty?  Send your cat calls to the boards right this way…