You may not have heard about the golf course proposal up on Cypress. A full 27-hole  course running from the 4th switchback all the way west to the power lines, including where the trails Pre-Reaper and Blind Skier currently lie. 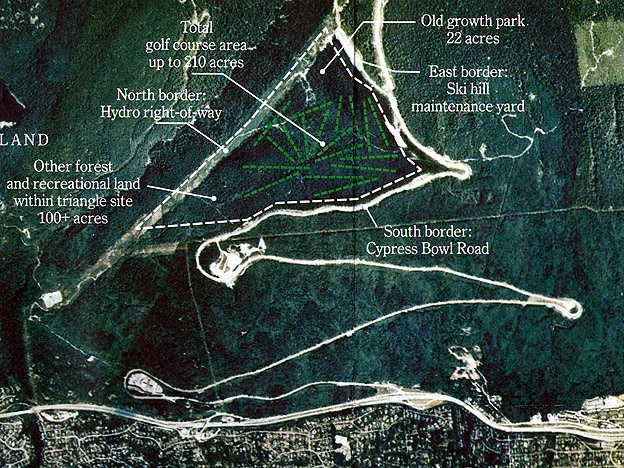 The golf course would take up all the land above the highway from the 3rd to 4th switchback.

Normally trail closures are a big concern, but you don’t have to worry about these. That’s because mountain bikers aren’t the only people who prefer Cypress covered with forests instead of fairways. This battle has already been fought and won.

It was 1990 when the golf course was proposed by Cypress Ridge Golf Company. It was strongly endorsed and promoted by the West Vancouver Mayor. The golf course looked like a done deal. Much of the area had been logged 50 years earlier and there wasn’t much interest in preserving it.
That all changed when a group of conservationists became aware of  a stand of old growth trees in the western section. It was a significant stand, 360 years old with individual trees between 650 and 900 years old. 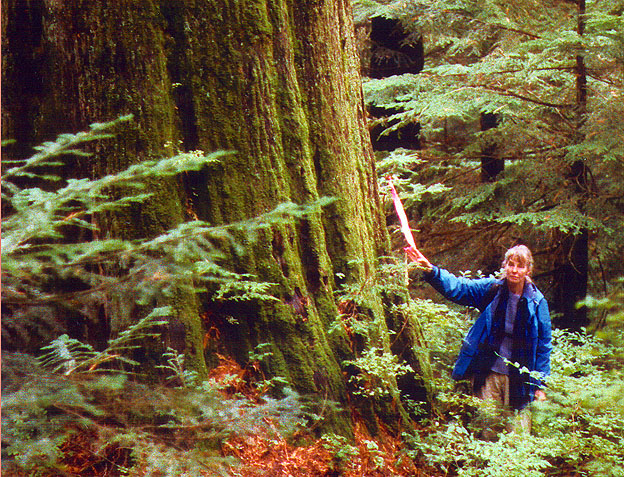 Katharine Steig stands beside one of the old growth trees flagged for falling.

Friends of Cypress Ridge was formed to protect the old growth. The group challenged the development in BC Supreme Court citing a restrictive covenant on the land reserving it for recreational use. They argued that a golf course was a commercial operation. The BC Supreme Court agreed.

After the defeat in the courts, the only way for the District to lift the covenant was through referendum. Thinking there wasn’t much public support for the forests, the District set November 17th, 1990 for a referendum with these questions.

ARE YOU IN FAVOUR OF A GOLF COURSE ON CYPRESS RIDGE? YES/NO

If a majority of the community vote ‘YES’ on the above question then:

DO YOU FAVOUR DEVELOPMENT ON CYPRESS RIDGE OF A 27-HOLE GOLF COURSE WITH A MINIMUM OF 50% PUBLIC PLAY AND RETENTION OF THE 22 ACRES OF OLD GROWTH FOREST? YES/NO

DO YOU FAVOUR DEVELOPMENT ON CYPRESS RIDGE OF AN 18-HOLE GOLF COURSE WITH APPROXIMATELY 30% PUBLIC PLAY AND RETENTION OF THE OLD GROWTH FOREST? YES/NO

The District sent a large, glossy brochure to all West Vancouver residents. This backfired and made more people aware of the old growth. The whole community got involved. High school students protested at the Lions Gate Bridge in support of the forests. 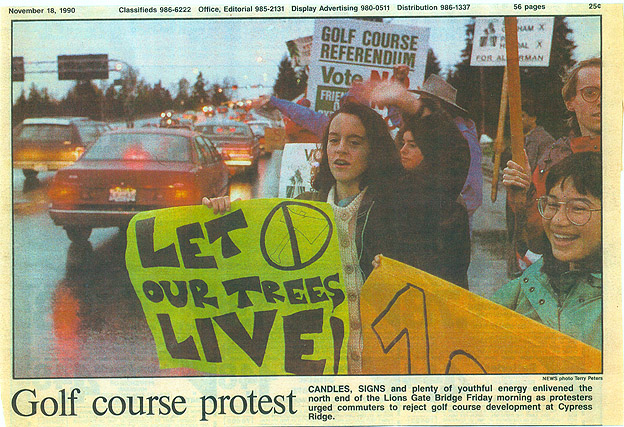 There was no escaping the referendum, especially during the morning commute.

Support for the old growth was far greater than the District expected. The golf course was solidly defeated 7,803 to 5,807.

This still left the future of the area uncertain, so in 1993, under a new mayor, a new referendum was held, this time to protect the old growth.

ARE YOU IN FAVOUR OF BYLAW No. 3840 , 1993 WHICH WOULD DEDICATE 133.6 ACRES OF FORESTED LANDS OWNED BY THE DISTRICT OF WEST VANCOUVER AS PARK FOR THE PURPOSE OF OLD GROWTH PROTECTION?

This passed with an overwhelming majority of 86.5%. If you’ve ever wondered why some people are so passionate about protecting the area, this is one of the reasons. 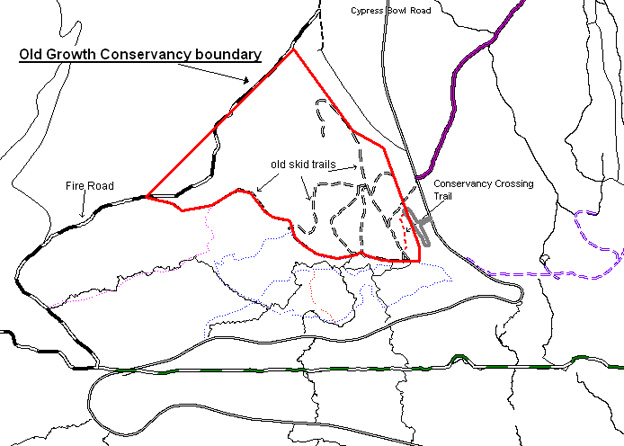 The boundaries of the Old Growth Conservancy were set in 1993, but not the name.

Little was done to manage the area until a 2006 proposal for a network of mountain bike trails south of the protected area. With renewed interest in the area, Council adopted the Strategy For Protection and named the area the Old Growth Conservancy.

In 2007 conservationists and mountain bikers worked together to form the Old Growth Conservancy Society to partner with the District in managing the Conservancy. The first order of business was to decide what to do with Pre-Reaper, which ran through the south-east corner of the Conservancy. Originally built by Dangerous Dan, Pre-Reaper had become badly braided and turned into a mud pit/swamp whenever it rained, which was often. 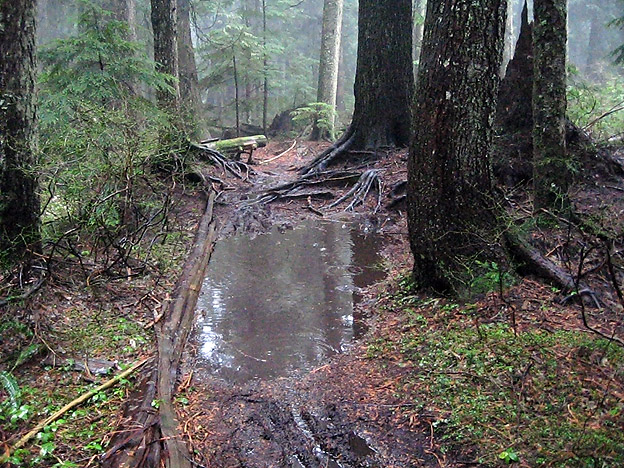 The trail was in poor condition, but it was in the best location. Rather than decommission the trail, in 2008 the OGCS chose to improve it to a mixed-use, sustainable trail. That year West Vancouver Parks started the improvements by building a bridge over an ephemeral stream and NSMBA volunteers built the approaches to the bridge.

With support from the NSMBA and West Vancouver Parks, the OGCS obtained a MEC Access Grant to complete the trail improvements. A dedicated group of NSMBA volunteers worked from 2009 to 2010, completing the work this fall. With no more mud pits and no more braids, the mixed-use trail has been a benefit to both riders and hikers. Due to its unique position of being the only trail through the Conservancy, the section of Pre-Reaper that runs through the Conservancy is now known as the Conservancy Crossing Trail. 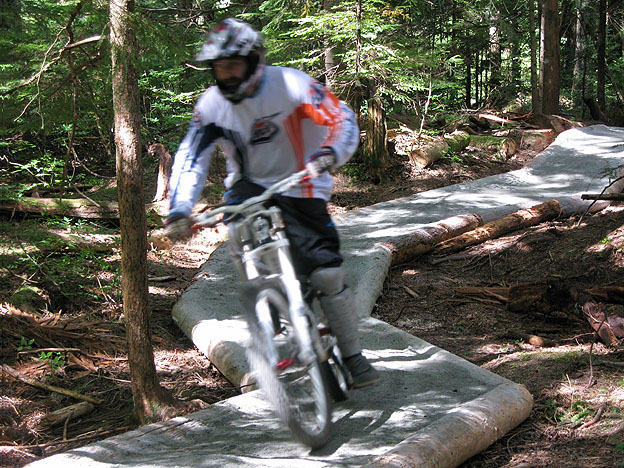 Riders enjoy the flow and exit the Conservancy much quicker now.

On Sunday November 20th the OGCS is hosting a celebration of the 20th Anniversary of the Golf Course Referendum at 1PM in Parking Lot #5. Everyone is invited to come and learn more about the history of the area and take a short walk along the Conservancy Crossing. Coffee and cake will be provided. Dress appropriately for the weather. It could be winter up there.

Ridden Pre-Reap lately?  Come celebrate the trees this Saturday.  And if you’ve got something to say roll it on over here…