Over the past year Manitou has been mounting a comeback in the performance suspension fork market with the release of the third generation Dorado MRD.  To hit a more moderate price point the folks at Manitou have come up with a new version, called the Dorado Pro. The Dorado Pro has the same internals as the Dorado MRD, except the carbon bits are replaced with aluminum. The result is a slight increase in weight, but a substantial reduction in price. I’d heard rave reviews about the latest generation of Dorados so I slapped one on the front of my downhill bike to find out what the fuss is all about.

The tester. Some washed up downhiller, who engineers stuff during the week, and thoroughly enjoys talking about bike kit. Photo ~ The Hoff

The first thing that caught my eye about the Manitou Dorado Pro is the slick carrying case. It sounds simple, but when a product shows up in a gun case I can’t help but feel giddy about giving it a go. Once you get the gun case home (and hopefully haven’t had to explain to a officer what’s on the back seat) you’ll be greeted by a pretty looking fork, a drop crown, a flat crown, brake adapters for both IS and post mount, an air pump, a set up guide, and the owner’s manual on a DVD. I give Manitou full marks on providing everything you’ll need to get the fork working on your bike. 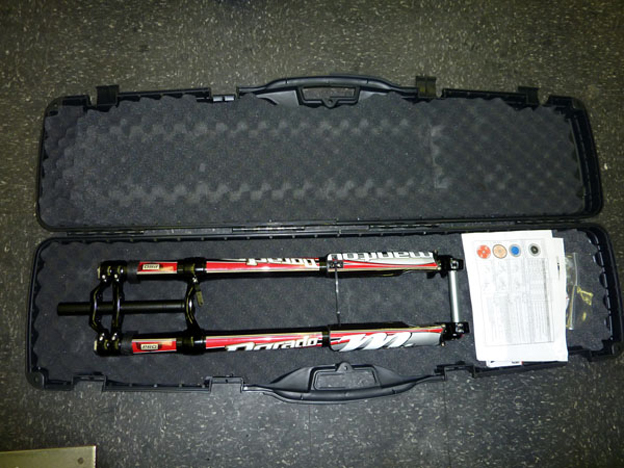 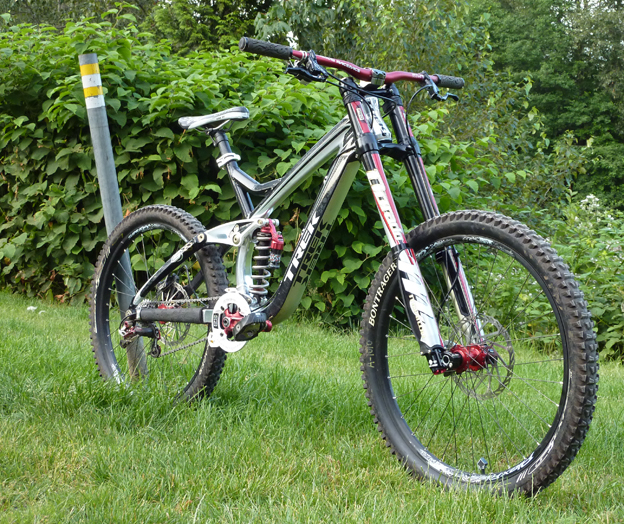 The test steed. A Trek Session 88 decorated with a Manitou Dorado Pro and a sprinkling of other top end parts. I really like the aesthetics of the Dorado Pro.

Out the box the fork worked flawlessly (read didn’t require a rebuild to work properly). As soon as I got the Dorado Pro on the trail I realised that the Dorado is to bumps as Takeru Kobayashi is to hot dogs. It’s so effective at adsorbing bumps both big and small that I think Manitou should rename the Dorado the OMONOMONOMONOM! The Dorado Pro air spring works well and feels closer to a coil spring than any other air fork I’ve ridden. However with all those air seals moving about the Dorado Pro did have slightly more stiction than the buttery 888 Evo Ti I’m used to. The damping system called TPC+, which stands for Twin Piston Chamber Plus, sports independently and externally adjustable high and low speed compression adjusts, both with a great range of adjustment (read not just run completely wound out like some other downhill forks). 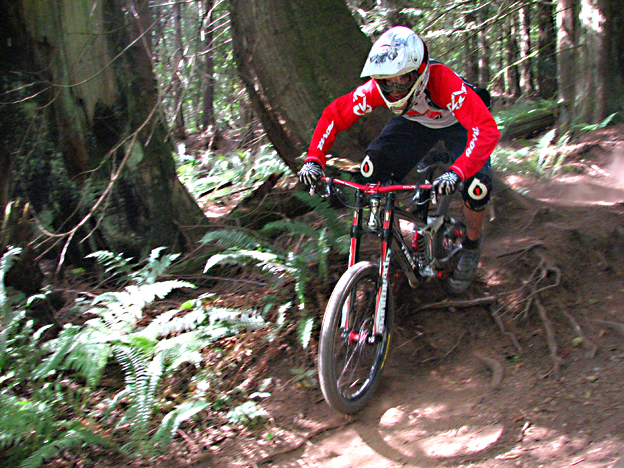 The Dorado doing what it does, eating bumps small and large. Photo ~ The Hoff

The externally adjustable compression damping circuits are augmented by a non-adjustable hydraulic bottom out circuit. The result is smooth, bottomless travel that can be adjusted from a “Balls! I have a flat tire” setting to a “rabid gazelle on speed popping off of every nano-root” setting. With just the external adjusters I’m sure the Dorado Pro can be tuned to suit even the pickiest rider. Expectedly the Dorado Pro excelled on the race course. The surprise was how well the fork performed everywhere else. Even though the Dorado is an inverted chassis, and thus theoretically less stiff than the competition, I didn’t notice any flex in the fork on even the steepest and tightest of sections. 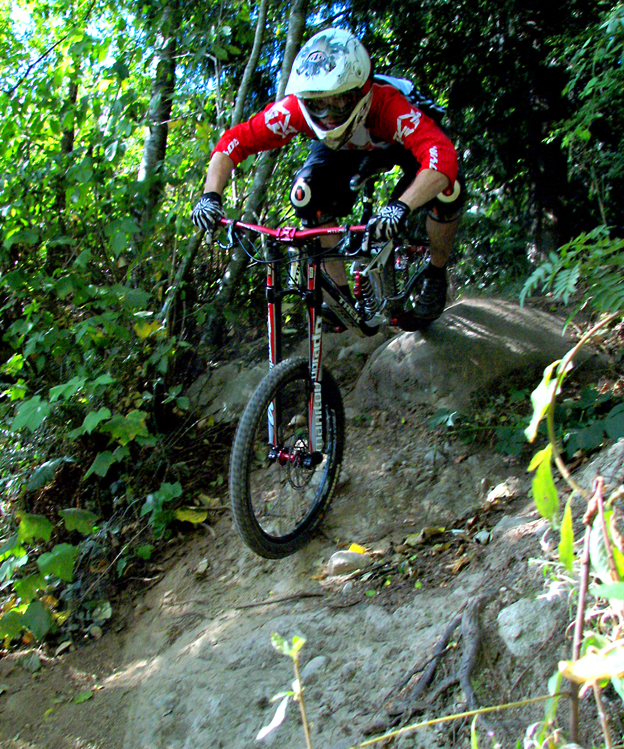 On steep terrain the Dorado inspired confidence. Photo by: The Hoff

Unlike some other manufacturers Manitou really stands behind their product and has offered every Dorado owner a free rebuild of the fork at some point in the first year of the fork’s life. Purchase the fork in Canada and Trident Sports adds a second free service, and a second year of support. I appreciate some of the details on the Dorado Pro such as the stanchion protectors, the thick high quality stickers on the upper tubes and the integrated cable guide. From the moment you remove the Dorado from its case you get the impression that it is a well engineered and beautifully made product. The net result is the Dorado Pro should stay looking sharp and provide years of enjoyment to even the most abusive riders. 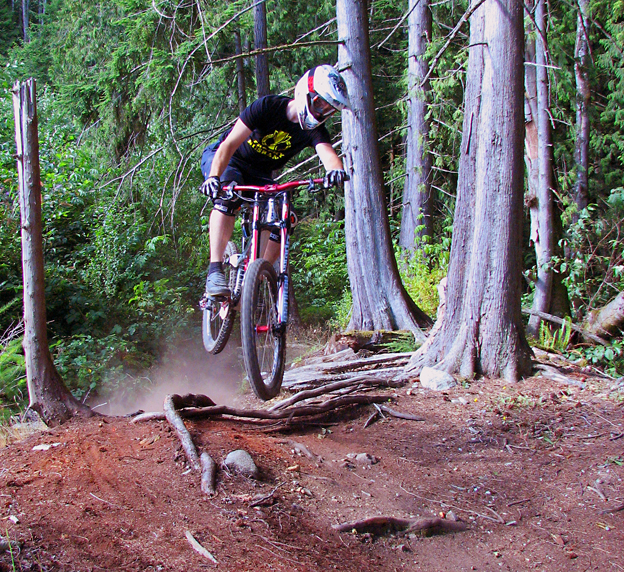 The Dorado seems to allow the rider to pop off just about any feature in the trail. Photo by: The Hoff

I’ve been on the Dorado Pro for 2 months and it’s still performing as well as it did on the day I installed it. I did notice two minor issues that require some regular attention; the air spring and the axle. I found after some extended abuse, or if the temperature changed significantly, the resting position of the fork would change. Sometimes this would lead to the fork feeling harsh on the trail, or the fork would suck down a small amount into it’s a travel. The solution is to simply bleed down the air spring, and then re-pressurize to your desired pressure. The second thing to keep an eye on is the axle. I had to keep the axle retention bolt well greased to prevent it from seizing onto the fork leg. I’m told this bolt will be changed to a new material to prevent this from happening on future forks. I also noticed that sometimes I would tighten the axle bolt, ride the fork, and occasionally the axle would mysteriously come loose. If the axle does come loose you’ll notice quickly as the fork becomes rather flexy. Take a minute to re-tighten the axle assembly and the fork is back to normal. 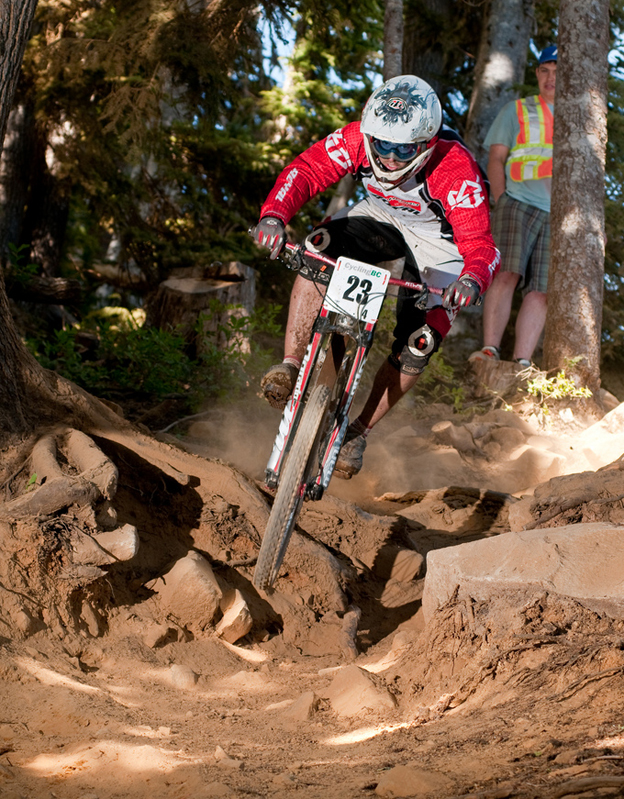 The Dorado in its element, tearing up the race course. Photo by: Dave Mackie

Besides that the fork has been flawless through multiple hard days of bike park riding, racing, and abuse on the Shore. Due to the abnormally dry summer here in Vancouver I wasn’t able to test the Dorado in the notorious North Vancouver goo and muck. That being said in talking with Dorado owners it sounds like the product can handle wet conditions without much fuss. 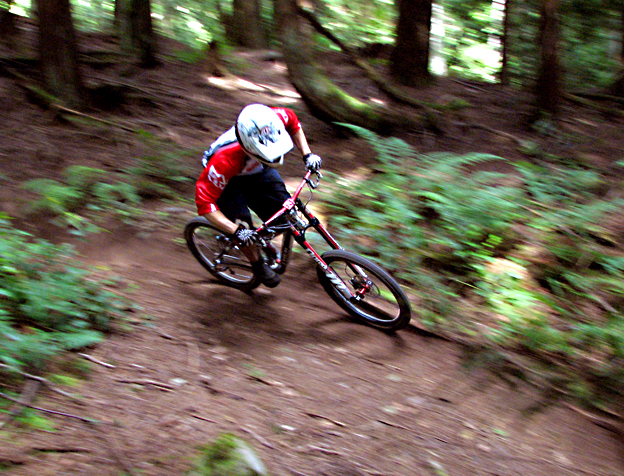 The air spring and wide range of adjustments allows the user to easily balance the bikes suspension, which makes railing high speed corners a dream. Photo ~ The Hoff

As a wrap I thoroughly enjoyed my time on the Dorado Pro. I think the Dorado Pro makes a good downhill race weapon, and if you’re set on an air sprung fork I thought the damping in the Dorado  out-performs the damping in the Boxxer World Cup. On the race course I personally prefer the slightly more supple feel of a coil spring, and admittedly on pinned top to bottom laps down Garbanzo I felt slightly more hand and arm fatigue on the Dorado Pro than I’m used to on my 888 Evo Ti. Where the Dorado impressed me the most was off the race course. Without adjustment and as if by sixth sense the Dorado feels great on every trail, and never overwhelmed. At the end of the day I‘d highly recommend the Dorado Pro for the rider who wants a high end fork with a wide range of adjustment, who intends to ride aggressively down a vast array of trails and terrain.

It sounds like Manitou has worked out quite a few of the kinks since our last Dorado test.  Are  you convinced?  Share your thoughts here…