What a week! We’ve just spent five days riding the west coast of Scotland with downhill mountain bike world champion Steve Peat and trials stars Hans Rey and Danny MacAskill, and in that time we managed to pack in trials in Eilean Donan Castle, heli-biking in Torridon and whisky tasting on Skye. Hans and Steve had the idea of coming to Scotland to ride the best trails and we were only too happy to show them – and Danny – around!  The whole trip was filmed by Mark from Reset Films and Rob Summers working for Proactive TV, and photographed by Andy McCandlish. We started off at Eilean Donan Castle on a blindingly sunny evening, where Danny and Hans did 360’s, dropped off the castle walls and other crazy bike tricks. 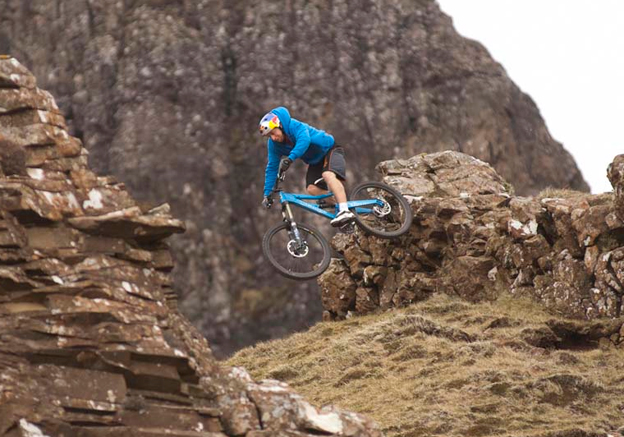 Danny Macaskil now has a duallie sponsor – Peaty’s former frame supplier, Orange.  It’ll be interesting to see what he accomplishes on a double bouncer.

The next day we headed out to Skye to ride and film up in the monolithic, volcanic rock columns of the Quiraing.  The trail was superb, but the weather was pretty miserable and the only thing that cast any light in the mist was Peaty’s fireworks that he’d carried in his bag for the entire day. Who needs tyre levers, when you have pyrotechnics?!  We finished off the day with a tour and tasting session at the Talisker Distillery. That went down well – literally. 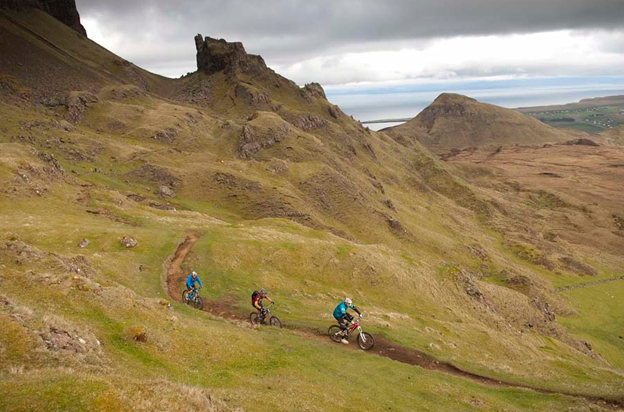 I was surprised to discover that the Highlands were once covered with trees.  Only about 1% of the forest now remains.

Thursday, and another epic day on Skye.  We started off with a quick stop-off at Danny’s house to see his mum and dad and to be introduced to The Giant MacAskill – an ancestor of Danny’s whose massive stature has earned him an entire museum to himself in Dunvegan.  We then drove out to Glen Sligachan to ride the picky, technical trail through the glen. There were a few punctures along the way (no one looked to Peaty for tools), but everyone was grinning and talking about the trails as we headed off to our accommodation for the night, a fishing bothy out in the middle of nowhere on the edge of a loch. 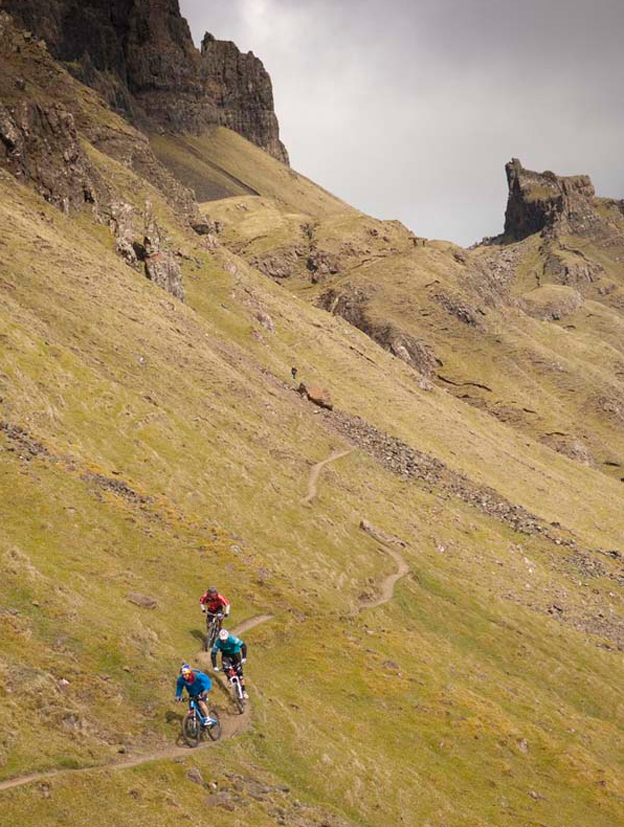 In chronological order; Danny leads followed by Peaty and Hans.

After a late night in front of the fire with a few drams, we were ready for the main event: the heli-biking.  Watching the helicopter coming over the horizon at 08.15 in the morning, then landing right in front of us was almost unreal!  Then we had to go about the process of taking the doors off and working out the best way to get all the bikes, riders and cameramen up the hill in the most efficient way. 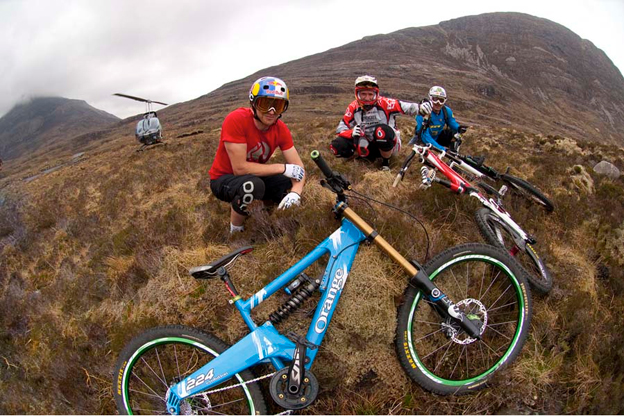 A helicopter to the top – in Scotland?  Sounds like a wee bit of overkill – unless you are doing multiple laps like these lads.

Once we’d sorted out the logistics we were ready for the first run, and the weather wasn’t too bad!  Hans’ headcam flew off on the first run and Steve stopped to pick it up, thinking that Hans and Danny would wait for him.  But they were being told by the camera crew to keep going, so we only got two riders on the way down on the first run. 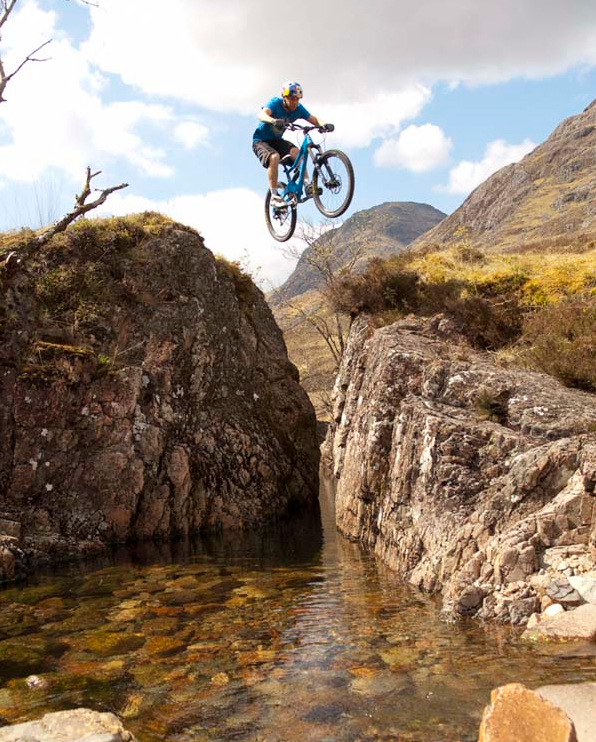 Ah – it’s like that is it.  Danny gaps a Scottish water way.

After bacon rolls and some discussion about the trail and the filming we headed up for the second run, and this time got some amazing shots of all three riders coming down the trail and that was a wrap.  Time to get back to the bothy and chill out for the first time all week. 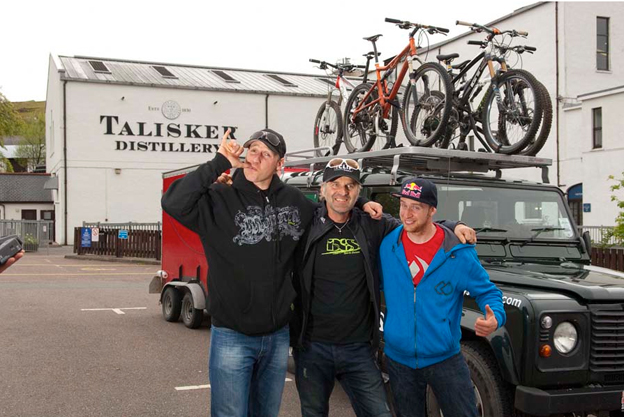 Anyone game for a wee dram?  Apparently the lads are.

On our final day we rode other trails in Torridon and cherry-picked the best sections of each to suit everyone and to get the best shots.  The final leg was back down to Aviemore where Danny and Hans put on an impromptu trials demo in the town centre for some very surprised and delighted tourists. 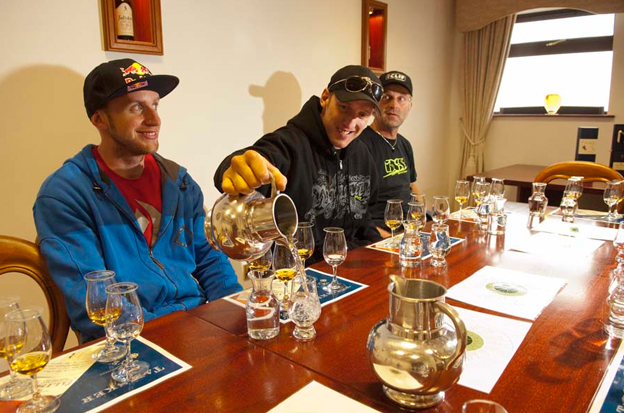 We spent the last night having a few drinks and catching up with mates in the Old Bridge Inn in Aviemore – the perfect end to an epic mountain bike trip on the west coast of Scotland.
Follow in Steve, Hans and Danny’s tracks on our Torridon and Skye holiday. 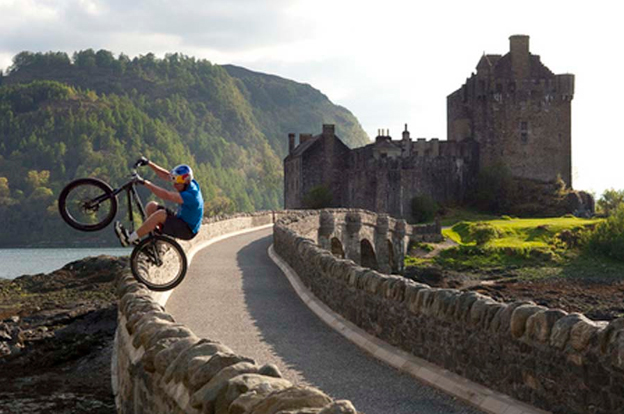 Have you ridden a mountain bike in Scotland?  What was it like then?  Was your experience like that of this unlikely trio?  Pour it here…