Vienna, Austria, April 12th, 2010 – Over 50 riders from 14 countries celebrated the fifth anniversary of the Vienna Air King. This year’s edition was the kick off event for the Freeride Mountain Bike (FMB) World Tour. Sam Pilgrim (GBR/1st place) had a strong battle with last year’s winner Martin Soderstrom who finished in second place. The youngster John Alm Hogman came in third place, Jamie Goldman got fourth, and the Austrian local Andi Brewi fifth. The masses of spectators cheered for the riders in front of the historic city hall and got a whole bunch of sick tricks like 360 double whips, flip combos at the step down, flairs, super flips, or flipwhips in return. But the sickest trick was the cork 720 from Andi Wittmann (GER) in the separate Panasonic-Best-Trick-Competition on Sunday. Overall 10,000 Euros prize money and a hard rocking afterparty made the Vienna Air King a perfect start into the contest season for riders and fans. 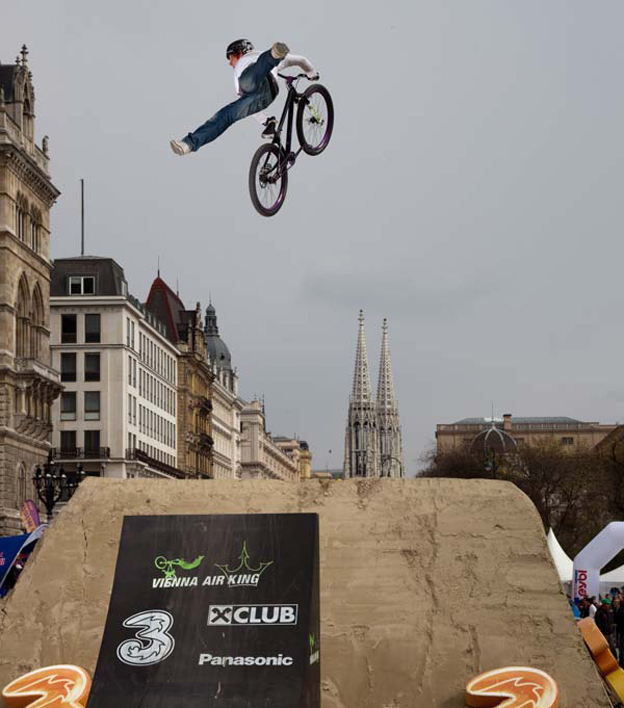 The weather conditions didn’t make it quite easy for the riders as well as for the organizers. The unstable weather, which is typical for April in middle Europe, brought just a bit of sun, but a lot of strong wind and rain. Starting a run often just meant gambling, because the gusts of wind were unpredictable. Some absolute top guns like the Canadians Darren Berrecloth and Graham Agassiz or the Germans Amir Kabbani and Benny Korthaus had bad luck, didn’t make thru the line and crashed in some of their runs. 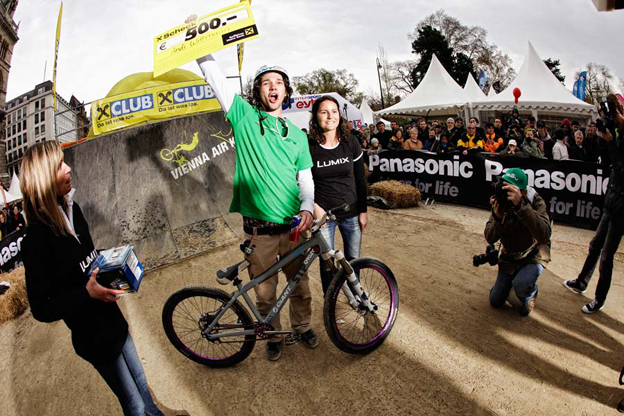 A big surprise was Andi Brewi, who showed an x-up at the start drop, followed by a superman Indian, barspin and clean backflip turndown on the doubles as well as a flatspin 540 at the quarter. The fifth place was well deserved for the local from Vienna who had put lots of great effort into the course built, so all riders were really content with the jumps. Jamie Goldman kept it quite technical: a backflip at the step down, superman seatgrab, a 360 followed directly by a opposite 360 and an x-up secured him the fourth place. Third placed John Alm Hogman tail-whipped the drop, followed by a huge superman can can, a 360 and a 360 tailwhip, finishing with a whip at the quarter. Martin Soderstrom and Sam Pilgrim fought the big battle for the Vienna Air King title. Martin won the last year’s edition and Sam in 2008. Martin showed a stunning second run: 360 at the drop, double tailwhip, 360 one hand (which was probably planned to be a bar-spin), 360 double tailwhip and a tail tab to foot jam on the quarter. This run that made him so happy and satisfied with his performance that he decided to skip his last run, also because the wind got stronger towards the second half of the finals and he was leading the pack since his best counted first round. Sam knew this would be his ultimate chance to win this comp and he did it: His insane third run consisted of a backflip-table at the step down, backflip x-up one foot, 360 table top, 360 double whip and flair at the quarter! It was tight between the two, but the variety of rotating tricks of Pilgrim made it not too hard for the judges. Sam’s first place and 3,800 Euros cash were well deserved. 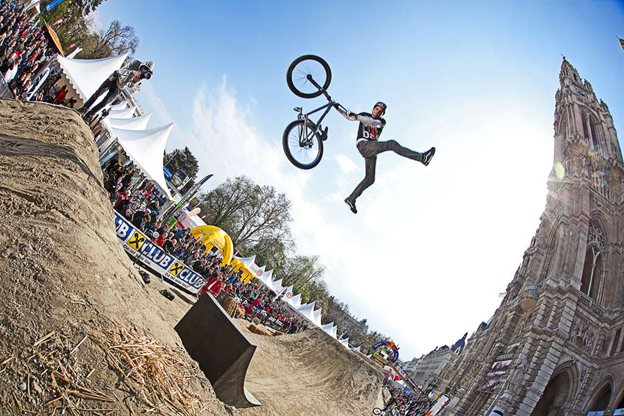 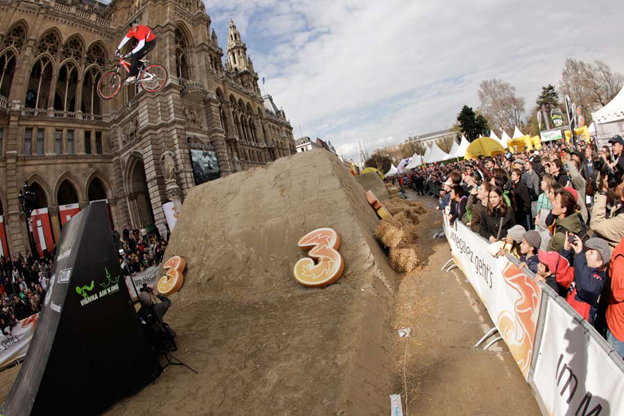 The TOP15’s variety of tricks was very diversified and at the end following results marked the end of an exciting Saturday at the ARGUS Bike festival that features the Vienna Air King each year: 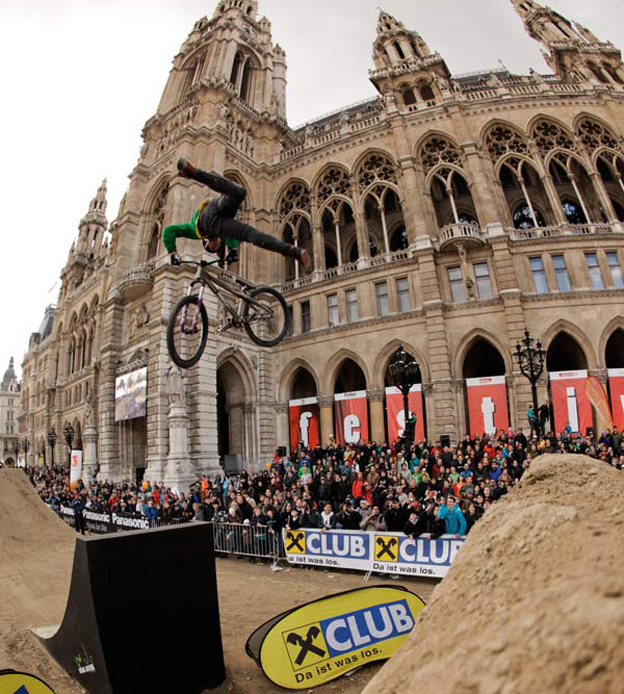 The finals were moved to Saturday afternoon, because of the absolutely terrifying weather forecasts for Sunday: gusts of wind up to 60 km/h, rain guaranteed and ice pellets likely. So the riders could party already on Saturday afternoon and have an easygoing Panasonic-Best-Trick-Competition on Sunday, if the weather would be ok. That was the case: sun was shining and it rained just for very short periods. 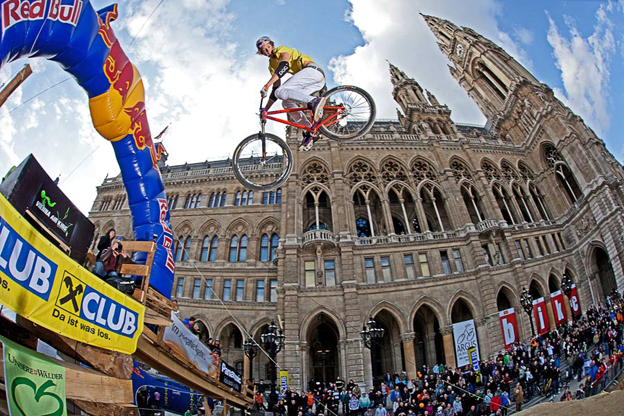 The riders obviously had a great session, pushing each other the best way they could. Martin Soderstrom showed 360 double tailwhips and a double tailwhip at the over three meters (10 ft.) high start drop. Dawid Godziek (POL) surprised the crowd with a 360 triple barspin. Danny Pace (GBR) landed a frontflip tuck no hand, Sam Pilgrim a frontflip x-up as well as a 360 down side whip and a 360 superman seatgrab. But it was Andi Wittman who sticked a super clean and styled cork 720 at his third try. The win of the easygoing Panasonic-Best-Trick-Competition, 500 Euros cash and a HD-camcorder were well deserved, no question.

The Vienna Air King thanks all his long-term partners – Raiffeisen Club, Red Bull, Panasonic and 3 – that made this great contest possible. You can look forward to a sixth edition in 2011. 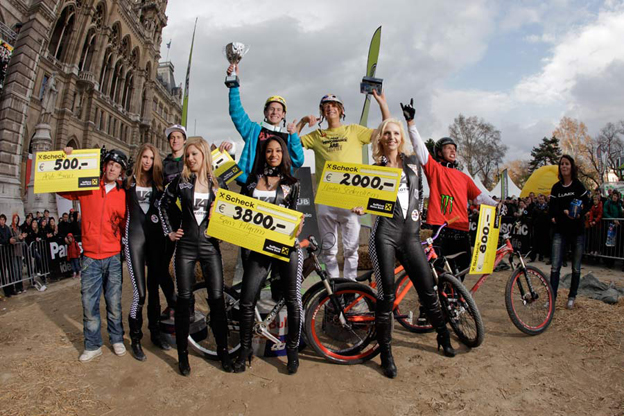 For the official Vienna Air King 2010 highlights video clip, will be online very soon on: www.watch26.tv.