We began to feel the Yukon groove.  Things were on their own schedule but everything was getting done – thanks to a good 20 hours of sunlight.  We fixed bikes, stole parts and loaded up for the drive to Carcross.  The village on the road to Skagway may be most famous as Ted Harrison’s first stop in the Yukon, and one look at the setting makes the inspiration he found easy to comprehend. 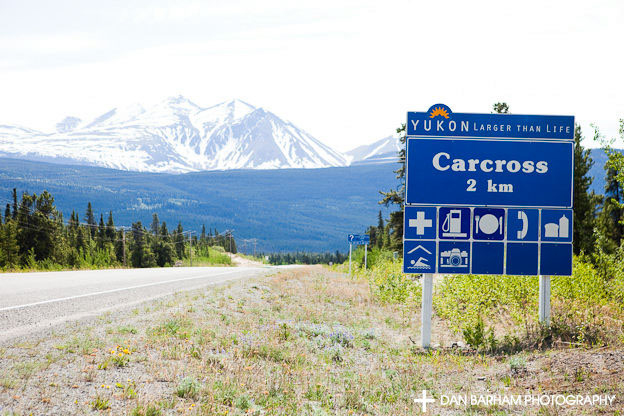 Carcross is set in a heartbreakingly beautiful location.  Dunes on the beach and nearby in the ‘World’s Smallest Dessert’ frame the deserted-feeling town. Peaks surround Lake Bennett, some leaning menacingly over the water and others set back a polite distance.  Each time we emerged from the trail near the lake I was taken aback by the splendour at hand. I wanted to move north, write shitty poetry and live in a prospector’s cabin with my family.  And ride the mountain bike trails every single day. 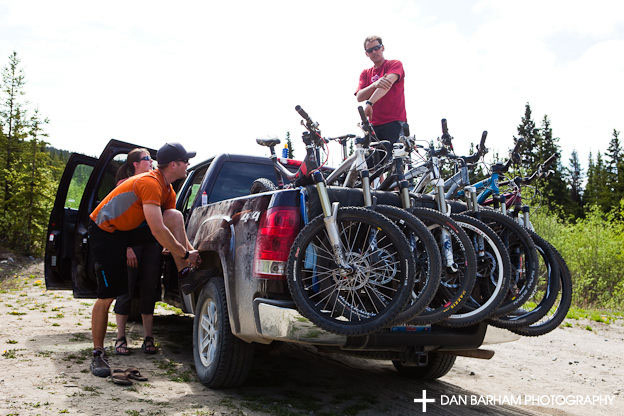 To the top shall we?

Montana mountain looks over the town from 7280 feet and soon we were shuttling part way up. The trails on Montana are the byproduct of the Carcross Singletrack to Success Project, which was initiated by Carcross Tagish First Nation in 2005 to develop adventure tourism in their traditional territory and get their youth out on the land, building and riding trails. With support from government agencies and private partners, the S2S Project has created over 35 kilometres of trails that are comfortable being called world-class. Jane Koepke and Derek Crowe have led a dedicated crew of trail builders, including Carcross locals Shane Wally and Jacob Huebschwerlen and Capilano College mountain bike operations graduates Joe deGraff and Spencer Clark. 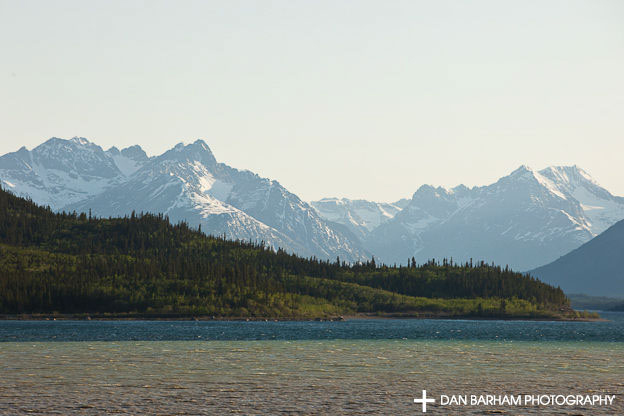 The first trail we dropped into – Tin Cup I think it was – felt like it was built by a granite tossing super hero.  Undulating roller coasters of rock were seamlessly incorporated into the trail.  A berm would be followed by a low consequence wood feature, a wall ride opportunity or perhaps something to manual off.  These trailbuilders know how to have a good time on a bike. 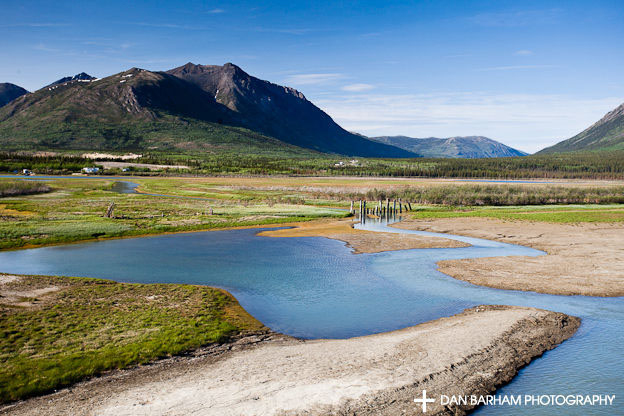 At a certain point it became clear that everyone was having a great time – except for Dan Barham our long suffering photographer.  This was his day to leave the camera behind and he didn’t have his groove on.  He eventually gave up the source of his foul mood: tires.  We had an extra set of Maxxis Ardents in the back of the truck so we quickly swapped his sub standard rubber and loaded the truck once more.  Happy Dan! 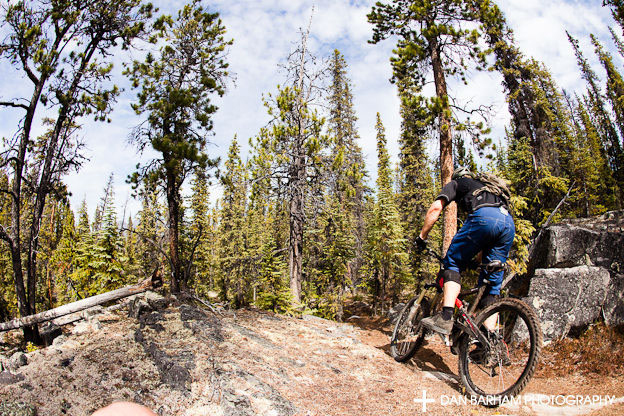 Rory Schalko dropping in for our first run of the day.

Sylvain Turcotte has the perfect temperament for running an adventure business. Nothing will stop him from smiling and he’s going to make sure everyone has almost as good a time as he’s having.  Things went sideways, truck tires went flat, we were late and demanding – the way journalists often are – and he rolled with everything, grinning.  And then ripped down the trail. 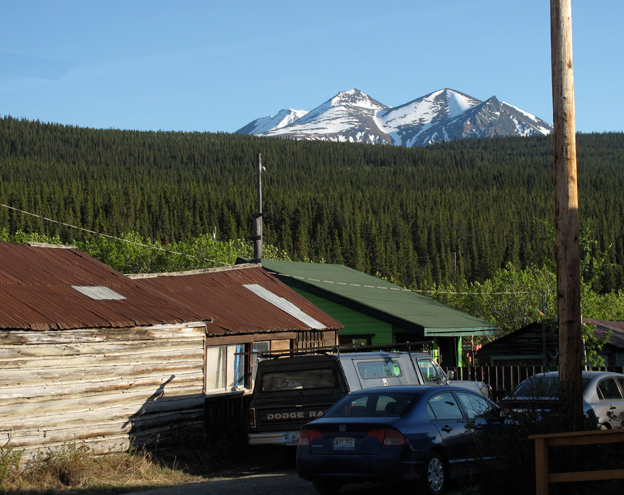 Montana Mountain overlooks the town of Carcross.  The Sam McGee Trail is an epic pedal around the mountain.  Sadly there was too much snow to ride it when we were there. Photo ~ Cam McRae

Marsha did a great job of keeping us on task.  Load up – it’s time to ride boys – and made sure nothing went haywire.  All this at the beginning of her 100 day challenge which saw her ride every day for over three months.  The long days are a secret weapon because leaving for an hour-long ride at 11:30 pm is no problem. 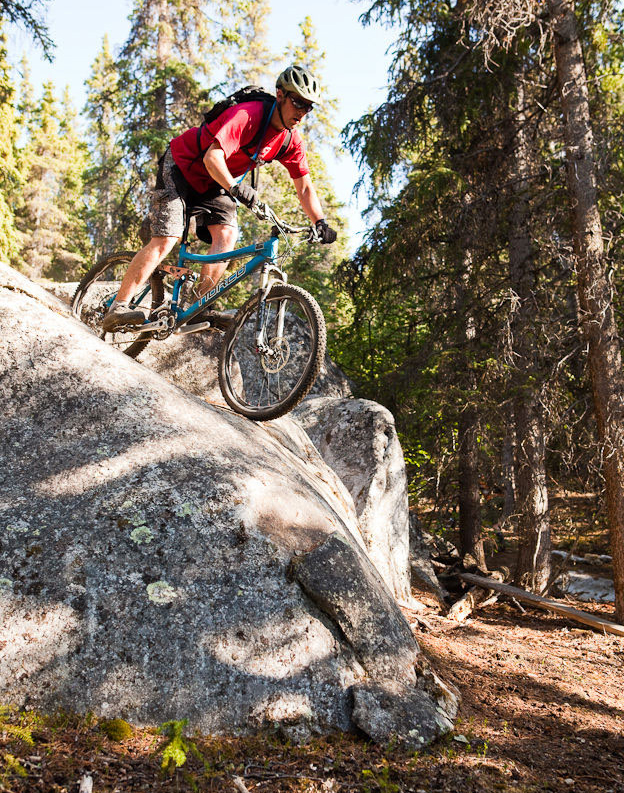 Sylvain focusses on the task at hand.  One of the few times he wasn’t smiling.

Together Marsha and Sylvain were an unstoppable force.  They were genuinely easy to be around which is huge for anyone hoping to book return guests and have them spread the word. 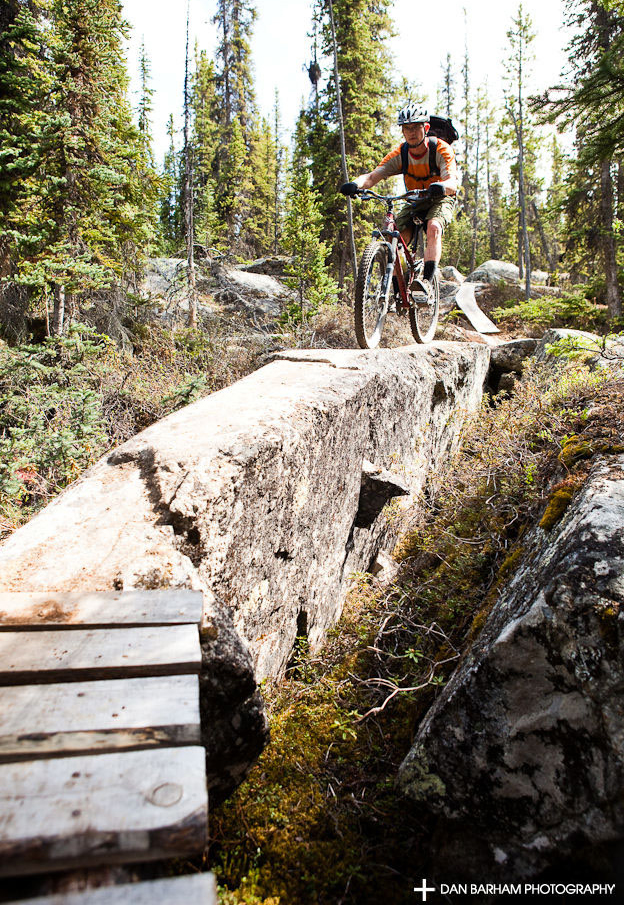 Dustin Rainey kept us happy – and safe – for the whole trip.  He also explained how the rocks got to be this way.

The Yukon sucks people in.  They come for a week and are settled two winters later.  Everyone I spoke to was infatuated with their chosen home.  They loved the wild, the opportunities to get away and play – and being surrounded by young, like-minded folks. 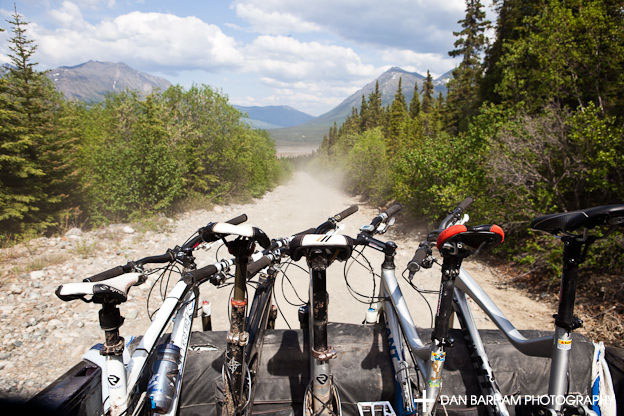 Another lap?  Don’t mind if I do.  You could easily have an all mountain adventure and climb Montana Mountain – but we were greedy for vert.

I’ve been on a lot of big group rides and I admit to having felt a bit bitchy when our group swelled from 5 to 10 on our final day on Montana Mountain.  Our remaining time in the Yukon was scarce and I wanted to wring out as much as I could.  The group was composed mainly of riders we’d seen before, some one dh bikes, others in full lycra and Sylvain – the gentleman that he is – was happy to have them along. He was just as gracious and good-natured with his friends as he was with us his guests.  Everybody matters to Sylvain. 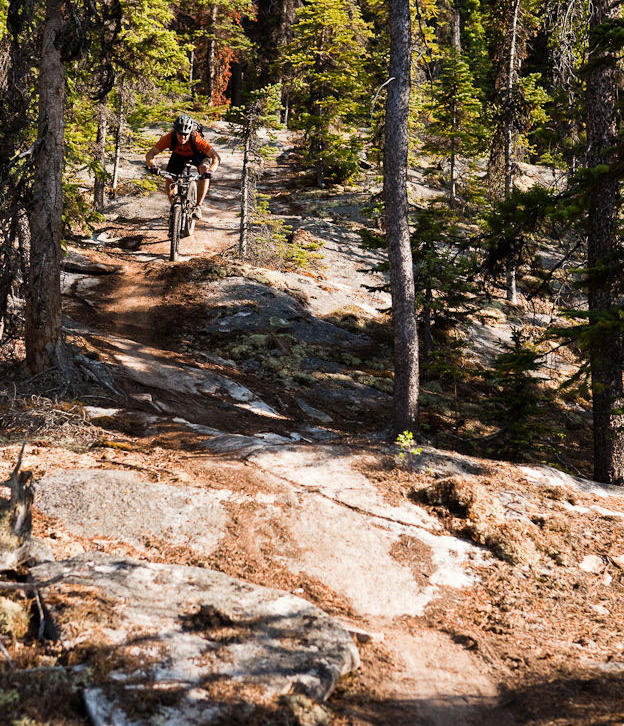 Pete Roggeman on a steep granite line.  When we weren’t on rock we rode some of the most glorious dirt ever.

I soon felt sheepish for being selfish as the group gelled and everyone did a great job of keeping the pace up.  The size of the group just amped the fun. We rode and shot more cool sections of trail and continued to be amazed.  I’m long past the days when we used to session stunts for half an hour at a time but on Montana Mountain I was often happy to stop and play so Dan Barham could get some shots.  Flow, challenge and opportunities to play all mesh nicely here. 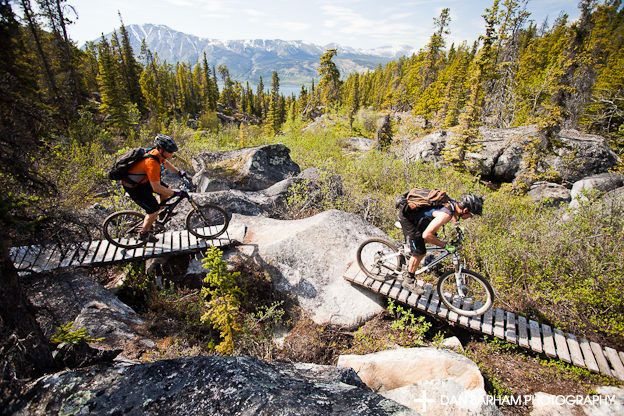 Generally the structures kept the flow up (as pictured above) but there were some challenging moves in a few places.

We started our runs on a high speed section of trail called Telegraph and then we’d choose the next trail to enjoy.  The different sections made the network feel like several mountains all packed together.  A smooth ribbon of big ring singletrack lead into granite tech followed by some steep switchbacks leading into amazing bermy glory dirt punctuated by some nicely built tables.  Yep – all in one run. 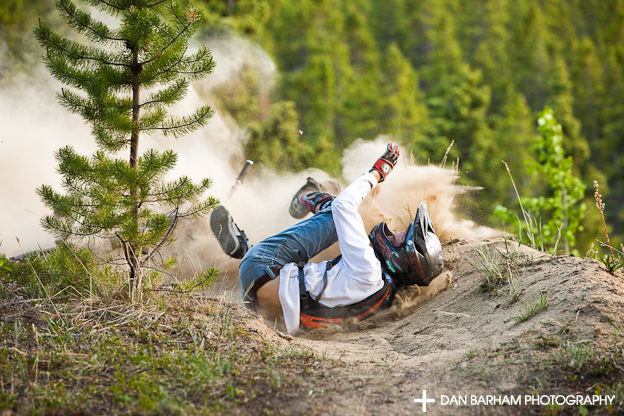 Julien Revel getting a wee bit too aggressive for Dan’s camera. 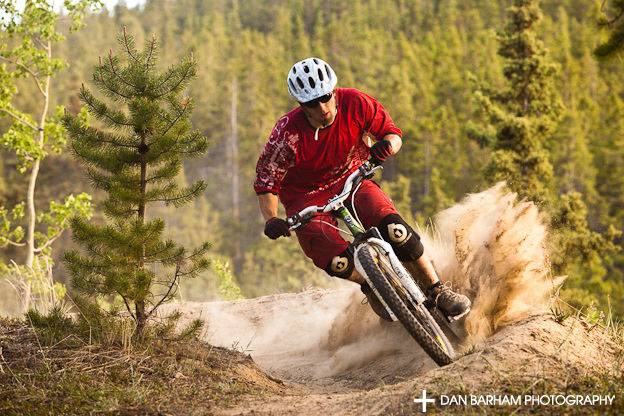 The original northern residents on each side of the border would happily take you for everything you had.  Marsha told us of the shipper who would, for a small fee, send gold back to your mother or wife back in Sacramento or Wichita.  Only packages never seemed to arrive.  Another cunning Skagway businessman, Soapy Smith, had a telegraph machine that would allow you to send word to your kin.  Only the wire ended on the other side of the wall it was attached to. 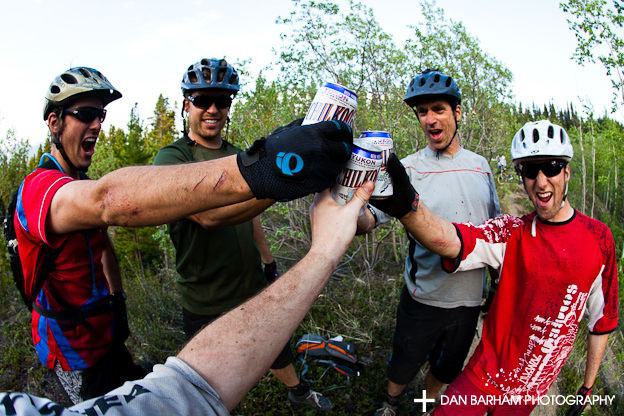 How does a Yukon beer taste right about now? 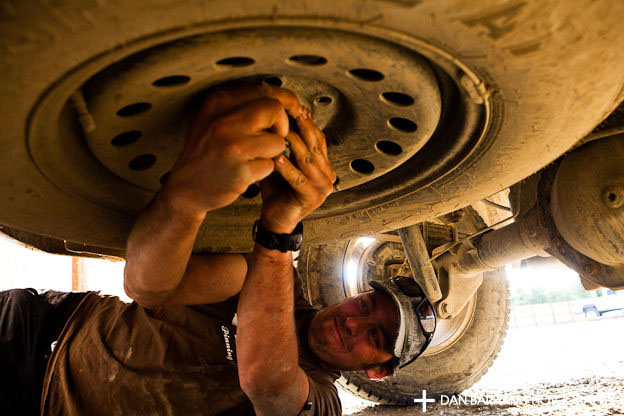 Our truck was feeling the pain of shuttling before our trip back to Whitehorse.  Sylvain to the rescue.

Today Whitehorse has a youthful optimistic feel.  You get the sense – at least on the warm days of our visit – that everyone is here by choice and there’s nowhere they’d rather be.  Everyone has a dog, a bike and some XC skis – and they’ll invite you along or help you out without hesitation. 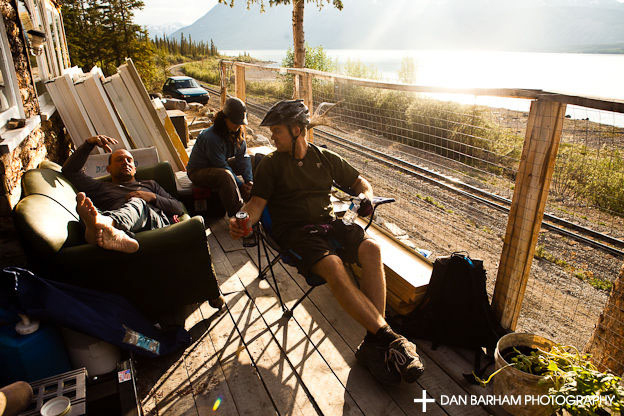 Pete Roggeman enjoys a beer with Wayne Roberts – another pioneer of mountain biking in the Yukon. 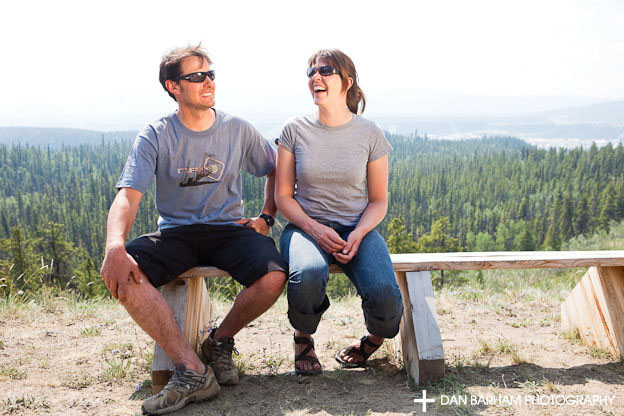 These current residents gave us some pointers on riding a mountain bike and keeping priorities straight but they didn’t try to fleece us.  They made sure to show us a good time just because that’s what they do. I’ve ridden on some nice mountains in beautiful places, in perfect conditions and my trails here at home are some of the best in the world.  I’m spoiled – but I came home from the Yukon having experienced a mountain biking adventure that was right up there with my best ever.

Here’s some of what we learned.

Bikes
We took all mountain rides – Dan and I were on Trek Remedies and Pete was on an Ibis Mojo (which he turned out to be broken when we arrived – but it kept on kicking).  These were the perfect machines for the riding we did.  There were a few places you could ride a DH bike but it wouldn’t be the weapon of choice. A 5 and 5 bike would work if you wanted to stay away from some of the more challenging trails and focus on epics. Let’s face it – under the right rider a hardtail would work.

Getting There
Air North operates several flights a day from Vancouver, Calgary and Edmonton during the summer months.  Apparently there are also direct flights from Germany to Whitehorse during the summer.

Bugs
We had one section of one ride when the mosquitoes were horrendous.  It wouldn’t have been so bad if Dan hadn’t been taking photos. Otherwise they weren’t an issue at all.

This trip will remain indelibly etched.  I’m not sure what the exact formula is but Boréale seems to have it nailed.  Want to head north to ride?  Been there?  Share your wisdom here…