NOMADc
No, this isn’t an April Fool’s joke, and yes, this is the official release for the new carbon fiber Santa Cruz Nomad. Do not confuse it with any of the previous, most likely inaccurate, information that has leaked already. There’s a lot of ground to cover here, so we apologize in advance for the length of this email, but bear with us. 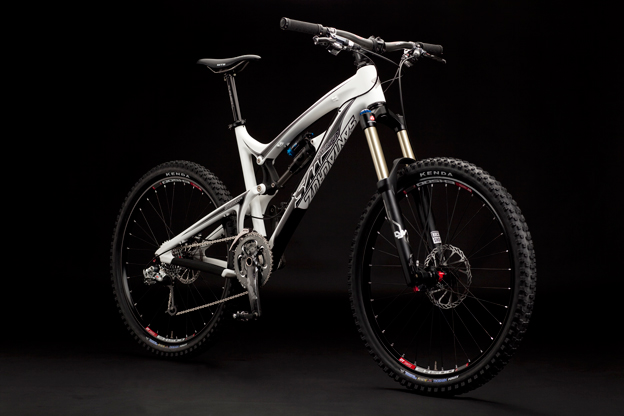 It seems like barely a year and a half ago we totally revamped our beloved gnarl-hound with updated suspension, geometry and a host of details that saw an entirely new Nomad emerging from where the old Nomad had been – lighter, sleeker, snappier and at the same time tougher. Time flies. It was just a year and a half ago that eight unlucky souls got mangled in the Hellride while claiming first saddle time aboard the new beast. And while the now tried and true aluminum Nomad is still a vital part of our lineup, we decided to splice some carbon fiber into it’s DNA and see what happens. 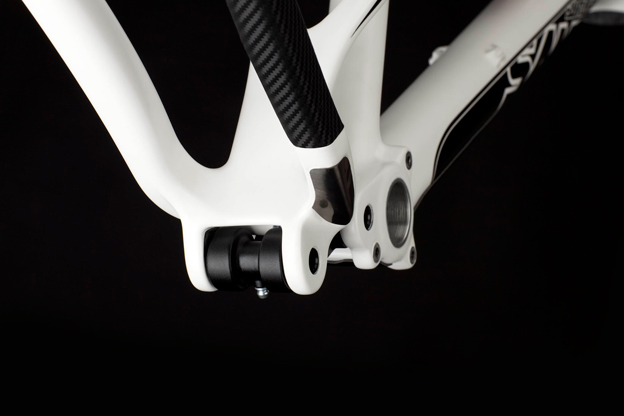 Carbon Fiber Frame
The new Nomad-c marks our fourth carbon fiber bike, and is the culmination of what has been a very enlightening process for us, pun intended. In this case, the move to a carbon fiber chassis has chopped a whopping 1.25 pounds off the weight of the aluminum Nomad, while at the same time increasing strength and stiffness by large margins. The existing aluminum Nomad isn’t exactly a porker in terms of weight or a wilting violet with regard to strength, so being able to reduce weight by that much and at the same time increase strength and stiffness, without skimping on any features, is about as much of a win-win scenario as we could hope for. It’s light. We are seeing frames weighing in at 6.1 pounds with a RockShox Monarch 3.3 shock. 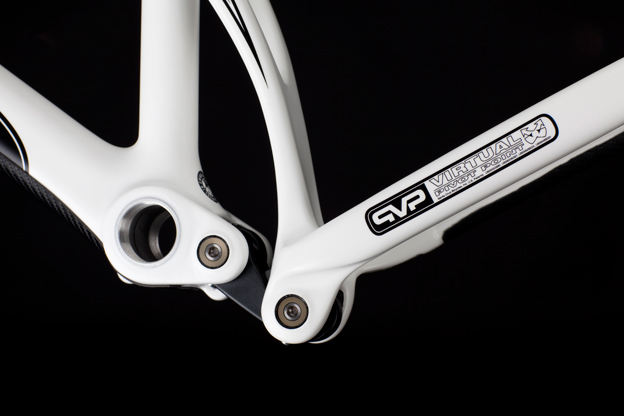 (Bear in mind, this is a tad heavier than the 5.9 pounds that is floating around out there on an early-print pdf of the marketing tri-fold for the Nomad that somebody leaked onto the interwebs before we intended anything to go public. That’s what happens when the wrong info gets out before all the proof reading is done. And before anyone calls foul about using a light shock like a Monarch for a hard hitting bike like the Nomad, add a third of a pound for a Fox DHX air, or just over a pound for a DHX RC4 coil. Then go compare…) 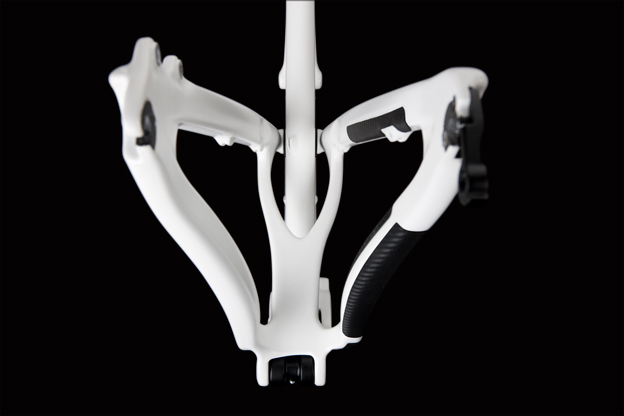 There are three key aspects to our carbon fiber process that differentiate it from many others and at the same time allow us to achieve the strength (and stiffness) to weight characteristics that we are so in love with. They are:

One piece lay-up and curing
By laying up and curing the entire front triangle as a single piece, instead of assembling or bonding pieces together during the process, less material can be used to achieve the same end. Suspension pivots, disc mounts and the ISCG05 tabs are all molded into the frame in this process. Additionally, we overbuilt things in critical areas. The underside of the downtube features five layers of UD fiber, two of aramid fiber, and one of 3k weave, in order to thrive in sharp and pointy environments. The chainstays also benefit from extra layers of material. These all serve as added insurance in rocky terrain. 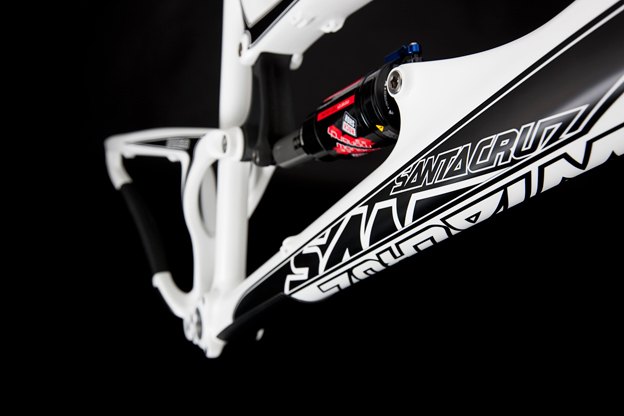 Continuing fibers around tube junctions
One piece lay-up and molding allows the use of continuous fibers throughout the frame, meaning the structure can more widely distribute loads and absorb impact energy.
Net shape lay-up and fiber compaction
Our proprietary manufacturing process allows us to precisely control both the outside and inside frame shape while compacting the laminate layers, which in turn results in superior stiffness and strength while eliminating excess material.

We don’t have any fancy acronyms for this, but it is unique – nobody else is making carbon fiber mountain bikes this way at this time. And, while we don’t have the selling power of a carefully focus-grouped nickname behind the process, the results are pretty enough that we are proud to show off what the insides of our frames look like. You’d be surprised what you might find inside some of the other frames out there… 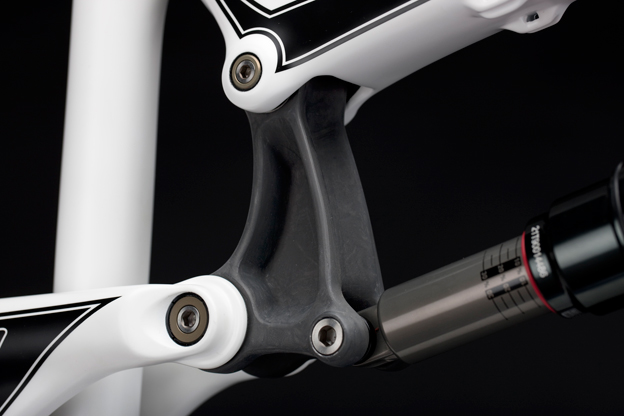 VPP Suspension
The suspension on the Nomad-c is the same as found on the aluminum Nomad, featuring our latest generation Virtual Pivot Point design with 160mm of travel. VPP is defined by a pair of counter-rotating links that offer a falling- to rising- shock rate, and instant center migration traits that minimize chain growth and maintain lively pedaling with a designed-in degree of anti-squat. The shock rate allows for plush, compliant suspension behavior in the early part of travel, letting the shock react quickly to trail garbage and smaller impacts. Then, as the shock rate flips a to rising rate later in the travel, it offers a nice progression to resist bottom out near the end of the stroke. The end result is a suspension that performs exceptionally well over a very diverse range of terrain AND at the same time pedals with an efficiency throughout that outshines many bikes with less travel. 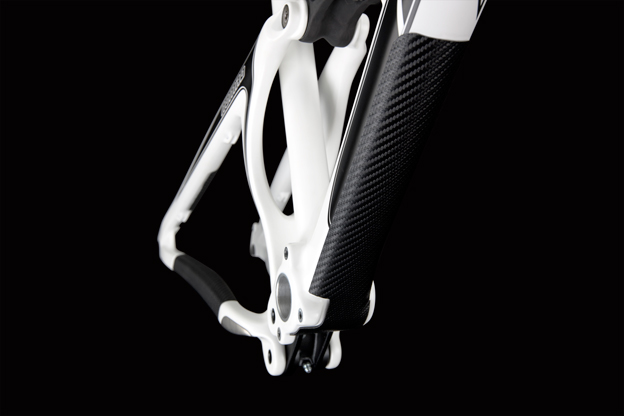 An important aspect of our VPP suspension is the hardware. The lower link is aluminum and has a pair of grease ports built in to ease maintenance, while the upper link is molded carbon fiber. Pivot axles are 15mm diameter aluminum pieces that thread into the frame on one side, and have nifty locking collet heads on the other – this allows them to tighten down and correctly preload the angular contact pivot bearings (another not-so-common piece of hardware) to keep everything moving smoothly and at the same time wiggle-free. By threading into one side of the frame and then locking into the other, the pivot hardware plays an important part in ensuring that all these carefully designed, stiff, flex hating pieces of bike continue to behave in a stiff and flex-hating fashion. They also are designed to allow for easy removal for servicing when the time comes – no need to remove the cranks or disassemble the bike around the pivot hardware. 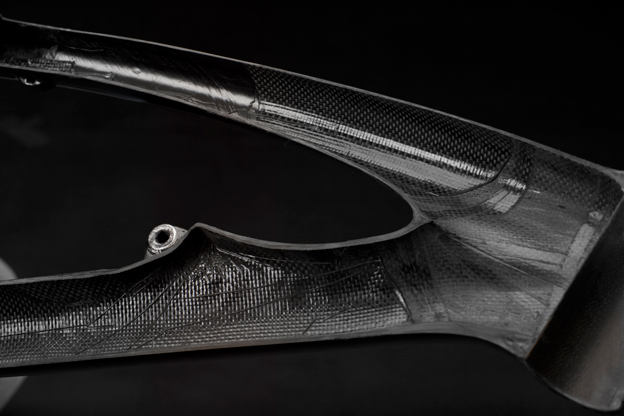 Attention to Detail, and stuff…
Alongside the carbon fiber makeover, the VPP suspension, and the trickest pivot hardware in the world, we added an impact absorbent protection strip underneath the downtube and along the drive side chainstay and seatstay. There’s a metal plate where the chainsuck gremlins usually strike. You’ll find cable stops for dropper seatposts integrated into the frame. An ISCG05 chainguide mount is molded into the bottom bracket area during lay-up, as are the disc brake tabs and dropouts. There’s a 1.5″ headtube up front, since we figured this bike would probably be getting treated with a bit more abuse than most taper-steerer forks would be intended to see. You can have it any color you want, so long as you like white with black decals or a matte carbon color with gold pinstripey decals. 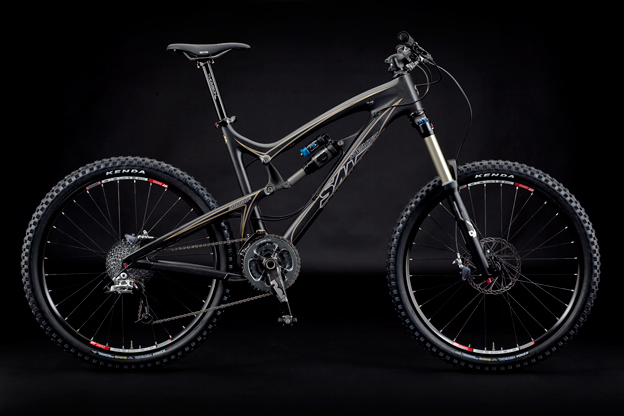 The Nomad-c will also be available for delivery starting mid-June, in all the usual build options per our website (but we won’t have a page up for this specific model for a few more weeks. Hang in there, we’re working on some crunchy new website goodness!), with prices starting at $2499 US MSRP (read that again, US MSRP) for a frame and Monarch 3.3 shock.

I am in lust with this bejeweled carbon masterpiece.  How is it landing where you are?  Confess your desires – or absence thereof – here….