How do you classify Urge Nepal?   Is it best called a trip, an adventure, a race or a humanitarian mission?  It’s all these and more since it’s also called the second Fabien Barel Invitational. 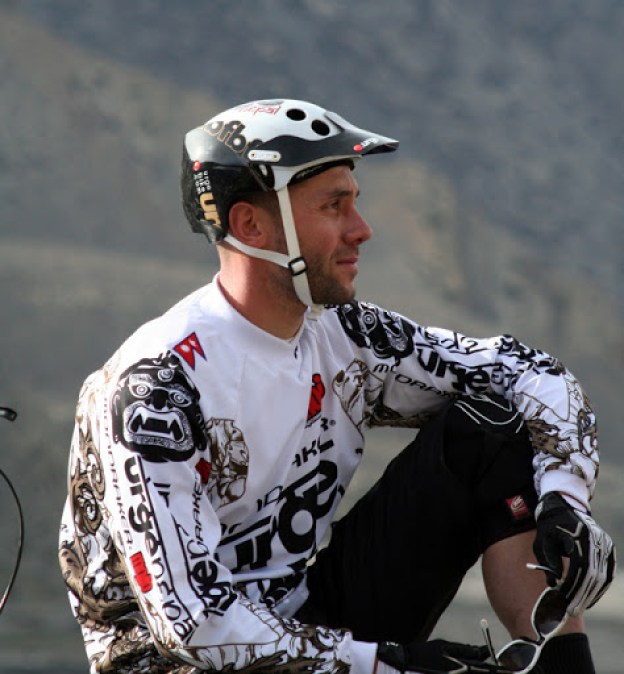 Fabien Barel seems to be committed to both the sporting and humanitarian aspects of these events.

Urge Kenya in 2009 was an epic adventure and a hard act to follow.  The race was exciting and the humanitarian element produced exciting results for the local population.

On the rider’s side, Fabien Barel, the two time world DH champion, managed to gather a sample of the best pilots on the planet. Here’s a list of those chosen; 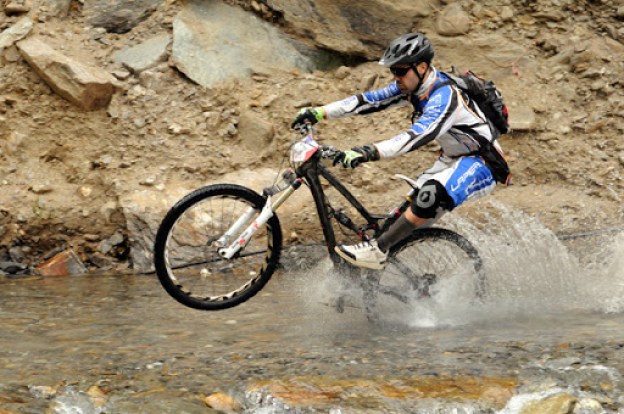 You know it’s a big draw when Nicolas Vouilloz is coaxed out of his semi-retirement from mountain biking.

Sabrina Jonnier (multiple winner of Cups and World championships DH)
Nicolas Vouilloz (the pilot the most titled in DH by the history(story)
René Wildhaber (the biggest specialist of the planet in DH marathon)
Darren Berrecloth (a monument of the world scene Freeride)
Alex Balaud (twice winner of the Trophy of Nations Enduro)
Sam Peridy (World champion DH Master’s degree)
Olivier Giordanengo (one of the biggest specialists of French enduro)
Greg Doucende (multiple winner of the Mountain of Hell)
Maurin TROCELLO ( top 10 enduro series)
Nico Vink (the most beautiful stylist of the circuit of world cup DH)
Simone Zaniboni ( top 10 of the great Italian enduro)
And finally the local pilot Kumar Pong. 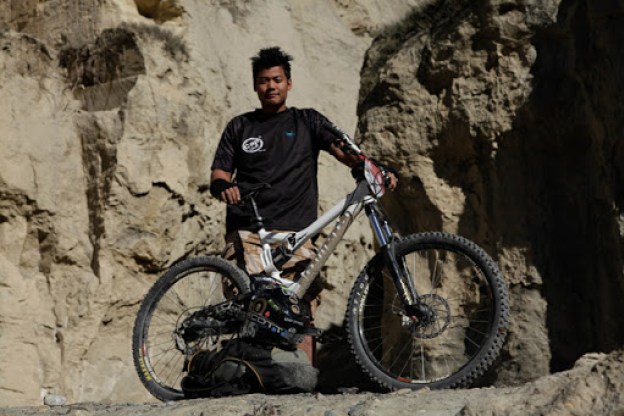 It looks like Kumar – the sole Népali rider – got a new ride before the event.

The adventure began in Paris’ CDG airport because a storm raging in Ile-de-France prevented planes from landing. The group is already cut in two at first because the unfortunate Vink, Balaud and Trocello missed the transfer and were forced to arrive 30 hours after the other riders. Not a good start considering the need to acclimatize at altitude. This sort of setback comes with every adventure. 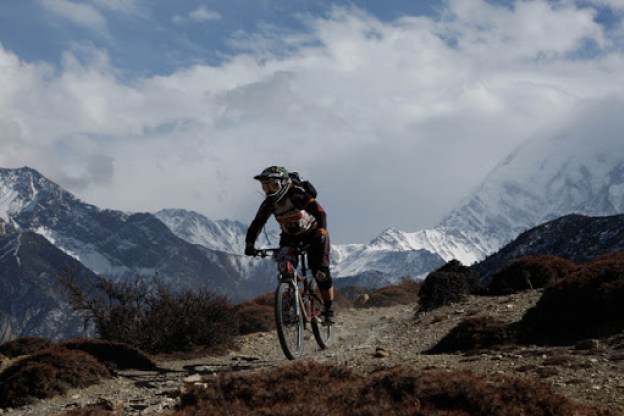 Sabrina Jonnier became the first woman to compete in an Urge event.

On planes large and small and buses of all description, our whole crew arrives safe and sound after 48 hours of travel.  All our thanks go to Cap Liberté, the organizator.

At Jomson (2720mètres of height), not far from the short runway nestled between mountains, the riders bustle to assemble their bikes. The first two days will serve as warm-up and as acclimatization before the ascent itself (1 and a half day) and naturally the descent. 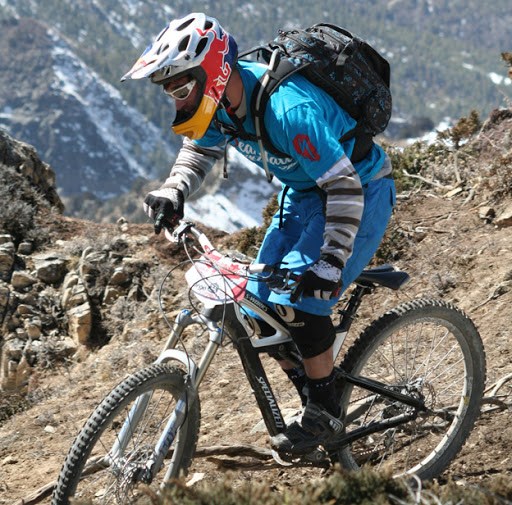 Last year at Urge Népal Darren Berrecloth was joined by Wade Simmons and Mark Weir from North America.  This year the Claw was the only native English speaker.  Darren chose a carbon Specialized Enduro for the event.

Tuesday is warm-up day which includes short rides and some exploring. The weather is pleasant aside from a strong wind blowing in the valley.  All arrive finally at Kagbeni (2800m) and discover a village of a rare beauty and a comfortable lodge which offers them food and board for this first evening at altitude. 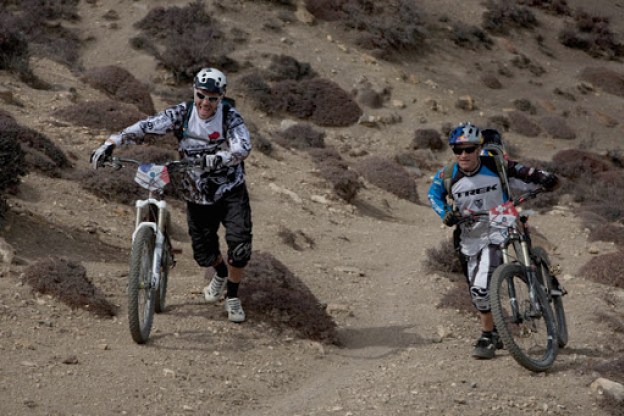 Walking the walk.  Fabien (left) and René Wildhaber push their bikes at altitude.

On Wednesday the crew rises early to take advantage completely of the beautiful day. This day is used as first test and as real acclimatization to the altitude (ascent and descent of a good pass to try to prevent altitude sickness that can strike anytime). 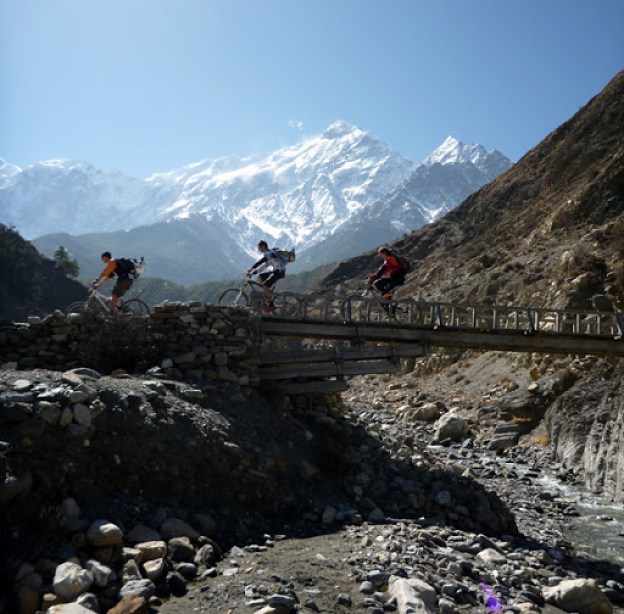 The Himalayas provide a stunning backdrop for a mountain bike event.

Just before leaving, the owner of the lodge – which also houses a centuries old Buddhist temple – is anxious to give each of us a blessed scarf to protect us during our trip. Everybody accepts gladly, almost religiously, humbled by so much kindness and attention. Everyone was willing to accept any help they could get. 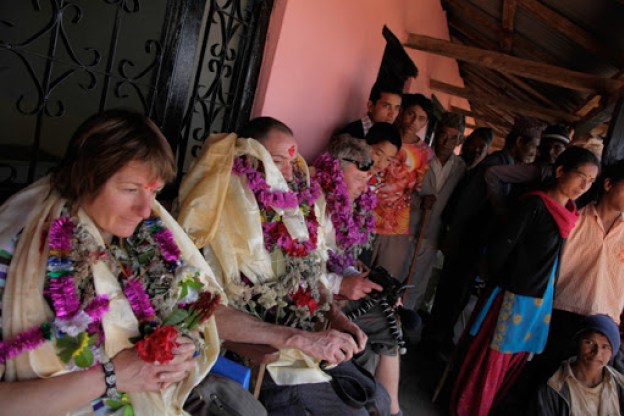 The riders being blessed before beginning their adventure.

Pilots and members of the staff are very careful during the ascent, which leads us to a pass at 3700 m (12,100′) and nobody tries to impress the other riders. During the descent the philosophy changes completely and talent takes over.  The speed that the riders reach is amazing.  Halfway we find our 3 riders (Vink, Balaud, Trocello) who finally join the group and are too happy to share a small battle of welcome. Unfortunately Nico Vink has to content himself with a loaner bike (like Mark Weir last year, his bike will never arrive to Nepal).

The most difficult part of the day was the return towards Marpha via Jomson buffetted by the strong head wind which blows every afternoon. Fortunately Marpha in itself is already a reward for all. Magnificent and harmonious architecture, this city appears to be a film set but it is very real. 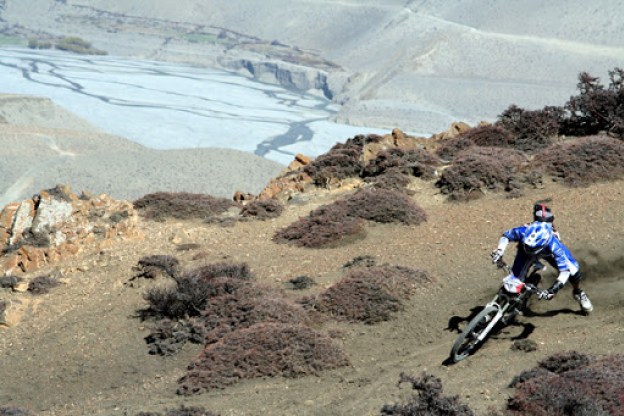 Vouilloz at the red line on the descent.  That looks like fun dirt.

We were lucky to spend another comfortable and pleasant night in the lodge. All take some rest before the next two days, underlined in red on the road book, the most intense and important day of the trip. On the menu for Thursday; an ascent from Marpha at 2670m finishing at 3600m approximately – where we will bivouac. The objectives of the day are twofold for the riders. Climb conservatively to save energy while hydrating as much as possible but also scrutinize every meter of the path because this would become the descent for the race on Friday. The favourites who eye the victory such as Vouilloz and Wildhaber already distance themselves. They look for the best lines and try to identify marks to prevent mistakes that may slow their descent.  It is a day made of 80 % climbing with the bike on shoulders and only 20% on the bike, but despite the difficulty the path seems promising and everybody want to ride it. 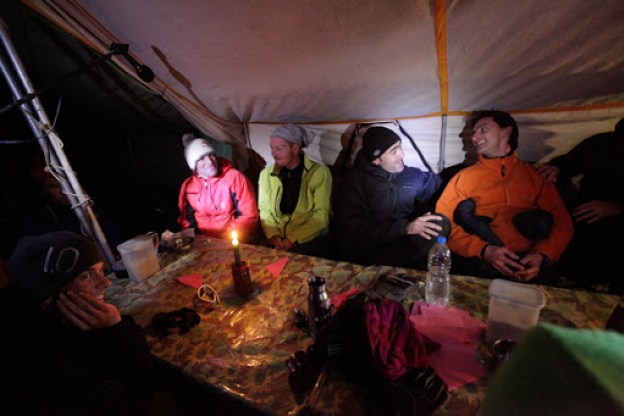 The riders were well cared for – even at their remote camp.  Great food and comfy beds made this adventure a little softer than Urge Kenya.

Taghendra, our chief local guide, built a 5-star bivouac under the watchful eyes of the peaks Tilicho and Nilgiri – each higher than 7000m. The setting is beautiful in this camp of luxury. All the riders are welcomed by a lemony tea, one of the local rites. Then a generous meal is served before they get settled in their tents on soft mattresses.  Too easy this Urge Nepal! 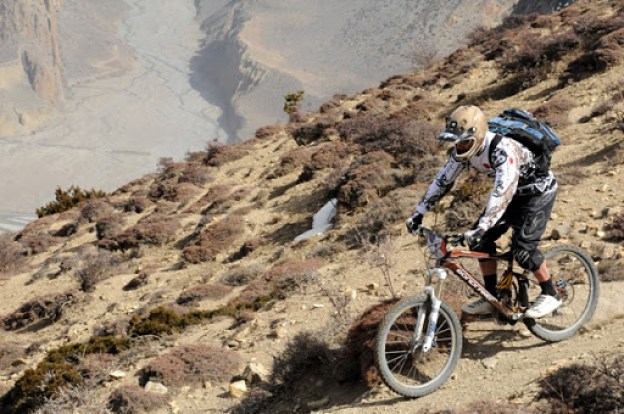 Fabien on the descent riding his Mondraker – a brand that hasn’t been made available in North America.

During the evening everyone sat around the table under a nice tent in a good mood, thanks to the guides and cooks who really surpassed themselves with a sublime meal of local flavours. The troops of downhillers are in good humour and one by one they leave the fire for the comfort of their tents. 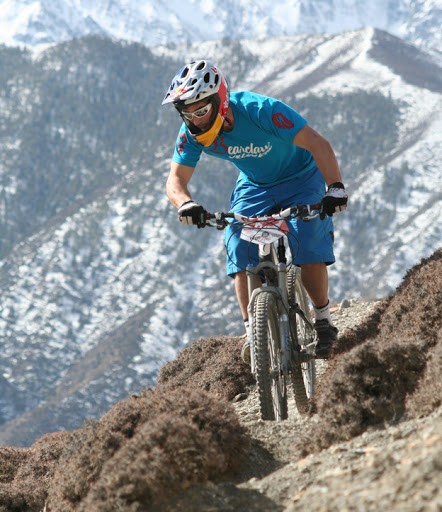 Despite the high morale the organization staff is worried. Snow fell in abundance in recent weeks right down to lower elevations. Will the race start at 5100m as initially planned? Nothing is certain, but the answer is will be known tomorrow and the mountain will make the final decision. 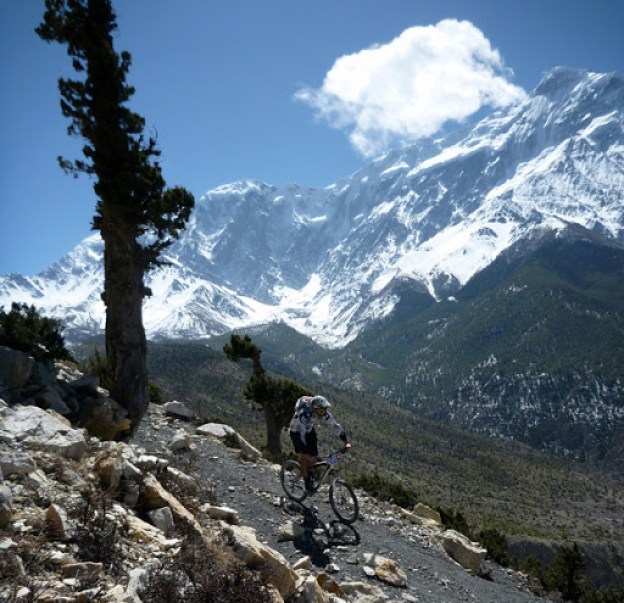 After a good tea or a warm coffee the crew departs with at 5 am with headlamps. The trail starts out hard with bikes on shoulders.  This doesn’t allow the riders to ease into the day but at least they get warm quickly. 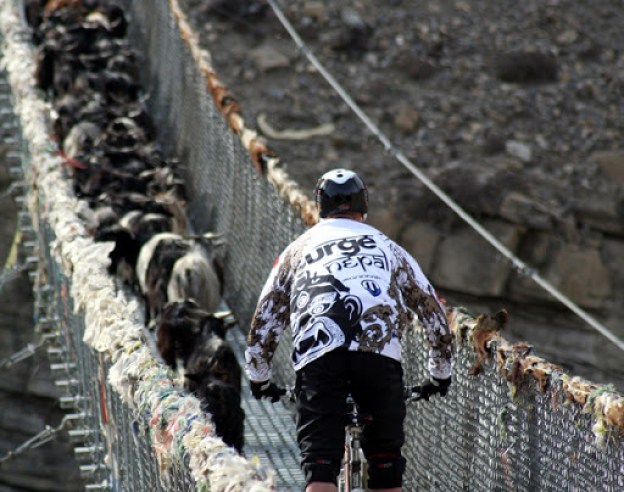 The organizers left early to deal with the snow.  On the planned route snow complicated matters above 4100m. Even if everyone managed to climb to the top descending by bike would be impossible.  Disappointed, but not beaten, the organizers plotted a new route on another flank of the mountain.  It appears to be a yak trail initially but it quickly deteriorates.  The slope is steep and the ciimbing becomes a painful ordeal.  The team reaches 4350m (14,000′), regretably short of the 5100m goal.  Quality over quantity becomes the mantra – the alternative being trudging through thigh deep snow while shouldering a bike.  The departure area is set with Dhaulagiri at 8172 meters looming above the riders. 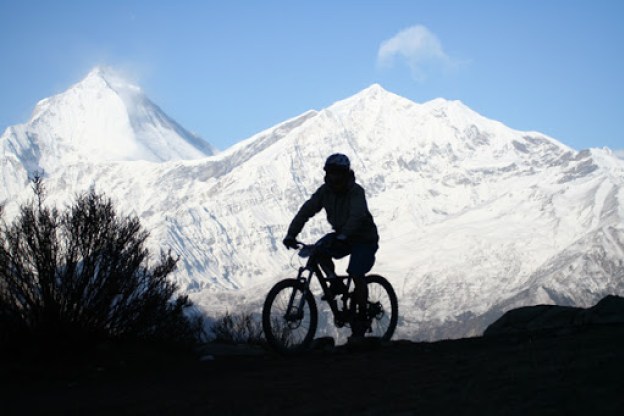 Berrecloth pauses to soak in the majesty.

A photo of the whole family and then it’s time for Fabien Barel to drop in at 11:45 am. Fabien wants to open the trail, which is not an advantage when you have no trace to follow and no prior recognition. But Fabien wants to be at the bottom when everybody will cross the finish line to welcome all the riders. He is already at the end of the Freeride part in less than 3 or 4 minutes, keeping the fastest lines under the eyes of the other pilots. Everybody’s warned; the level is very high. 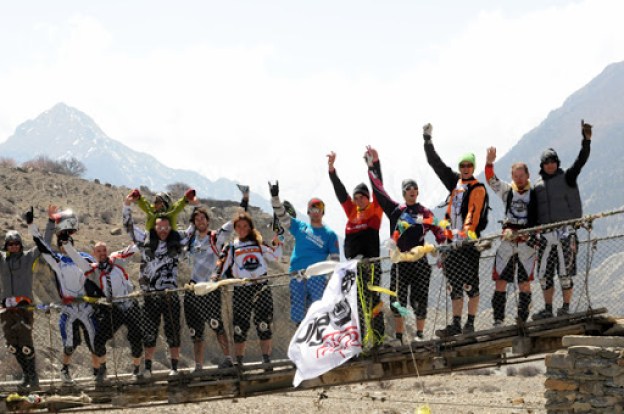 The battle is effectively going to rage between the 3 favorites (Barel, Vouilloz and Wildhaber) and the outsiders (Doucende, Balaud, Giordanengo and Peridy) who will take the start every 3 minutes, the order established by drawing lots. The run consists of 100% singletrack. Blessed with rare beauty and a rare intensity, many riders call it one of the best rides of their life – god knows they know a lot about riding.  This comment is very important for us. 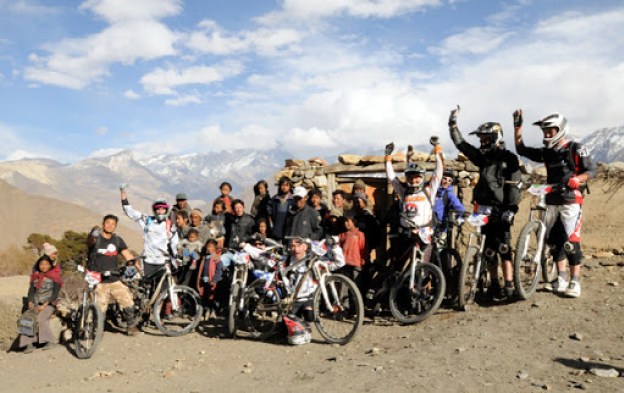 Another group shot highlighting the stark beauty of Nepal.

Fabien will take less than 30 minutes to reach the finish line. He will win this edition, admitting that he pushed his limits many times but “it was so amazing, so fun.” Nico Vouilloz takes the 2nd place. He is a little bit disappointed. He blames himself 2 or 3 errors of trajectory while accepting gladly his defeat today when faced with a superior performance. René Wildhaber takes the 3rd place. 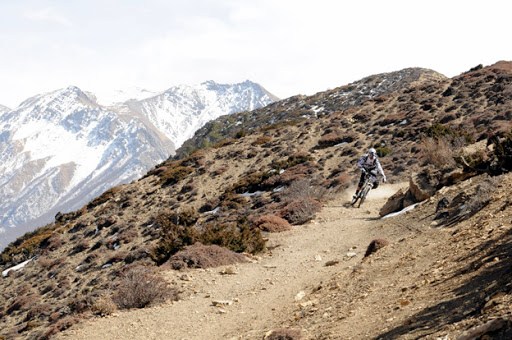 No one was surprised when Fabien took the day.

Maybe René would have finished higher if the trail had been more physical. But René is a gentleman, and he was not disappointed at all by the situation. On the contrary he was the first to warmly congratulate his counterparts.  Everyone makes it down despite Trocello’s flats and Peridy’s broken chain.

Nico Vouilloz is unaccustomed to finishing second – but he was gracious in defeat.

All in all things went very smoothly. All the riders recognized Sabrina’s strong performance, the first woman to take up the challenge, always with a smile.  The awards ceremoy takes place in Marpha later in the evening, within an atmosphere of brotherhood shared between organizers, guides and riders. Tribute was also paid to Sam Peridy, his wife Zara and their Nepalese son Tony. This family was the real inspiration for Urge Népal and this kid is a real hurricane of happiness. 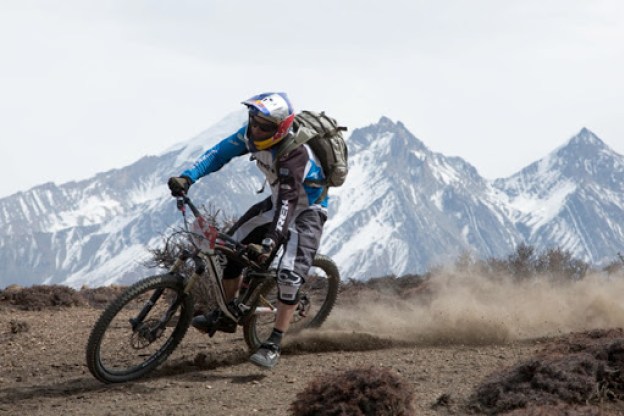 While the Urge Népal adventure ended on Saturday, March 6th after a magical, non-competitve 70 km ride and a memorable party, the humanitarian adventure continues through the auction sale we have organized.  The proceeds from these sales will go 100% to our friend Guillaume’s Children’s Home Association for Nepal and to the Tanguy mountain bike school.

The money will be used to build schools, to allow the Nepalese young people to ride mountain bikes and perhaps to develop a long-lasting job within the framework of their passion..

For more info on this event head over to urgenepal.com
To bid on the auction items and support the event’s humanitarian goals click here…

What do you think of this year’s Urge event?  Great to see another strong showing from Berrecloth.  I have to wonder what happened to Kumar?  I’d like to hear those stories.  Comment over here…