Tires On The Clock

Some of you might appreciate Cam McRae’s sense of humour when he asked me to do a review for him on the FreeLap System. Needless to say last time I used a FreeLap watch things didn’t turn so well (Editor’s note – Tim was involved in running a renegade DH race where there probably shouldn’t have been one.  He’s sorry, he’s repented so let’s move on.). Anyway, I’ve read a tonne of peoples’ comments regarding the FreeLap system, and its benefits for training, but I haven’t seen anyone use the FreeLap system for quantitatively measuring the impact of bike setup. 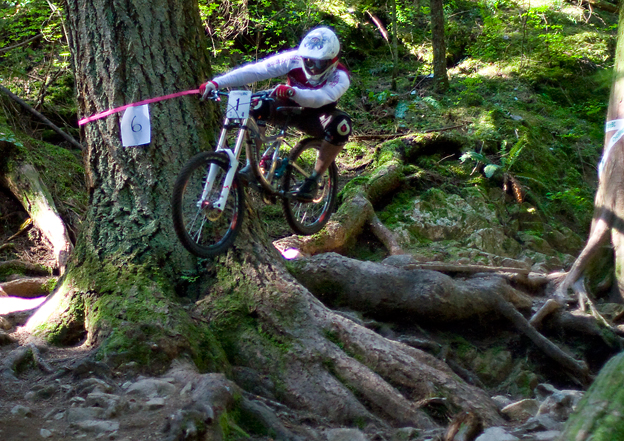 What I plan to bring to you dear reader is a series of articles regarding the impact of bike setup on time down a race course. These articles are naturally aimed at DH riding, but hopefully the average Joe rider can find my research useful. For those concerned I race in Elite on the local BC Cup circuit, and don’t represent a tire manufacturer, so I plan to keep my views as unbiased as possible. 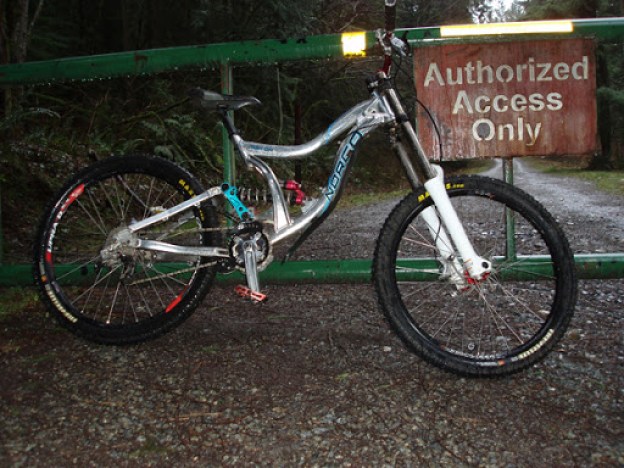 Test Plan
The weather was wet before I started so muddy conditions were the first test. I want to see if tires make a difference in time on the course. If there is a difference, how big is that difference, and naturally what is the best tire for the conditions. So I loaded up three sets of tires and headed out to the NSMB Technology Centre. The plan was to do 3 runs on each tire (all tires inflated to 26psig) down a set trail, and record the times for each run using the FreeLap system. The FreeLap system works by simply setting up a timing pole at the start and end of a section of trail that you wish to time. The watch then accurately measures the time it takes for you to move the watch from pole to pole. If you have more than 2 poles on the trail the watch will record your splits between poles as well. Very handy. 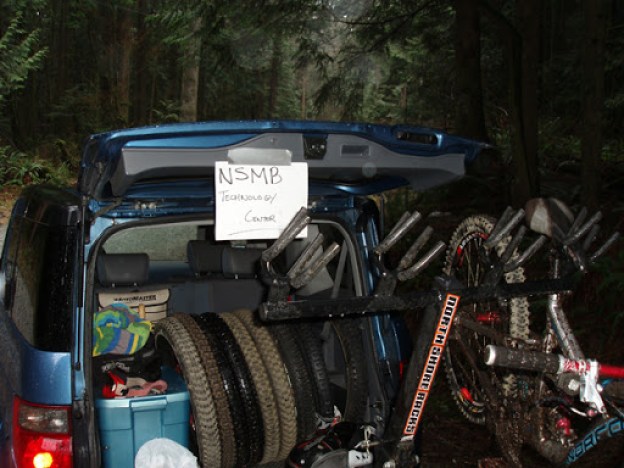 The nsmb tech centre goes on the road.

The Trail
The trail I intended to use at the NSMB Technology Centre is called Ray’s Fun Farm, and is a roughly 1 minute downhill track that was built for training over the winter months. Now before anyone gets all cranky, I checked with the trail builder before conducting my tests, and said builder was ok with me using “evil” mud spike tires on the trail. Conditions were wet. It wasn’t raining during testing, but the trail was water logged. Ray’s Fun Farm is a collection of tricky corners, runs on a relatively mellow grade, and is rather muddy when wet. 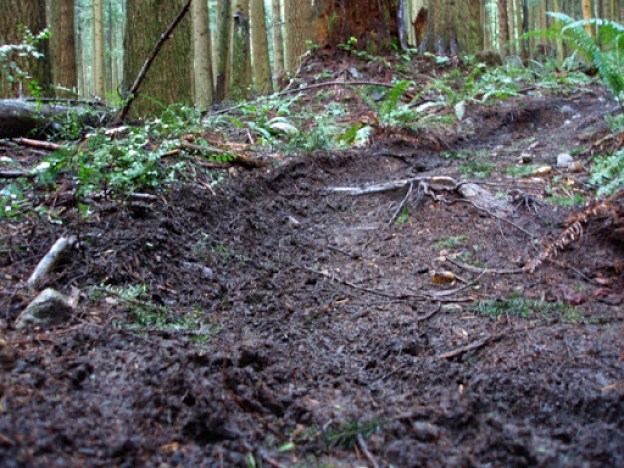 Ray’s Fun Farm is a mix of loamy corners like this one and nasty rooty sections like shown below. 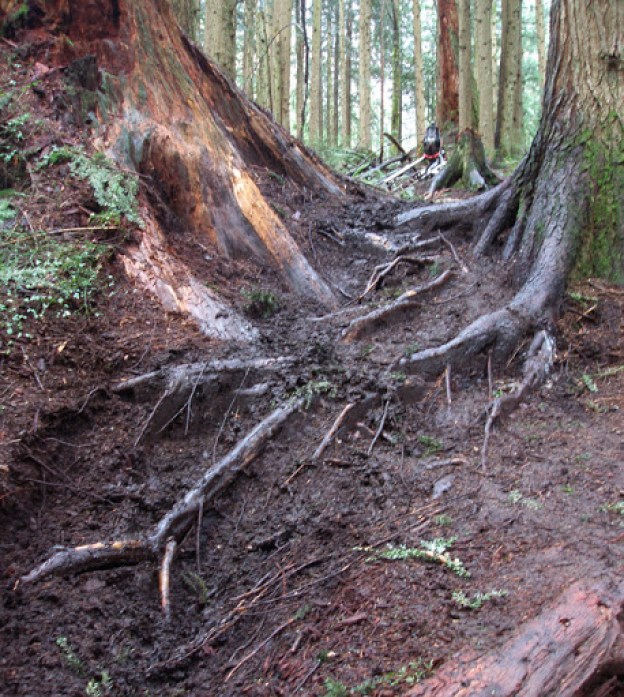 The mud spikes were very exciting through this section.

Tire #1 – 2.5” Maxxis High Roller 3C
The High Roller is my go to tire for most wet weather conditions here in Vancouver; however the mud on Ray’s Fun Farm was likely going to be too much for the trusty staple. The High Roller required the most effort to get a good time down the course since I was sliding into and around almost every corner. The High Roller provided moderate braking performance over the muddy ground, and offered up poor cornering grip in soft loose conditions. The reason for this was the knobs just could not penetrate into the soft ground far enough to get down to into dirt with some support. However the High Rollers excelled over the big slippery roots, where the soft 3C compound offered the best grip. The High Roller was the slowest tire in the test. My times are as follows:
-> Run 1: 1:07:50
-> Run 2: 1:05:13
-> Run 3: 1:06:00 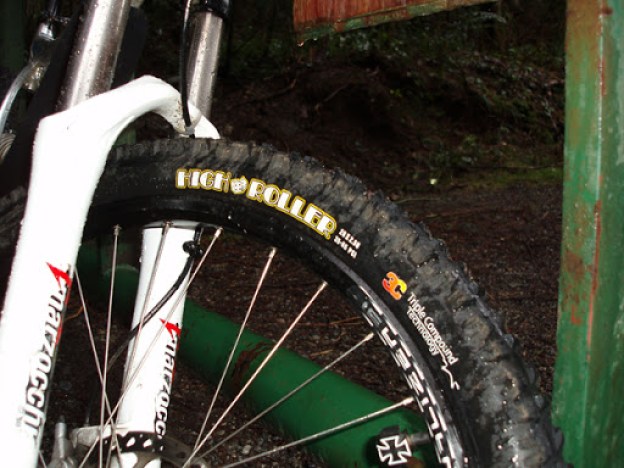 Maxxis High Roller 2.5″ 3C – The slowest tire of the three tires I tested in wet conditions

Tire #2 – 2.35” Kenda King of Traction DLR
The King of Traction was by far the most difficult tire to ride down Ray’s Fun Farm. The King of Traction was very nervous over the large roots, and rocks; in these sections I had to ride far slower than the other two tires. However where the ground was soft the corner speed I could hold was gob smacking. I was charging into corners like it was dry, the spikes hooked up with no hint of sliding, and as a result exited the corners with good speed. It did take two runs to find out where I could push the spikes, and where to hold back, but I managed to put together a good run, which turned out to be my quickest run of the day. My run times on the King of Traction are as follows:
-> Run 1: 1:06:50
-> Run 2: 1:05:74
-> Run 3: 1:02:97 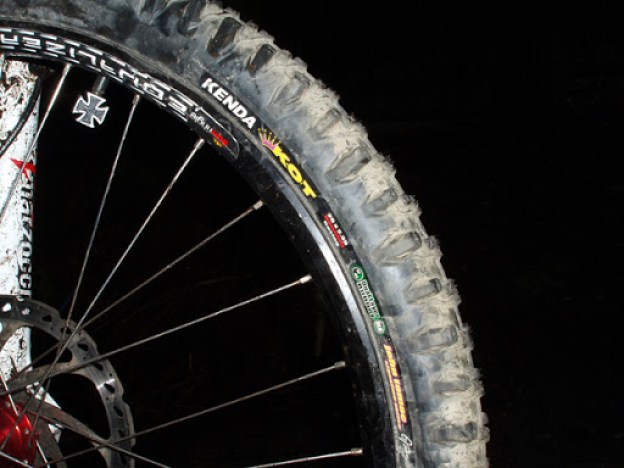 Kenda King of Traction 2.35″ DLR – The fastest tire of the three tires I tested

Tire #3 – 2.4” Kenda Telonix Stick-E
The Telonix was my favourite tire of the day. It was the easiest to ride, in that it was the most predictable, and the consistency in my times is proof. I thought the Telonix was going to clog up with mud, but the knobs cleared well, and the tire offered good braking and cornering grip. Although I felt the fastest on the Telonix the times didn’t show it. I think this is because although I was entering corners with the same speed as the King of Traction I was drifting ever so slightly in the corner with the Telonix and scrubbing exit speed. Also I was only able to get two runs in on the Telonix before I lost daylight, and with a third run I might have come closer to my best time set on the King of Traction. My times on the Telonix are as follows:
-> Run 1: 1:04:36
-> Run 2: 1:04:06 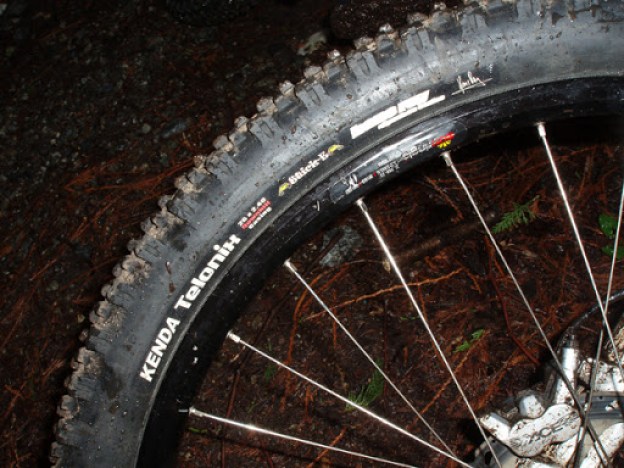 Kenda Telonix 2.4″ Stick-E – My favourite of the three tires for wet conditions.

Conclusion
The first observation is that there is certainly time on be made on the track by selecting the correct tire. However I’m surprised that the times weren’t further apart. Based on my experience I would have thought the gap in time between the High Rollers and the other two tires would have been larger. Trying a variety of tires and figuring out where each tire is strong and poor will make you better rider, and a better racer. Being able to utilize a tool like FreeLap is invaluable for determining what is actually faster, and what just feels better. Keep checking back over the next few weeks for further bike set up testing!

What do you think about Tim getting all scientific with his tire selection?  Tried these tires?  Agree with his findings?