The first time I met Simon, he was out digging on a local trail to turn it into a bit of a training run for DH.  Needless to say, there was some controversy; however the end result is a pretty fun little rip that the majority of riders seem to enjoy.  (for those who are going to ask, yes he did ask the original trail builder about re-building the trail…)

Simon is a Comox Valley local, who at age 19 is one of our country’s top racers and World Cup prospects.  Something to keep in mind, Simon is pretty much a total privateer.  Starting work at age 8, bagging fertilizer, he saved up enough money to buy his first bike at the age of 10, and he still buys all of his bikes.  Simon also builds trails and has put time into the ‘Dodge City Downhill’ (DCDH) in Cumberland and Monster Mile at Mt. Washington.  Simon has also spent time building and riding dirt jumps in his back yard and even had a pump track at home.  Now entering his first full year on the World Cup DH circuit, I caught up with him at home for a quick interview to see what he thought about last year and his plans were for 2010.

Andrew Gower – When did you start seriously racing downhill? When did you first consider yourself a downhill racer?

Simon – I started racing when I was 13 (2004), and I sucked.  Eventually I got better, and the first time I won a (BC Cup) race was in 2006.  That was when I first realized I could win.  Everyone is always trying to win, and I was pretty much always around the top 5, but winning is different.  It’s that feeling; it wants to make you keep winning.  I started getting good in 2006 because I improved my riding – I started riding a bit with Steve Smith the year before, who is super knarly.  I would ride behind him and he would tell me what’s up.  The biggest thing is that he never pedals but he is still super fast.  So I would try to ride like him. 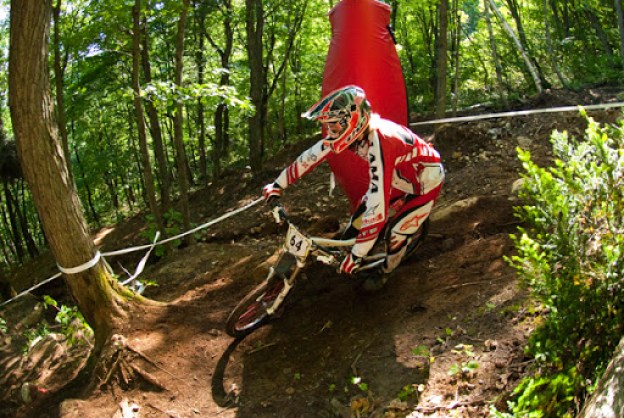 Last year was your rookie year on the World Cup DH circuit, what races did you do?

What was your best race last year?

I would say my best race was the National Champ’s at Massif du Sud.  It’s in the middle of nowhere but it was a sick time.  Why was it my best race?  Well, because the weekend before I had a good race, and because of that I knew I had the potential to win.  When you come into a race and you know you have the potential to win as opposed to knowing you will get, say a top five, well that gets you motivated.  Knowing that it is possible to win pushes you that much harder and that’s the reason why I ended up second.  Obviously I didn’t win, but if I didn’t feel that potential I wouldn’t have had such a good result.

My worst race?  Probably Arduum challenge.  I was sucking on the course, it has these super tight corners.  Ya, I was sucking big time on the course.  It’s hard just to ride down and get a flow.  And then it rained right before the final, and I didn’t focus at all on my run, which for me personally isn’t the best way to race and basically I lost the race before I started and then I made some mistakes early on in my run.  It was bad and the way I rode was bad, but my doing that made me kind of give myself a kick in the ass not to repeat that.  So, it was bad and then good. 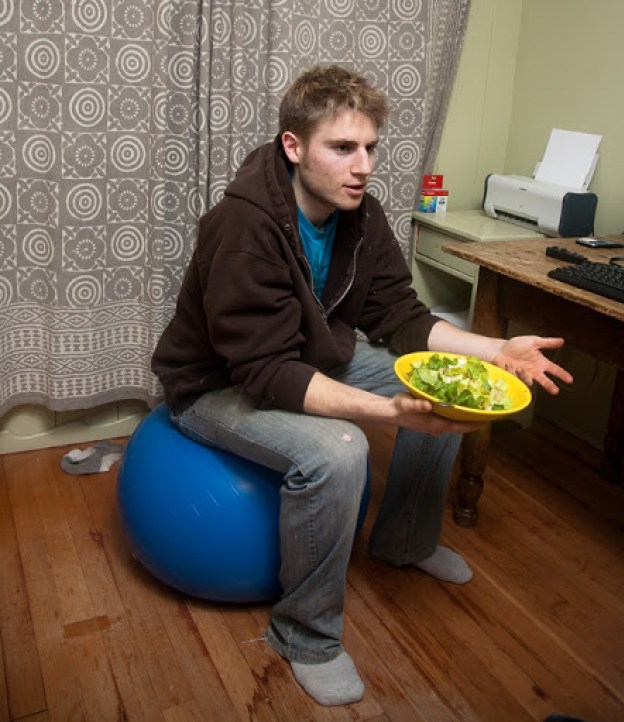 You were in Canberra when Steve Peat won the World Championships, what was your impression of that?  You witnessed history.

It was pretty insane, to be honest.  I did my run and then I watched the final riders.  He, Steve, destroyed the top sections – the first two out of three splits.  The last bit, which is all pedally – it was pretty crazy and emotional.

What did you think of the course?

It was actually pretty good, I am sure many people have heard the courses bad rep cause it is flat.  The first two splits are actually really technical. It was pretty flat but you are still turning and you’re busy the whole time – there’s no straight sections.  You are always turning – it’s intense basically.

So it’s actually really good and I learned a lot from it just because you really have to be perfect with your lines and not lose speed anywhere. 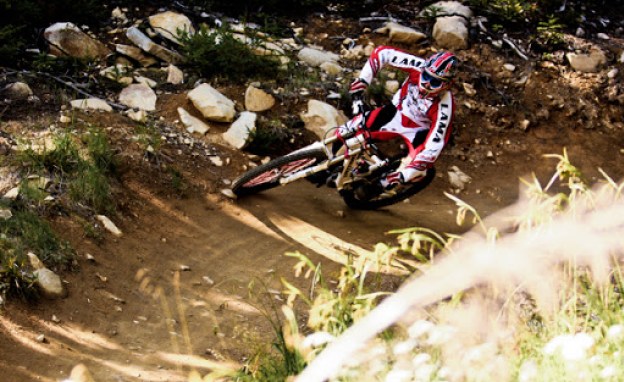 What is the biggest thing you learned last year?

Well, I learned how to race well – to reach your full potential when you race.  The biggest thing I learned, or relearned is how I race well and how I need to prepare for a race. So I don’t suck balls.  (He says with a chuckle)

I definitely need to stay focused – intensely focused or I just can’t ride my bike.  After I didn’t qualify for Bromont we went up and watched as the top guys prepared for their final, and I saw Steve (Smith) and he was about to go for his run and he’s like “Hey Simon, how’s it going, what’s up?” and I’m saying “Dude, you’ve got to race, like, what are you doing?” and Steve’s like, “If I focus to much, I get too serious and crash”.  It’s totally different for everyone.  Guys like say Fabien are doing their little, dance – well, it’s not like a dance (more chucking) but he’s super in the zone which is really cool to see. 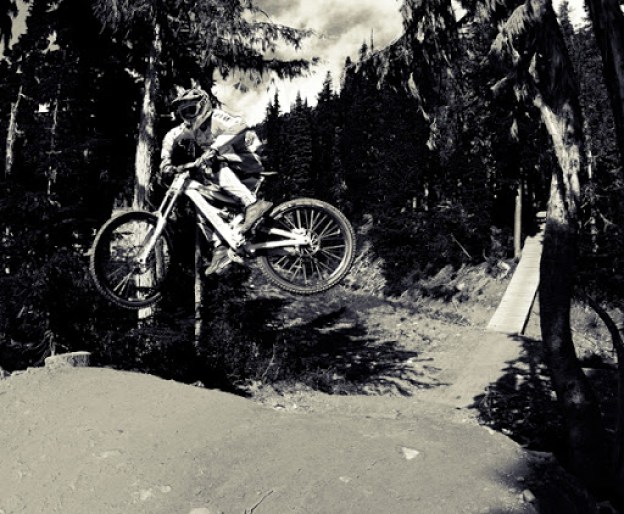 Being physically fit, that’s huge.  If you’re not fit in your race run, then it’s a lot easier to lose focus mentally.  The physical totally benefits the mental.  Being fit, and basically making sure I have enough funds to do which races I want to do.   So that half way through the season I’m not stuck.

I’ve also been making some downhill trails.  Some low elevation, shuttleable with good gradient and world cup simulating.  Something that will put me out of my comfort zone.  Whatever I feel like I am weak at so I can get better.  I just made this trail that is super steep, but still wide and you are cornering all the time.  It’s so steep, that you are always wondering “how much can I let off the brakes?” which is serious shit. 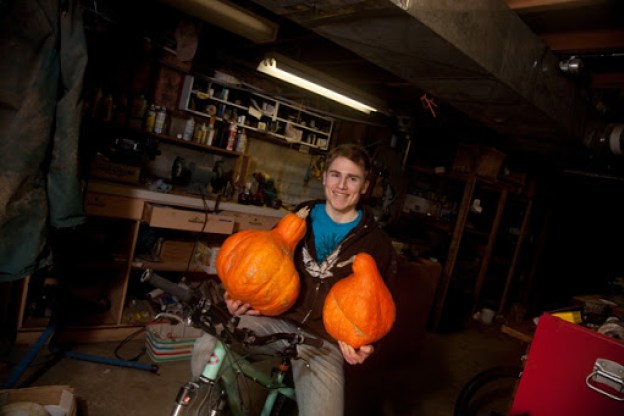 And let’s not forget about the importance of the pumkin (or squash) in a dh rider’s diet.  photo ~ Gordon Ross

The reason I wanted to make that is because last year (2008), at the world champs in Italy I saw the course and I shitted my pants because the course is super steep, super wide, super gnarly, super wet, super rocky and rooty and all I could think was “Holy shit balls!”  But then I saw some of the top guys go down and it didn’t bother them for shit, which didn’t really help me but that was the first day and it was really wet.  The next day it dried up and I watched them go and they were ridiculously fast, which helped as you got to see what is possible.  I find I can ride a section better if I see one of the top riders go through; like watching Brendan Fairclough, he goes through the hairiest section and makes it look totally smooth. 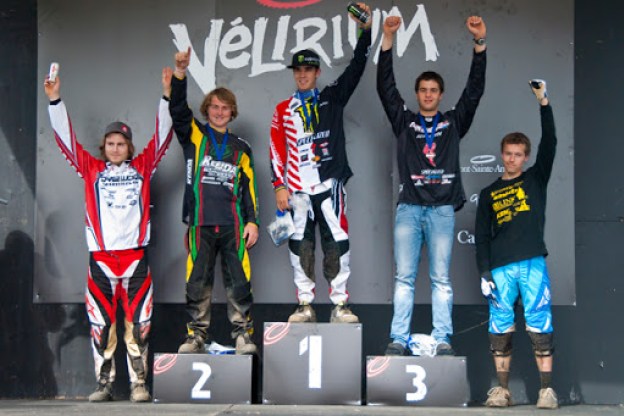 Any time you share a podium with Sam Hill you’ve got to be pleased.  Simon reaches for the sky – far left. Photo ~ Sebastien Desbordes

So now that you have a sponsor lined up, what are your plans the season?

I made a plan which I think I can do.  I will do some races in the spring on Vancouver Island and Port Angeles area and then the US Open, Fort William, Shladming, National Champs (in Panorama), Champrey, Val Di Sol, Crank Works, World Champs and Mt St Anne. This may seem like a busy schedule but actually there are some good gaps in between so I can rest at home and recover.  Those flights are long.

Its’ going to be nice to have Nationals in Panorama – in your home province. 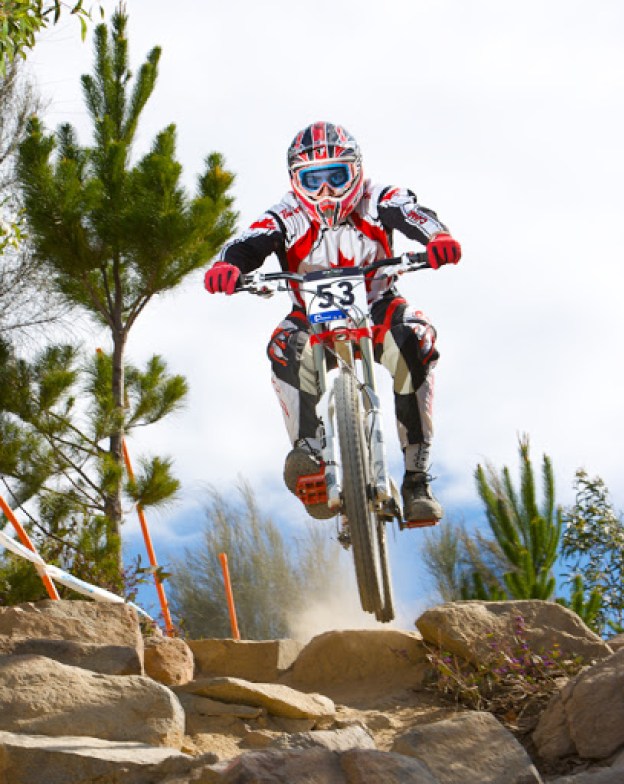 Simon racing at the World Championships in Canberra Australia in 2009. Photo ~ Derek Waterman

And world champs, are in our country and you’ve ridden that course haven’t you?

Ya – a few times.  It’s definitely one of my favourite courses.  That’s like the biggest race for me for sure.

We know your plans, what are your goals – what do you hope to achieve?

Well, I don’t want to sound too arrogant – for the national champs I would like to I think there is a good possibility of me being able to win.

You only have to move up one place.

Well, it’s another year, and everybody’s fast, it’s not like it’s easy. 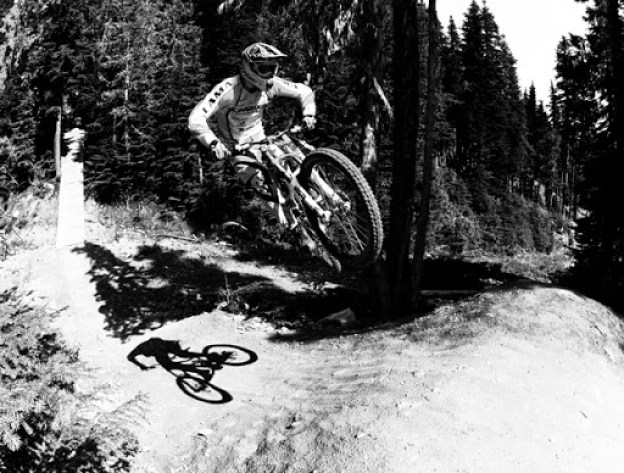 So – do you want get top ten in some world cup races?

Top ten? (ha ha) Well, who doesn’t?  That would be totally a bad lesson in goal setting.  If you ever want to crush your hopes and dreams, just set your goals too high.

So – what are your goals then?  It doesn’t sound like you are being too arrogant?

I would say for the world cups, just from what I’ve seen – when you come into a world cup, you see where you are in terms of speed and where you are in terms of your skills and the only thing that matters is your end result; not how fast you can ride in practice.  Everybody at a world cup is fast in practice and in the race everybody is fast but, to be honest a lot of guys crash – so the only thing that really matters is your end result and I want to make sure I have a good end result.

Check out Simon getting his berm on at Mt. Washington

Wrapping Up
I know, I know, that was a little more than 11 questions – but that’s how interviews go sometimes.  I started with 11, but more appeared.  Anyway, stay tuned to the World Cup web-casts this season, and you might catch a glimpse of this BC local as he takes it out on the road in the big leagues for 2010.

Have you raced or ridden with Simon?  Anything to say?  Lay it down here…