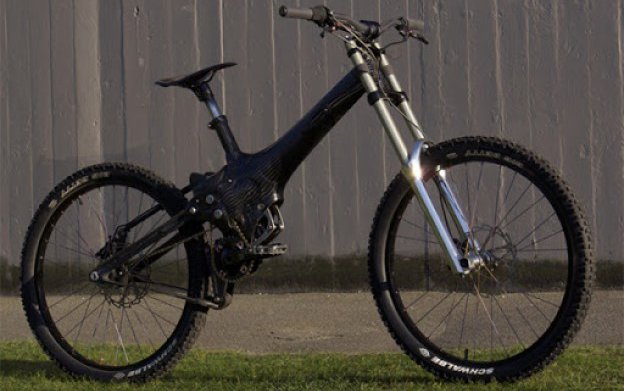 I’ve been riding bikes off road for a quarter century now, and have always been a tech geek at heart.  I’m intrigued by alternative and innovative design, pioneering technology and purveyors of the unique; people with neat ideas and the ability to transform bits of metal into functional works of kinetic art. Whether cobbled together out of scraps or elegantly fillet brazed and ornately lugged, I love many forms of two wheeled creativity. Consequently my bike choices tend to be on the esoteric side. 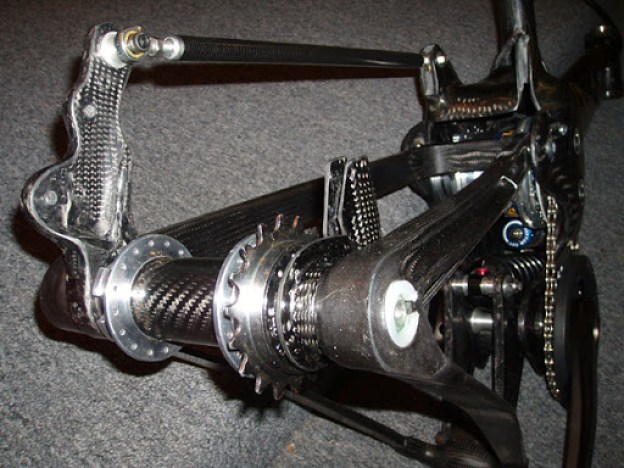 Carbon, carbon, everywhere. Fresh out of the box. The build kit came with cranks, integrated bb and headset, chains, chain tensioner, Rohloff gearhub & shifter, hubs and freewheel. Lots of neat bits in there. The hours put into these kits must have been huge. Proprietary hub runs a bmx freewheel.

Lahar has been on my radar since ’02, when I saw an early version at Whistler under a visiting Kiwi. I was immediately entranced. It had a gearbox. It was carbon. It was freakishly alien. It pushed all my buttons and I wanted one. Alas, information was nonexistent, and I wrote them off as unnatainable. Fast forward to 2006. A new design was launched – the M9 (the 9th dh iteration), as well as a website, thus suggestions of a tangible production based company. 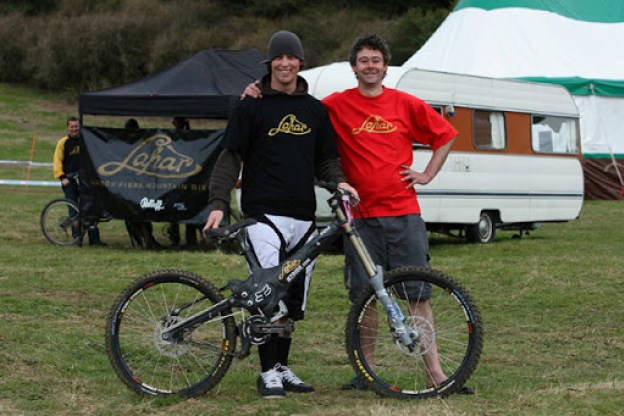 Aaron Franklin w/ Cam Cole at the 2006 Rotorua worlds. Note the posh factory rig & pit. He was justifiably stoked to beat a gaggle of factory teams with what amounted to a one man in a garage effort.

The new frame was significantly more refined than previous versions, and it grew on me. I dug up a bit of information regarding the pedigree of these bikes that went a long way towards dispelling my initial concerns of viability as a competent dh bike. The earlier versions were holding up to several seasons of pro abuse, and junior Kiwi ripper Cameron Cole was riding the new bike for the ’06 season (he went on to win the Junior Worlds at Rotorua). It seemed to be a capable and bomber chassis. A flurry of email exchanges with owner / designer / sole employee Aaron Franklin further assuaged my fears, and lust for the exotic overwhelmed caution and I fired off a deposit. And waited. A few months, and a fat bank transfer later, a nondescript package from NZ had arrived on my doorstep – M9 #007. 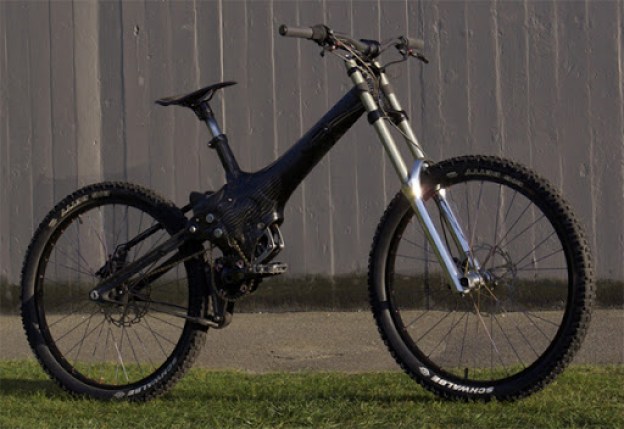 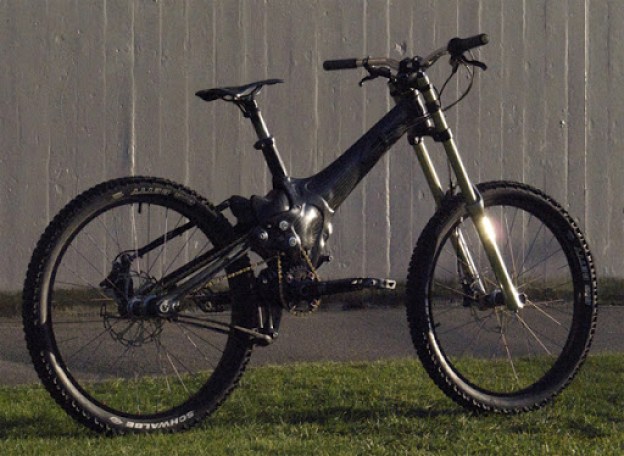 On to the ride. Despite its unorthodox appearance it still feels like a (somewhat) conventional dh bike. It’s long & slack. 64 degree head angle with slammed Boxxer / 14.25″ BB / 18″ chainstays,  and 47 1/4″ wheelbase. Travel is 9″ – super supple off the top, with a nice mid stroke ramp to a non-perceptible bottom. The result is a bike that’s ridiculously stable and plush – in my hands impossible to get out of shape at speed. The best chunder leveling bike I’ve ridden (surpassing even my old V10). Definitely something to be said about high pivot designs. It does however like to stay stuck to the ground and is relatively tough to manual and bunnyhop. Not as playful a setup as some bikes I’ve had, but definitely efficient at getting down the mountain. There’s no perceptible suspension / drivetrain interaction, so suspension is always active. With the bb slightly higher than what’s currently in vogue this bike excells at pedalling through the rough.  It does however exhibit less anti-squat than some of the current vpp-esque designs, so it wallows a bit when you hammer on the pedals. Tight drivetrain (no chainslap) and non-resonant material makes for a quiet ride.

Riding with the rohloff gearhub is an easy enough adaptation. I was inntially sceptical of the grip shifter, but it turned out to be effective and foolproof. I run it inboard so only my thumb is on it; feels natural and never miss-shifts. Multiple gear dumps are quick and effortless, and instantly engage regardless if you’re pedalling or not. Great for pre-selecting corner exit / slower section gearing; you never get stuck trying to grind out a too tall gear. 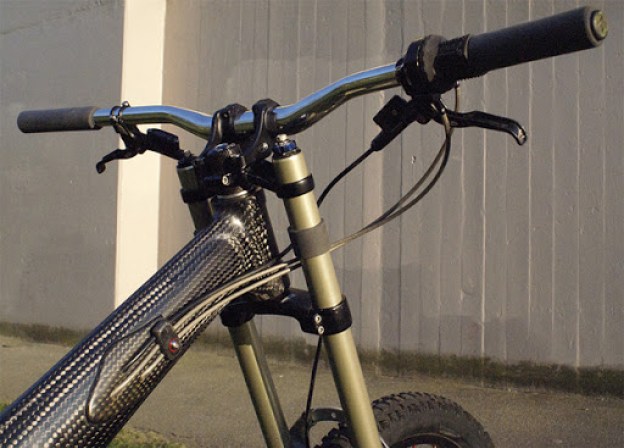 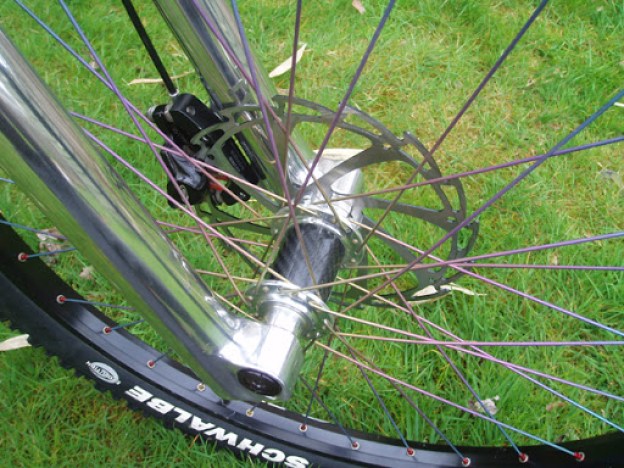 Lower front bits: ’06 Boxxer WC. A reliable old workhorse. Stripped and polished. I despise most labels and graphics, so whatever can be peeled gets gone in short order. Though pretty, keeping bare magnesium shiny is a pain in the ass, so I’d advise against it. Stickers and paint are weighty though! Carbon shelled hub by Fisher (another Kiwi micro builder) is light (166g) and sexy. Marwi ti-dye titanium spokes and aluminum nipples add additional lightness and festive color. Both have been surprisingly durable – I’ve run them on dh bikes for years. Rhyno Lite rims are an old favourite of mine – disposable cheap and decently light & burly. The Schwalbe Big Bettys are a great all-round tire, though a bit light for aggro use. I’ve since swapped to ghetto tubeless Michelin c24’s. 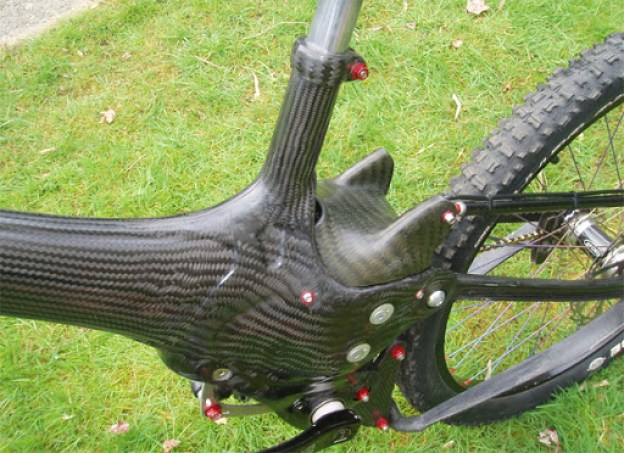 It’s got wings! Vaguely reminiscent of the tailfins of a ’53 Cadillac, the gearbox cover doubles as a floating brake mount. The right wing seems to exist purely for aesthetic symmetry. Bedazzled with ti and aluminum hardware. 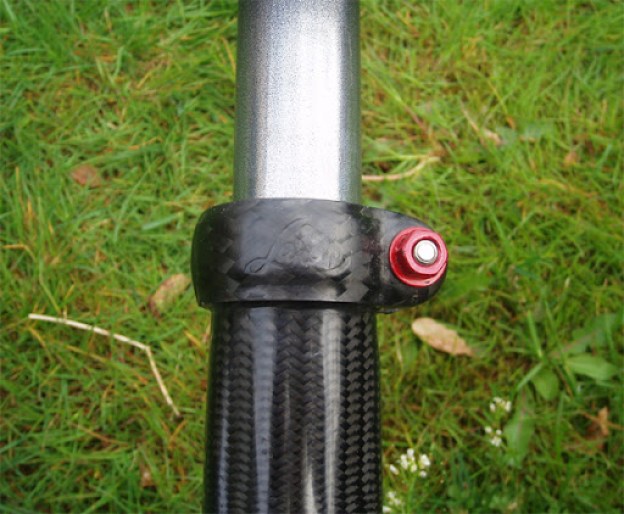 Squint and you can make out the Lahar logo embossed in the seatpost clamp. Raceface post has been appropriately de-logoed. 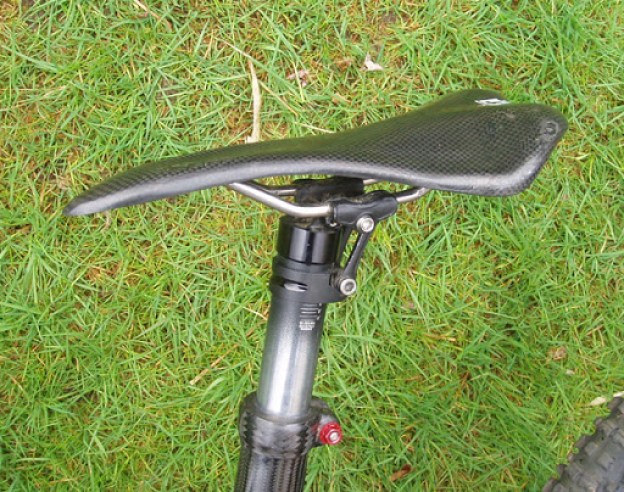 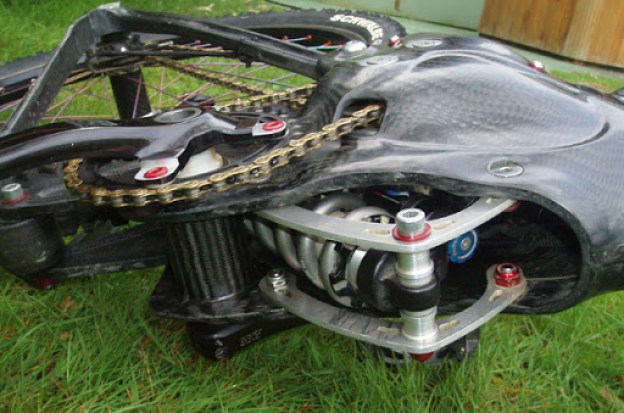 Like the headset, the BB consists of standard bearings set directly into the frame. Plastic spacers are inserted into the bearings and the crank axle slides through. Light, simple and durable. Front shock mounts have two positions to tweak angles. 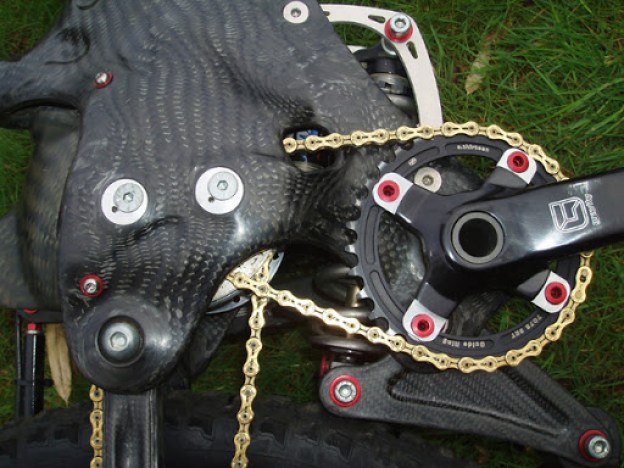 Driveside. Standard gravity light cranks, e13 ring, alloy bolts and cheesy gold x9sl chains. Mass centralization and low center of gravity were high on the list of design priorities. The heavy bits (gearhub and shock) are stacked low as possible over the cranks. The result is a bike that’s surprisingly nimble and flickable despite its length and slack geometry. 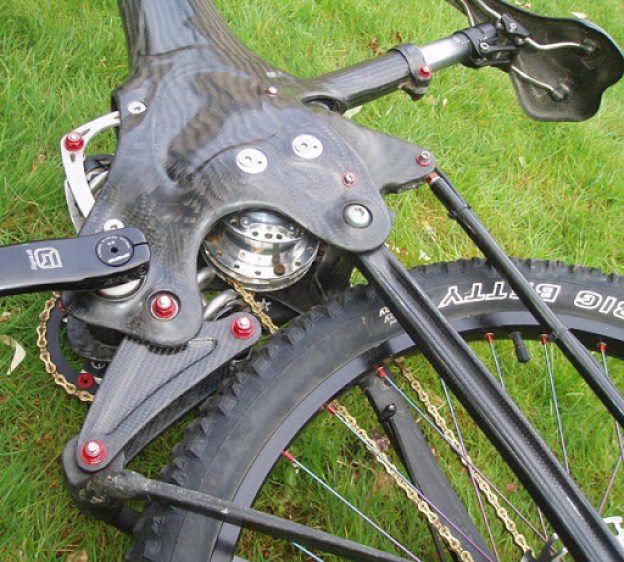 The swing link hangs a bit low so it’s seen a few impacts. It swings up under sag, so this isn’t a regular occurence. Occasionally noticable, but not detrimental. 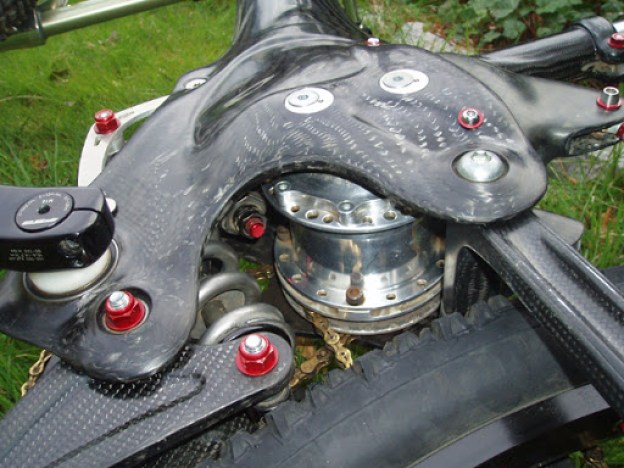 The guts. A standard Rohloff 14spd hub with custom mounting flanges and an output gear carrier (a standard granny ring) bolted to the spoke flange. It’s a weighty thing, but the hub is bombproof and should have no problem lasting the lifetime of the bike. Scheduled maintenance is an annual oil change, and because gear indexing is at the hub rather than shifter, gear changes are always flawless regardless of cable stretch or contamination – no adjustments required. Apart from oiling the chain, I only touch the drivetrain (hub oil change and cable swap) once a year. And yes, I feel shame for not replacing those rusty steel bolts with ti. 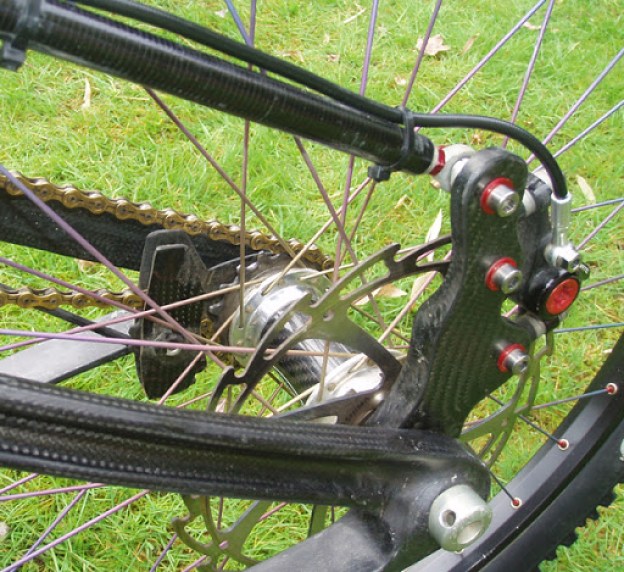 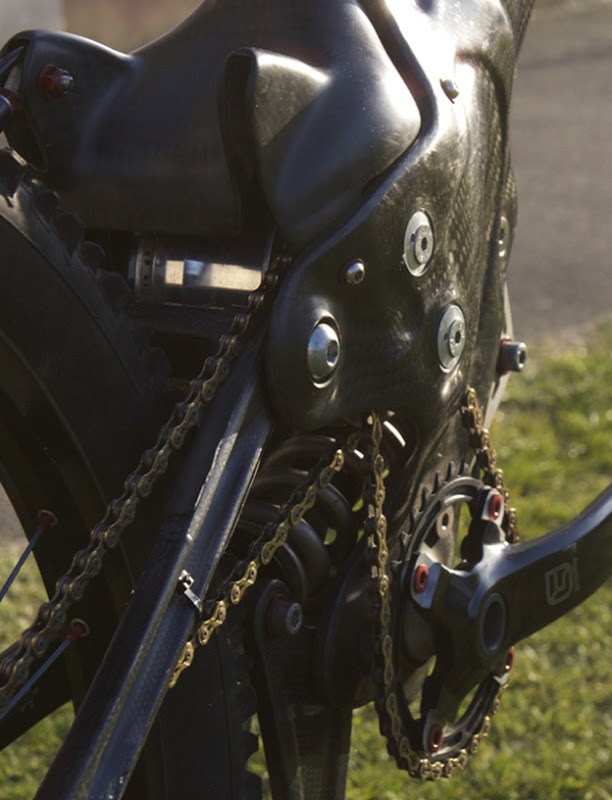 Boutique bikes can have positive and negative attributes. I’ve owned a few over the years and I’ve had a range of experiences. In several instances I’ve had opportunity to talk with guy that designed and/or built my bike (typically the same person) which is really neat – passionate and talented individuals. On the flip side, longterm product support can be uncertain. Unfortunately Aaron ran into business difficulties; after an M9 production run of less that 20 units, he disappeared into the ether. Fortunately the bike is holding up well after 3 seasons, but if something grenades, I’m on my own. Such is the price of excusivity. Regardless, it’s been a brilliant ride that’s served me well – I love the thing. And when the bike finally gets retired it’ll make fine sculpture.

DH bikes don’t get more exotic than this.  Forget Ferrari or Lambo – the Lahar M9 is Mclaren F1 exotic.  Are you lusting for one of the X-teen remaining M9 frames?  Too much for you?  Pipe up here…

One of the greatest lahar stories never told was how Cam Cole's world championship winning run on one was nearly derailed by a puncture on the start line. If you ever worked on one, you'll know that swapping a wheel was not fast. Matt Keen, the head NZ DH mechanic at that worlds (2006) noticed a slow puncture in Cam's wheel while Cam was on the rollers at the top of course, minutes from start.

No fuss at all, Matt managed to get the wheel out, a new tube in and have it ready to win a Rainbow Jersey in just a few minutes. It was legendary wrenching of the highest order.

never heard that one. but yeah - trying to skew the wheel, floating brake & tensioner with the axle is a proper juggling act.

Perry, do you still have the Lahar?  If so are you still riding it?

yes. and no, currently. tho the frame is still intact, various bits hanging off it are in need of a refresh.