Life Cycles…
We have filmed and explored the vast variety of elements this wonderful sport is built upon. Derek and Ryan have taken the foundation of the sport and over the course of two years, slowly chipped away the layers exposing the unseen intricacies and dynamics that often go unnoticed.  It’s been a learning experience.  Throughout the project I worked to cover as many aspects of riding as possible, except one. This was soon to be remedied. 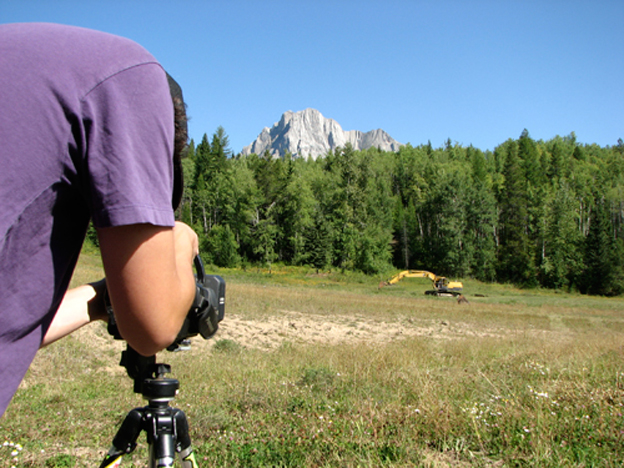 The one feature that eluded my contribution to the project was an air shot. Not just another jump; a definitive move that would make a head or two turn.  As the project wore on the possibility of putting together this shoot was slowly beginning to deflate.  We were well into August, schedules were becoming difficult to work around and, needless to say, land owners find it hard to smile at the prospect of having a stranger show up on their front porch requesting to uproot their yard.  For reasons unknown to me the potential beneficiaries couldn’t quite grasp this concept of hosting a cinematic venue. 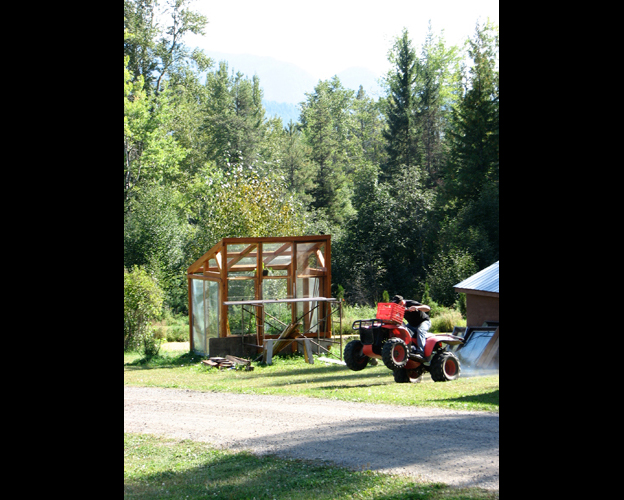 These are the struggles I dealt with for two straight seasons until one fateful afternoon my luck casually sauntered it’s way back into my life and I was introduced to one of the more interesting, motivated, resourceful, and most of all, open minded individuals I have had the pleasure of sharing an airplane hanger with.  That’s right, this is an honest statement.  The many super-sized characteristics that make up this intriguing personality are naturally accompanied by the numerous stimulating gadgets that would keep any active intellectual entertained; motorized skateboards, dirt bikes, snowmobiles, excavators, water tankers, petrol injected remote control helicopters and of course, a full sized vessel that we commonly refer to as an airplane. 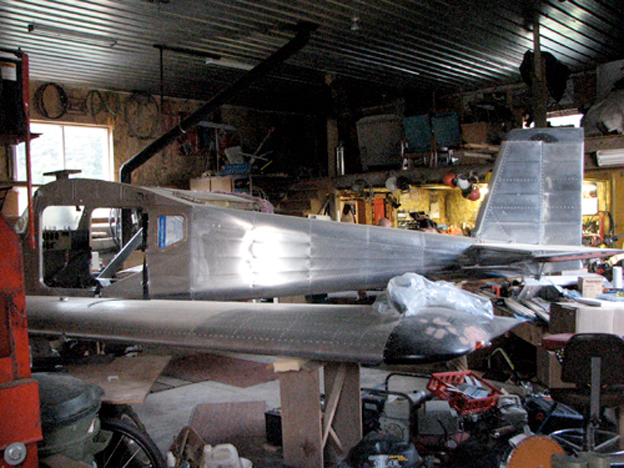 Buying a plane is one thing, but having the drive to construct one of these metallic birds from the ground up, is entirely another.  That is precisely what greeted us upon entering the hangar; a 2/3 complete kit plane that Rick aims to have up and aloft by next summer.  Rick and Shirley Mercier not only own all the toys, a viciously friendly guard dog named Joker (who despite his appearance is about as warm hearted as a Care Bear on Valentines Day), and runway for a backyard, they also hold the key to one of the most impressive backdrops of any location I have ever seen. 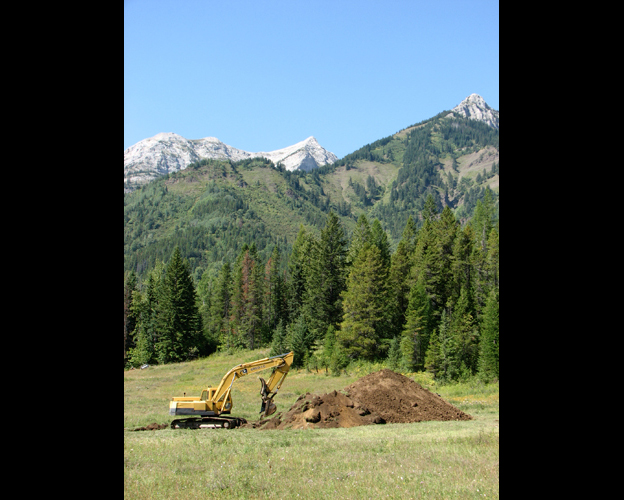 After a brief negotiation, Rick concluded that it would be nothing short of preposterous to have a shoot of this nature take place anywhere other than his natural playground of a backyard.  Like any and all playgrounds, this huge sandbox would be useless and uneventful without the nesscary tools needed to entertain.  Naturally, without hesitation, Rick worked not only his excavating expertise into the mix, but his machine as-well.  With the ingredients in place the show was on. 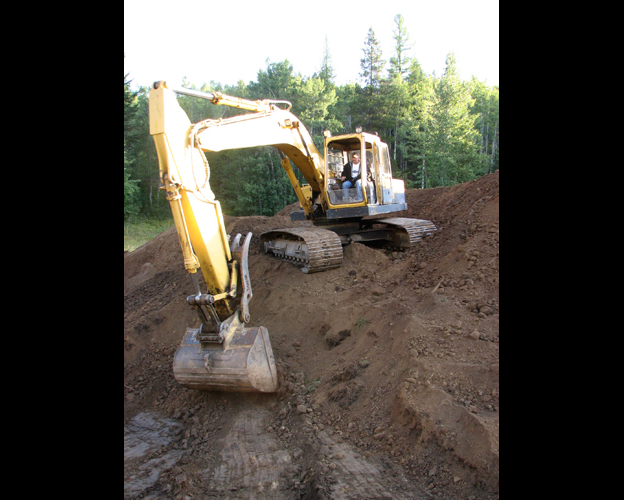 Four diesel combusting, hydraulic sifting, Monster induced, earth inverting, camera rolling, time-lapsing, pore expanding, lip tweaking, landing altering, crash testing days later, we felt we had successfully and harmoniously meshed projectile, trajectory, and transition angles.  With the jump built I was beginning to feel the pressure and expectations weighing heavily on my shoulders.  It’s unusual committing to a project such as this. There was organizing of sponsor funding, scheduling film crews, securing a location, having on site first aid, accommodations, managing machinery time, shapingand the list continues.  All these little details are rarely acknowledged.  My simple concept had quickly manifested into a full scale cinematic operation. 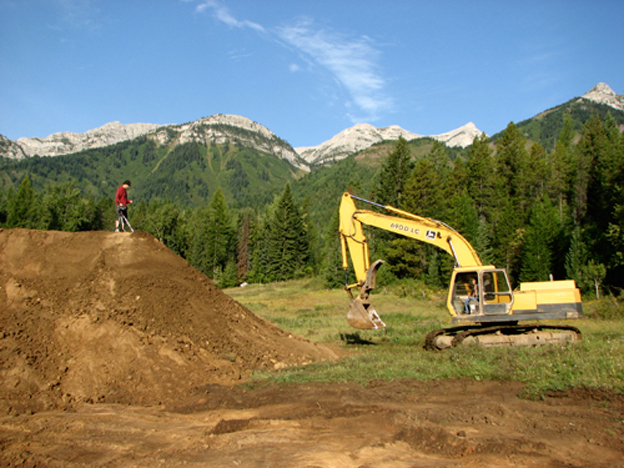 This ‘dish’ of shoot now lacked only one focal detail; the looming task of putting this manicured mountain of dirt to use.  The last night of the build Shirley and Rick had the crew basking in the salivating glow of the open flamed feast fit for fifteenth century King at court.  Has there ever been a better way to finish four days of dirty work?  Fatigued but full, we hit the hotel. 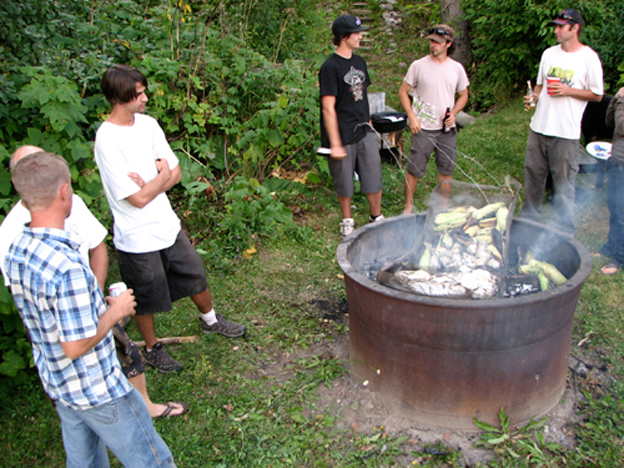 The dimensions of the hip went as follows … Lip height: 18 feet … Transition height: 20 feet … Transition length: 50 feet.  The lip was gradual and as close to vertical as any jump I have ever hit (dirt jumping included).  Granted, all precautions were taken into discussion and rectified. Even the run-in delicately submarined six feet into this planet’s lush outer crust to ensure the high velocity in-run could be managed. 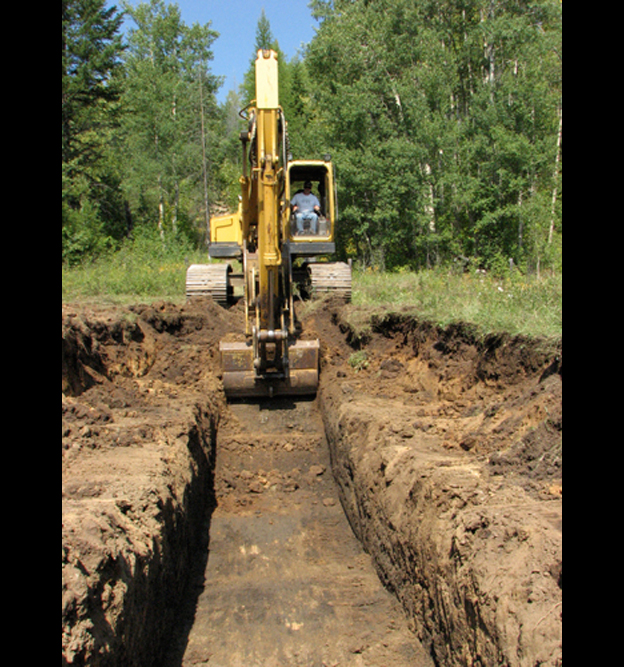 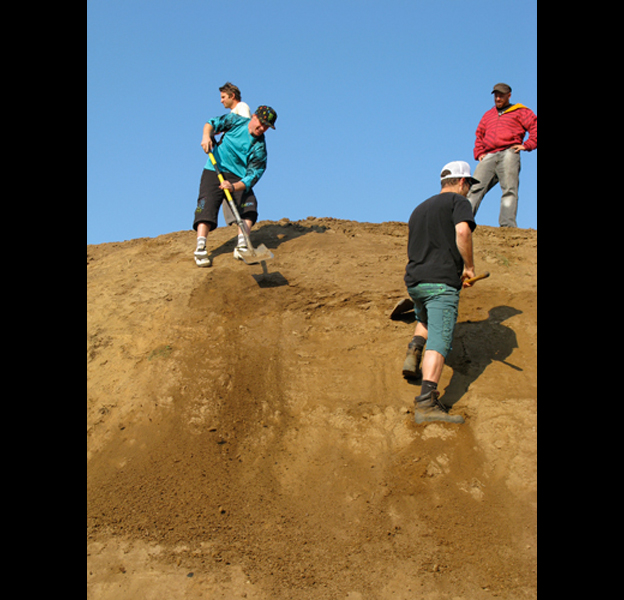 The golden morning light graced the foreign feature at approximately 8:00 am.  The jump looked as though it belonged in a Pharaoh’s tomb, and I was feeling more confident than Kanye West at the MTV Awards.  The word of our antics had spread around town and before long a small group of locals was swelling into a crowd. Today was the day. 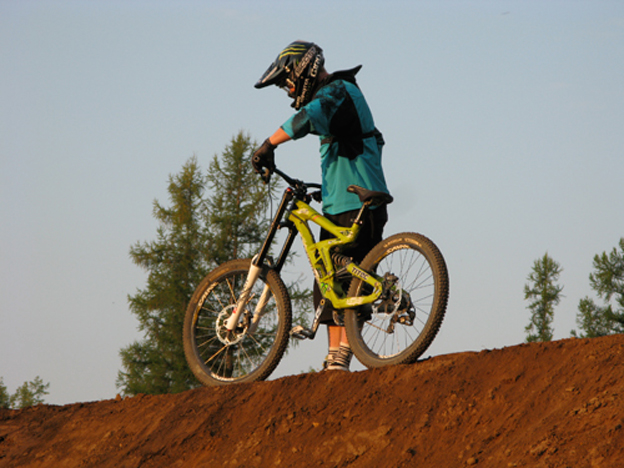 My first jumps felt really comfortable as I went through the motions, and progressively pushed higher and higher.   By my fourth jump I was consistently cresting the 18 foot measuring pole we had staked on the deck.  At this point I had come to the odd realization that the higher I went the more comfortable and familiar I was feeling.  As my nerves worked with the grain, I quickly concluded that if I was going to take this jump as big as it could go there would be no better time.  The pole was hastily taken down and the cameras waited anxiously.  I have been in these situations before but I experienced this one in a completely new light; I was having fun. 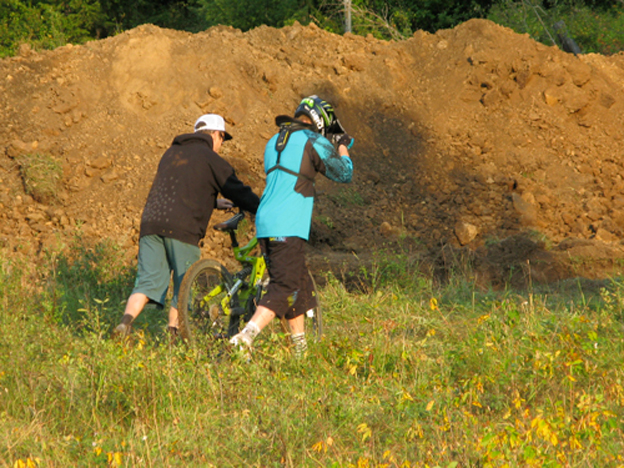 Often when enduring these moments I am nerve riddled and overly excited – not exactly a recipe for enjoying yourself.  This was different. I was relaxed, focused, and realistically ‘Stoked’.  I gave the signal to the cameras, stroked through a few pedals and playfully manualed and skipped down the fence-line single track, into the soil chasm (traveling noticeably faster than my previous jumps), compressed through the lip, and to tell you the truth just went with it.  I slowly bent into the tranny, flattened my body and bike out at apex,  spotted my ‘LZ’ (which I noticed close to the very end of the deck), pulled my bike under me, and braced for impact.  My suspension bottomed faster than a snitch wearing cement boots, arms crumpled, legs crinkled like an accordion belting the Polka … but I managed to hold on rocketing down the landing and into the field where I pulled the brakes to the bar. 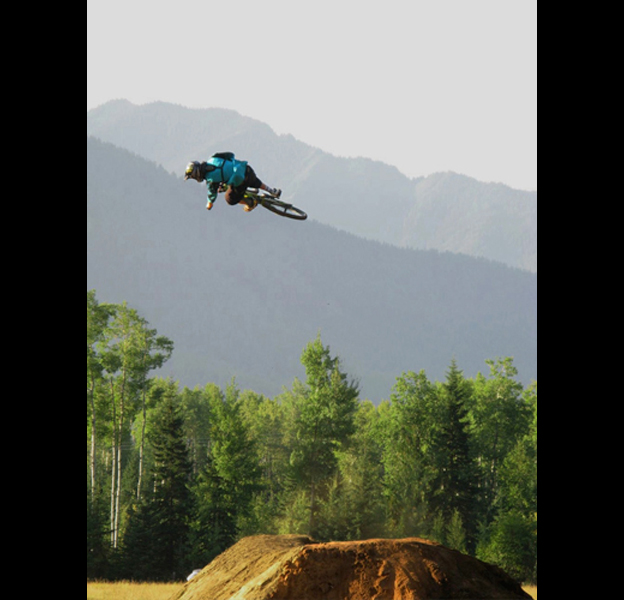 Knowing I had gone considerably higher than before I immediately turned to crew to gauge reactions. Ryan Gibb was yelling while giving me the thumbs up. Derek, who was down at the far end of the runway, was waving his arms like a castaway who had just caught a glimpse of a plane.  Dre who needs a flat of Monster and a good looking girl to get his heart rate up, was even beaming with approval, and Nurmi (Juicy Studios – Behind the Scenes) redefined amped. 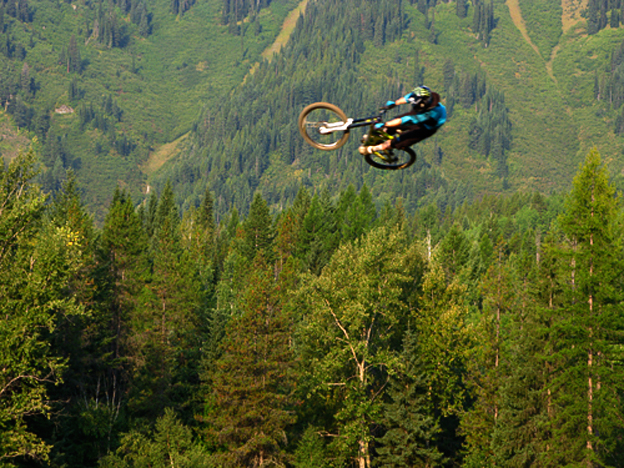 We all reviewed the footage and it was nothing short of Epic!  I usually don’t get to excited till I know we got the shot, but when I saw the move in motion I was speechless; it all came together like clockwork.  I concluded that that was the biggest I could have gone, given the unforgiving angles of the landing (which were a little too flat).  I impacted with more force than I have ever experienced, flat spotted my rear wheel, compressed the bearings in my headset, and had used all but five feet of the transition.  It was a wrap – my missing piece for the film was in place. 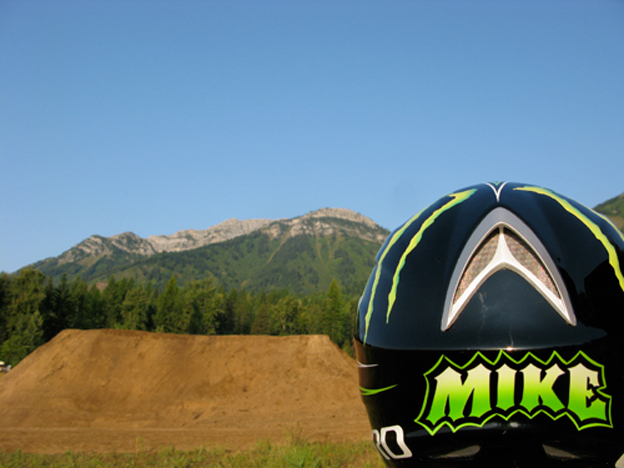 That night we went for dinner with all those involved and celebrated in true fashion.  I have to say a few big Thank You’s!!  Mark Ledoux for being on hand everyday prepared for even the worst of predicaments, Ali Harwood at Fernie Tourism for providing the entire crew with a place to rest our heads,  Sarah Windsor from RCR for pointing me in the right direction, Tara Mercier for introducing me to her Dad, Paul at Monster and PK for making the trek and supporting the cause, Adrian at Scott bikes, Dustin at Shimano, Barry and Karen at Titec, the Life Cycles crew, Nurmes and Dre for covering the behind the scenes, and lastly I can not state enough, Rick you’re The Man!  Thank you for everything, your and Shirley’s hospitality made this the easiest shoot we have ever done. From building to dinners you two had us covered and we feel privileged to have met you.

Keep and eye out for the the behind the scene video that will be released shortly, as-well as Frankowski’s photos of the big hit (not shown) coming to a magazine near you. And of course check it out in Life Cycles premiering Spring 2010.

Mike’s blog can be found at mike-hopkins.com/content

Looking forward to seeing the footage?  Think you are too jaded to be impressed?  I for one enjoy every word Mike puts down with the keys.  Orate this way…