WHISTLER Q & A
We were sitting around the creative table back in early spring 2009 during pre production planning asking ourselves, ‘What are we going to do next in the Whistler Mountain Bike Park?

Coming up with new ways to film one of the most filmed bike parks in the world isn’t easy. When the Anthill crew sat down to plan the Whistler segment for “Follow Me” we asked ourselves some simple questions.  The questions were simple but the answers took us in some new directions.

Q:  What is the Whistler Mountain Bike Park?
A:  A gathering place where chairlifts take you and your bike up a mountain that has lots of trails designed for you to ride down on your bike. 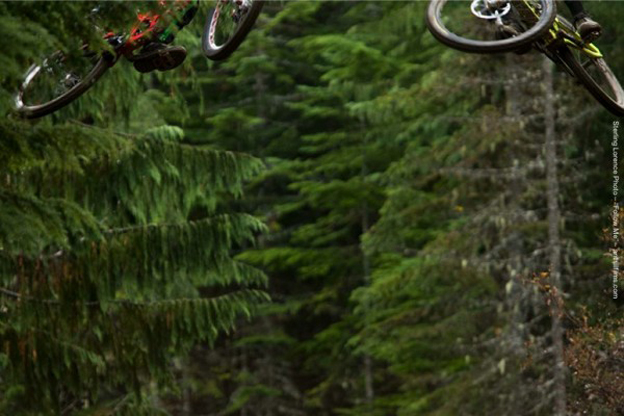 One of the most significant aspects of the Whistler Mountain Bike Park is its contribution to the cultural growth of mountain biking.  Specifically, the Park brings a social aspect to a sport that is mostly an individual pursuit.  In Whistler it is easy to do ten laps of a trail in one day.  And that means ten times going up the chairlift with up to three of your friends or perhaps people you have never met before.  The chairlift is almost always full with riders and bikes.  There are riders all over the trails. This is an extremely social environment as far as mountain biking is concerned.

The effect of the Bike Park on the culture of mountain biking is huge. Where else can you go and participate in your sport with your favourite professional athlete?  It is quite unlikely that you will be able to golf a round with Tiger Woods and yet it is quite possible that you could do a lap on A-Line with Brendan Fairclough and Thomas Vanderham and then get to talk about how much fun you just had as you ride back up the chairlift with them to the top of the trails. 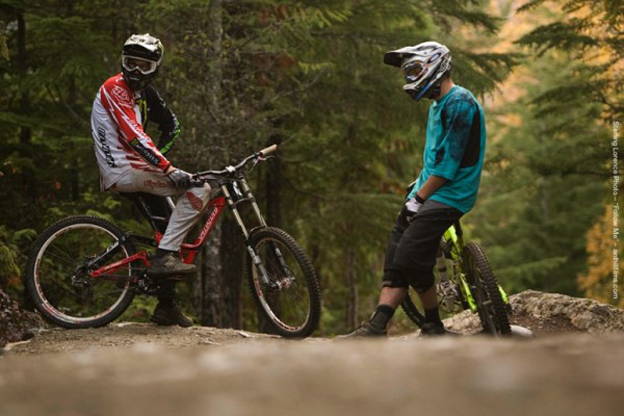 Q:  What do you need to do to make a great bike park movie segment?
A:  Take the best riders in the world and find out what makes their ‘best day ever’ in the Whistler Bike Park.

A Whistler Mountain Bike Park segment is a challenging segment to film.  One of the main reasons is that we have filmed in the Park a lot during our time as filmmakers for The Collective.  The segments from ‘Roam’ and ‘Seasons’ already involved multiple riders riding together which is a central concept of ‘Follow Me’. Furthermore these segments made use of a lot of the best terrain in the Whistler Mountain Bike Park and we do not like to film parts of trails we have already done in previous movies. As a result of this, we were sitting around the creative table back in early spring 2009 during pre-production asking ourselves, ‘What are we going to do next in the Bike Park?’
We began by detailing what we wanted to achieve with the Bike Park for ‘Follow Me’ .  The concept had to be entertaining. And it had to motivate people who have never experienced the Park to check it out.  But by far the biggest challenge we faced was figuring out how to do this while coming up with something to impress the Whistler Mountain Bike Park locals at the same time.
The locals are riders who ride the Bike Park a lot.  These people easily put in over 90 days a season in the Bike Park every year.  These people know the trails well.  They know when changes are made to the trails.  They know when new lines are discovered on the trails.  They are usually the ones who discover the new lines.  The wooden bridge on the trail you ride on, these people figure out how to jump over it. 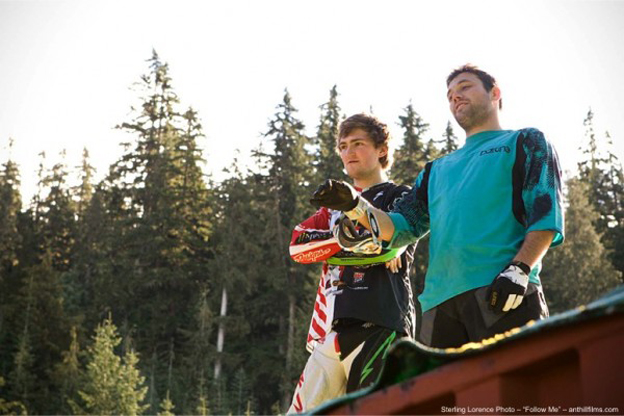 If we satisfy the first requirement of our ‘Follow Me’ Whistler segment and motivate someone new to come and experience the Bike Park then our segment will be good.  If we can achieve this and at the same time make the locals say, ‘Whoa, that was something new!’ then our Whistler Mountain Bike Park segment will be great.

So who do we film in the Bike Park? We film world cup downhill racer Brendan Fairclough of the UK with free riding superstar and Whistler bike park local Thomas Vanderham.   Why?  Because friends of ours like Matt Hunter say things like, “You guys have to shoot with Brendan Fairclough.” And for Thomas, he’s constantly discovering new lines and doing it with racers like Brendan is something that makes a great day for him in the Park.

When we asked Brendan what the Whistler Mountain Bike Park meant for him we knew we were on the right track. He said ‘…the bike park is about having fun on your bike.  The pressures of the racecourse and racing points are non-existent.  Riding down the trail I am having so much fun I don’t want the trail to end, so I get sideways as much as possible so that I can make the ride last as long as it can.’ 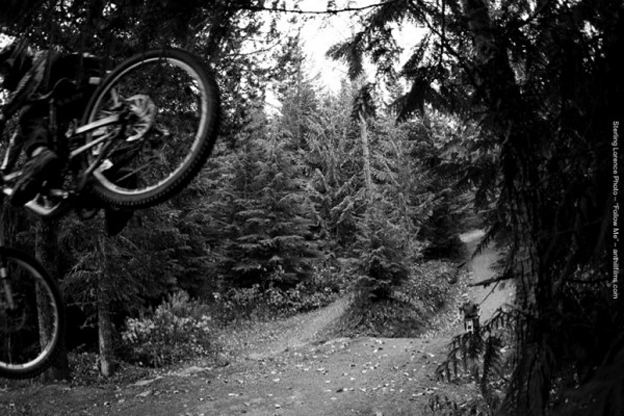 Our concept for the Whistler Mountain Bike Park segment in Follow Me is based off of Thomas and Brendan’s best day in the Park.  This day actually happened during Crankworx 2009 – so this fall we revisited some of their lines from that day.  And now their best day ever in the Park may have happened on our shoot.  They had fun riding together while shooting the segment and having fun on your bike is what ‘Follow Me’ is all about.

Anthill Filmmaker
jonathan schramm – in production on Follow Me

Are they on the right track?  Can the Whistler segments from previous Collective films be improved upon?  Are these the right athletes for the job?  Add your voice here…