There we were waiting below the first section of Reaper on the Skyline trail.  Everyone came down in order and found their place in the queue ready to continue the steep descent.   Eamonn was all set to drop when Tbone decided to snake him with a laugh and shred in.   The rest of us just sort of looked at each other, chuckled and let him go.   Trevor messed with the system – the unspoken system.

Large group rides can be better than a new bike under the Christmas tree – or they can kill your mojo like a game 7 loss in overtime.  When the group is tight and charging the vibe gets amplified and everyone starts to pin it even harder. With each rider added to the posse the chance of mishap ramps up.  A couple of flats, a complainer or a range of riding skill that is too vast can bring down even the most chipper group.  Riding with a large crew can be a crap shoot. Riding alone – maybe even having a meeting with yourself – can be sweet, but given the choice I saddle up with buddies. 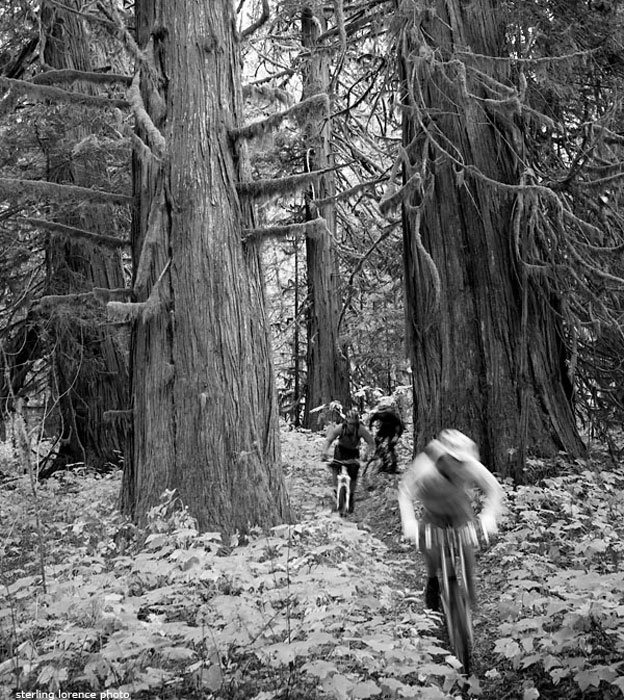 In a perfect world you’d have riders that are slightly faster than you up ahead and one just a little slower tailing you. There’s nothing better than going flat out on your buddy’s back tire without having to slow down. I like to keep contact with the rider in front when I can and I probably ride a little close when given the opportunity.  Like most riders I’m happiest going as fast as I possibly can.  I also admit to getting a little testy when I have to stop or miss a stunt because the rider in front of me is a little slower than I – just one of my many character flaws.  Luckily I’m slow enough that this rarely occurs – to me.  More often I do it to someone else.

Everyone seems to have their own version of group ride etiquette.  It’s almost always unspoken and everyone thinks their vision of how things should go is universal – and correct.  On the Shore there are often spots to muster on the trail, sometimes because of an intersection and other times to keep the group from getting too spread out.  When this happens and everyone figures out the ride order for the next sequence you get some insight into each rider’s Ride Order Philosphy (ROP).  Everyone seems to have a slightly different take on this but there are a few trends. 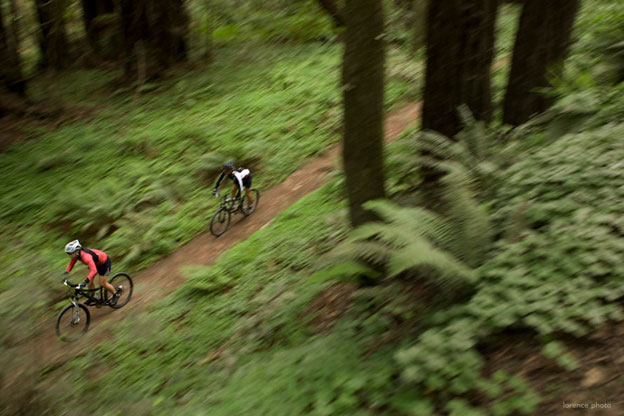 Racer Boy ROP – you gotta earn it
James Wilson, one of my frequent ride buddies, is a proponent of this ROP – although I’ve never heard him say it out loud.  This philosphy dictates that the ride order should be preserved – like a baseball batting order – when the ride gets going downhill again. (note – James employs this philosophy uphill or downhill but since I’m usually last on the uphill I don’t pay much attention).  That means you have to earn it with a pass (very rare on the skinny trails of the Shore), when the rider ahead of you concedes you are faster and lets you go or, more commonly, the rider ahead fumbles, crashes or rides off the trail.  Proper etiquette dictates you must say ‘see ya at the bottom sucker’ on the way by.  This system rolls nicely when others buy in and figure it out but it can be a little too rigid for my liking.  A failing of Racer Style ROP is that strict proponents will use this to determine the downhill on rides that begin with a climb – and everyone knows the fastest climber may not be the fastest descender (although Wilson frequently is). 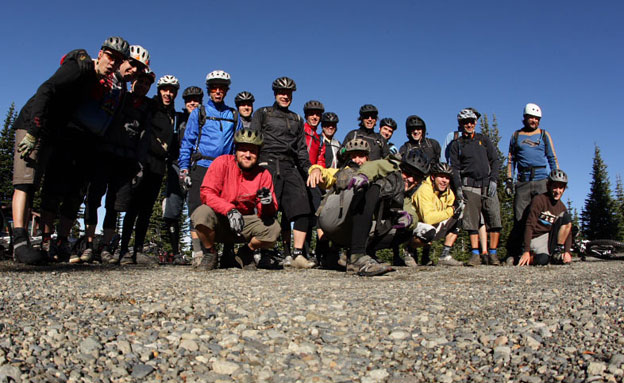 You can bet there was some tail gating on Wade Simmons stag ride.  Photo ~ Sterling Lorence

Natural Order ROP – cream rises to the top
This is the most often employed ROP I come across.  When riders figure out who is faster and slower than they are they urge faster riders to go ahead of them and riders who aren’t as fast as they are do the same to them.  This works well because you rarely have the rider in front of you slowing you down.  Unfortunately virtually everyone, myself included, thinks they are actually faster than they are. Then there is at least one rider in every group who doesn’t catch on to the ROP being employed and they duck in early and mess everything up.  When riders are evenly matched this ROP doesn’t work well.  Refer to Racer Boy ROP above in this case.

Spread the Love ROP – we’re all special!
Some like to lead, some need to lead and a rare few just don’t seem to give a damn.  Many of the riders I know figure they ride best off the front, which makes a lot of sense.  You can see where you are going and ride at your own pace.  With my buddy Mike Wallace we generally switch off like kids sharing a remote control car.  Unless one of us is feeling sketchy (usually me) and voluntarily takes the caboose we pretty much just alternate so we can split the lead vibe.  Of course if there is an opportunity to pass we leap at it and the ‘so long sucker’ rule applies.  This only works with two or three riders and for more either Racer Boy or Natural Order is recommended. 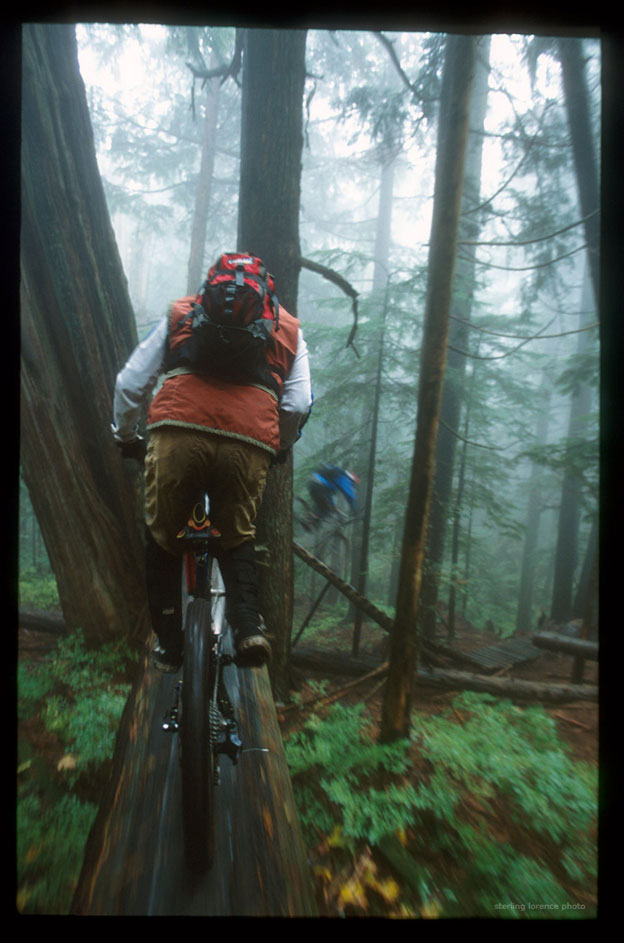 Free For All ROP –  only the fastest survive
I’ve ridden with a few groups that stop for nothing.  Got a flat and your pump is forked?  Too bad – the group is gone.  I can see the appeal of keeping the flow but I’d rather know that everyone has survived the section before starting the next one.  If everyone is staying together and riding well this can be a blast – but when something goes wrong and you are a two-hour hike from the bottom it can turn into a gong show. Free For All works great at lift accessed bike parks like Whistler where you know someone will eventually find your crumpled carcass if you crash.

A problem with any ROP is that there are riders who like to hound dog (as James puts it) and riders who like to have some space behind them. I get stoked following close but lots of riders start to shit the bed when someone is on their tail.  I am actually in both camps;  I don’t mind someone following me closely but I certainly mess up more when they are – particularly someone who is smoother, faster and more debonair than I. 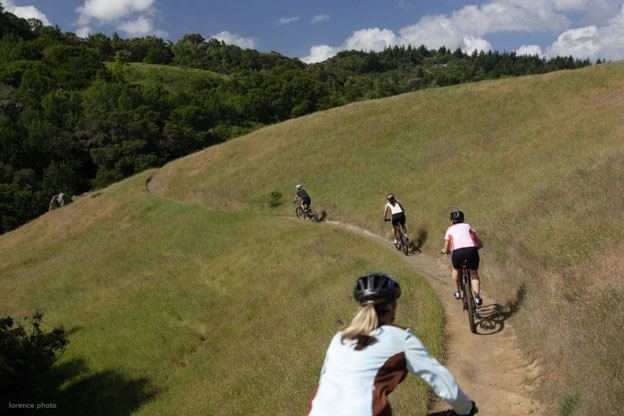 You don’t want to be slowed down on a trail like this.  Photo ~ Sterling Lorence

I find it hilarious when riders treat a stop as a chance to move up in the peleton. I’ve noticed this particularly with European journalists.  Everyone comes to a stop in the order they arrived and then a couple of sneaky French or Spanish riders will stealthily move through the pack until they can easily head off again at or near the front, sort of like drivers who merge at the last possible moment.  When the trail is too narrow I’ve even see some of them pick up their bikes, walk around in the bush and then plunk their ride down at the head end. To be fair they are often the fastest riders present.  Most of us Canadians are too busy pretending to be polite to pull that.

It’s always great to see who you can keep up to and to measure yourself against other riders in the group.  We’re all striving to improve and go faster and if you aren’t riding against the clock your riding buddies are the best way to see how you’re doing.  It may be freeriding but we’re always racing to some extent – even if we pretend not to be.  A wise freerider gave me some valuable insight into a mountain biking character trait when he declared, “I’m more non-competitive than you are.” And indeed he was.

What is the ROP in your posse?  Do you always ride in the same order?  What other ROPs are there?  Hound dog over this way…