In my Initial review of the Vholdr ContourHD I canvassed technical specifications and said: “A more involved review to follow will look at the Vholdr ContourHD for use primarily in the sport of freeride/downhill mountain biking. It will also suggest some easy-to-implement mounting option modifications“. The purpose of this follow-up article is to fulfil these goals.

LONGER TERM IMPRESSIONS OF THE CONTOURHD

Here are some additional comments on the ContourHD following more use:

I had some “unresolved questions” from my very quick and dirty initial review and have the following answers: 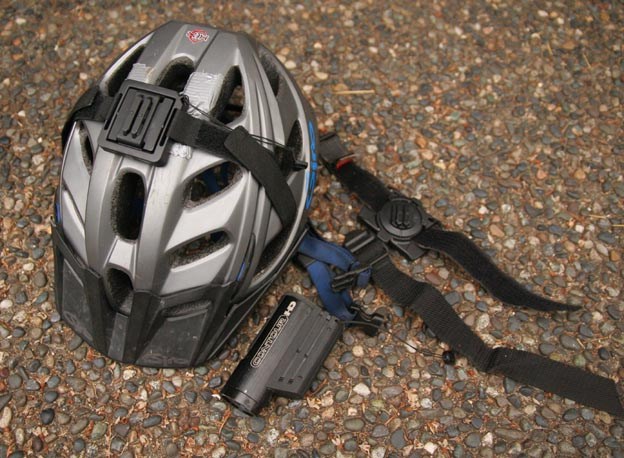 On the left, vented Helmet Mount which is annoyingly difficult to set up on different helmets. On the right is the Goggle Mount which I found to be much more useful. I used it with different lengths of webbing and buckles (also pictured)

The helmet mount is designed to be worn on a vented helmet and to record video footage from the point of view of the person wearing the camera. The straps are so long that they won’t work on many vented helmets. Luckily I have three helmets with which to experiment or I would have been cutting and sewing velcro to get the straps to fit.

Finally the interface between the camera itself and the mount isn’t tight and has play. I’m not sure how much all the looseness in the mounting system contributes to the jitteriness of the ContourHD footage but I would guess that it contributes at least in part.

As a side note I had helmet straps tight to the point that my head felt constricted when shooting the video footage at the end of this article and still thought that footage was jerky.

In summary this mount is not particularly well thought out. Here are some suggestions to Vholdr for improvement: 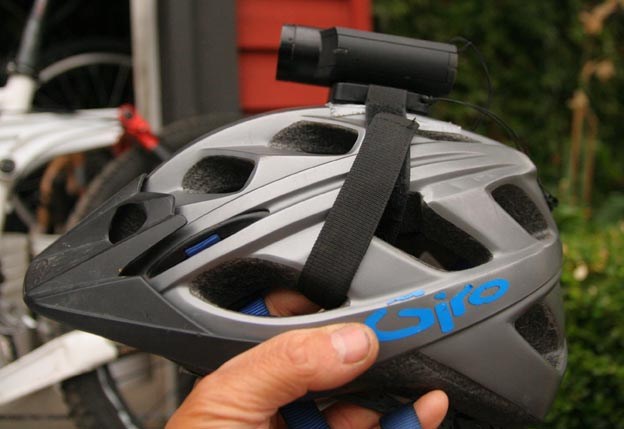 This is a well-executed mount. It’s basically a two-piece plastic mount which can be used on any webbing. The mount can be rotated so it has some vertical (up/down) adjustment. One can then adjust side-to-side (fore-aft) display with the wonderful 192 degree Vholdr ContourHD rotating lens feature. This gives you a lot of flexibility in mounting options. Not only can this be mounted on goggles, you can mount it on any webbing and then tie that webbing off on your bike –> thus endless possibilities.

The only defect in this mount is however a serious defect. As with the helmet mount there’s play in the system. The same criticisms and suggested fixes as I made about the helmet mount also apply to the goggle mount.

One comment I would make about the goggle mount is that it produces footage with a trait common to all helmet-mounted cameras. There’s a sense of isolation from terrain and surroundings in the footage as there’s no rider presence. For example you don’t see the riders hands, or handlebars in the footage. Since some people prefer to have this sense of isolation, this is not so much a critique as an observation. Another comment I would make is that, in FR/Downhill situations tilt the camera up (and not parallel to the goggle webbing as in the Vholdr stock photo). You’ll be crouched low and your body will be tilted down when you’re going downhill – you want that camera to be tilted up slightly ( 5 to 10 degrees from the horizontal plane) to compensate for the terrain you are riding and your body position. 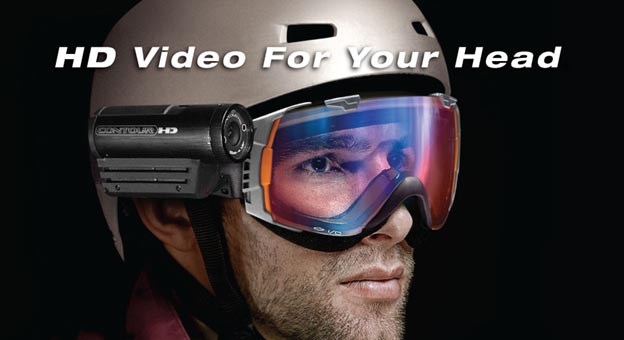 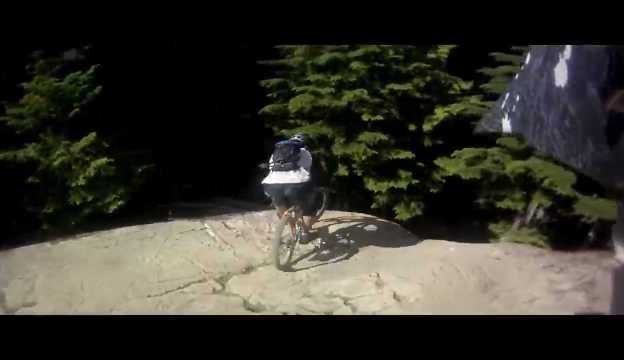 Goggle mount on a goggle (stock footage from Vholdr) and screenshot. Video with the goggle mount while doing high speed runs in the Whistler Bike Park is here

VARIATIONS ON THE GOGGLE MOUNT

This one is simple. Webbing with a ratchet strap on the end is secured to the downtube of the bike. The footage itself is relatively non-jerky. The tricky part is getting the aim of the camera right – bear in mind that you won’t get that much useable footage as the front fork occupies a lot of screen real-estate and this will be worse with a double-crown fork. But you will get some neat viewpoints and cool footage of the front suspension doing its thing. 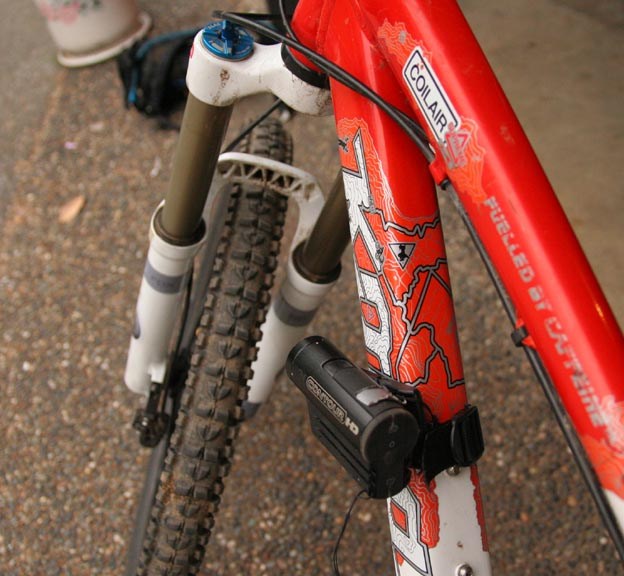 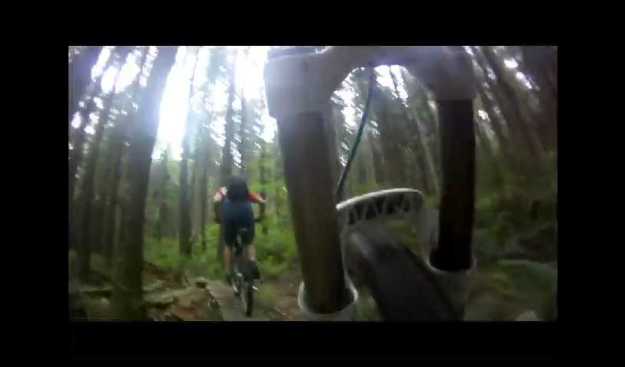 Goggle mount on the downtube looking forward and screenshot

For some reason this results in jerkier footage then the variation where the camera is webbing-secured to the downtube; possibly because the position is higher on the bike. However, you will get a good view of upcoming terrain and riders who you are chasing without the fork occupying the screen. 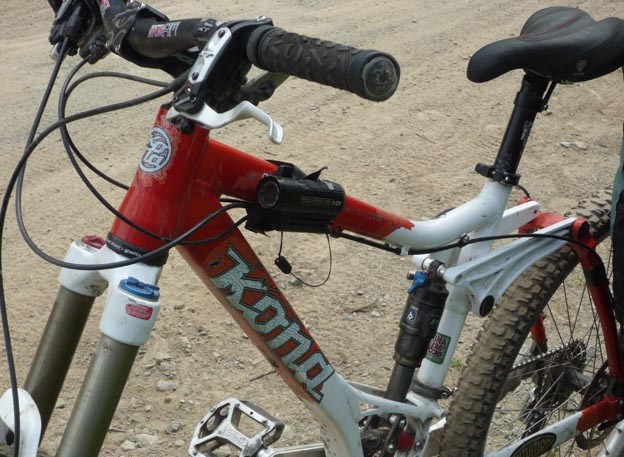 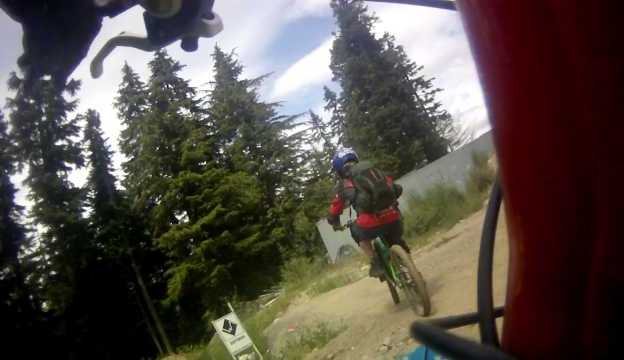 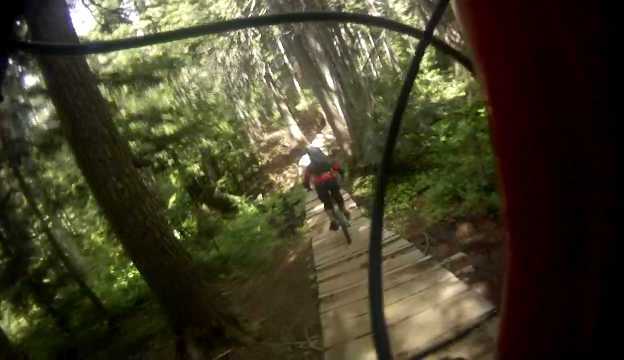 Goggle mount on the top tube looking forward and screenshot

You won’t want be able force anyone to watch an entire video of the rear suspension of your bike working. However, if used sparingly, this mount’s footage can add some cool vantage points to a video especially if you’re riding over interesting objects (eg a long skinny, a teeter-totter, or getting some big air). This mount has the advantage of being really easy and quick to set up. It’s disadvantage is that the output video is very jerky in rough terrain so reserve this for smooth trails. 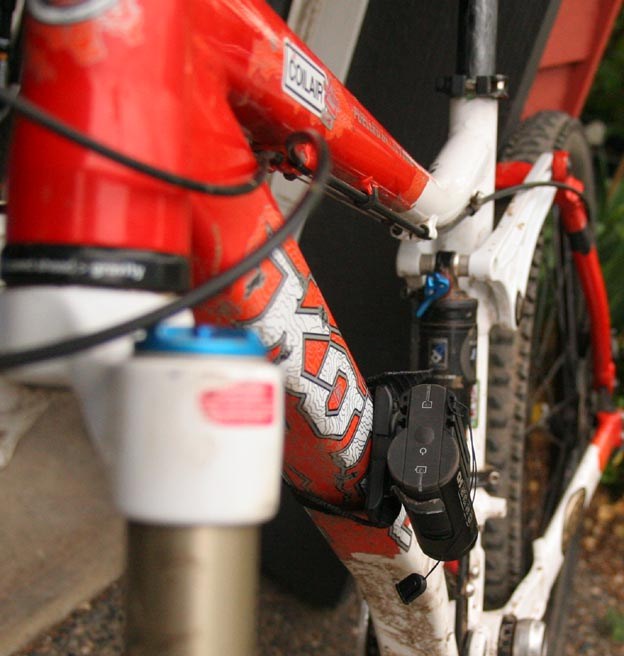 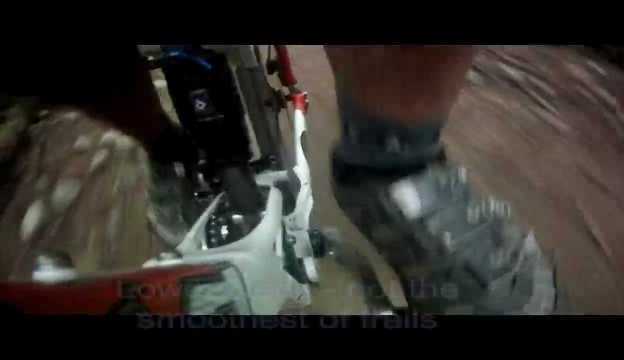 Goggle mount on downtube looking down and screenshot

This mounting option has possibilities except that I used it on a bike with a long swingarm. On big suspension moves, the swing-arm can contact the camera and hit it. When this happens, one immediately sees the advantage of using a non-rigid mount like a webbing strap as the strap takes the hit; while the camera is dislodged and nothing is broken. Footage is still jerky as the camera sits relatively high on the bike but it’s an interesting perspective seeing the suspension work. Also you get the vantage point of seeing the trailing rider. Unfortunately, on steep trails where you get behind your seat this has the tendency to become a crotch cam.

As a couple of side-notes, depending on how the camera is mounted, you will probably want to adjust the orientation of the camera lens by rotating the lens so the footage isn’t tilted as in the screenshots below. Because the backpack-mounted cam worked so well for rear-facing footage I didn’t end up using this mounting option very much. 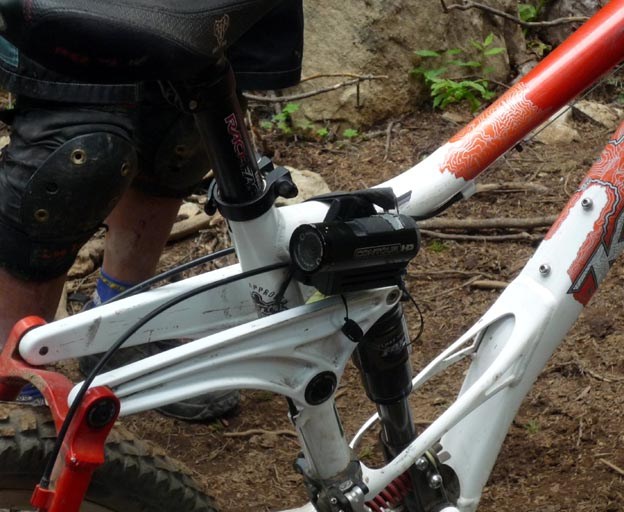 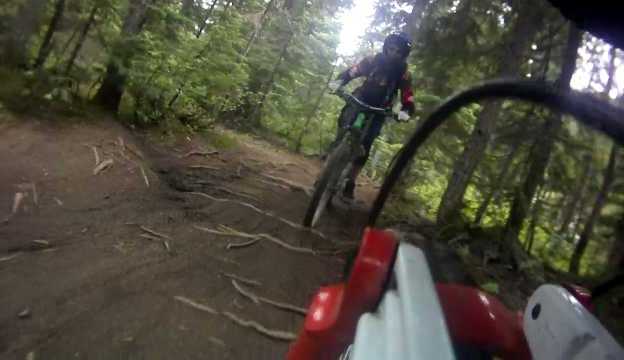 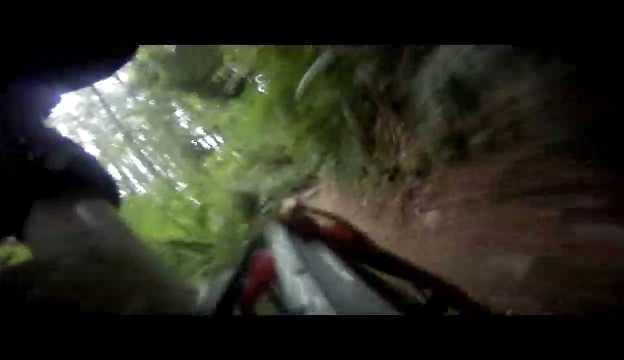 Goggle mount on top tube looking backwards. NOTE – in the top tube, make sure to mount the ContourHD the way up pictured in the photo to give yourself a bit more clearance from the swingarm.

I liked the chest – mounted footage I had from the GoPro chest-mount so much that I badly wanted this mount option to work. I’m not sure that it has worked very well but will keep tinkering to hopefully get better footage. Basically, you have to take some long webbing (preferably elasticized – I used a old heart-rate monitor strap) and then mount the goggle mount on that webbing then wear that webbing around your chest. Then you have to angle the mount so it points at your stem looking forwards. You then have to rotate the camera’s lens so resulting footage isn’t tilted. I think this mount has potential in the right kind of trails but it will need some refinement and more experimentation.

Here are some issues I had with this mount. 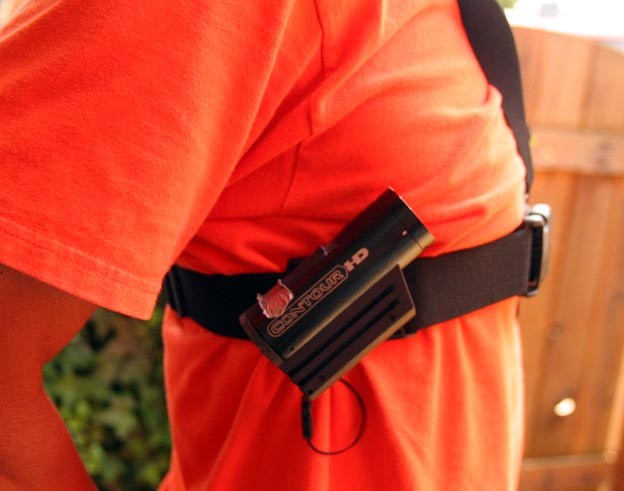 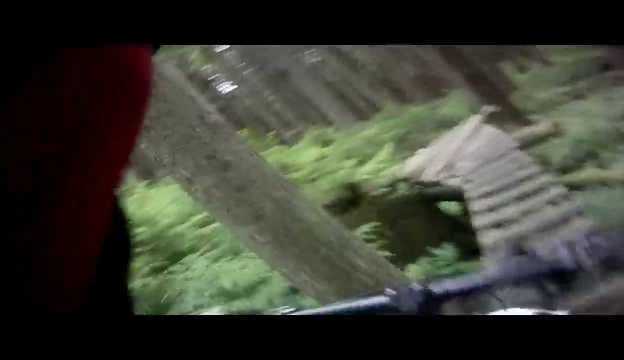 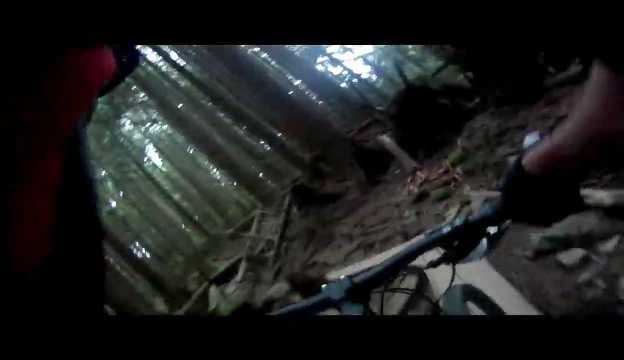 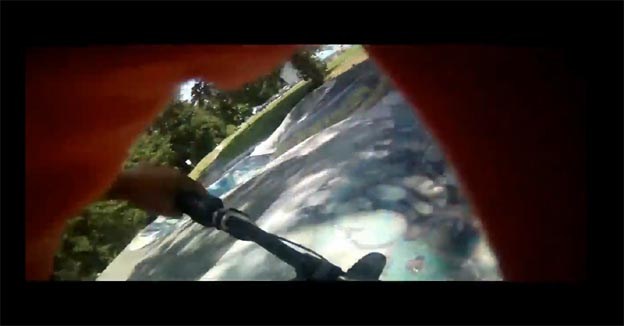 Goggle mount on a piece of webbing worn on the side of the chest and screenshots. Note that you should adjust camera orientation so it is level. Check out the test video in the skate bowl

I happen to have an old backpack I still use that has webbing going from side to side laterally. That webbing is used to carry stuff (eg jacket, armour etc) but is a perfectly convenient place to place the goggle mount and have the ContourHD in a position looking backwards. If you don’t have a backpack with lateral webbing it wouldn’t be too much trouble to tie off some appropriate webbing side to side on your pack. The toughest thing to do is to get the appropriate camera angle for the mount. Here are some tips: 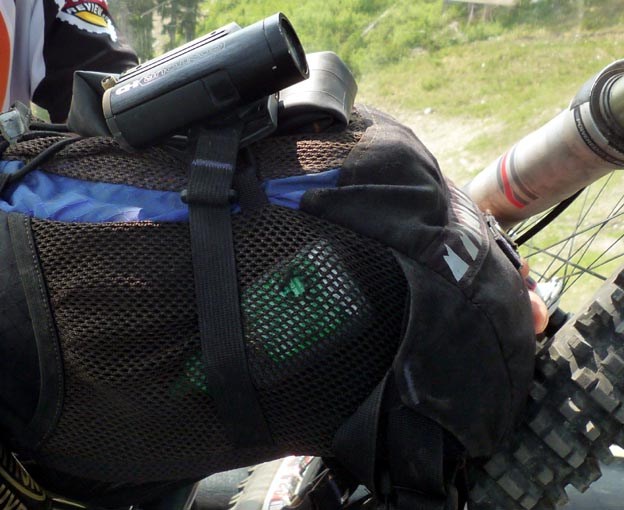 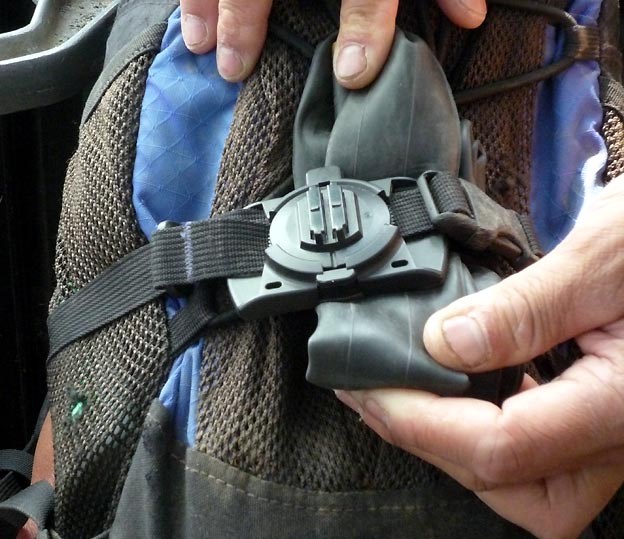 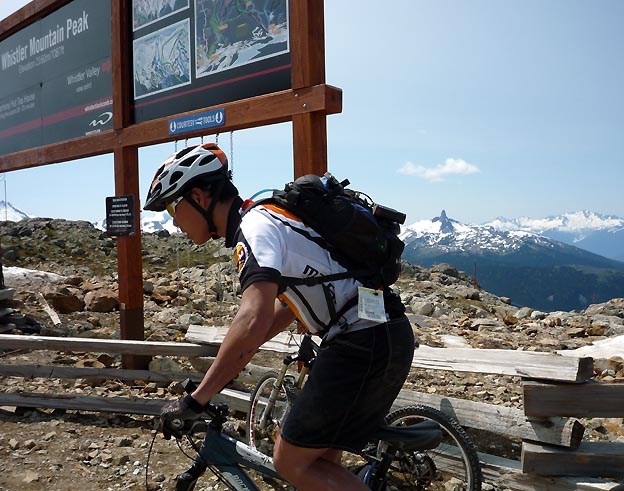 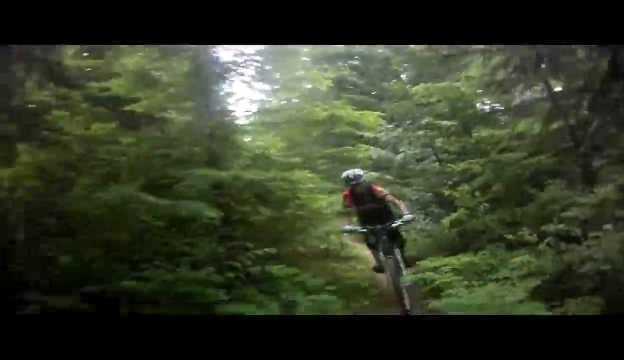 Goggle mount on backpack. Works on backpacks with side-to-side lateral webbing. Or one could jerryrig lateral backpanel webbing

I close with some thoughts on editing videos and the reason for investigating different mounting options. In my opinion, videos with just the POV of the rider wearing the camera can be made much interesting with different camera angles. This is why I wanted to investigate different mounting options for the ContourHD. I hope that this article will spur others to also come up with creative solutions. Finally, after having all that video, edit it and share it – with friends, family or the world. Done well, your videos can be entertaining.

Reproduced from my review article about the GoPro POV camera

1. Try to include some different perspectives. Mix up Helmet, Stem, Reverse and maybe some footage from stationary observers

2. Short is better than long. Some have said 1 minute. Personally I find 3 minutes is about right. I violate this rule all the time of course and will plead that when it’s videos for the benefit of friends that I put in as much footage as possible to keep them happy.

3. Videos look better when either you’re chasing someone or someone is chasing you. It’s nice to have some other person in the frame.

4. Videos of climbs are boring (I say this as a former shaved-legs bib short-wearing xc racer). 15 seconds of downhill trumps 15 minutes of video footage of sweaty climbs.

5. Everyone will criticize your music so don’t worry about that. Unless you like Zamfir with the pan-flute.

6. Use whatever software you need so that you’ll actually make those videos. I know someone with 12 hours of video on their POV that they bought last winter. They bought the horrifically bloated Adobe Premier Elements. I’m sure this is wonderful software if you want to work for Pixar or have unlimited time to play with buggy, bloated , take-over-your computer overloaded functionality crapware (sarcasm intended) but maybe stick to something that’s adequate for its intended purpose and won’t give you a raging migraine as soon as you look at its user interface.

7. Get quick-to-learn, easy-to-use, simple workflow video editing software . My personal choice is AVS4You which has slightly more functionality and will read not just Microsoft’s .wmv and .avi formats but also Apple’s Quicktime format and most importantly is easy to use.

Burke flows like a river from Lee Lau on Vimeo testing various mounting options. Vholdr- hosted video is below

Seymour ride – tested various mount options of the Vholdr ContourHD from Lee Lau on Vimeo. Vholdr- hosted video is below

COST AND HOW TO GET THE CONTOURHD

Note that the vented helmet mount does not come in box for the consumer ContourHD product.  In the box is the goggle mount and the small circular flat surface mount. I didn’t mention the flat mount because you’re not going to find too many flat spots on a bike.

You can buy the Contour HD at Helmet Camera Central, Amazon.com, or REI.com – price $299.99 USD.  You can find accessories for the ContourHD at PointofViewCameras –

Comments, experiences or questions about the Vholdr ContourHD?  Sound off here