Pretty much everyone that I ran into over the course of the weekend at Race the Ranch asked me the question. I had mulled it over all week and just before the race began I was starting to think that maybe I should have entered. I hiked up the course from the bottom to see how it was holding up in the dry heat, and man was I confronted with compelling evidence to support my decision. 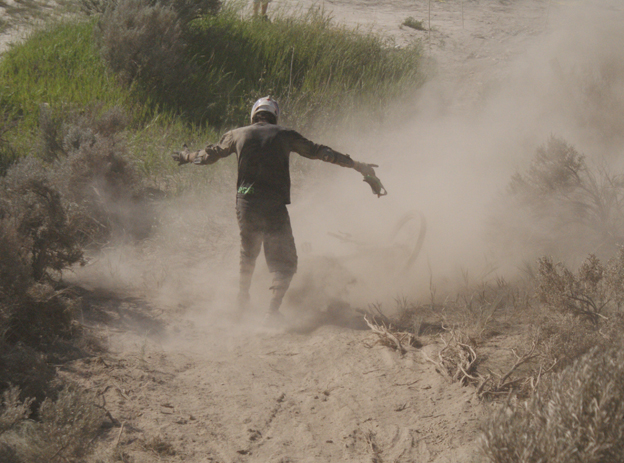 Aaron Dobie attempts to locate his bike in the dust.

The dust was eating riders alive. It was so thick and so deep that when a rider crashed they were left frantically searching for their bike, usually having to remove their goggles to locate their bikes in order to finish their run. There was one location in particular, in the bottom quarter of the track right before you hit the pedally section at the dirt jump park, that managed to claim the lion’s share of riders. At one point 5 riders in a row were claimed by the dust/chalk. 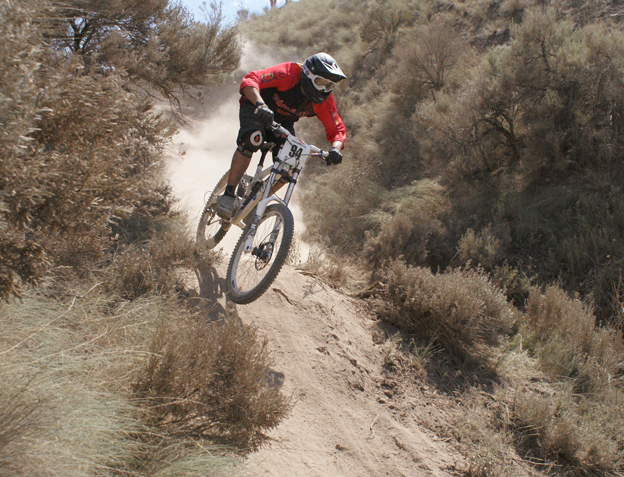 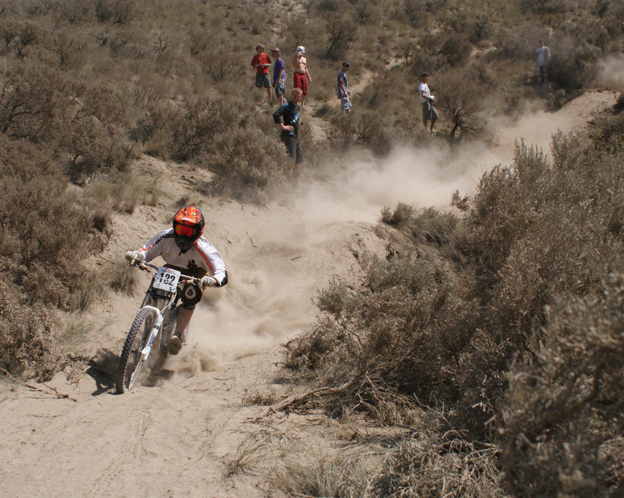 Caption: Some fared better than others with,  Steven St. Denis (Plate 94) and Martin Newman (Plate 132) looking super cool and confident in the waist deep dust. 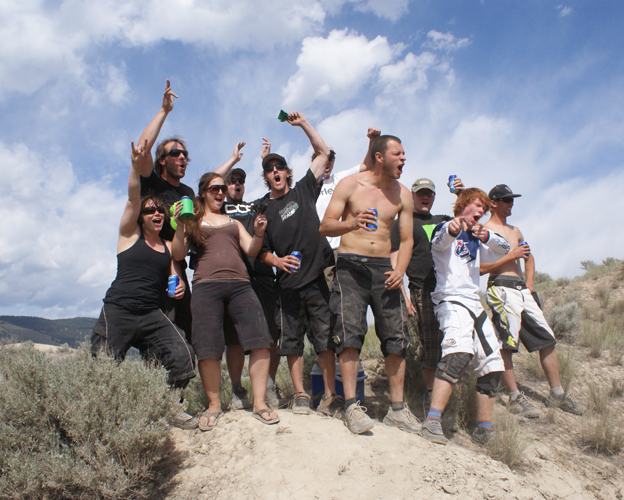 This motley crew kept the riders on their toes, screaming and shaking the Cow Bells! You can truly never have enough cowbell.

Standing high above the riders at Hecklers’ Ridge we watched rider after rider auger their way into the ground after being bucked by the crater sized bomb holes that developed over the course of the race. Combating the dust and the crater holes was only half the battle for the riders. Due to shape shifting ability of the dirt riders who had picked their lines early in their practice runs were left to deal with the task of picking new lines because their race lines had disappeared. The riders who went early on in the categories had it the best as the punishing assault of 340 riders sessioning left the Elites with a windblown, crater-strewn shell of a DH track. 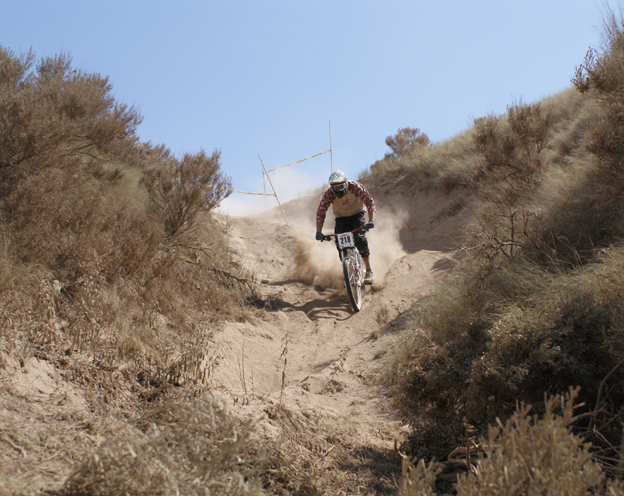 Shannon Rozel enters the section that claimed many. Word on Hecklers’ Ridge was this was the line to take, right down the middle. But what did we know? 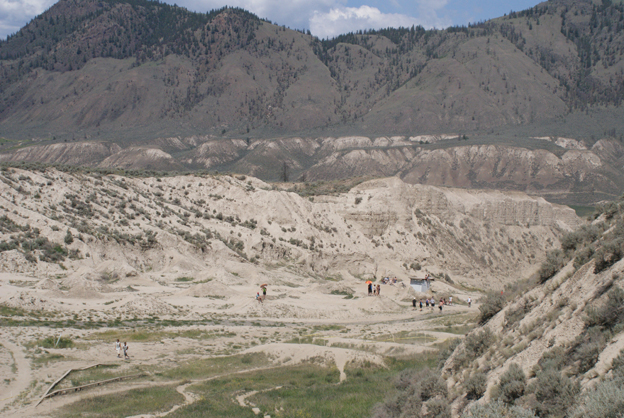 The lower section of the course, notice the umbrellas in peoples hands to block the sun!

There was an XC event as well on the Saturday. I was out riding other places but I shake my head when I think about someone willingly pedalling that far in the Kamloops heat. Kudos to you all. 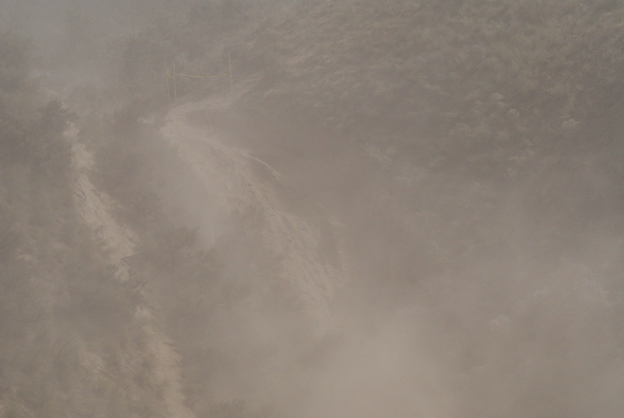 And then the dust storms hit!

Considering the condition of the track by the end of the practice runs and the dust storm mid race, the riders’ performances were impressive. Congrats to all for your times and thanks for supporting local racing.

Big shout out to Jeff Bryson for taking the lead in the series. 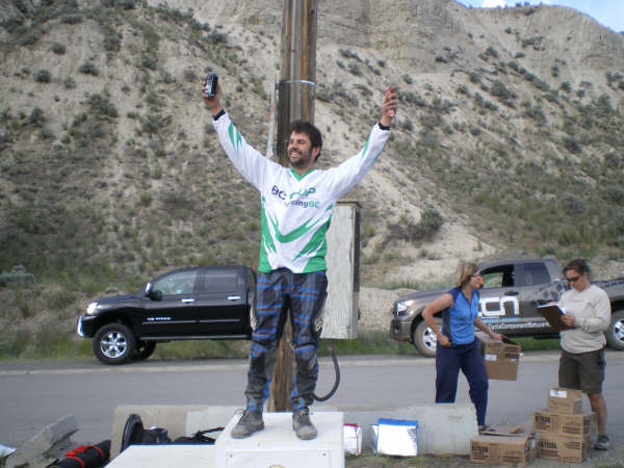 So far the racers have tested their skill and agility on the mecca for baby heads and flat landings of Ned’s Atomic Dustbin on the North Shore to the wind lashed, dusty Dh track at Race the Ranch. Up next for the masses, The Arduum Challenge in Mission on the 20-21 of June, 2009. Greg and Denise throw what is easily the steepest event in the series.

For a slightly different take on the weekend here is a video from Goldstein Productions,