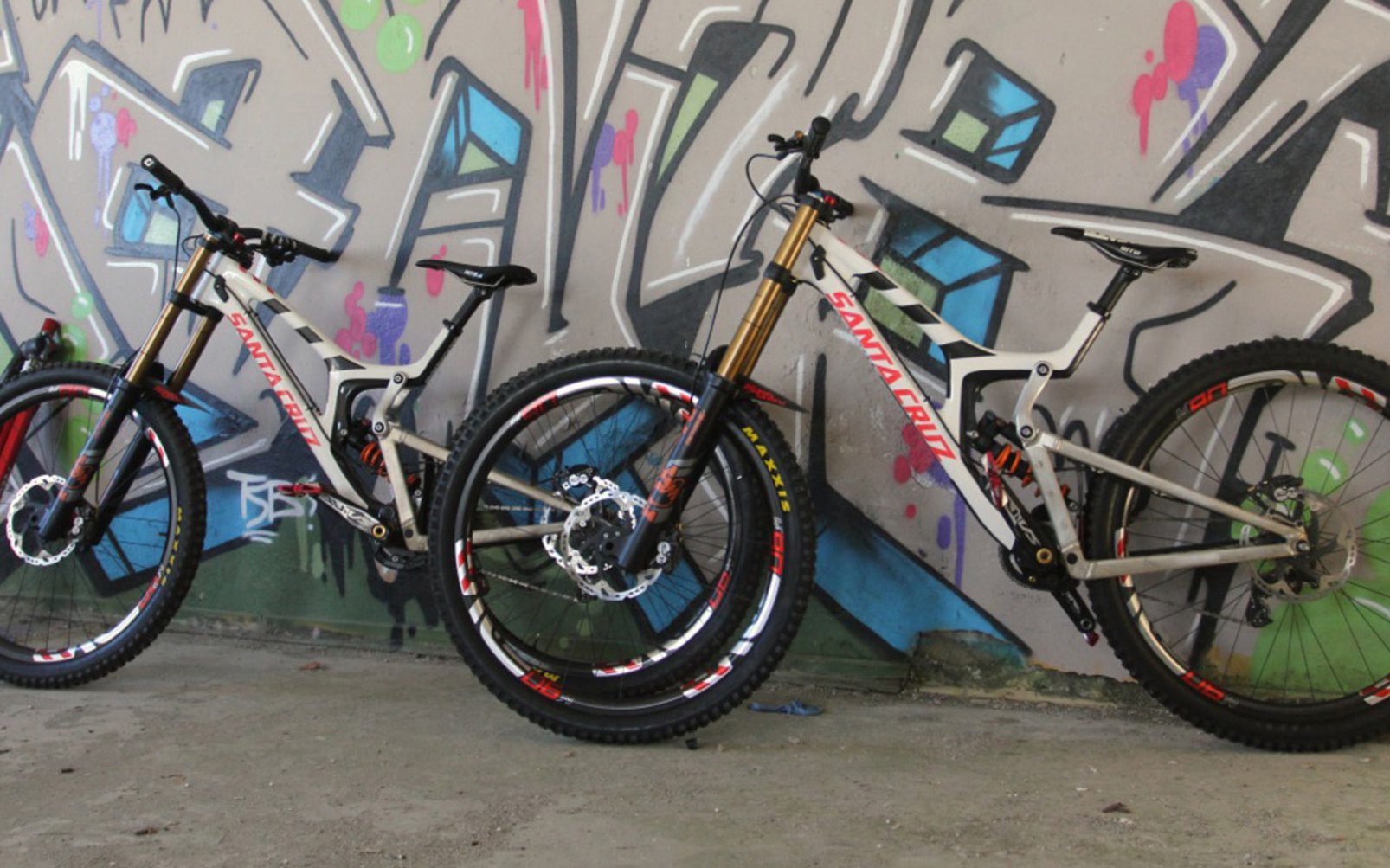 Rumours have been swirling since the summer. At Crankworx we spoke to one World Cup mechanic who didn't think the 29er DH bike would happen because of logistics. If big wheels are faster on some tracks but not others, that means teams will need to bring two sets of bikes and wheels. His feeling was the cost and transportation challenges of that were prohibitive. Despite that, there are rumours that several companies including Mondraker and Trek will be debuting bikes in Lourdes. And now we know of one brand for certain.

Santa Cruz just announced that the Syndicate will be riding 29er V10s at Lourdes (full release below). Answering the why question is simple; they have ridden the bikes and the times are lower. The impetus came from Greg Minnaar; "I raced the Hightower at the Enduro World Series in Finale... I knew we had to come back to the 29er V10 idea."

An interesting component of this story came from a former UCI employee who now works for a bike brand. He told us that the UCI's commercial availability rule comes into play in this case. Another former DH insider we spoke to felt this rule didn't generally apply to DH. Finding anything on the UCI website is tougher than locating hairy legs in the Tour peloton. What we found is quoted below and it came from this document, but it wasn't identified as specifically applicable to DH.

“Bicycles and their accessories shall be of a type that is sold for use by anyone practising cycling as a sport. As a result of production imperatives (time constraints), an exception may be requested from the UCI for equipment that is a final product and that will be marketed in the nine months after its first use in competition. The manufacturer must however publish information on the equipment in question in advance and announce the date of its market launch. The use of equipment designed especially for the attainment of a particular performance (record or other) shall be not authorised.”

If we can take him for his word, we know one rider who won't be on big wheels is Aaron Gwin. In his excellent podcast, Shawn Spomer asked Aaron directly about 29ers. This was Gwin's reply; "I'm hearing rumours that guys are testing them and liking them. I personally have never ridden one. At this point my plan is to ride my bike as it is for the whole season, but if someone comes out and smokes everybody at the first race on a 29er I guess we'd have to take a look at it."

Love them or hate them, 29ers are going to make the first World Cup of the year even more interesting.

What follows is a press release from Santa Cruz

It's true. There's a 29er V10, and the Syndicate will be racing it this weekend at Lourdes. Although the move to 29-inch wheels has been riling comments sections and forums for months (#26isdefinitelydeadnow), the writing's on the wall. Tracks are faster, times are tighter, and eking another second out of a 4-minute track can be the difference between a World Cup win and missing the podium entirely. Keeping the Syndicate in the hunt every season takes a ton of time and energy, but downhill racing is not only the most exciting racing going, it's also where new products and technology are tested to their limit.

It comes as no surprise that Greg Minnaar was the driving force behind this project. "I raced the Hightower at the Enduro World Series in Finale Ligure, Italy, last October, and it just held so much speed," explains Greg. "That's when I knew we had to come back to the 29er V10 idea." 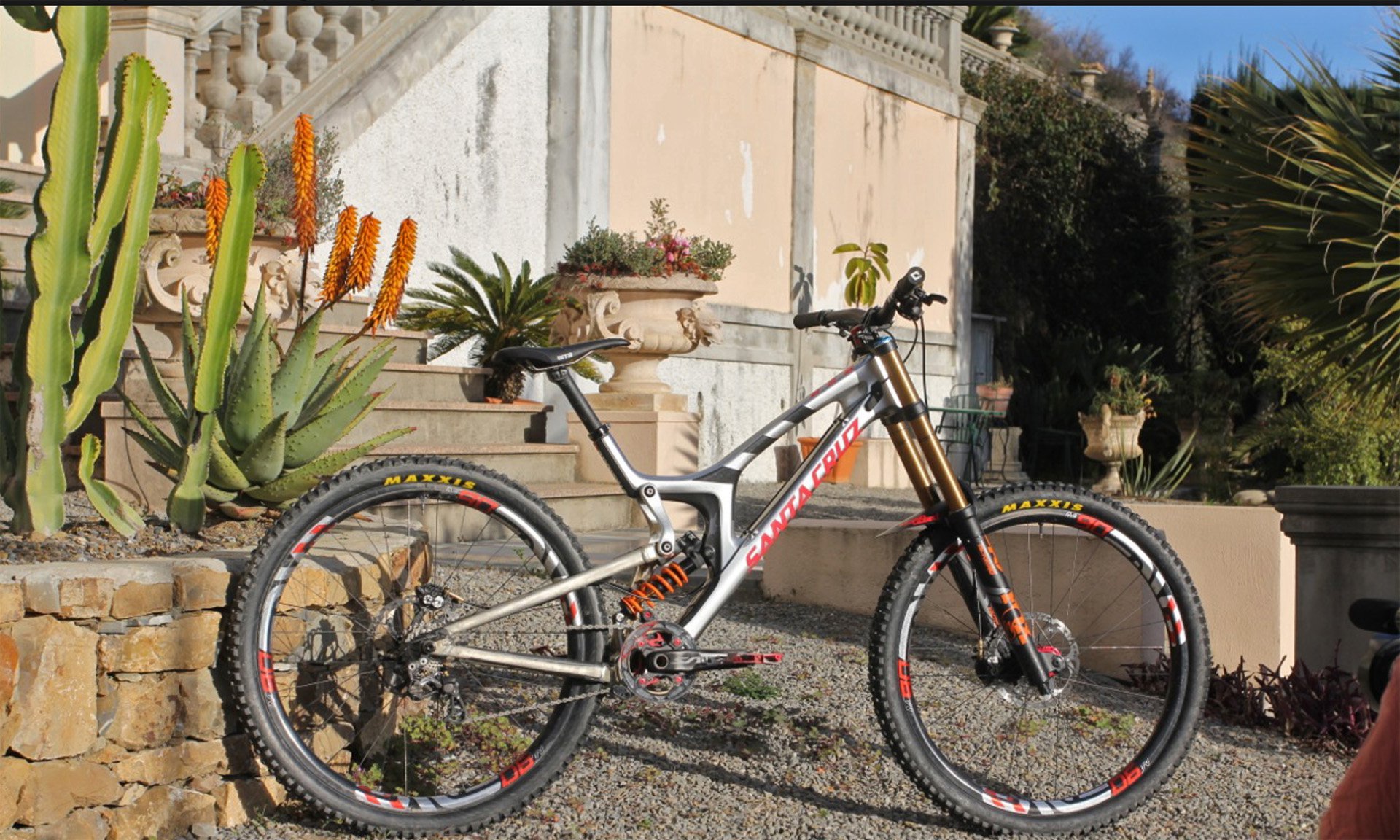 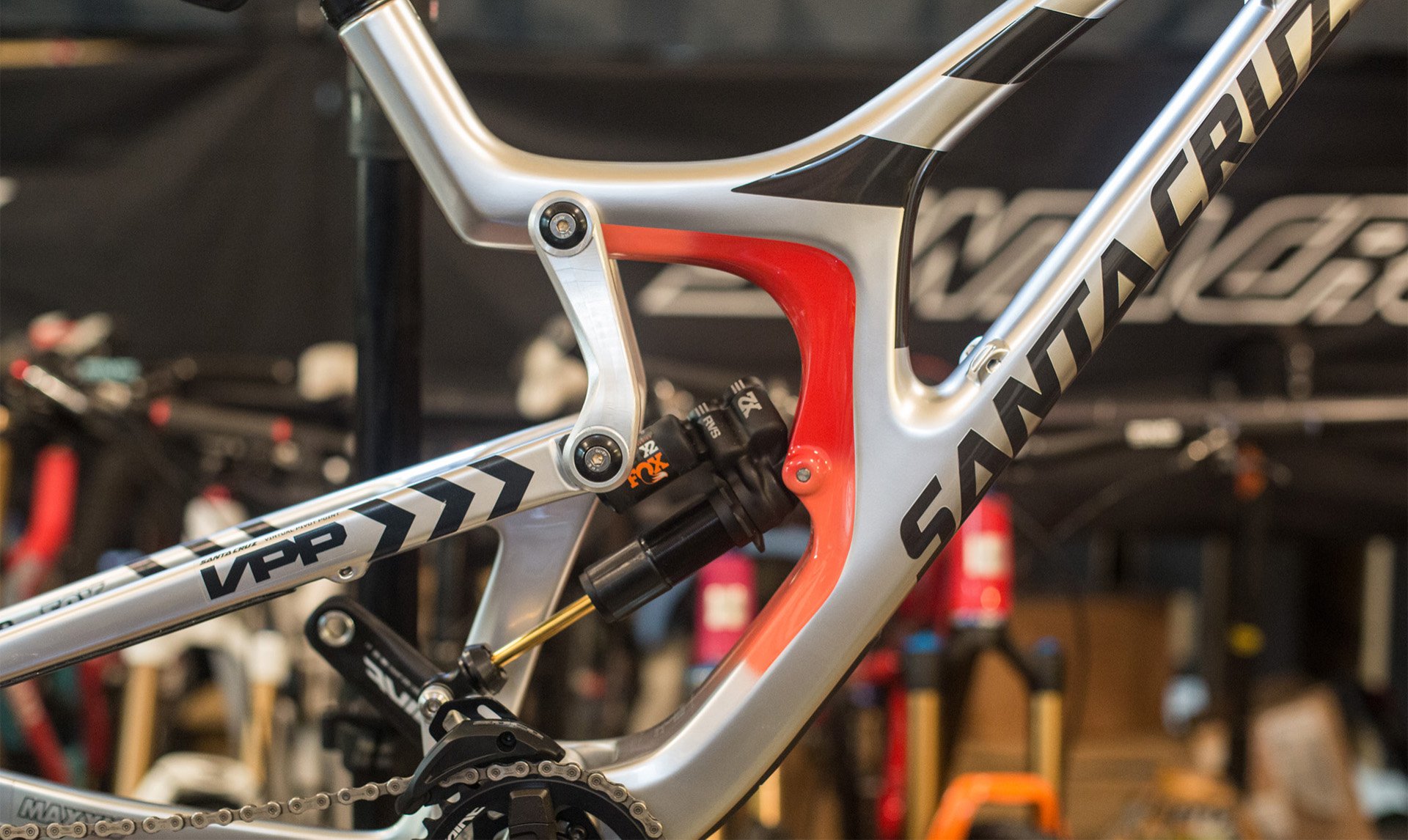 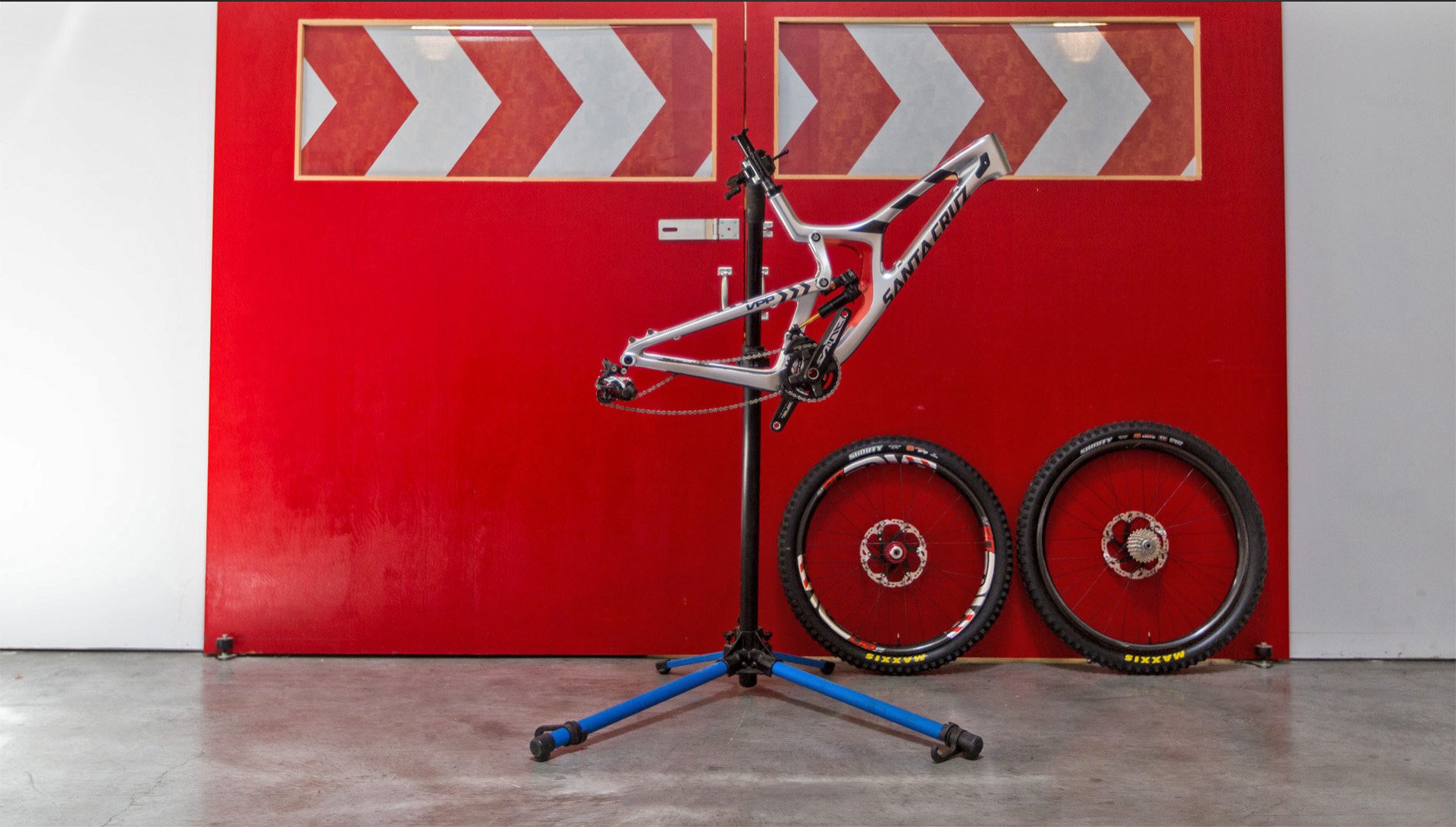 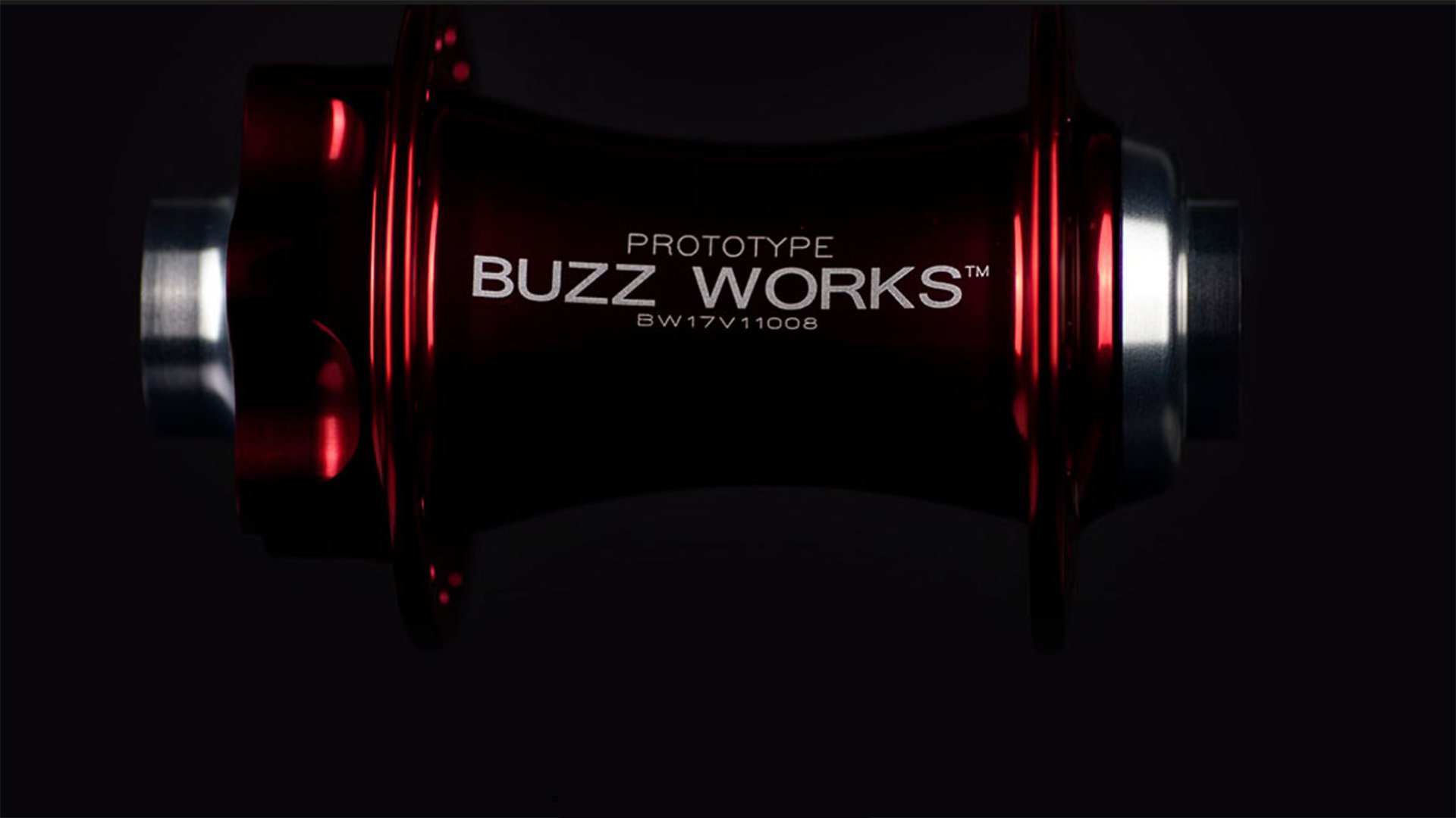 Jason Marsh, Greg's mechanic, points out that, "We'd looked at doing a 29er V10 a few years ago, but the fork options available at the time wouldn't stand up to World Cup racing. Greg's experience in Finale got the project off the shelf and back into development. FOX gave us a critical piece of the puzzle when they delivered a prototype 40 for us to test on a modified Hightower. Our first test session aboard that Hightower showed consistently faster times on the bigger wheels, we all decided we had to go for it. Then the real work began. We machined a few different sets of links, welded up three aluminum swingarms, and did more testing. As the riders got on terms with the new bikes, they got even faster. We played with linkages and shocks to achieve different angles, travel, and leverage ratios until Greg felt happy with setting everything in stone."

But ideas don't get set in stone around here. They get set in carbon. And in order to race a carbon bike at Lourdes, we needed to start manufacturing by mid-January. Nick Anderson, our head engineer, finished the design in early January and sent it to our carbon factory to get the tooling machined. "We're fortunate enough to co-own our own carbon manufacturing facility in China, which gives us bandwidth to indulge in this kind of project," Nick says, "I don't think it would have been possible without this kind of partnership."

"While the manufacturing was spinning up, we sat down with the Syndicate partners to make sure we could get the bits we needed by late March or early April." says Nick. "Fox had race-ready forks in the pipeline, and ENVE was on board to build some 29-inch M90s. Maxxis delivered bigger versions of the Syndicate's preferred tires, and Chris King's Buzzworks group whipped up some custom headsets to bring the geometry in line. It sounds simple enough, but the reality was anything but. The upshot is that, thanks to everyone's ability to move quickly on product development, we were able to go from frame concept to race-ready bike over just a couple months, with a few weeks left over for final testing." In one particular case, a technological leap by one manufacturer forced a quick counter by another. Fox altered the brake mount location on the 40's lowers to accommodate ‘Boost' flange spacing, which meant a standard 20x110mm DH hub wouldn't work—Chris King machined a one-off design they call ISO-AB (Asymmetric Boost) to get everything in sync.

Although it seems like the new race bike is a radical departure, the intent is the same as it ever was. Every iteration of the V10 was built to be faster than the one that came before, and the results began to speak for themselves during testing, to the disbelief of one of the new recruits.

"Greg practically forced me to try the bike" reveals Loris Vergier. "I tried it once in testing, but went straight back to my original 27.5 inch bike because that's what felt fastest across the length of the test track. But Greg insisted I give the 29er another shot. So I did, and I felt like it was still slower. The clocks don't lie though, and I was consistently posting quicker times on the new bike compared to the old—and this was on my local track! That's when I realized the new bike was deceptively quick."

"I was consistently posting quicker times on the new bike compared to the old—and this was on my local track!" Loris Vergier 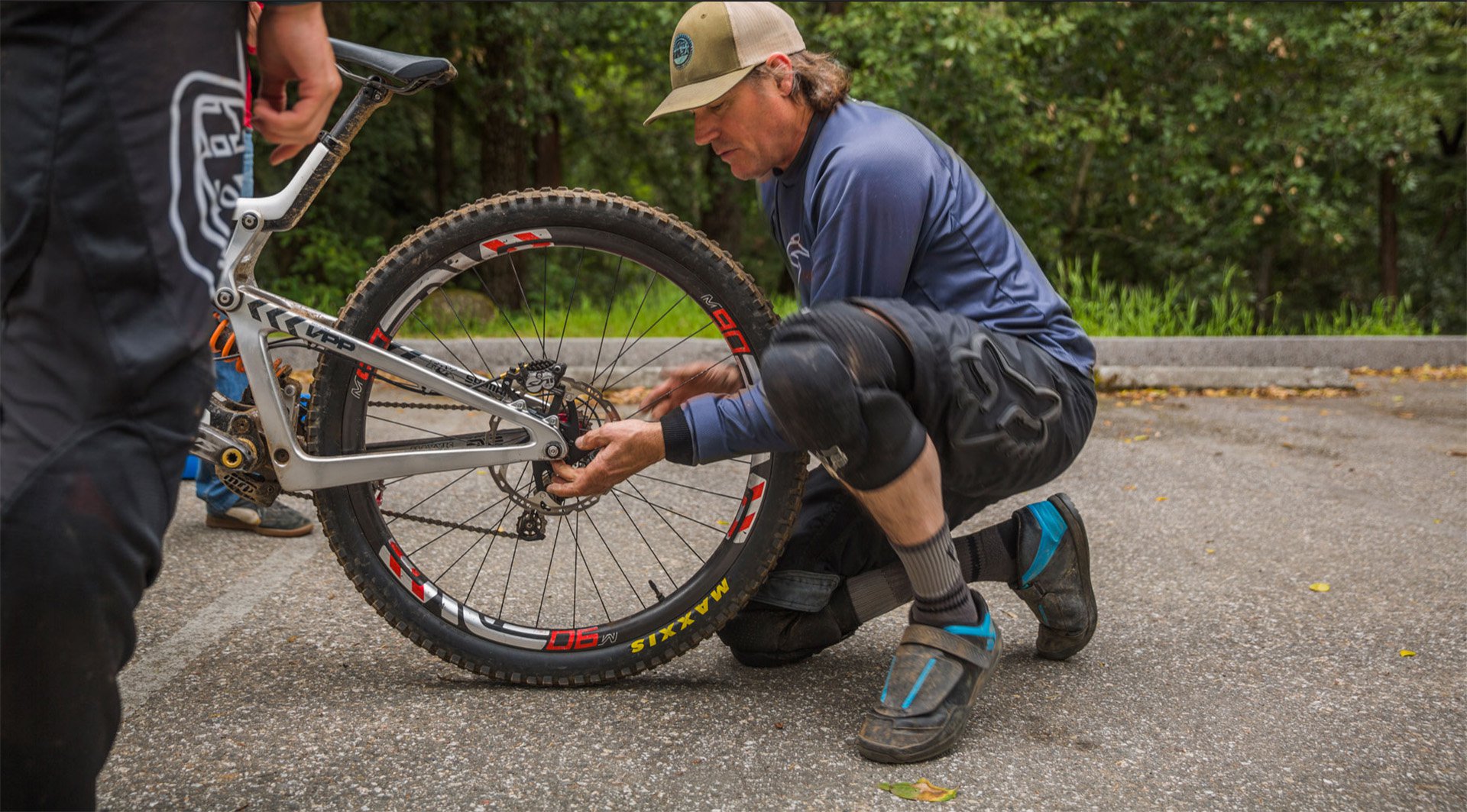 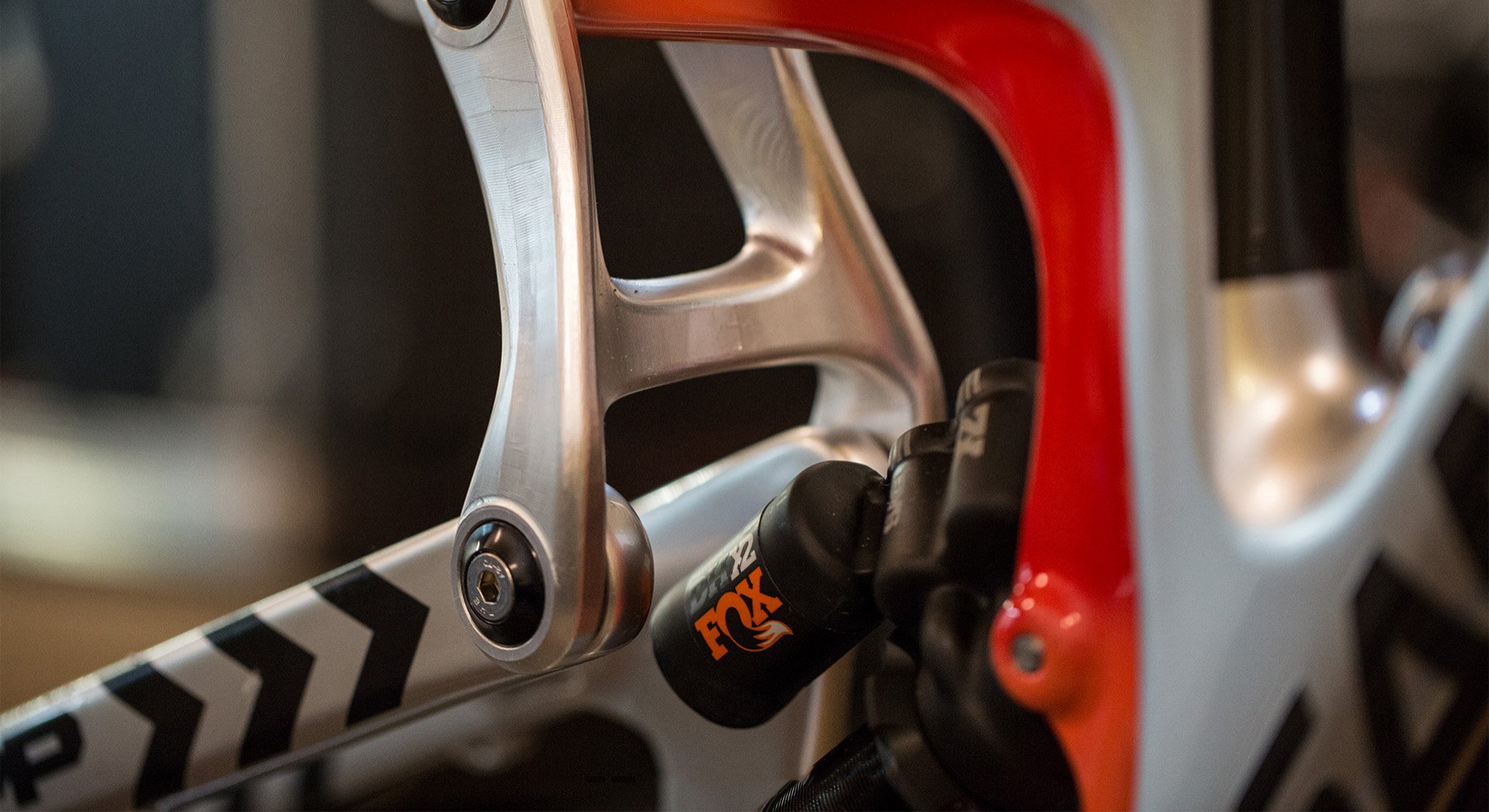 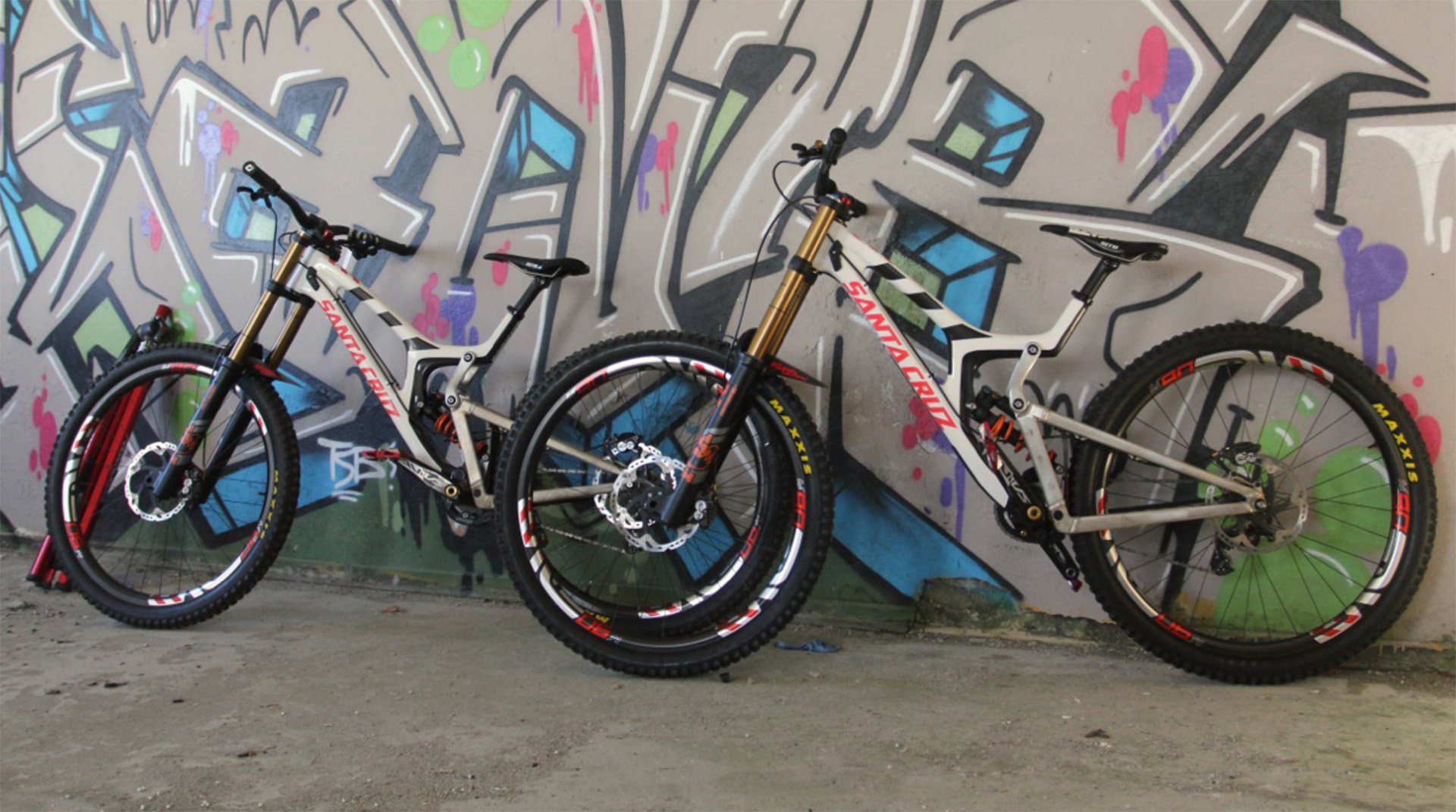 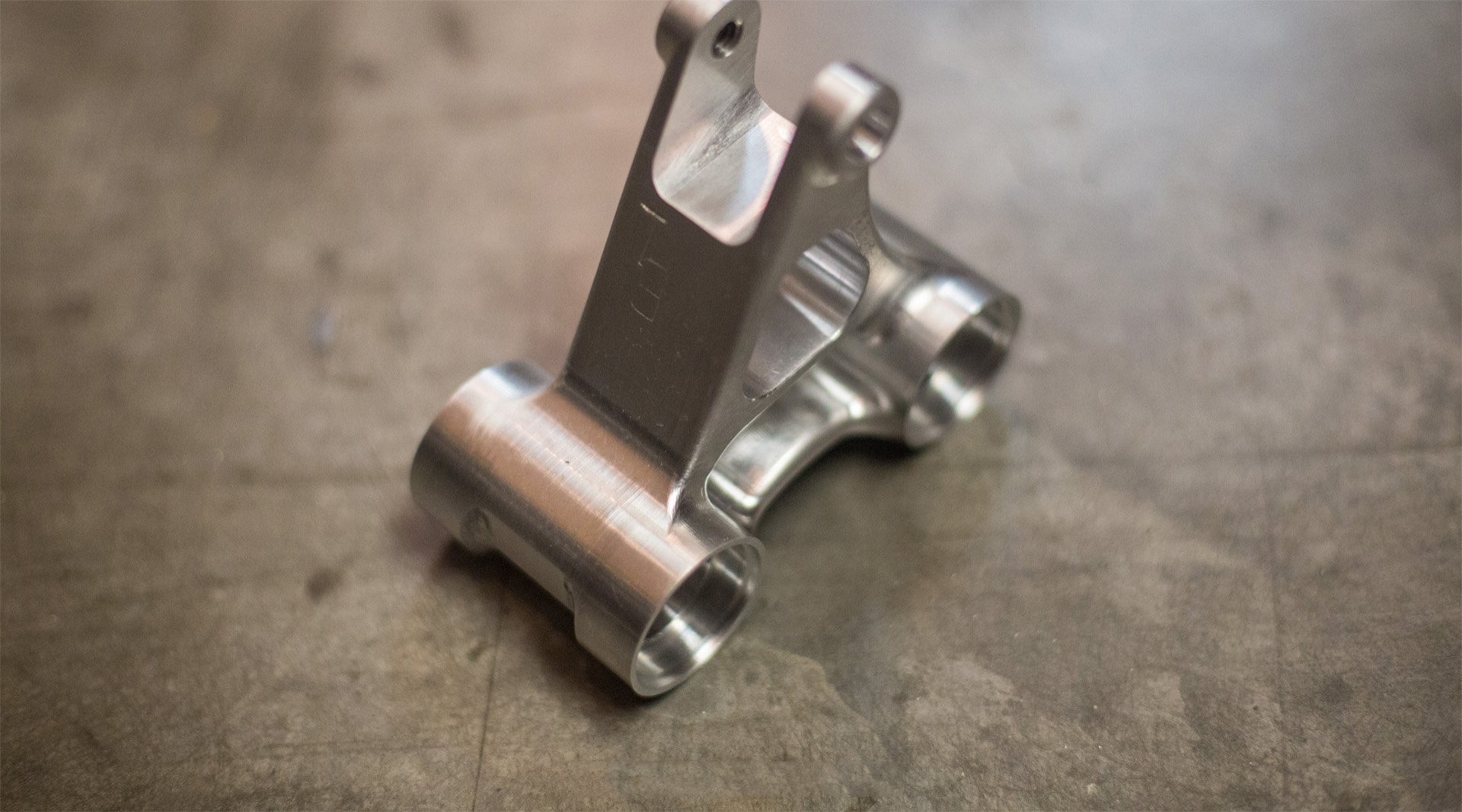 In contrast, Luca Shaw took straight to it. "Psychologically I think it really helped that the bike already looked refined, straight off the bat" says Luca. "The swingarm and links are custom, and they're mated to a production V10 front triangle. Loris and I are riding bikes with 190mm of travel, and Greg's got 210 because the XXL frame has more room."

While the guys were testing, Nick was working through the final pieces of the puzzle. "We needed to sit the bike into the travel to compensate for the BB height change created by the larger wheel diameter, and the guys at Chris King were able to make us a Buzzworks headset that then corrected the resulting change to the head angle" he says, "We also had to reduce the travel to maintain tire clearance at bottom out, which then meant we had to change the shock rate progression to maintain good suspension feel. The leverage curve is similar to the existing V10, but the leverage ratios have been modified slightly." Expect links and headsets to change over the course of the season as the riders keep working toward their ideal setups.

The V10 has racked up more World Cup wins than any downhill bike in history. It was the first full carbon fiber bike to win a World Cup, and ironically it was also the last 26-inch bike to win a one too. So where does that leave 27.5"?

It's still early days for 29-inch wheels in downhill and there will always be "horses for courses." At the end of the day, we want to win races. So if any of our riders feel more comfortable in particular conditions or on certain courses with 27.5" wheels that's what they'll ride. Greg, Luca, and Loris are riding the new bike in Lourdes on April 30th because that's what they feel most confident on. The V10 has always been about pushing technology in pursuit of speed, and we're simply continuing that tradition today. The new bike is another leap forward in the progression of carbon downhill bikes and we're excited to be leading the charge.

So for now it looks like a standard V10 front triangle with an alloy rear end. I hope that if this goes to production they update the XXL sizing. The fact that Peat and Minnaar (both around 6'3") need a special headset to get the length they need from an XXL maybe these bikes need to be longer? Either way it'll be cool to see how this plays out. Horses for courses for sure.

Mondraker will probably be the only one without that problem. Also, hopefully this will mean the possibility of a Foxy29 our Dune29

According to the article on PB, the rear ends are going to be carbon as well for this weekends race in Lourdes.  Guess they had enough time to test the alloy ones, decide on what they liked, and get carbon ones whipped up fast!.

IIRC, Peaty was running his Buzzworks headset in reverse to reduce the reach.

Looks like I want to buy a Santa Cruz bike now :P