WHISTLER, BC March 25, 2009 – After celebrating a year of milestones in 2008 including more than 800,000 webcast and online content views; the first-ever double backflip at a North American mountain bike competition; the birth of the Giant Slalom and the VW Trick Showdown, Kokanee Crankworx is ready to blow the lid off in 2009. 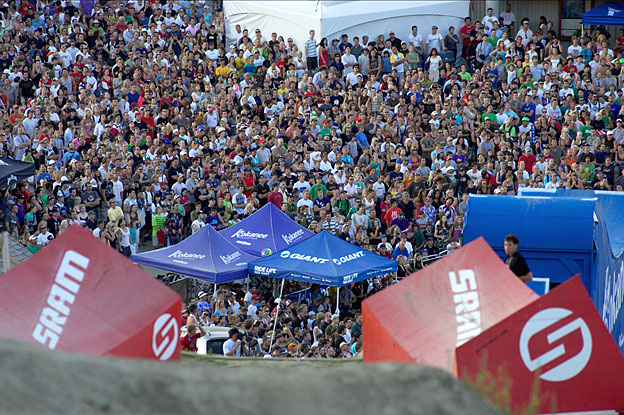 I don’t recall ever seeing this many people shoe-horned into the Whistler Village. Photo ~ David Ferguson

“Every year it gets harder to raise the bar but we are confident that we have developed an incredible line-up for this year,” says Jeremy Roche, Kokanee Crankworx General Manager. “We are fortunate to be able to tap into so many key industry insiders who help ensure we keep our events fresh and relevant to the ever-changing mountain bike fraternity.”

Kokanee Crankworx 2009 will take place August 8-16 in Whistler, B.C. As always, the Festival will provide events for all ages and abilities. “One of the hallmarks of Kokanee Crankworx is the opportunity for all levels of riders to enter events and compete on courses with some of the best pros from around the world,” says Roche. This year will be no exception with eleven events over nine days open to recreational riders and pros alike. 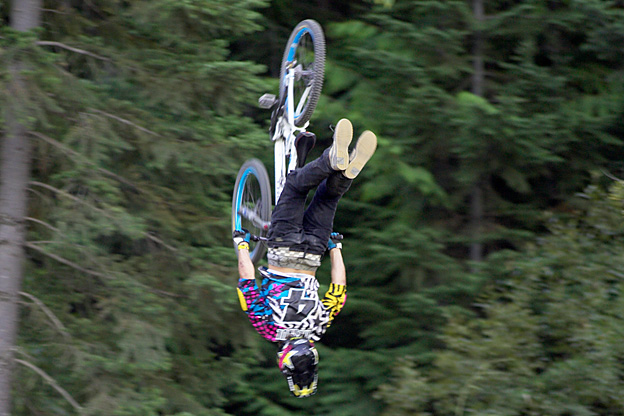 A hot new event this year is the Canadian Open Enduro taking place on Saturday, August 15. The Enduro combines the best elements of downhill and x-country to create a hybrid event that showcases true all-mountain riders. It will begin with a mass start, by categories, on the upper reaches of Whistler Mountain and will follow a course featuring some of the Whistler Mountain Bike Park’s best all-mountain trails. The total vertical descent will be in the range of 4,000 feet (1,210 meters) and the fastest times are expected to be over 25 minutes. Plans are for the course to be designed with input from the gurus of this emerging discipline including Mark Weir, Brian Lopes and Richie Schley.

The Canadian Open Enduro will be part of Kokanee Crankworx’s final weekend featuring the highly anticipated Monster Energy Slopestyle on Saturday night and the entire Festival will be capped off with the third running of the Canadian Open Downhill presented by Kona on Sunday, August 16th. 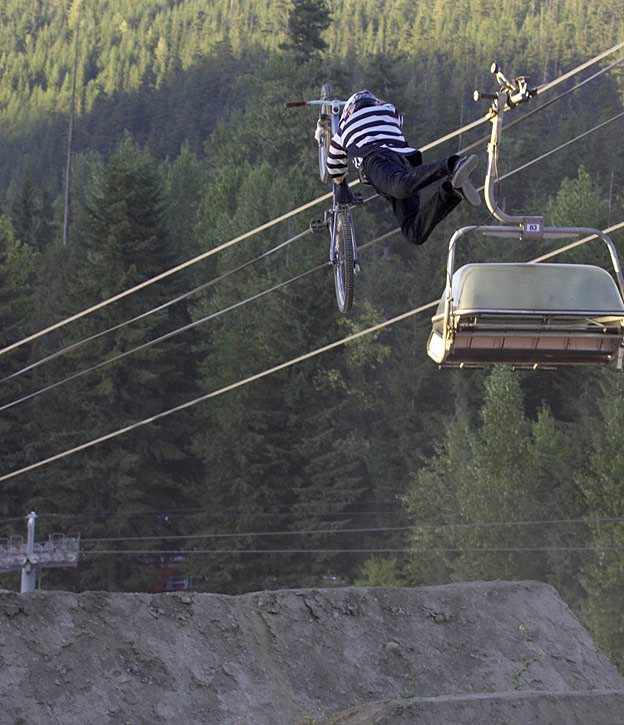 This year’s Monster Energy Slopestyle course will, once again, be built by legendary designer John Cowan who promises to create a completely redesigned course that will act as the stage for the most progressive riding by the best slopestyle athletes on the planet. The course will also be used for the VW Trick Showdown contest back for a second year on Thursday, August 13. Preliminary course layouts will be available shortly at crankworx.com.

The Dual Slalom will kick off the Festival on Saturday, August 8 and will also be take place on a brand new course. The next day the Monster Energy Garbanzo DH will continue to live up to its infamous reputation – challenging riders on one of the longest, most competitive downhills in the world.

WomenzWorx will return on Tuesday, August 11. A team of mountain biking’s most talented women are working to finalize a new event format which will be announced before the end of April.

Finally, the Air DH takes its familiar spot on the calendar on Wednesday, August 12. The question everyone will be asking is, can World Champion Brian Lopes three-peat? 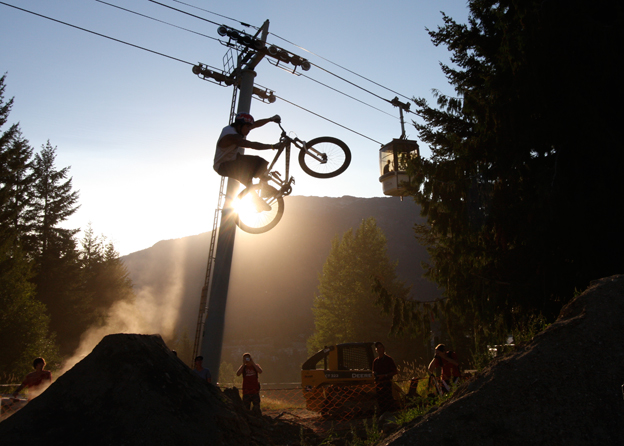 After landing the double the rest of Andreu’s run seemed like a celebration. Photo ~ Malcolm McClaws

Kokanee Crankworx’s action doesn’t stop with the athletics. A retooled nine-day downhill and x-country mountain bike Demo Zone, a village-wide expo and non-stop after-hours festivities will keep the pace high on and off the mountain. And don’t miss the 2nd annual Canadian Cheese Rolling Championships on Saturday, August 15th!

Shortly before the action hits Whistler, Crankworx Colorado will be back for the third year in Winter Park, Colorado. Featuring the final qualifier for Whistler’s Monster Energy Slopestyle, Crankworx Colorado is gaining stature as one of the best mountain bike events in the US and it will feature several new trails and features built in the Trestle Bike Park. 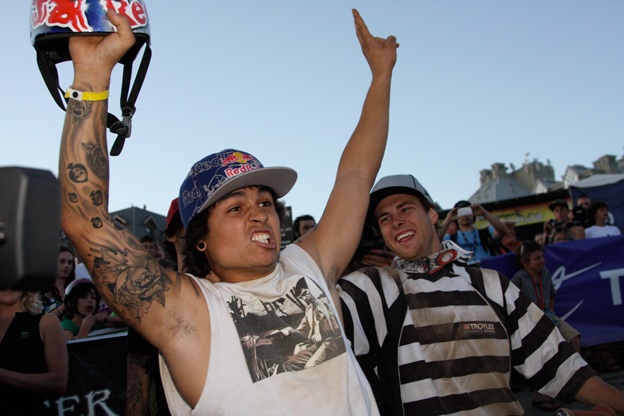 Andreu now has the cash to finish inking his left arm. Andreu took the time on his way to the airport to stop and see injured nsmb.com rider Justin Wyper. For that alone he deserves the win. Photo ~ Malcolm McLaws

Stay tuned to crankworx.com for upcoming news.
Kokanee Crankworx is presented by Whistler Blackcomb and the Whistler Mountain Bike Park. Whistler has the world’s most diverse offering of mountain biking terrain, attracting all disciplines of mountain biking. From 150 miles of single-track trails and 5,000 vertical feet of lift-accessed downhill runs in the Whistler Mountain Bike Park, to jump parks and the 20+ miles of paved Valley Trail, there’s something for every rider.

Consistently ranked as North America’s top ski and snowboard resort, Whistler Blackcomb elevates summer adventure to new heights. On-Mountain activities include high alpine hiking and sightseeing via the new PEAK 2 PEAK Gondola, epic riding in North America’s number one ranked lift-accessed mountain bike park, and summer skiing and riding on Blackcomb’s Horstman Glacier. In the valley, the family-friendly Adventure Zone at the base of Blackcomb provides a carnival-like experience for all ages. Located a scenic two-hour drive north of Vancouver up the spectacular Sea to Sky Highway, this four season resort is truly spectacular by nature. Check it out at www.whistlerblackcomb.com.