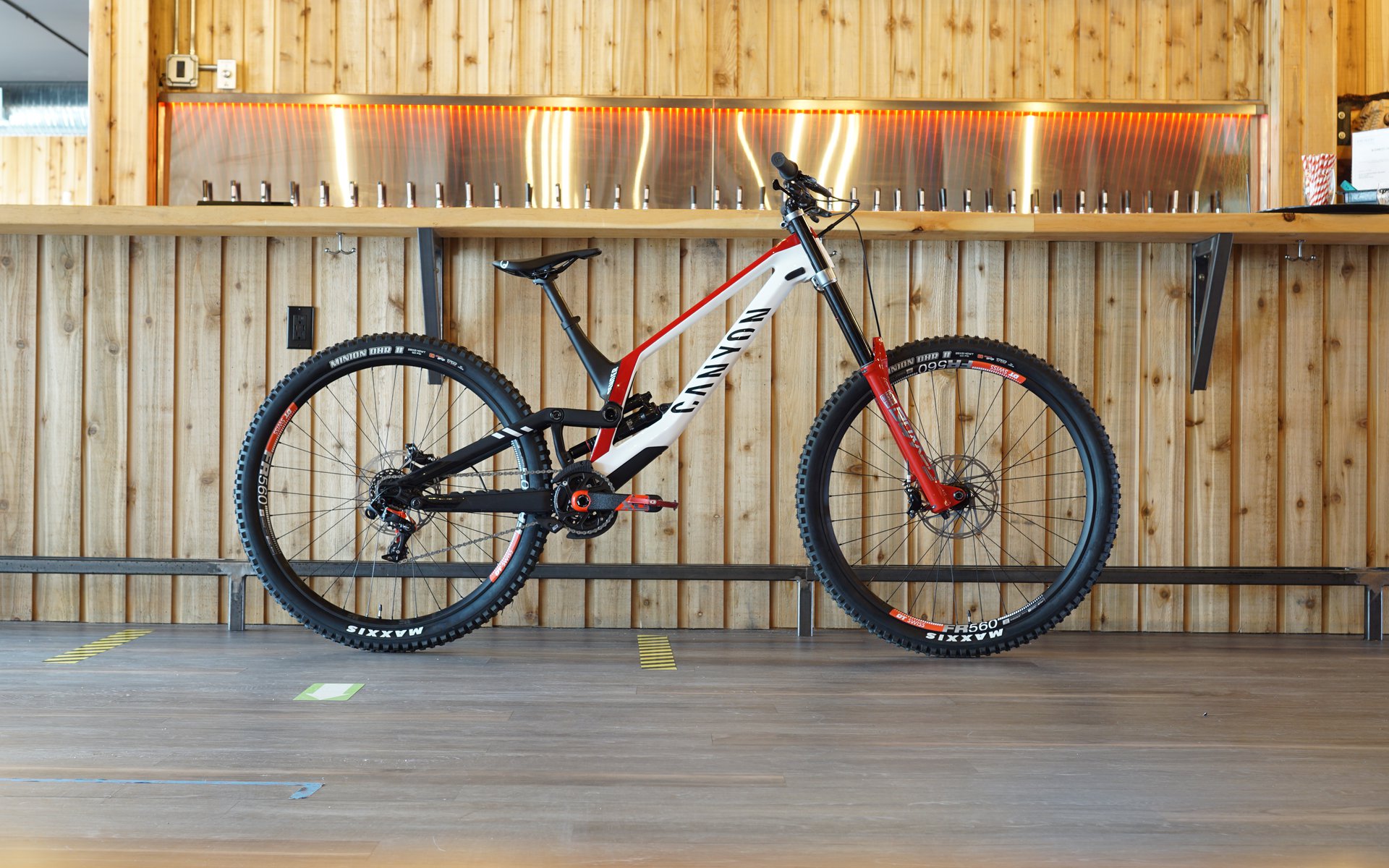 Canyon released the first Sender downhill bike in April 2016. Since then it's proved a handy downhill race bike that has racked up a tonne of success on World Cup tracks around the globe. Canyon set out to develop the new Sender with one goal: build the best race bike possible. That was the driving force behind everything Canyon did with the new Sender CFR. It’s a zero-compromises racing machine. 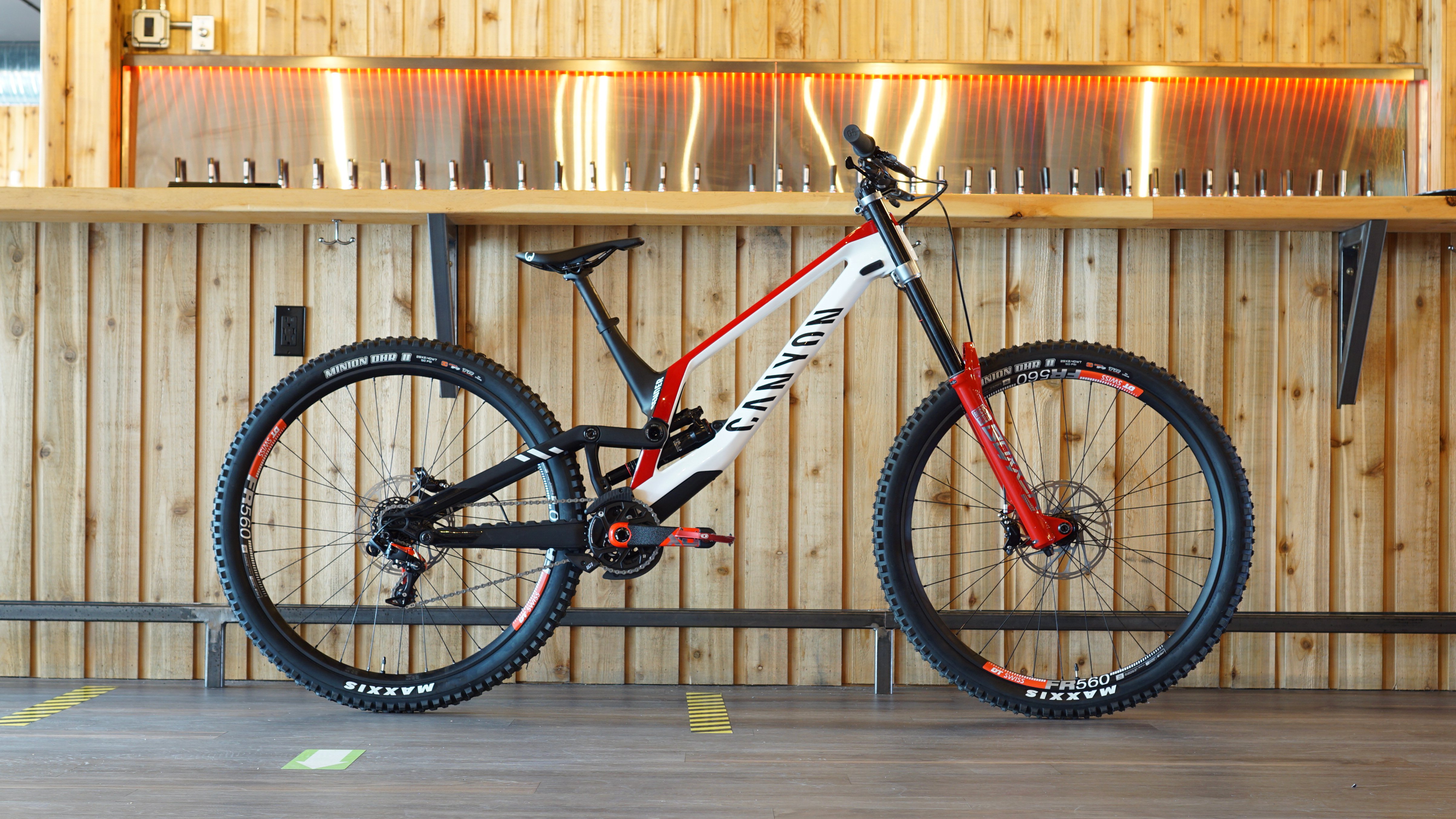 From far away the Sender CFR lends much of its design language and silhouette from the old Sender. I think that's a good thing, the old Sender was a beautiful bike. With Canyon's focus on speed they have implemented a number of changes for the new Sender CFR, which got its name from the significant involvement of CFR (Canyon Factory Racing). This is more than a marketing three-letter-acronym. The team was apparently involved in the development of the bike from carbon lay-up to the leverage curve, the suspension tune, and the Sender's geometry. Canyon wants us to know that the Sender CFR was born from competition. 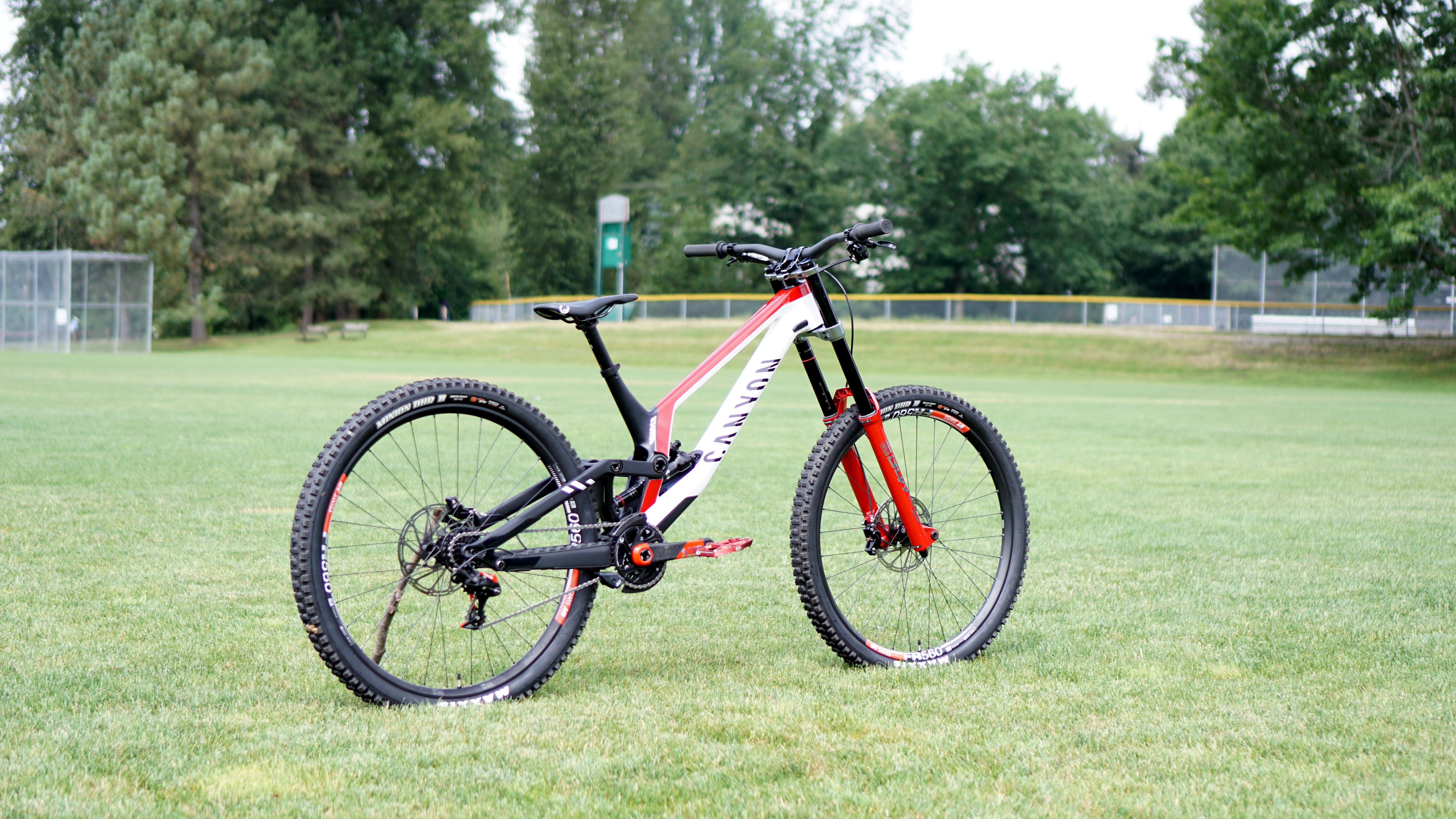 It's hard to take a bad picture of the Sender CFR, gorgeous from every angle.

Coleman's Notes on the Sender CFR 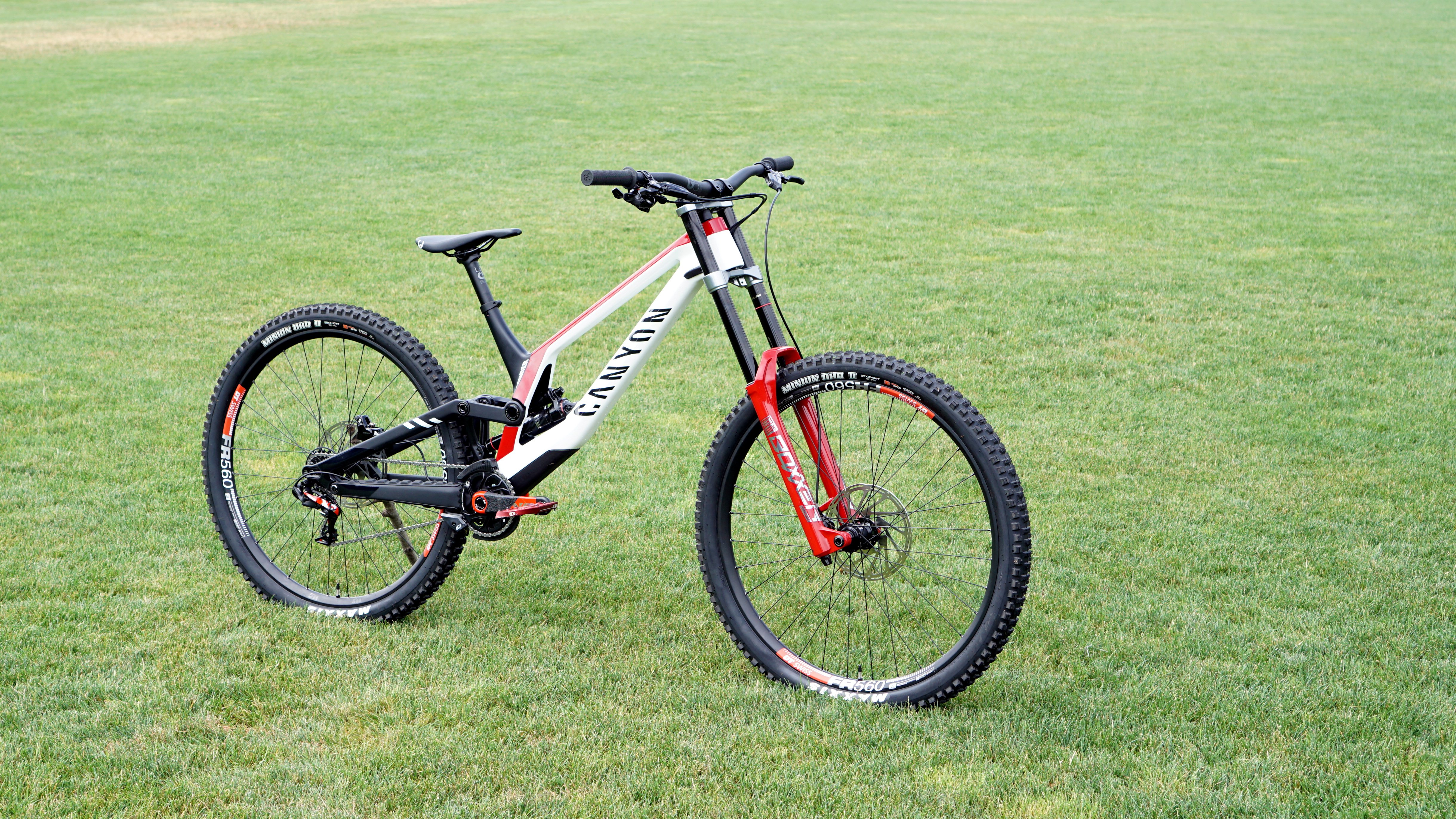 I love the red, white and black paint scheme.

The most obvious of these changes are the introduction of the big wheels and the longer wheelbase. With World Cup DH courses getting faster and more open this makes sense. Canyon also pulled 600 grams out of the frame by optimizing the first generation Sender, adding carbon seat and chain stays, and lowering the upper shock mount to the down tube. The linkage is more progressive with less pedal feedback. Adjustable geometry remains, which allows riders to alter reach and chainstay length. 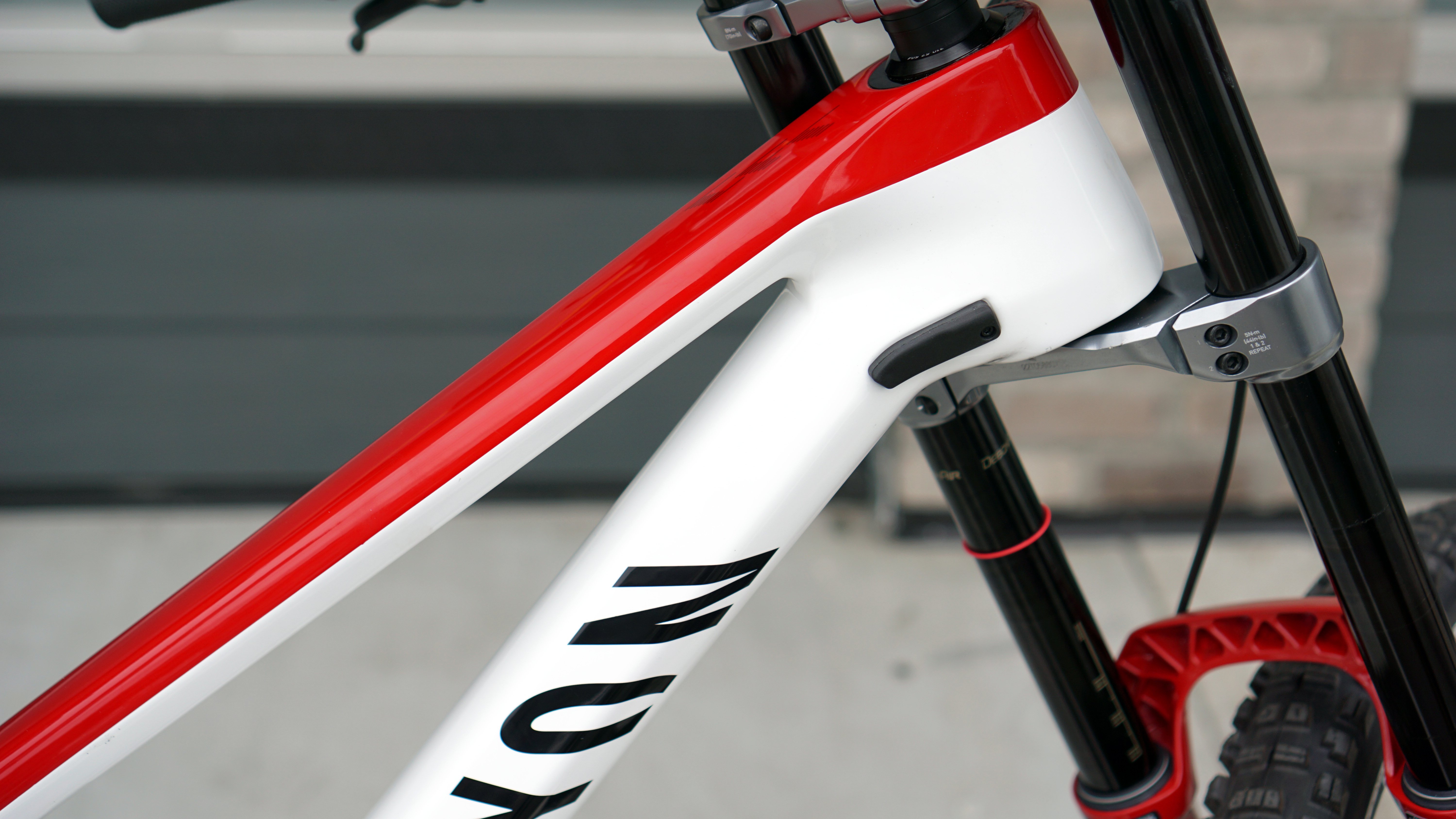 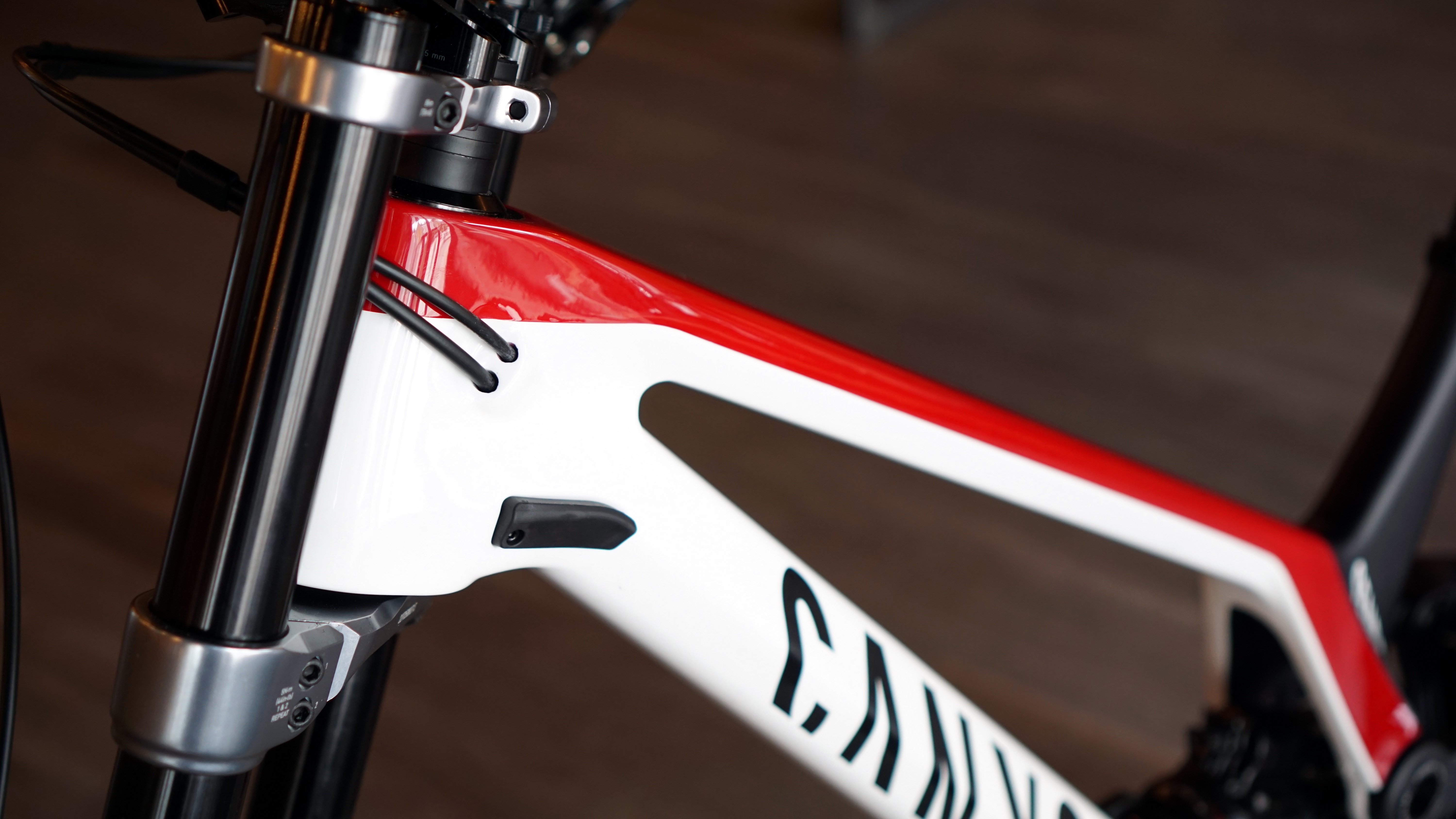 Not shabby from this side either.

The Sender CFR is available for purchase now. Currently only available in a carbon-framed complete with two build kits. There is no frame-only option at the moment. Unfortunately Canyon is not yet selling to Canada, but it is in the works, albeit with no defined time line. 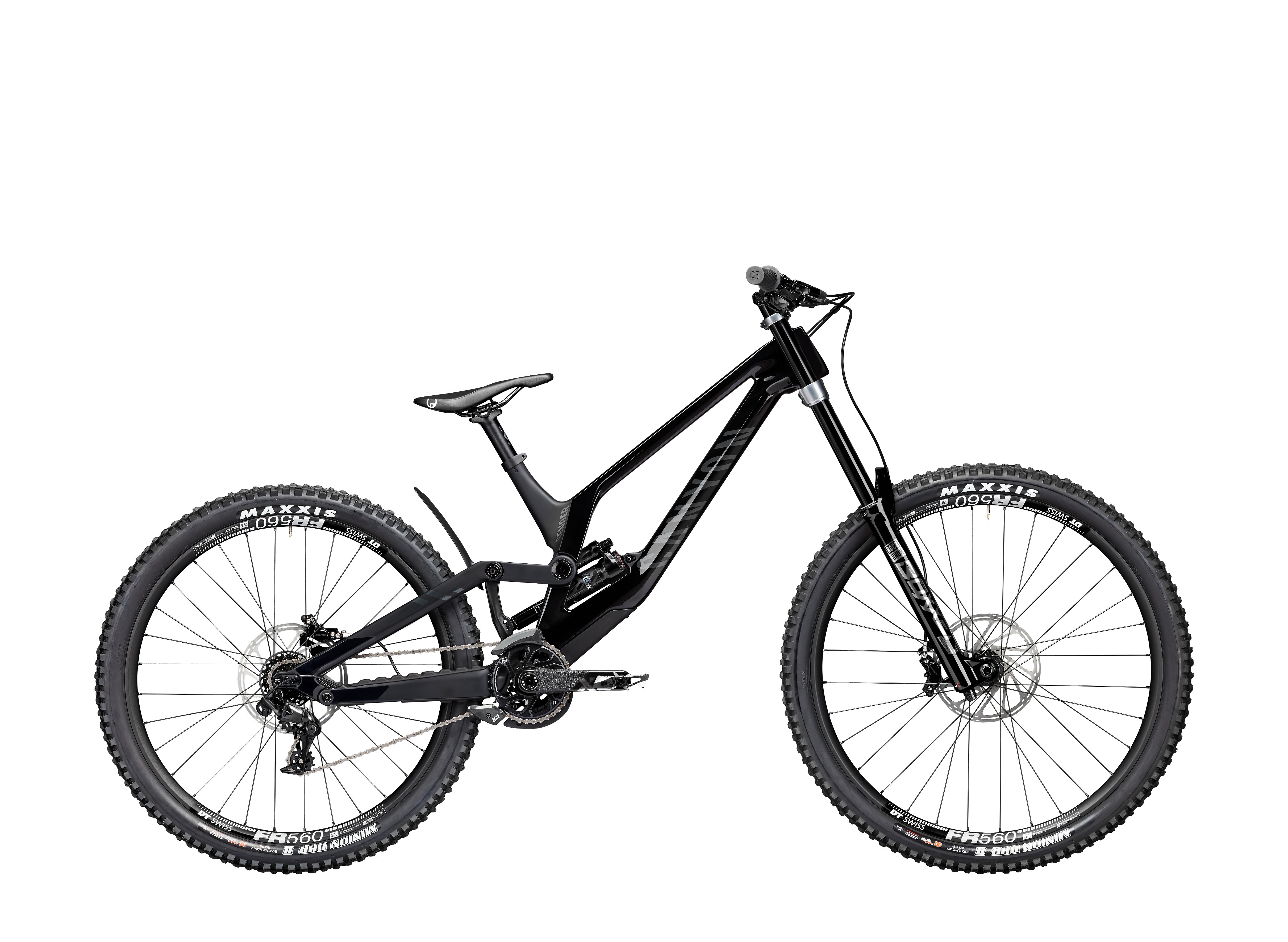 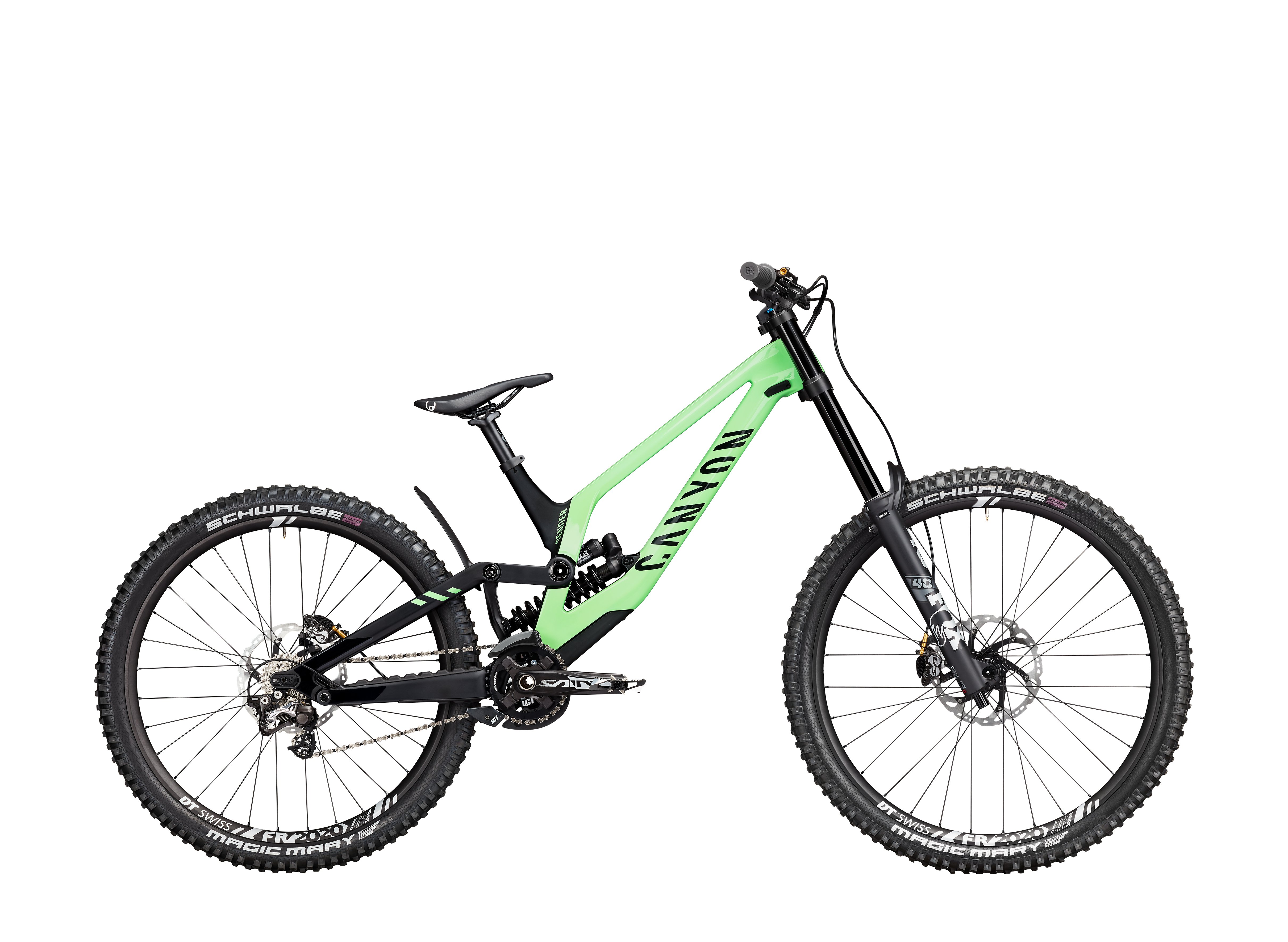 Canyon has taken an interesting approach with the new Sender with sizes Small and Medium getting a mixed-wheel 27.5" rear with a 29er front wheel. The size Large and X-Large get 29ers front and rear. I think this is an interesting solution that make a lot of sense. Vernon Felton from Canyon told me this decision was made because shorter riders were getting their butts buzzed by the bigger 29er rear wheel. The mixed wheel size offers the front end grip, easy rolling and stability of the 29er wheel, but removes the butt buzz issues. Smart! 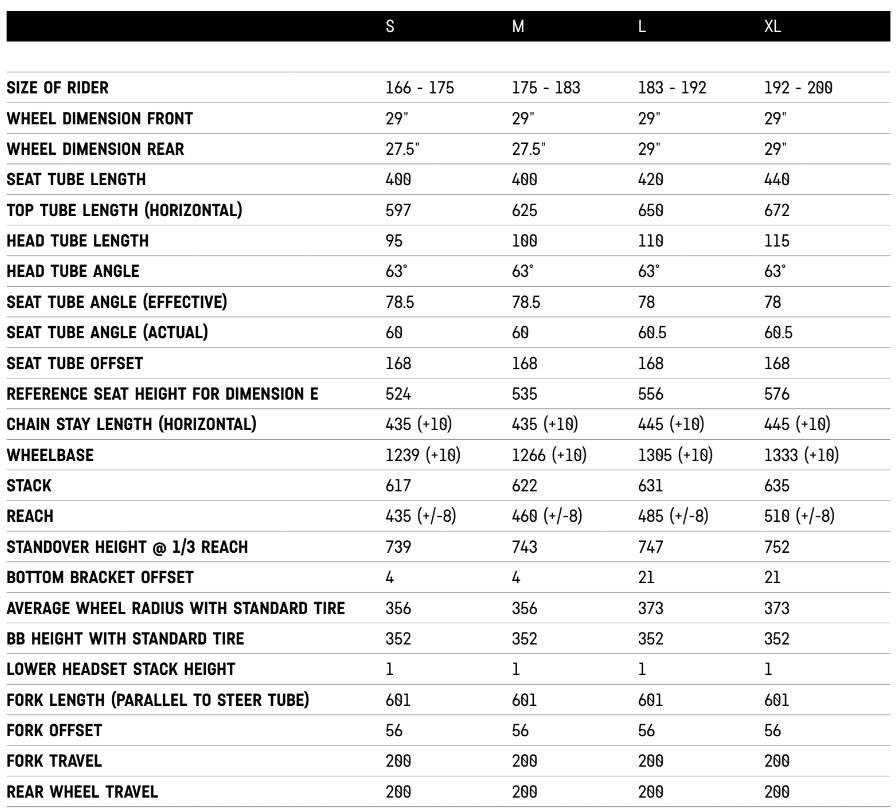 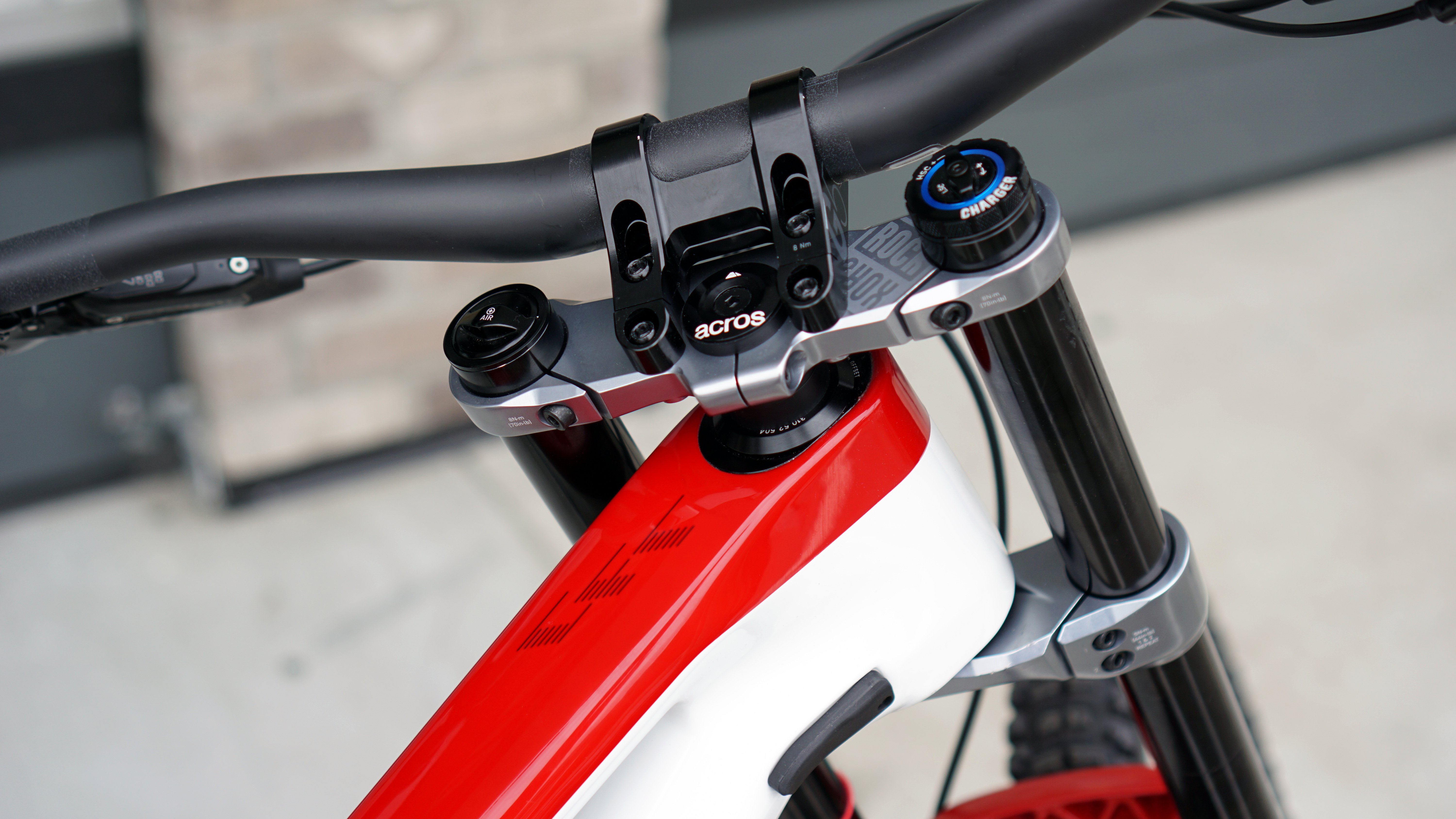 The black oval piece can be reversed to alter the reach of the front triangle. 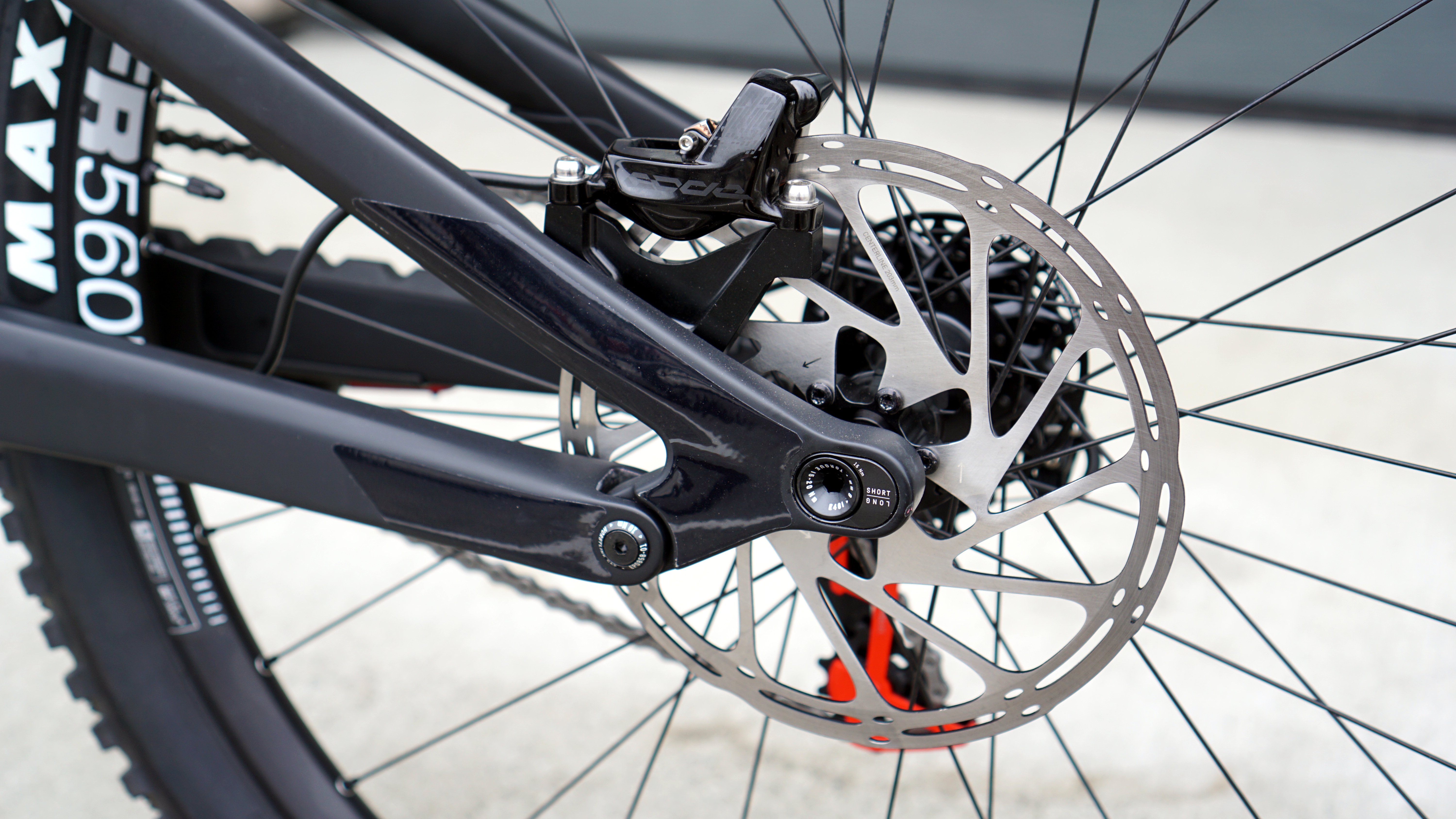 Adjustable rear center thanks to flip chips at the drop out. 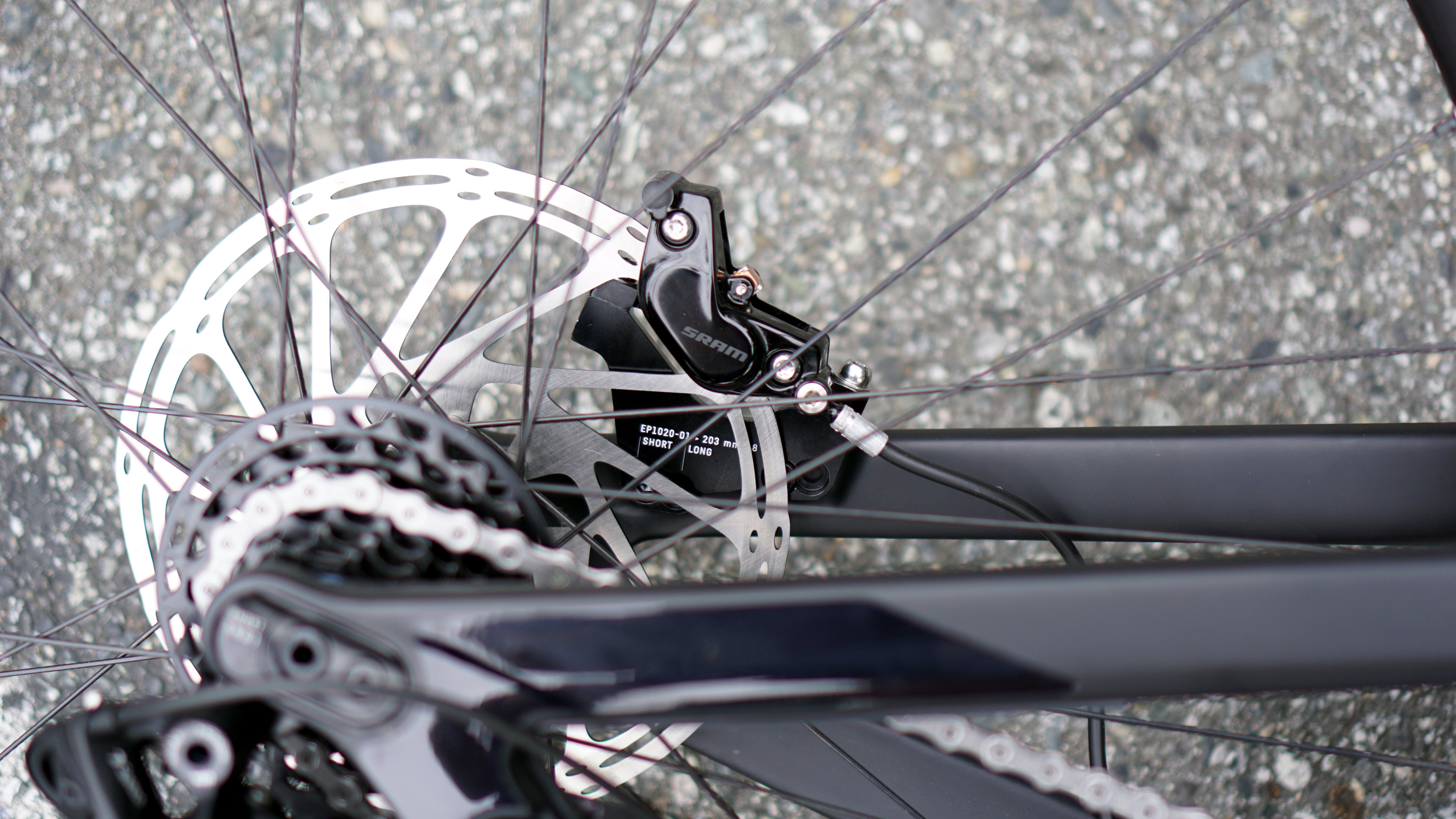 Suspension kinematics on the Sender CFR have apparently changed in two main ways. The Sender CFR is said to be a little more progressive than the existing model and to give less pedal feedback. I was told Canyon moved the pivots around to reduce pedal feedback, which also resulted in a less rearward axle path. I haven't ridden the old Sender, but I suspect this will make the new Sender feel a bit more sporty and snappy, but with the compromise that it might not eat square bumps quite as well as the old model. So some testing is required *rubs hands together* ...

Suspension comparison of the new Sender CFR vs. the old Sender. 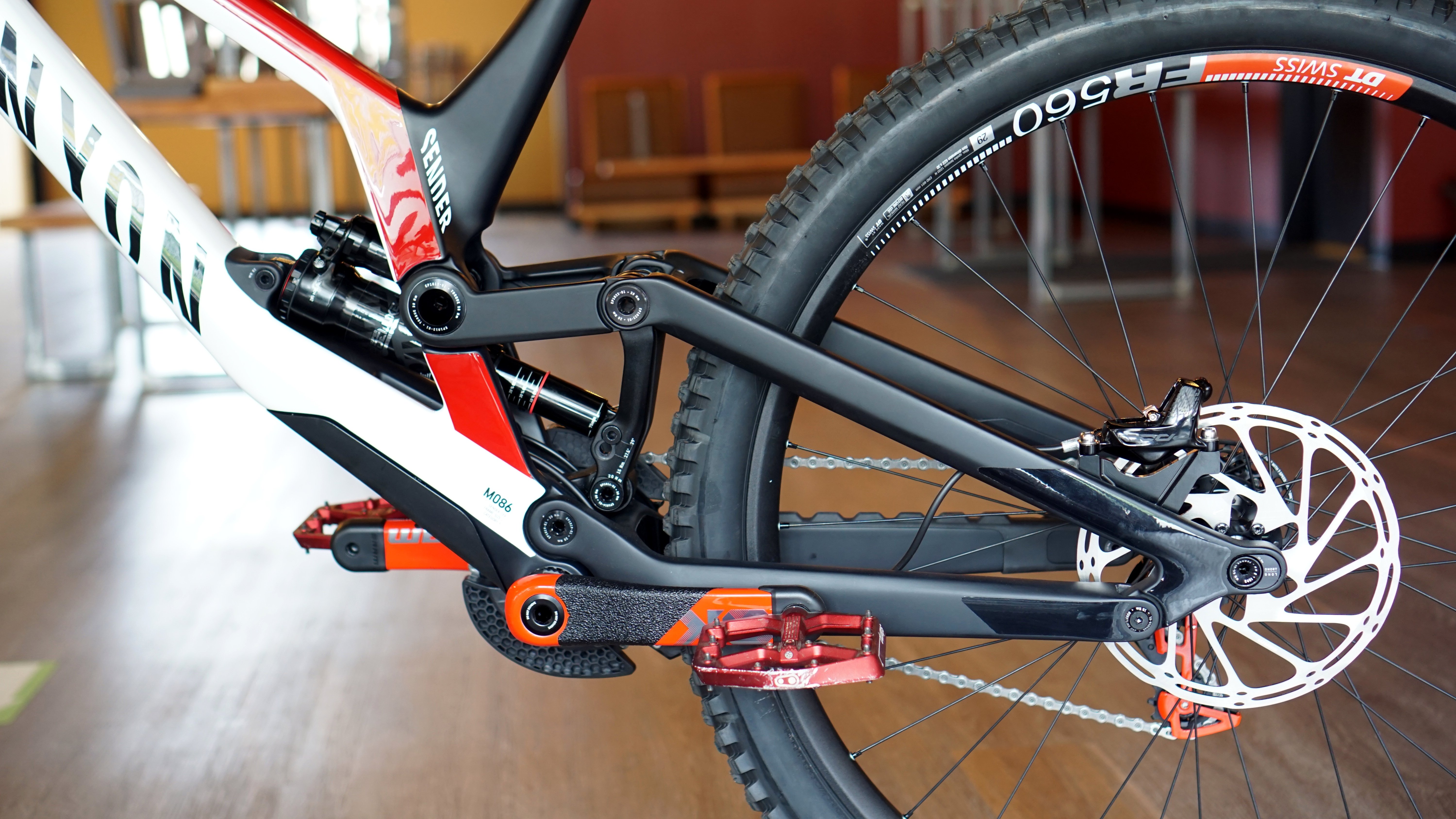 The Sender CFR is still an MX-Link-driven Horst bike. But Canyon has pulled the Horst Pivot up, and pushed the main pivot down to reduce the pedal feed-back.

A world class DH bike shouldn’t sound like a box full of bolts being tossed down the mountainside. Canyon told me the bike was designed to run silently. Over-the-top chainstay protection, ample clearance between chain and chainstay, and rattle-free, internal cable routing keep noise to an absolute minimum so you can focus on the trail. Canyon's World Cup race mechanics were apparently involved in designing a bike that is simple to work on and will endure years of hard racing. Double-sealed bearings, replaceable thread inserts, fully integrated, internal cable guides, and easily accessed pivots are just a few of the smart features inspired by Canyon's team mechanics’ years of wrenching in the pits. 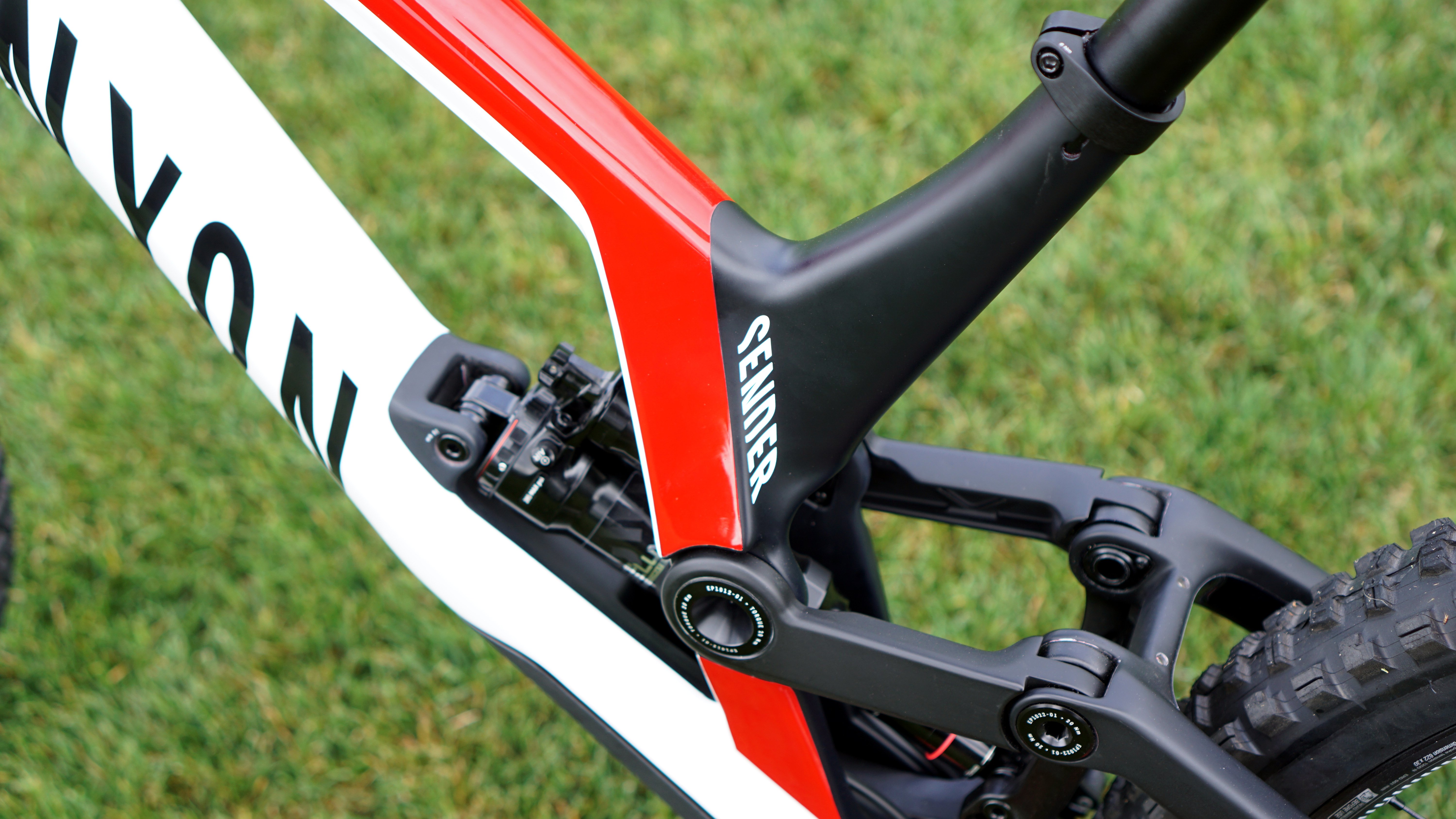 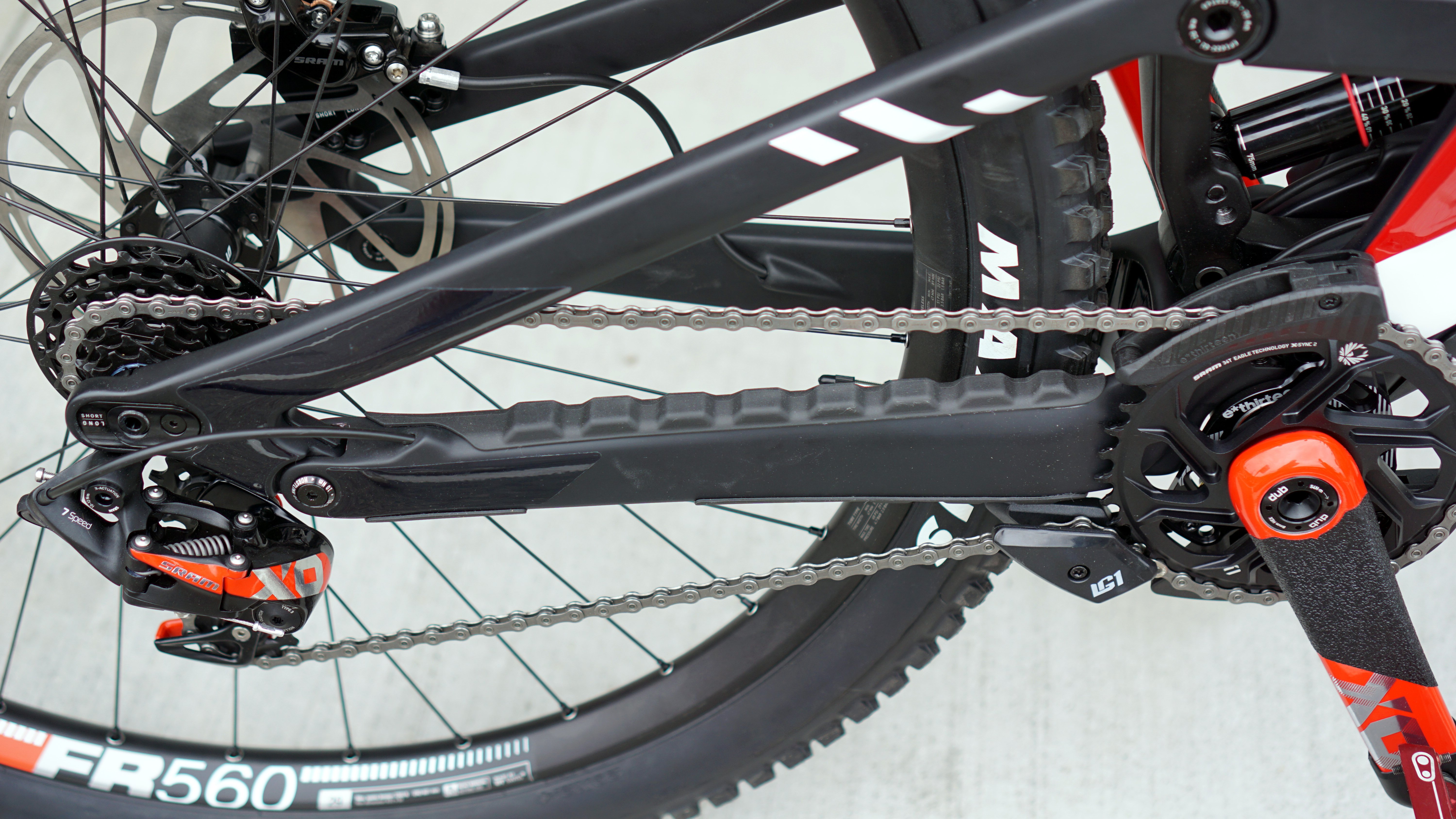 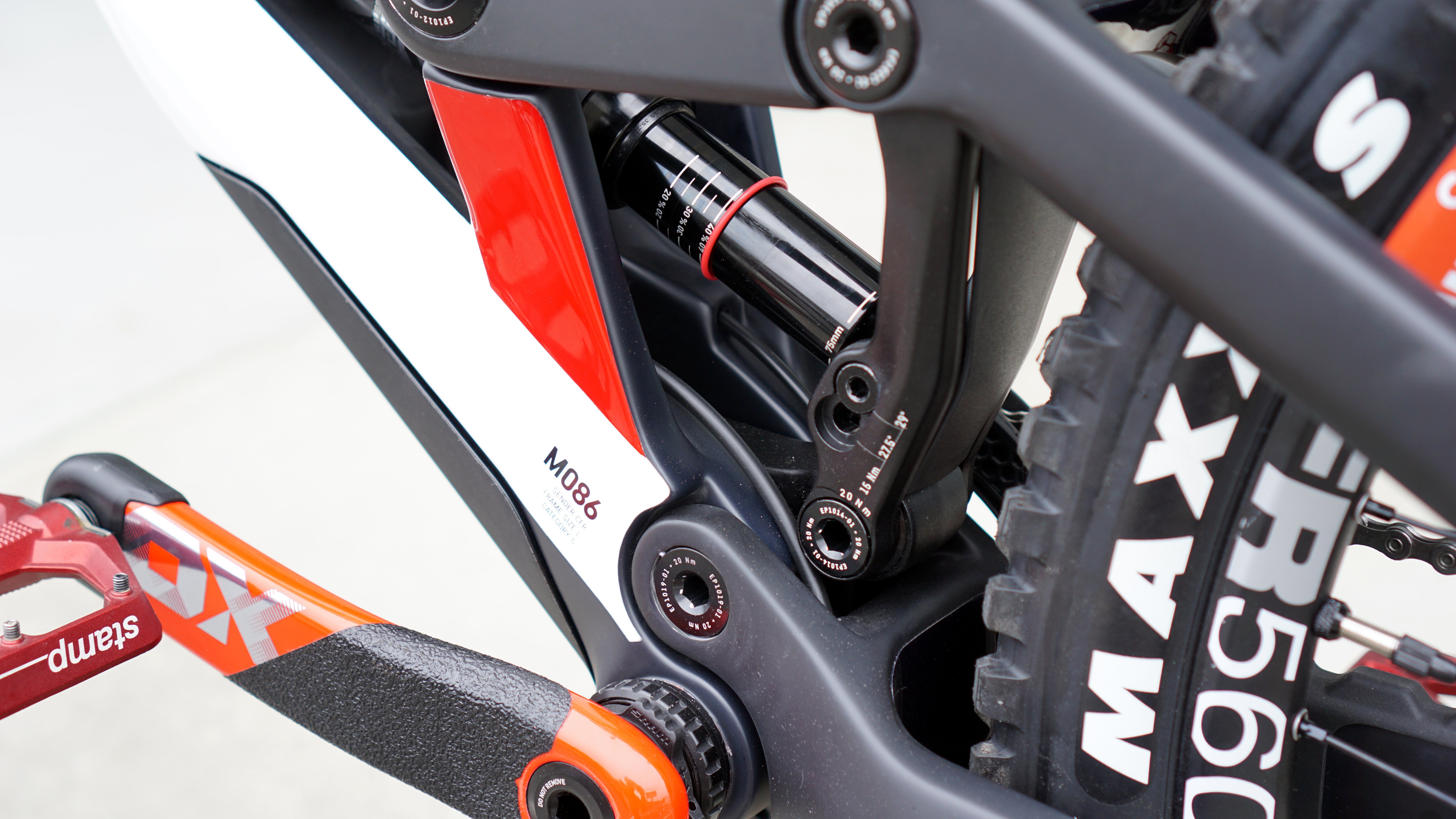 Slick cable routing through out the frame. 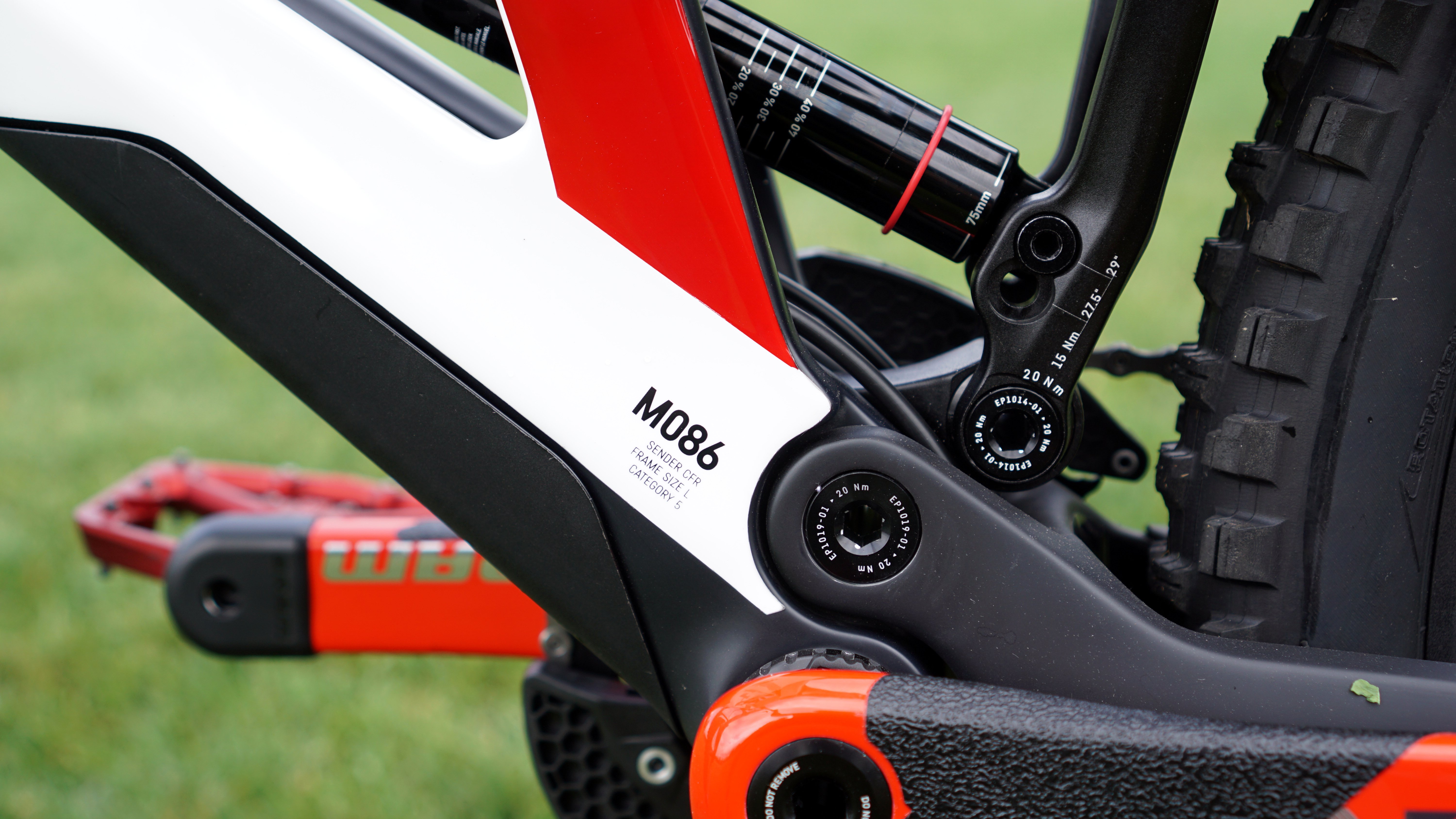 The rocker is common between the sizes on the bike. The printing is a bit misleading; you can't just slap a 27.5 rear wheel on this bike and move the shock bolt, because this would negatively alter the suspension function and bike geometry. Otherwise I appreciated all the torque specifications marked on the hardware. 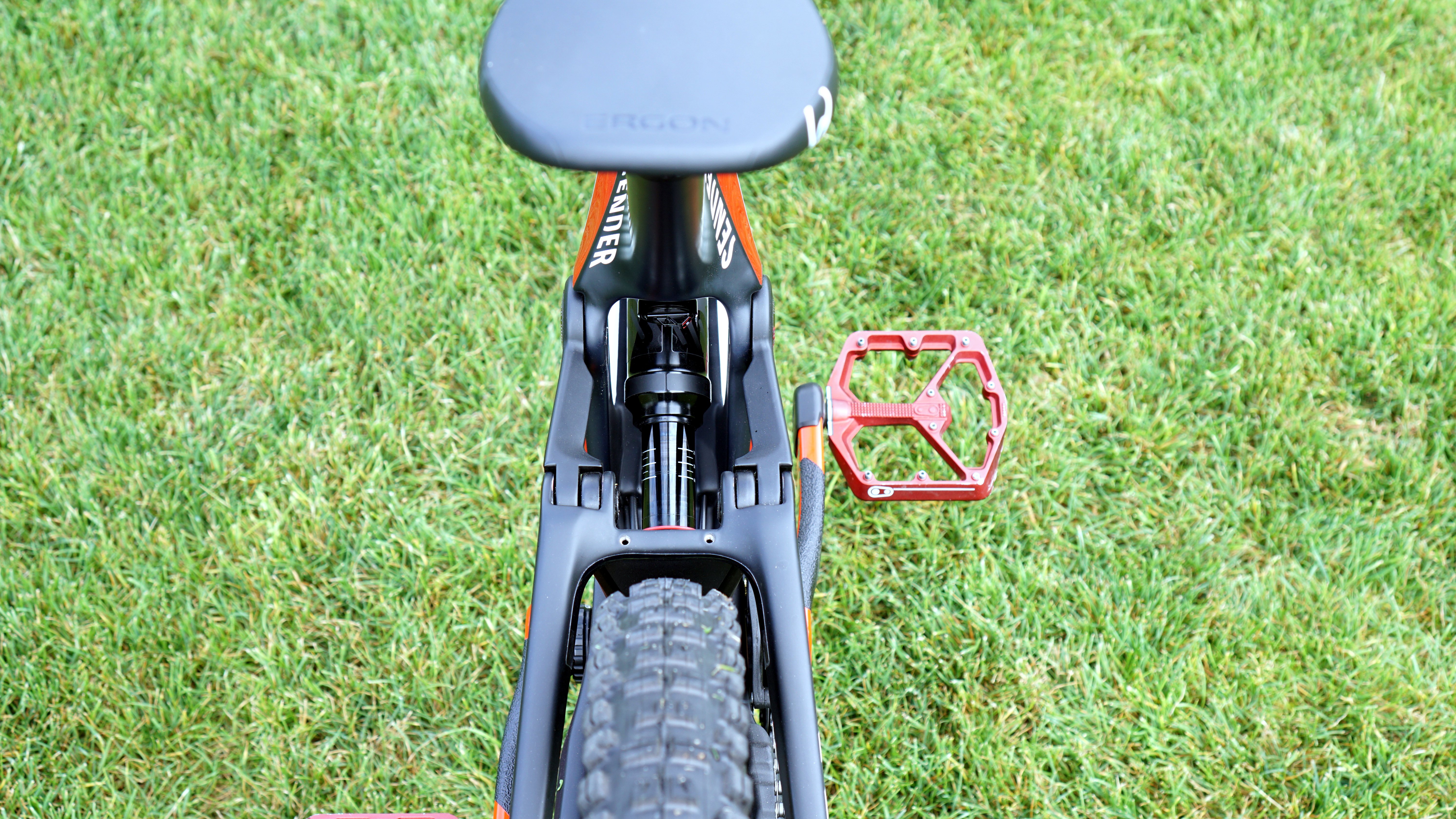 Tidy packaging. The two little holes are for the integrated rear fender.

Both build kits on the Sender CFR look well thought out. Some details on the version I'll be testing are as follows: 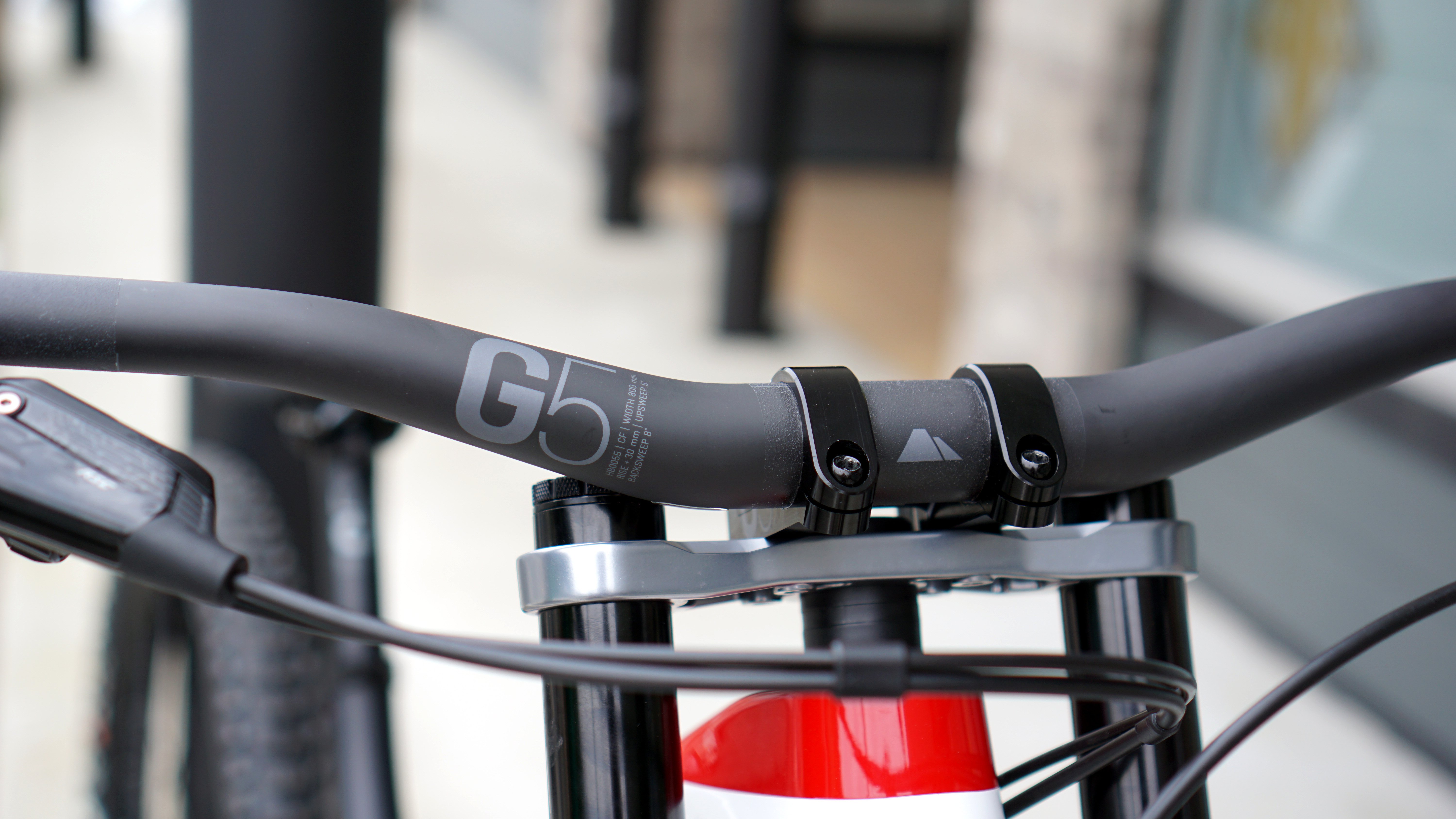 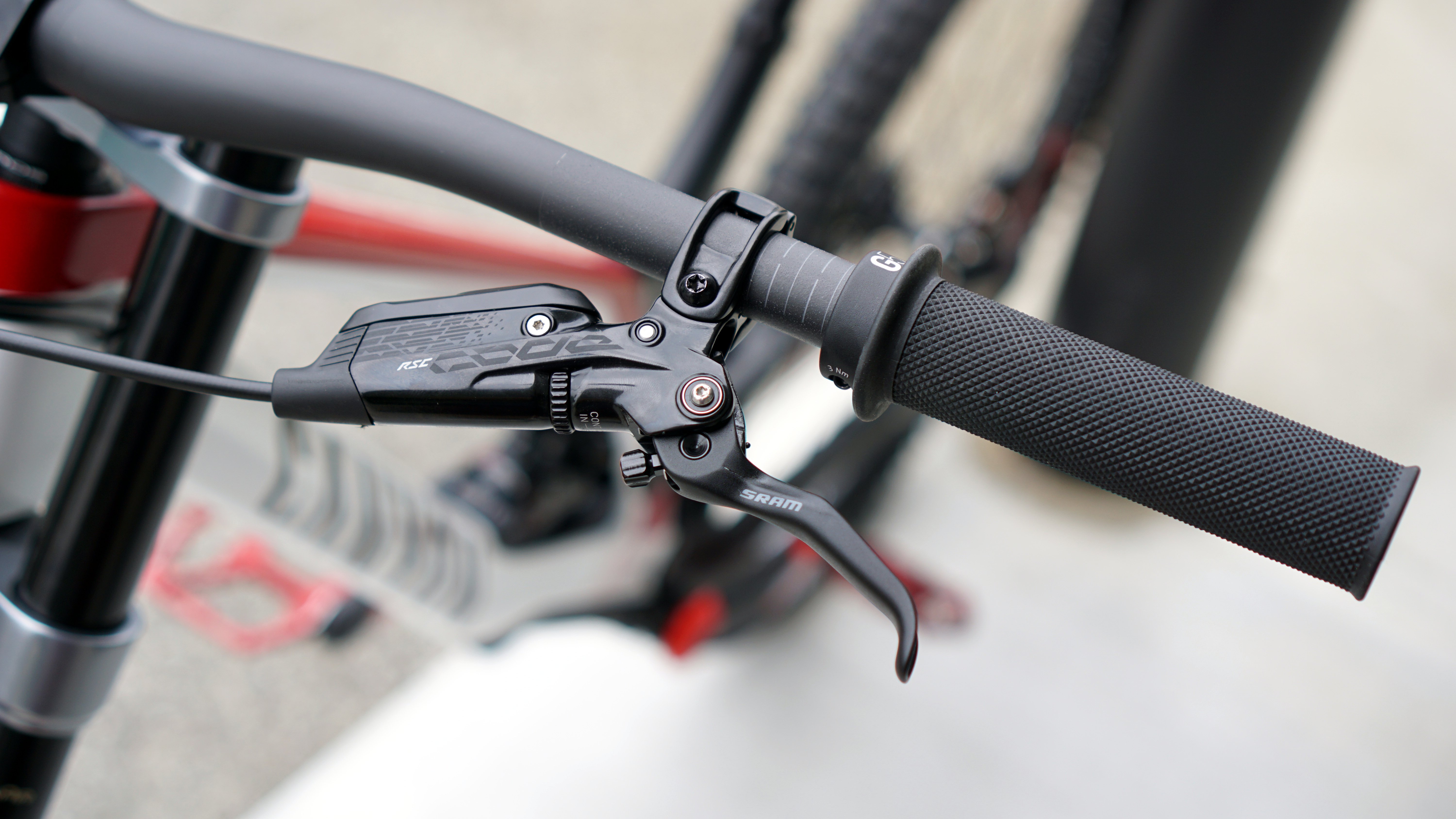 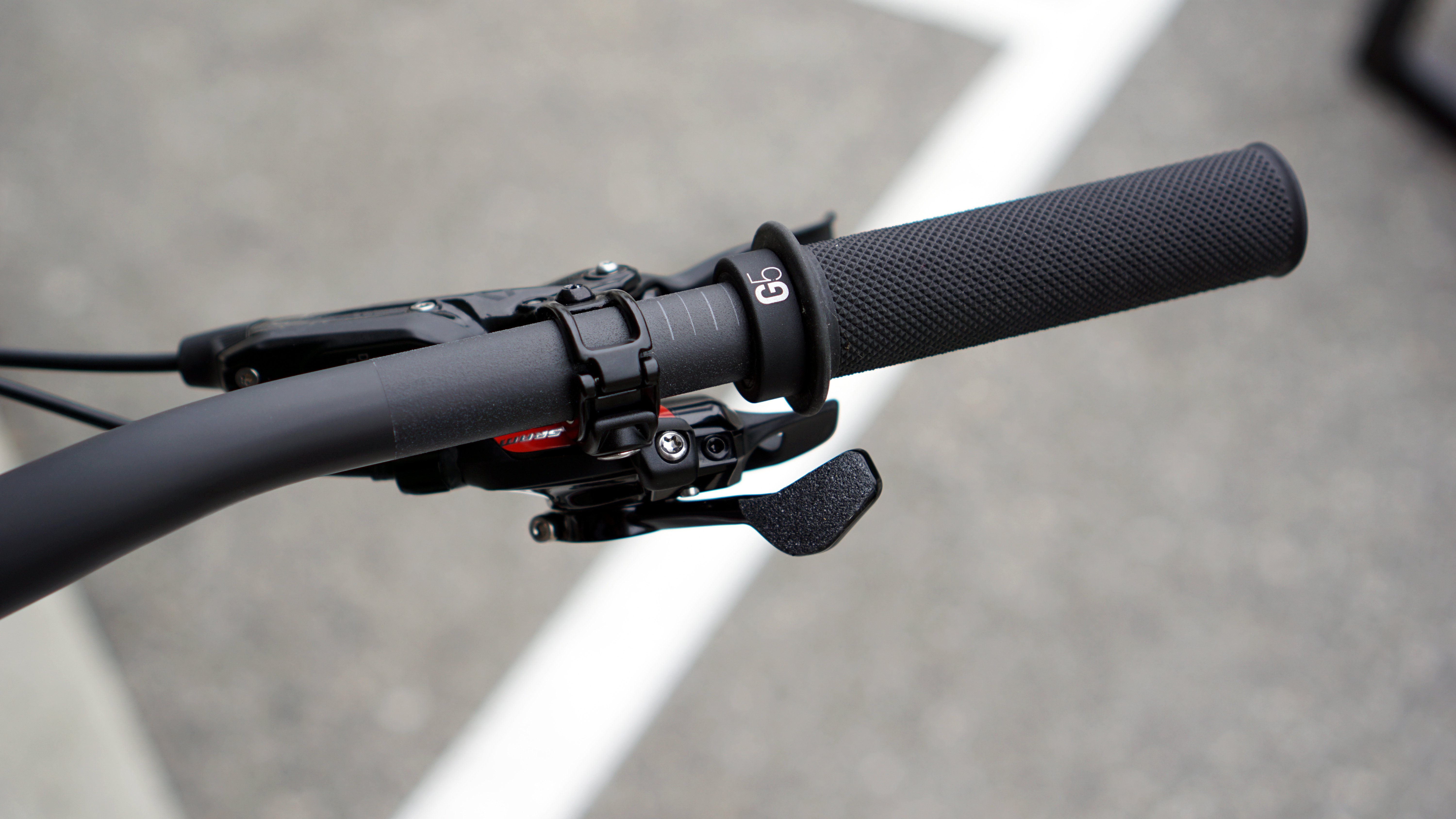 I don't know if the grip tape on the shifter is a custom request from Canyon or new on the XO1 DH group set. Either way, I like it. 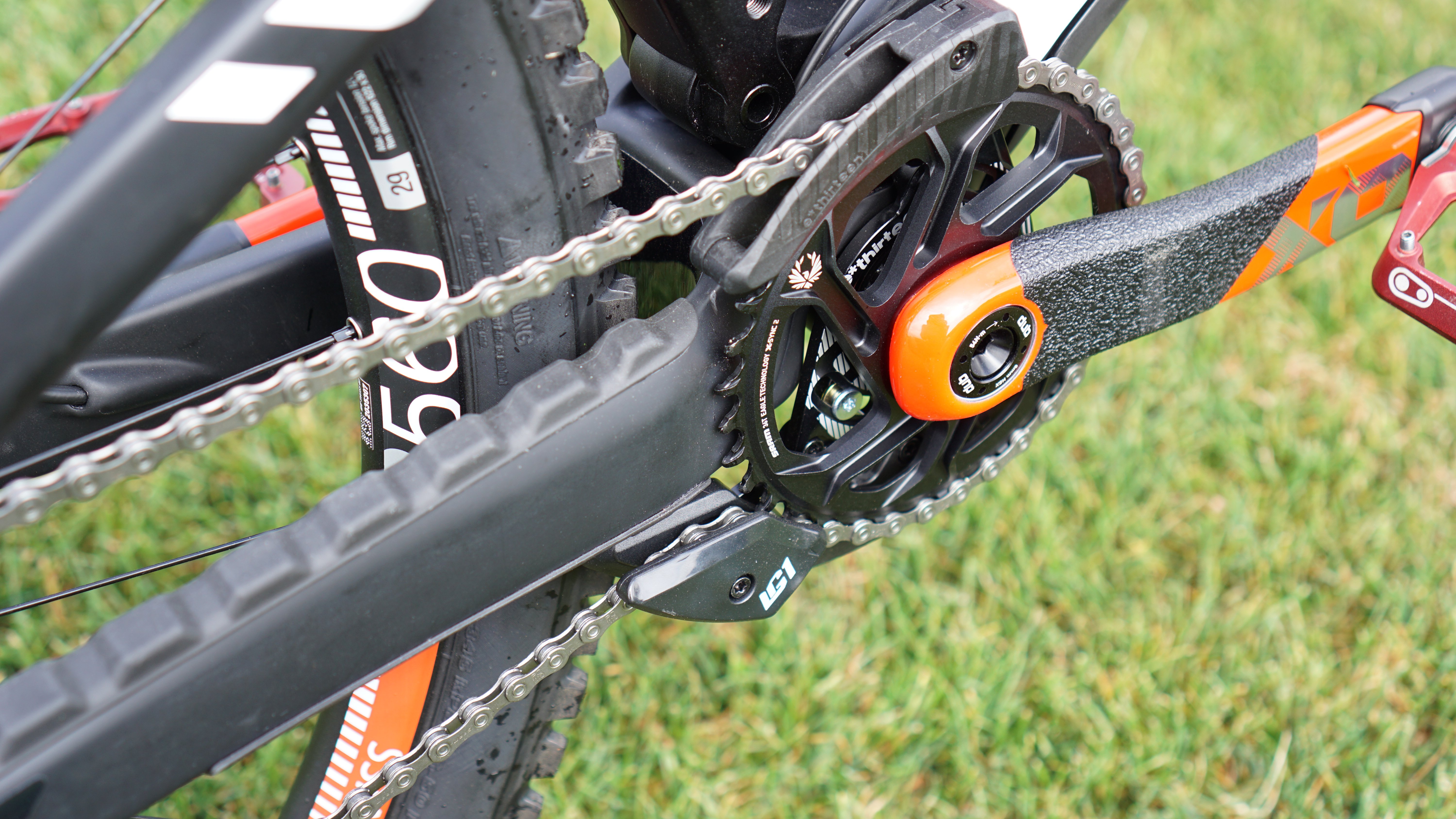 Nice Carbon X01 DH cranks. Although this looks like the chainring is awfully close to the frame. I'll be keeping an eye on this region for wear / debris. 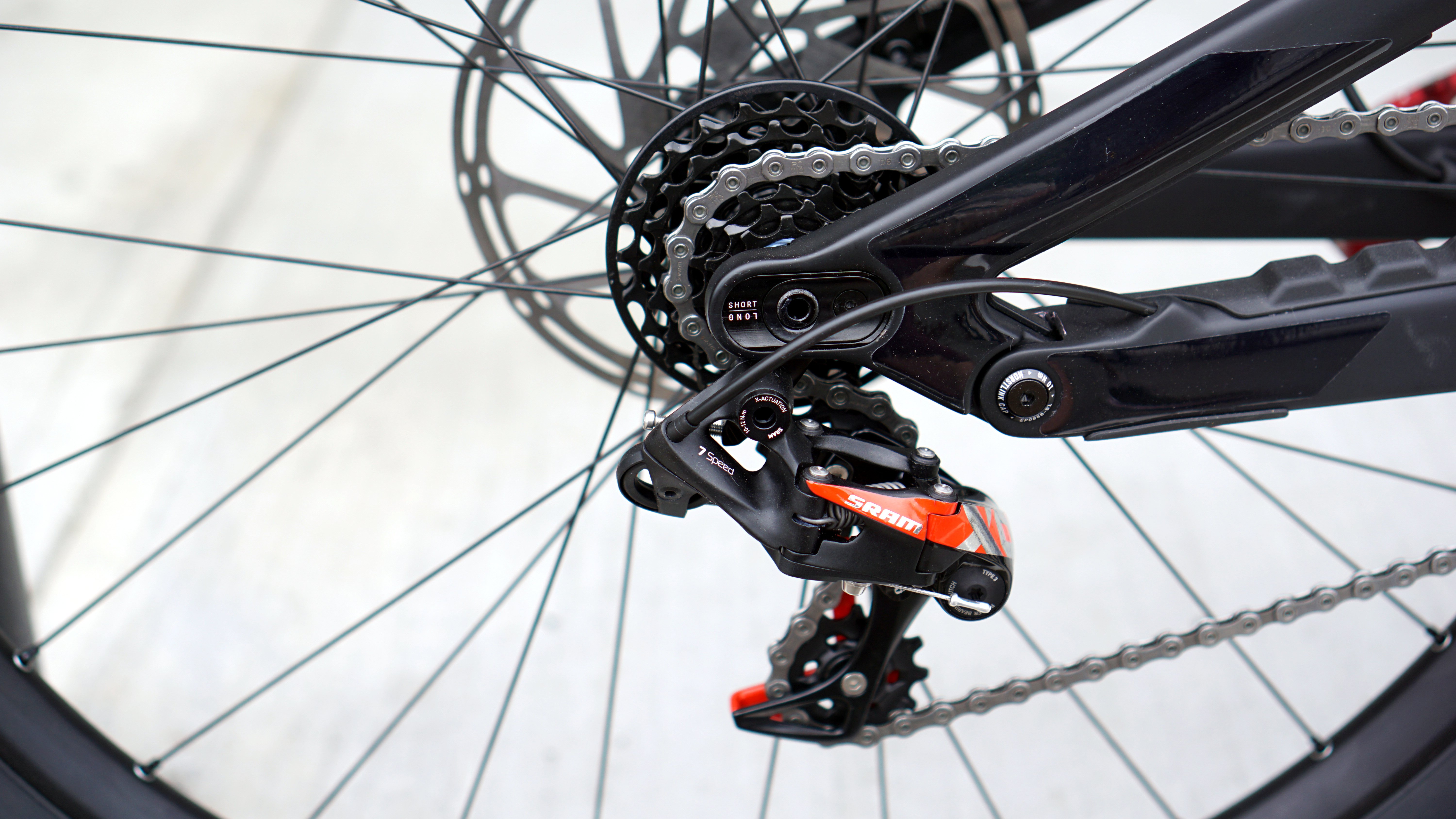 SRAM X01 DH 7-speed drivetrain. Nothing to complain about here. 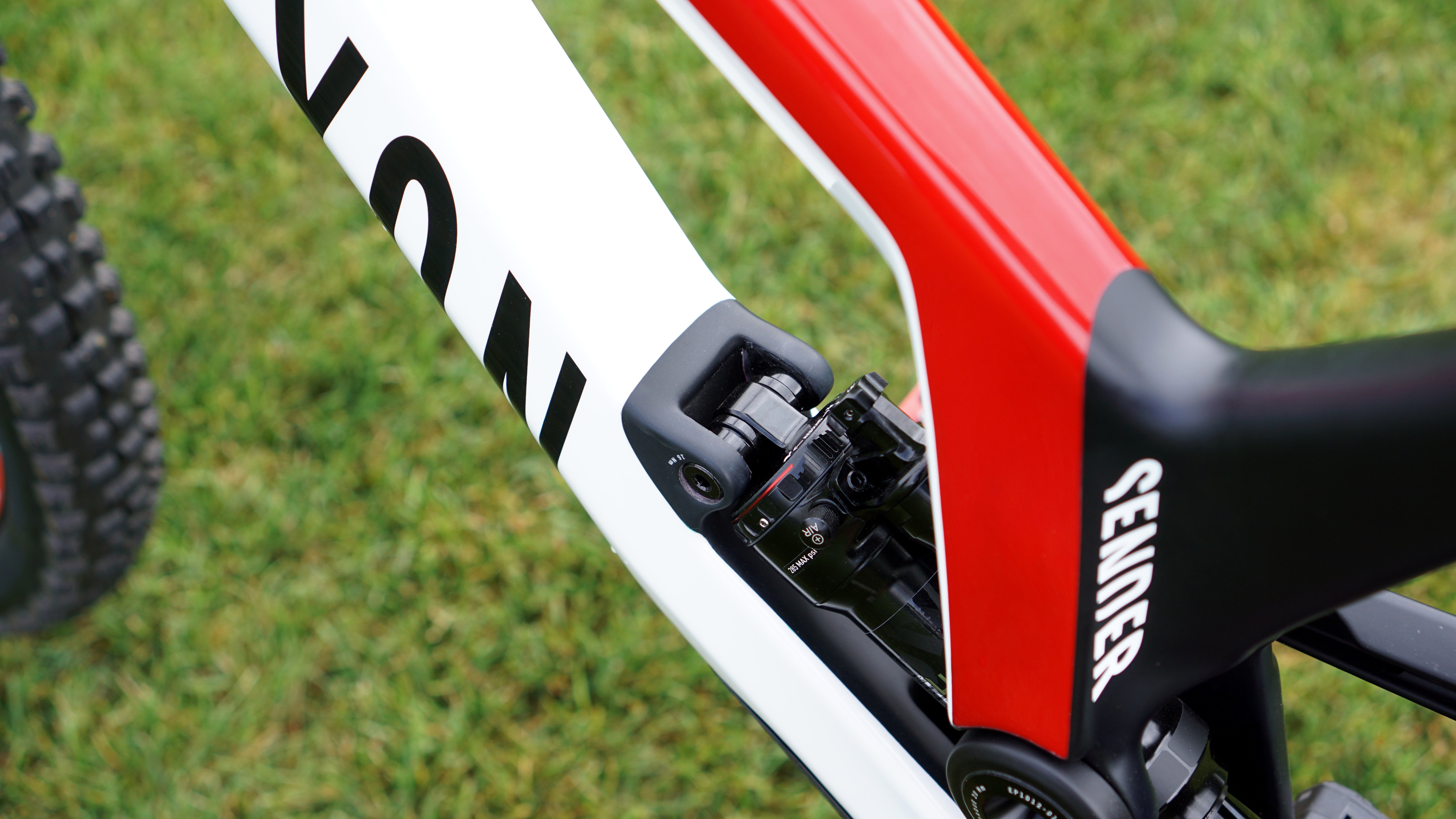 The Canyon Sender CFR is available with air shock or coil shock. I'll be starting on the air shock, but have requested a coil shock to try. 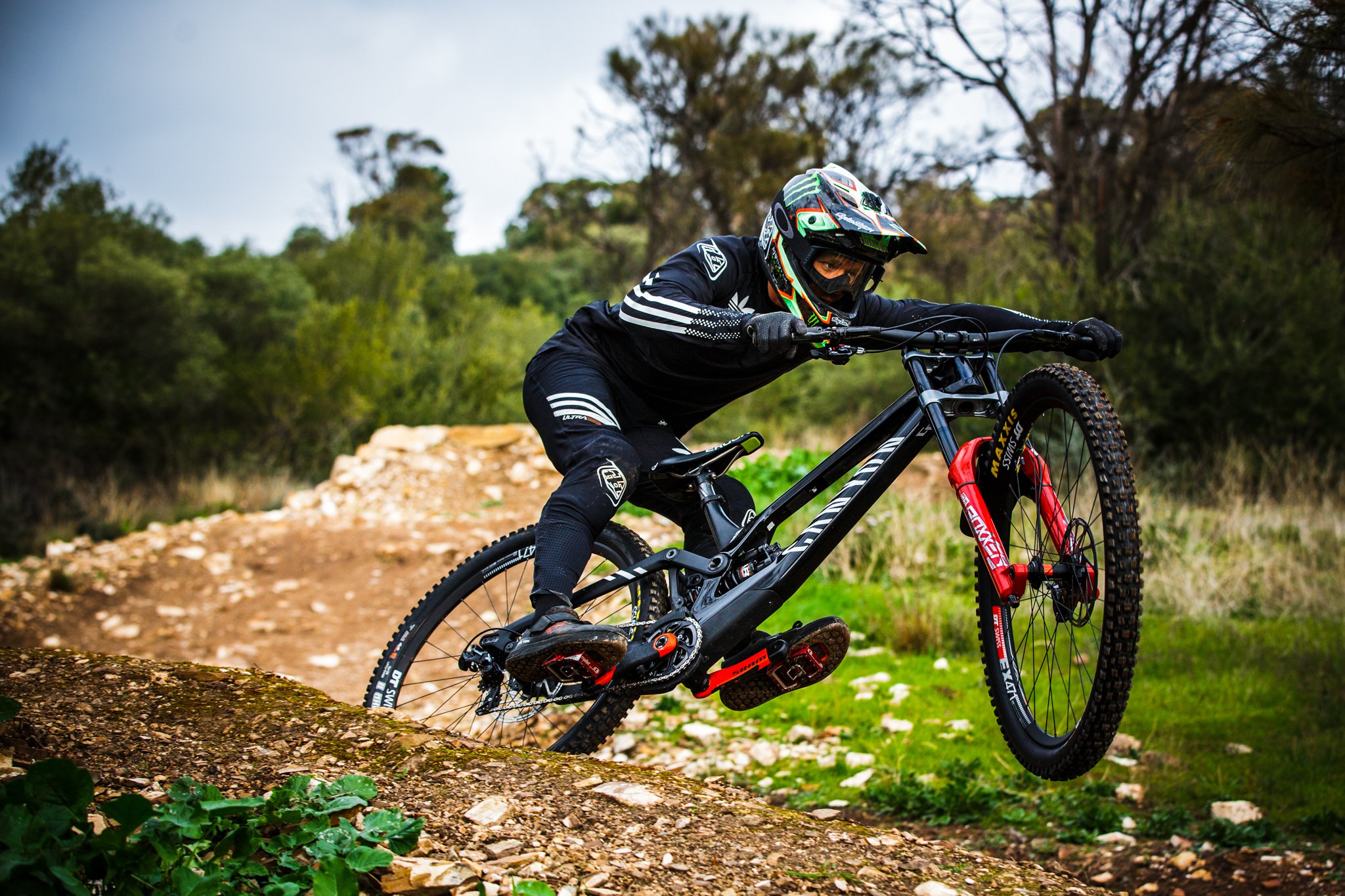 Some shots of Troy shredding on the Sender CFR. 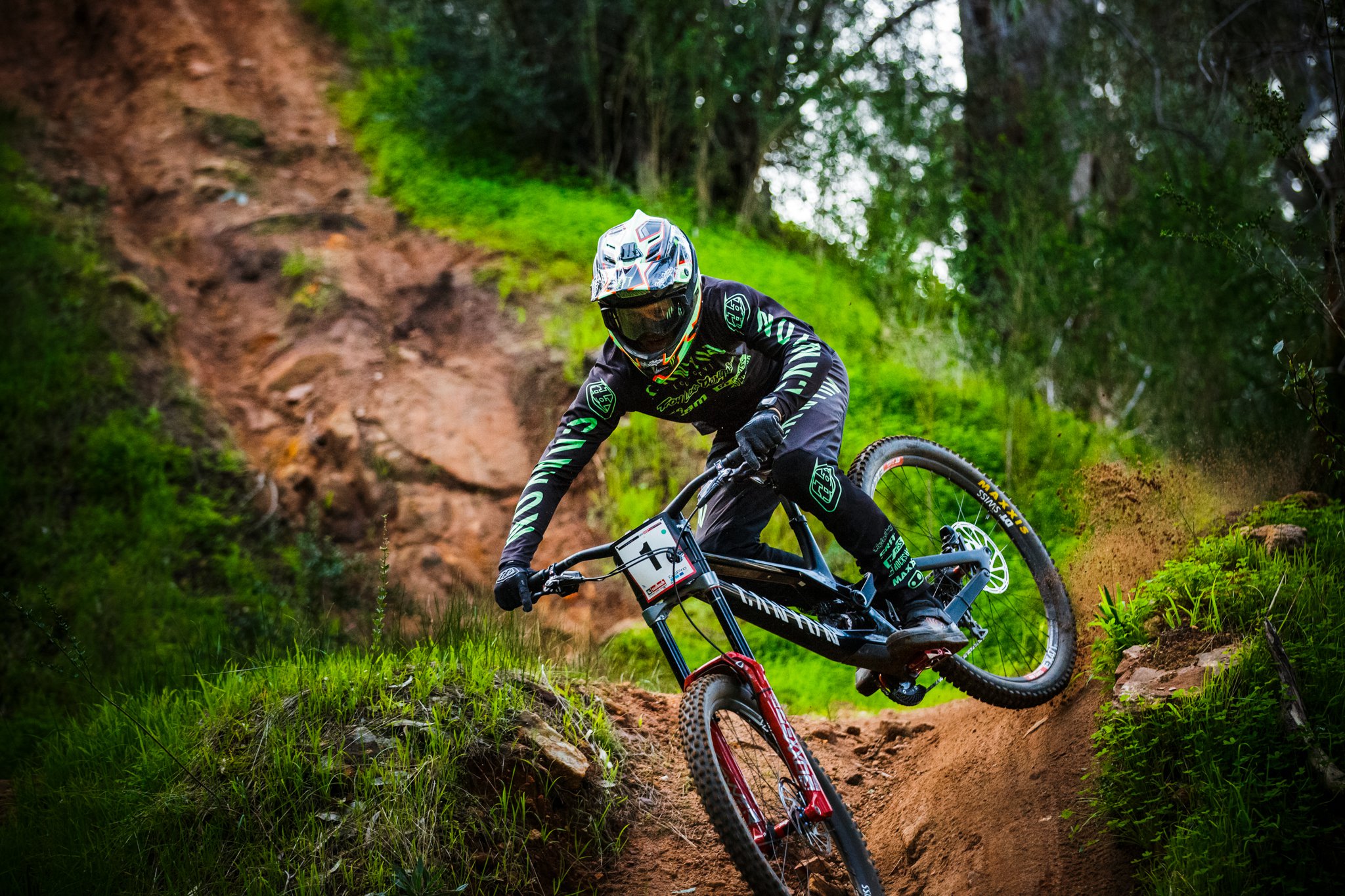 I hope I feel like this when I ride the new Sender CFR. 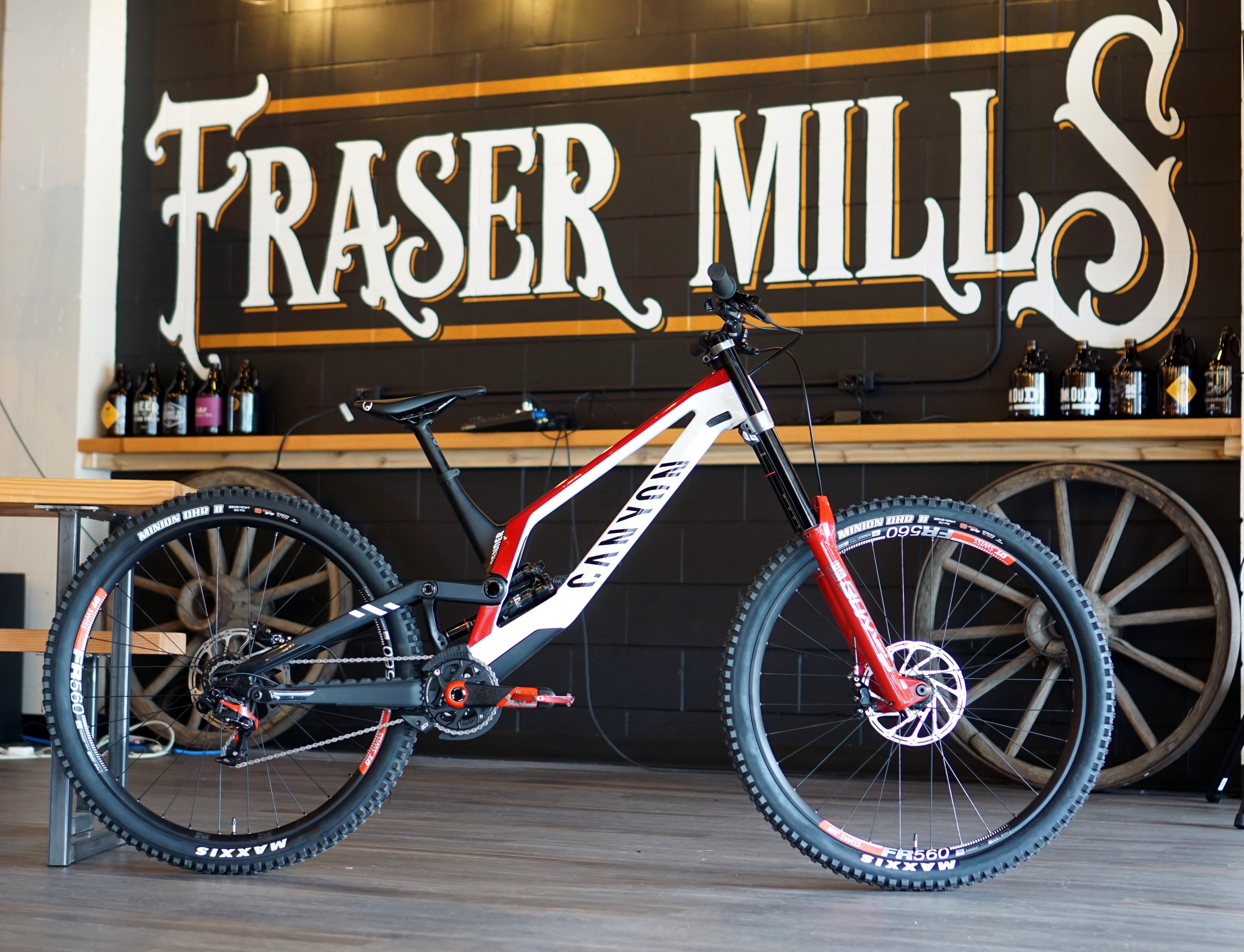 Special thanks to Fraser Mills Fermentation Co (FMFC) for hosting the photo shoot. 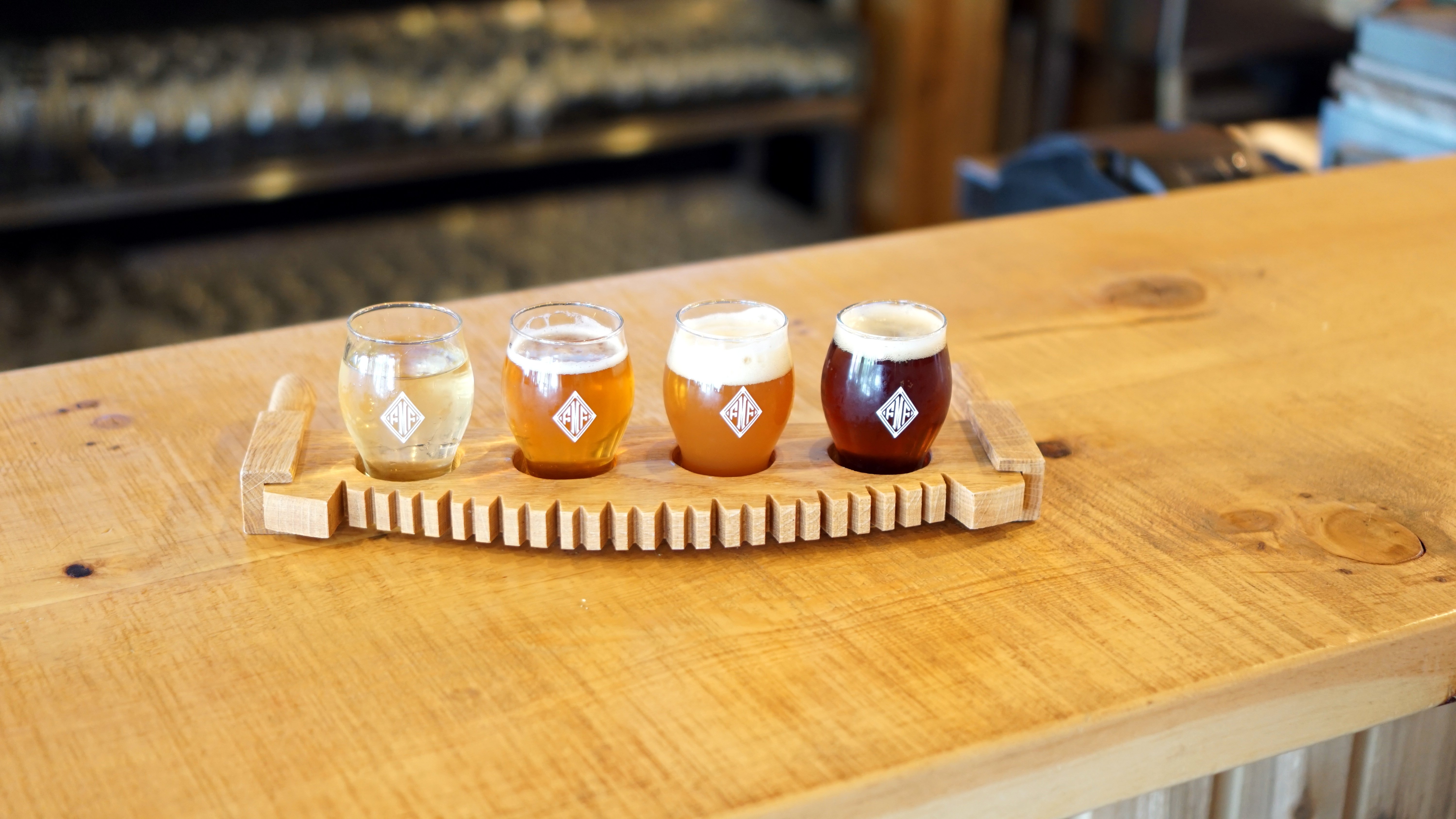 Fraser Mills has the coolest flight paddles that look like old wood saws, but made of wood. The irony! 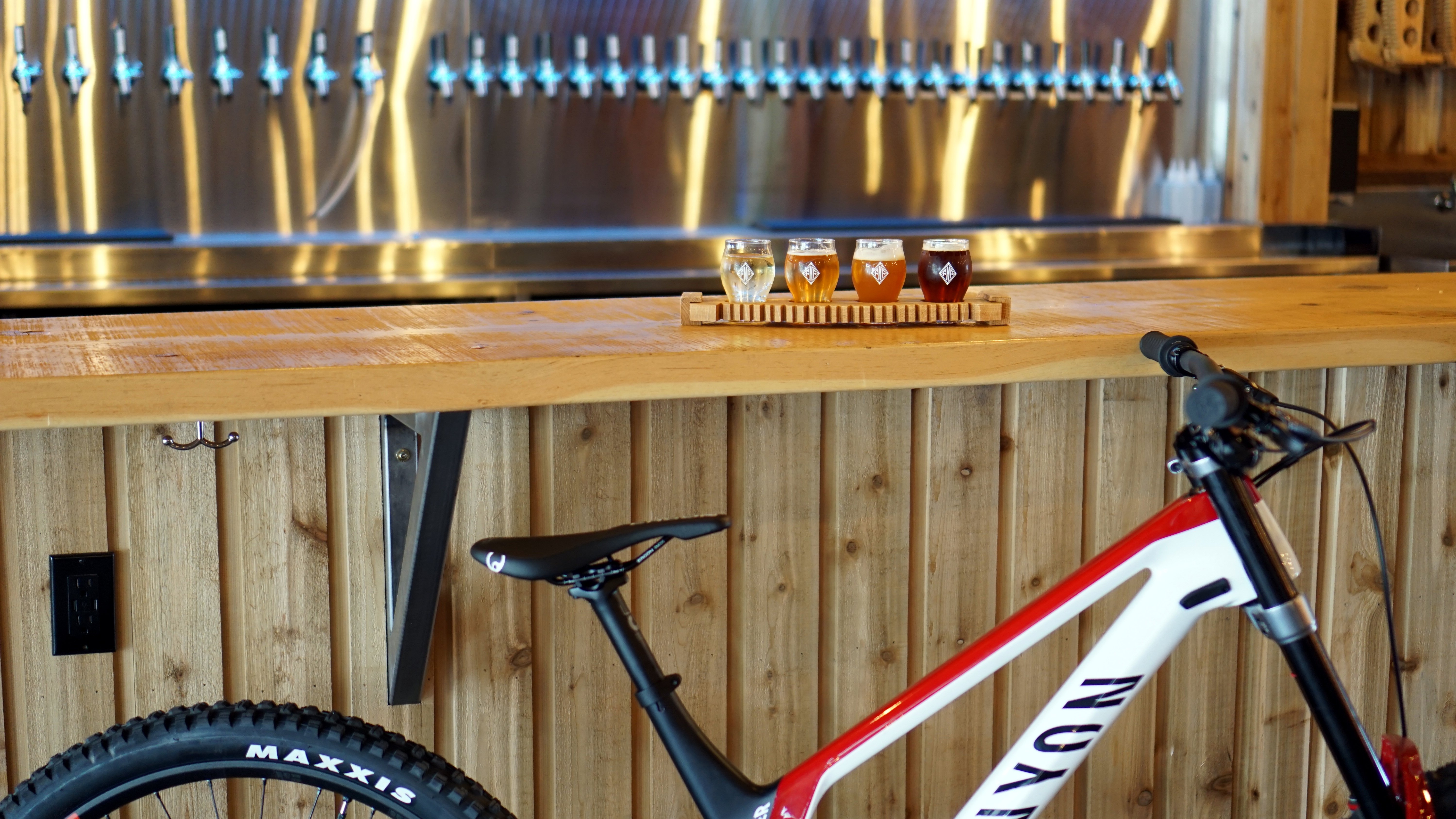 Bikes and Beers; the perfect complement. FMFC is Port Moody's newest (sixth) brewery and is worth checking out if you are a local.

Not only am I struck by the gorgeous paint on the Sender CFR, I'm staggered by the value for money. I can't think of a better equipped carbon downhill bike for less money. And it certainly doesn't look or feel like Canyon cut any corners on the Sender CFR. Did I mention it's beautiful? It's hard to deny the value proposition as one of the primary stories here. But the Sender CFR looks like so much more; big wheels, great build, modern adjustable geometry, all implemented into a race-hardened chassis. As I mentioned earlier, we can't order the Sender CFR here in Canada, but Canyon is working on getting things set up for us overly polite Canadians. In locations where Canyon is available, the Sender CFR looks like a fantastic option for an all-out downhill race bike. I'm keen to get some time in on the Sender CFR in the Whistler Bike Park. Keep checking back for updates, and a final review later in the year.

What size did Tim get?

That is a sharp looking colourway. The black is nice but looks pretty boring in comparison.

I wonder why Canyon built this latest frame around the 56mm offset BOXXER and not the reduced version?

Let's be honest here. Any tall rider who doesn't race is going to immediately see what that 27.5 setting really does.

I would love to see these companies sell the linkages that would allow you to swap wheel sizes. Assuming it wouldn't adversely affect the geometry of course but I bet the wc team mechs can quickly and easily swap wheel size on the same frame.

I believe the linkage is the same between the two bikes. So the pivot locations in the main frame must be different to accommodate the different wheel sizes. From what Canyon has given me the bike is designed with a 27.5" rear wheel for the Small and Medium. 29" rear wheel for the Large and Extra Large. You can't just swop wheels and move the rear shock mount to labeled hole.

I was torn between the Large and the X-Large. I was really comfy on the V10 last year with a 1315 mm wheelbase. The Sender CFR Large is 1305 mm, with +/- 8 mm front center adjustment. So in the longer reach it'll be real close. I have 10 mm more in the chainstay too if I want a bit more length to a 455 mm chainstay. All that said I'm REALLY curious to try the X-Large, which will hopefully happen later this summer.