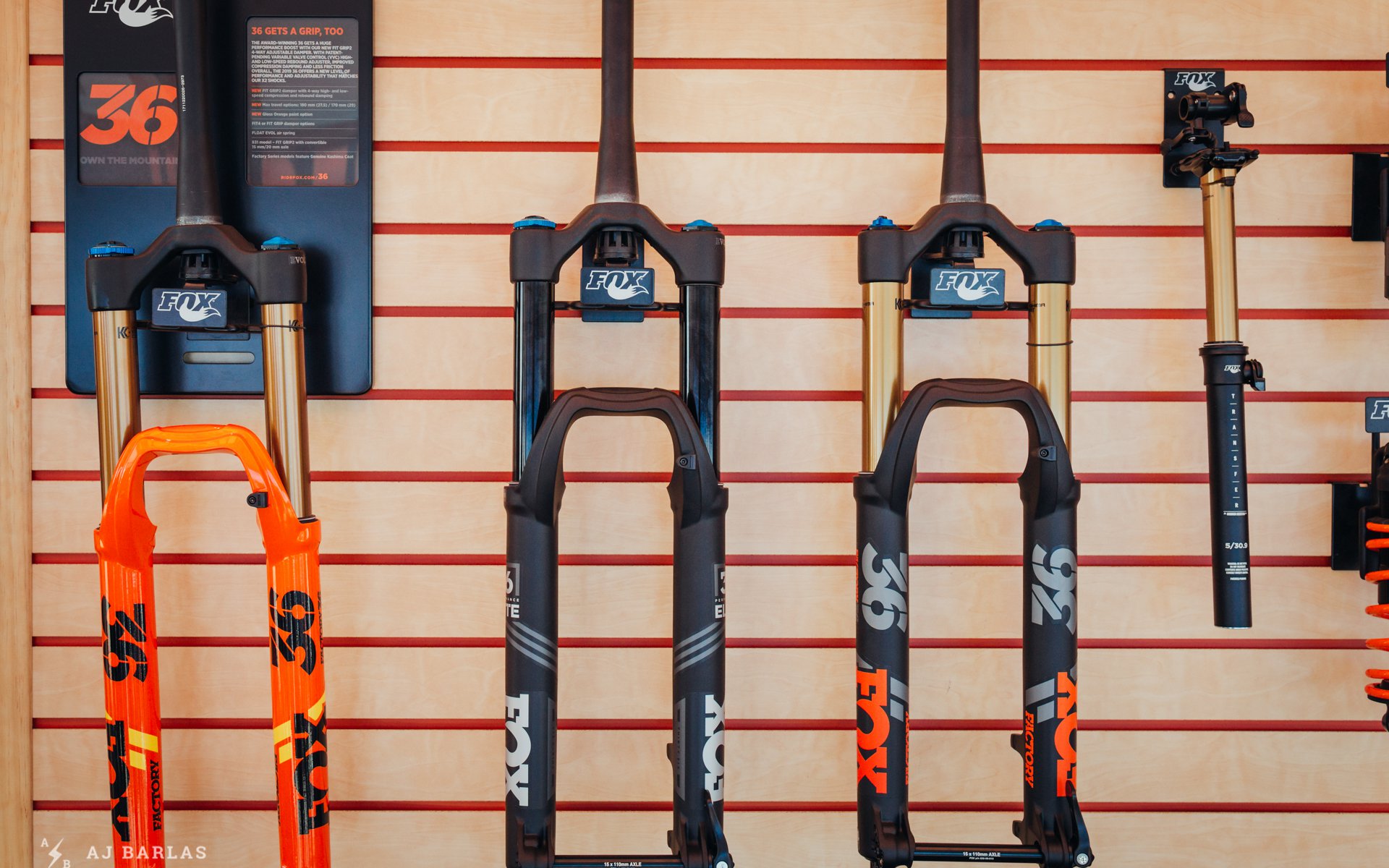 Fox wasn’t shy about showing the Marzocchi connection at Sea Otter, with the classic freeride brand displaying the new Z1 and 58 in the Fox pit. Both brands have a lot to be pumped about, with Marzocchi making a return with some competitively priced forks and Fox rolling out some very significant updates, especially for the 36 and 34 forks.

Fox released the new range of suspenders a couple of weeks prior to Sea Otter but Fox staff were on hand to discuss the updates – which include the new improved FIT GRIP2 damper in the brand’s 36 model fork. The FIT GRIP2 is the evolution of the GRIP damper and it’s the first time Fox has released a trail fork with high and low-speed rebound damping in addition to the high and low-speed compression damping that the RC2 level 36 has featured for some time. 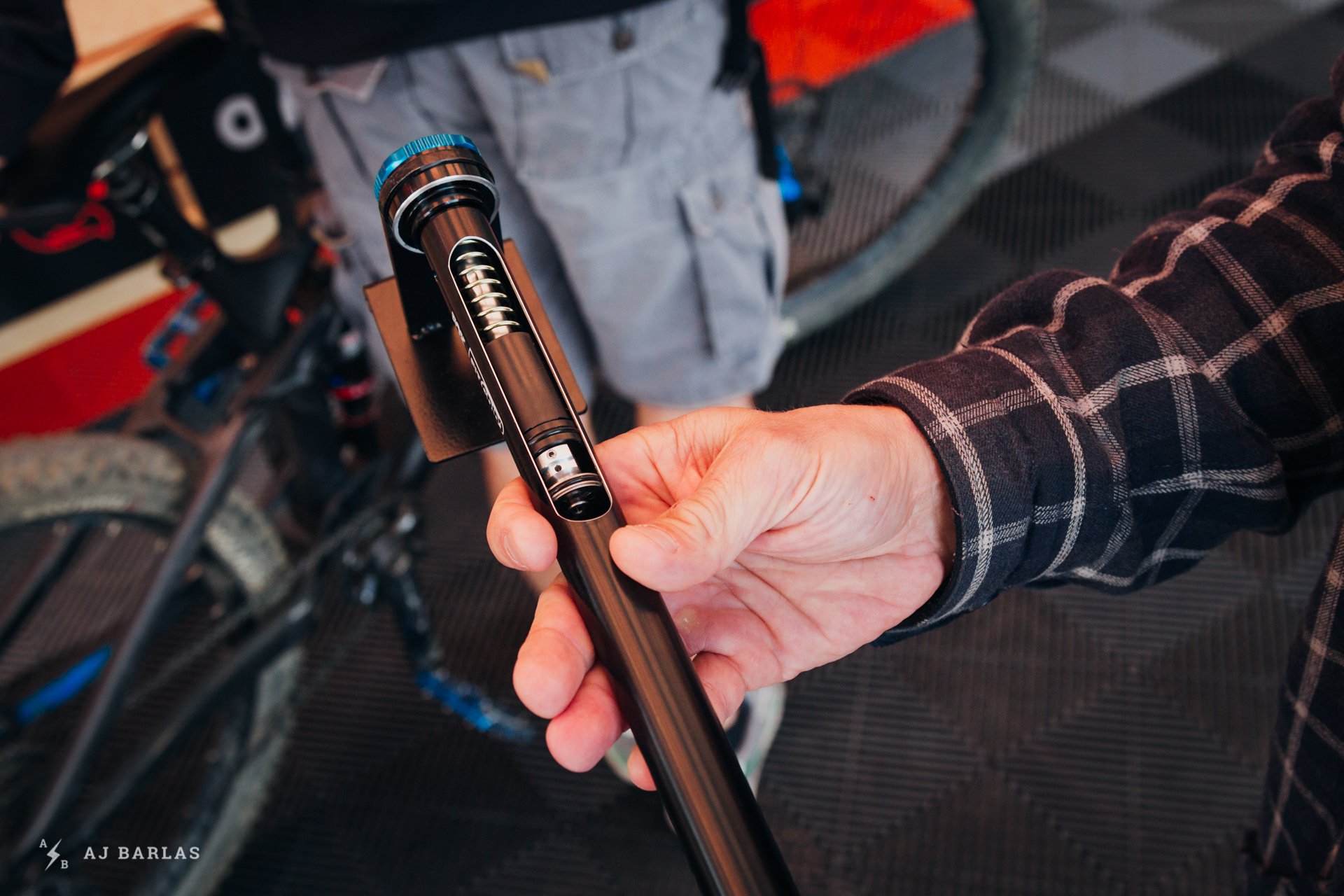 The new GRIP2 damper includes the coil-sprung floating internal piston of the original GRIP technology and the system allows excess oil to flow out of the cartridge and into the rest of the fork. Fox says this allows for more consistent damping while also improving durability with that oil lubricating the seals throughout. Fox says it’s a minor amount but enough to be of benefit without having a negative effect on anything else. It improves the glide of the fork's internals and bumps performance in the process.

Friction is further reduced because the GRIP damper requires fewer parts and seals. On its own, this allows for lighter action and better sensitivity off the top but a more robust negative air spring amplifies this as well. With the fork being lighter through the initial use of the stroke, Fox worked to improve the mid-stroke and developed an improved 'mid-valve.' The mid-valve design allows for more support and Fox claims it does so without adding harshness to the travel. The compression adjustment now offers a wider damping range than previously, allowing for the increased support without adding unwanted harshness. 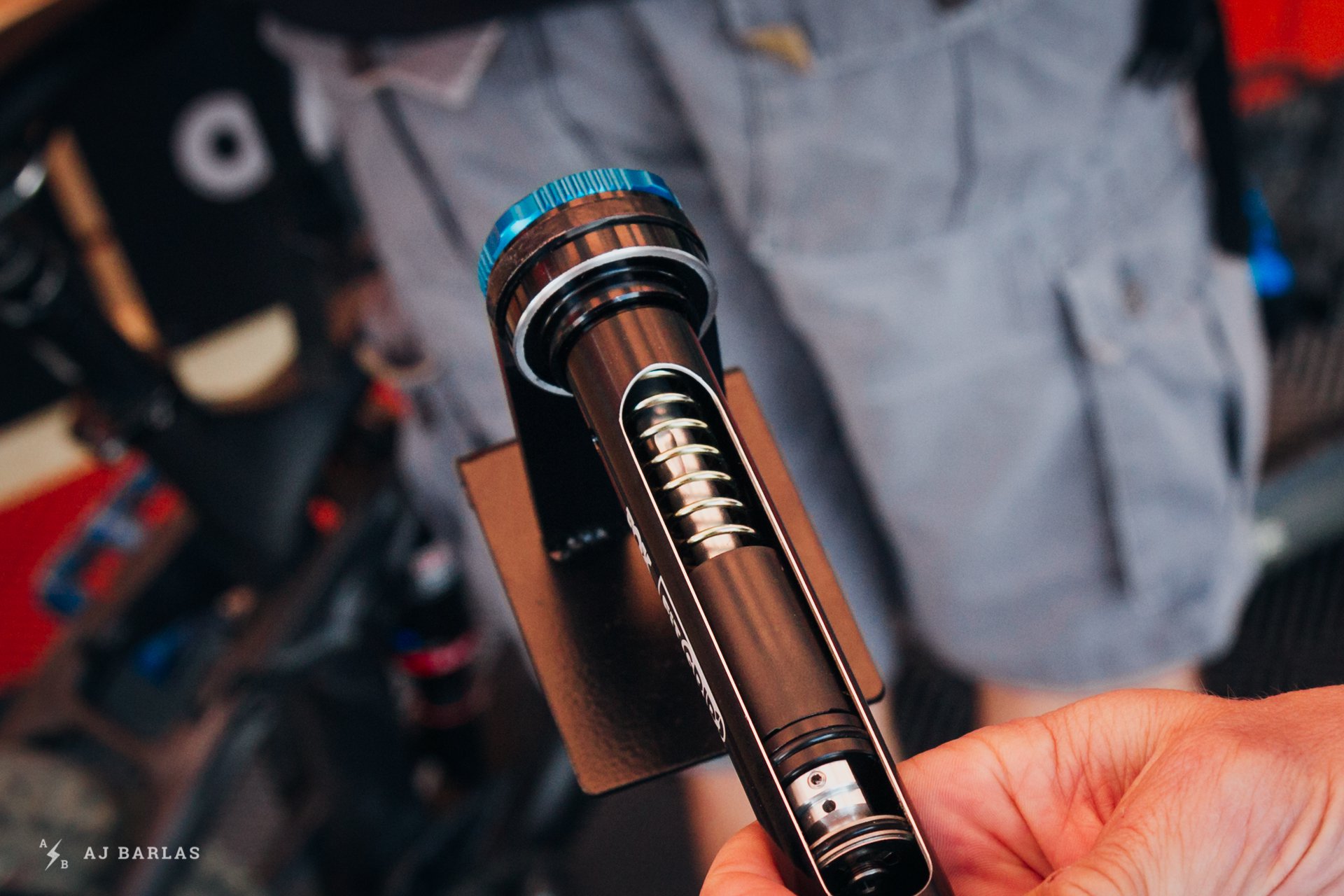 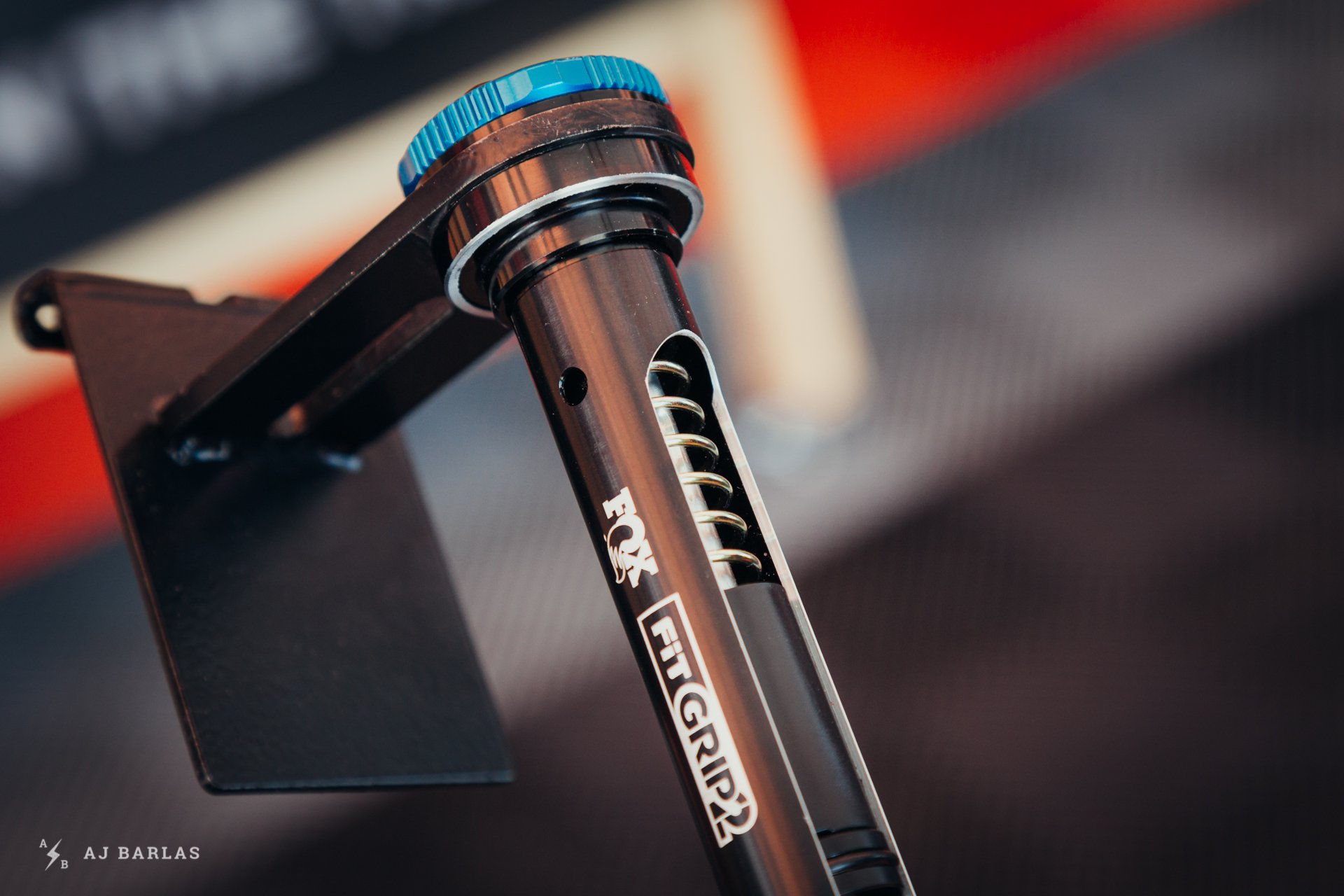 The hole in the cartridge that excess oil flows out of and into the rest of the fork. Fox claims it allows for more consistent damping and better durability.

There's another large development in the rebound circuit; Variable Valve Control – or VVC. This patent-pending technology allows for high and low-speed rebound adjustability, with the high-speed circuit adjusted not by adding preload to the valve but rather, Fox says VVC allows users to alter the flex of the high-speed valve’s leaf spring. It’s a change that alters the stiffness of the valve, similar to tearing the fork down and adjusting the high-speed shims manually, but without a need to disassemble it. 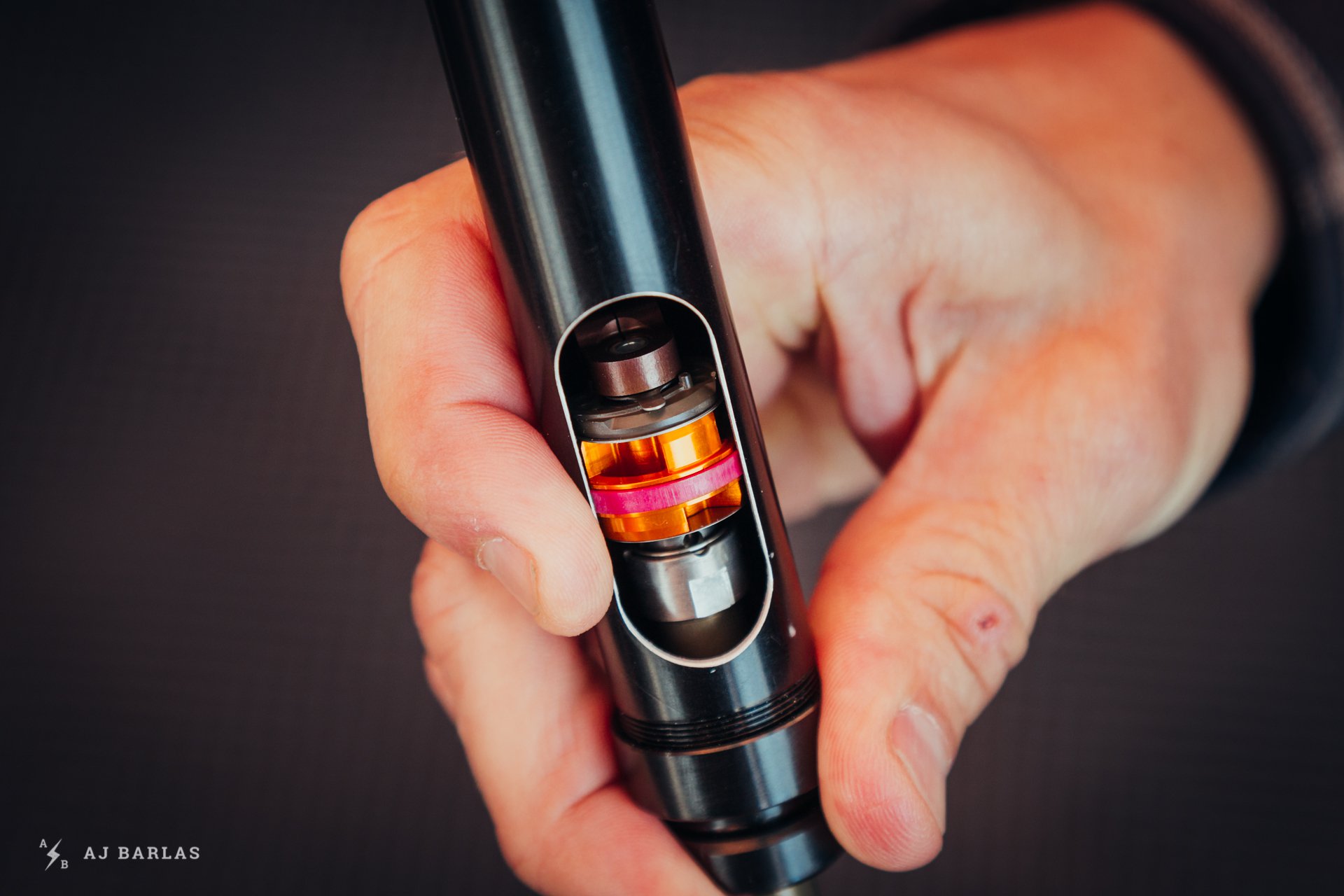 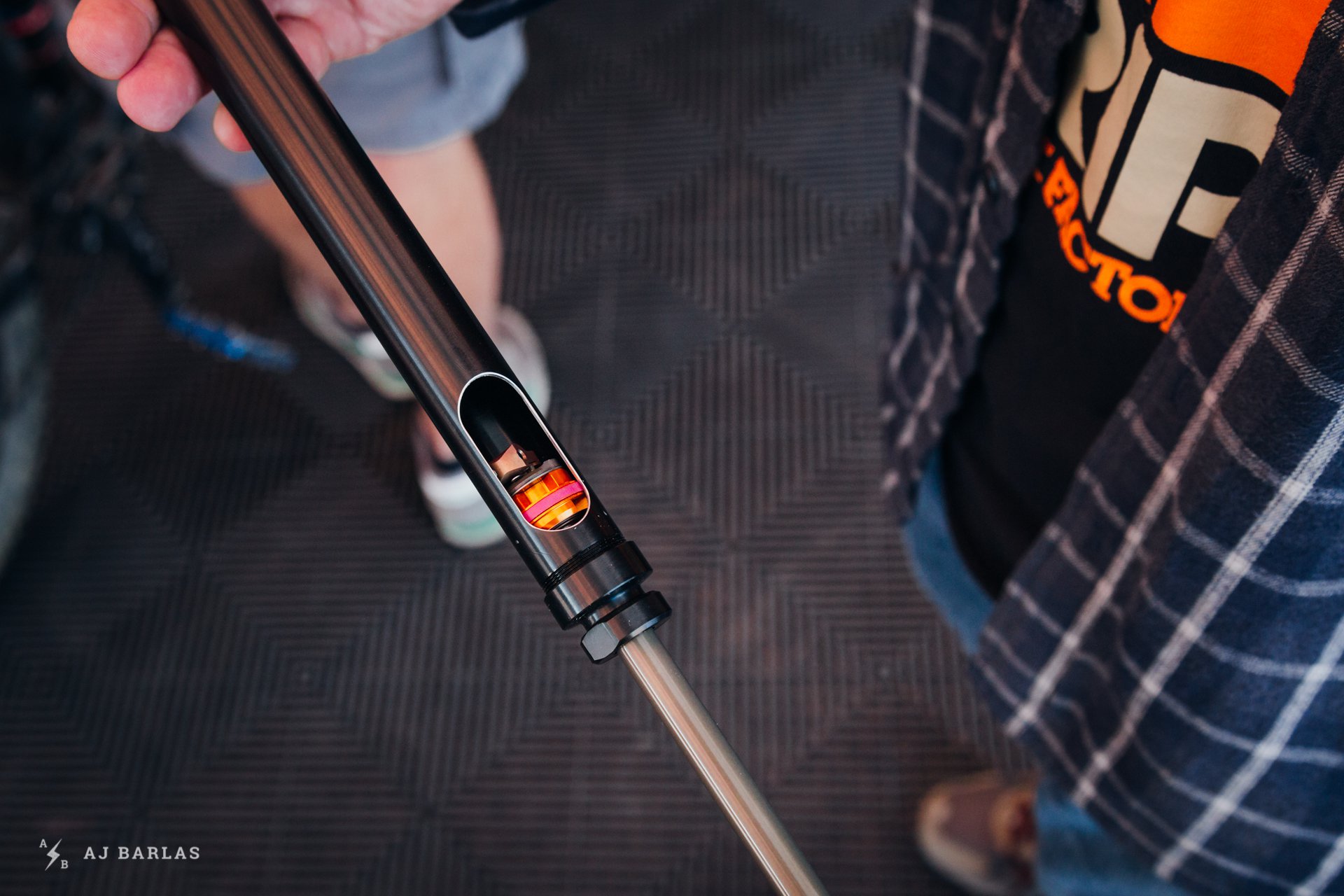 The rebound damper and its location within the fork… 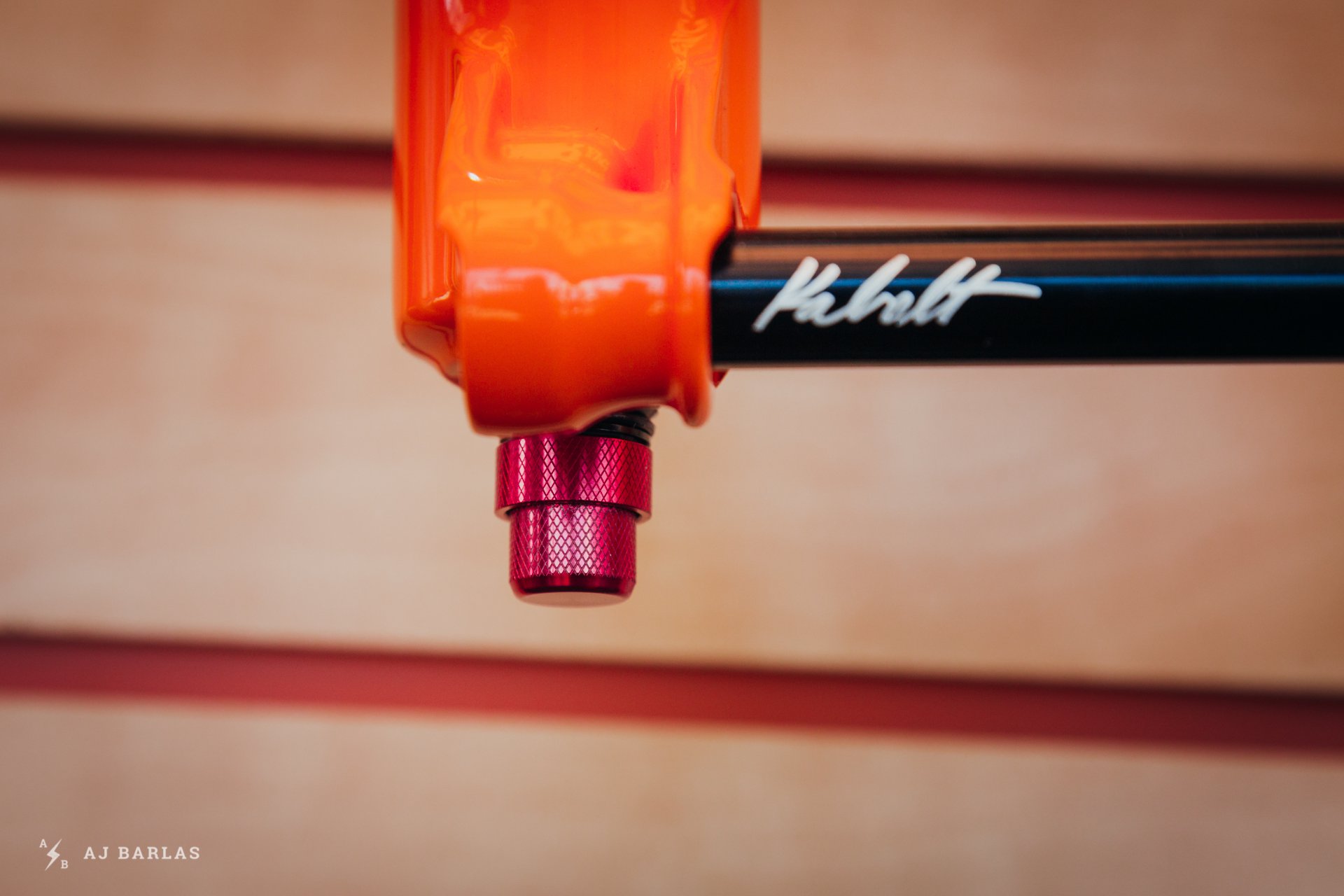 It's adjusted by the updated external rebound adjuster that includes high and low-speed.

With the exception of the updated external rebound adjuster to include the high and low-speed adjustments, the 36 looks identical from the outside. The new FIT GRIP2 damper is available on the Factory and Performance Elite models and there will continue to be a FIT4 model of each available as well. 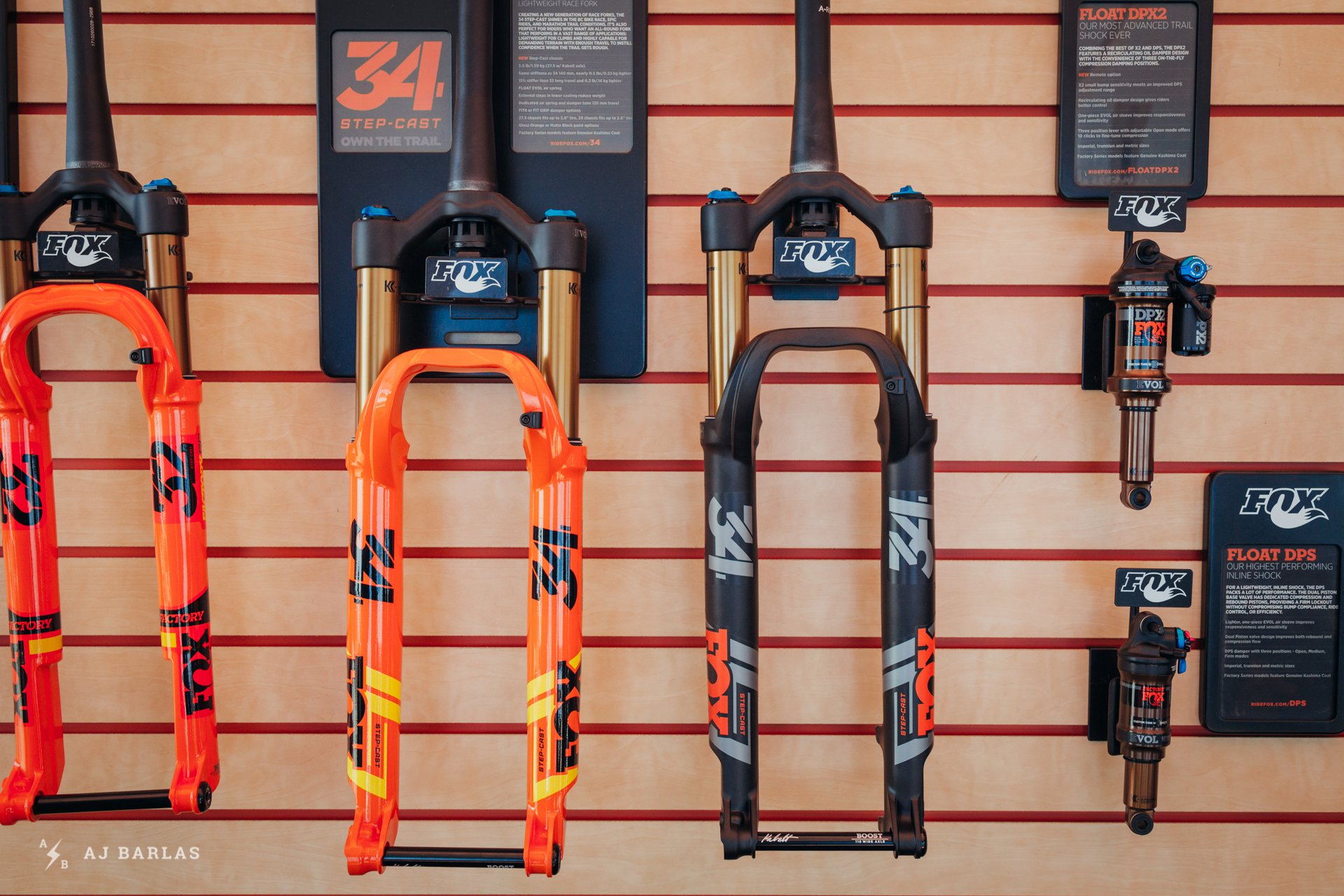 Unlike the 36, the 34 has some external changes to go with tweaked guts. Fox found there is a market for a slightly more aggressive fork than the current 34 for riders on a lightweight trail bike (think B.C. Bike Race). The result is a dedicated 120mm travel 34 Step-Cast.

Step-Cast refers to a narrowing of the fork's lower leg as it approaches the axle. This is accomplished with a shorter upper tube length which allows the floor of the magnesium lower leg to be raised, making space for this narrowing. On the 32 Step-Cast, material is removed from the inner profile of the leg while on the 34 the outer wall gets the nip and tuck. The 27.5 variation of the new fork weighs a claimed 3.5lb/1.59kg and despite being nearly 0.5lb/0.23kg lighter than a 140mm 34, it’s said to offer the same stiffness. The fork features the FIT4 damper or the original GRIP damper for less money. It’s a unique fork that could suit anyone that rides hard or in rough terrain on a shorter travel platform. 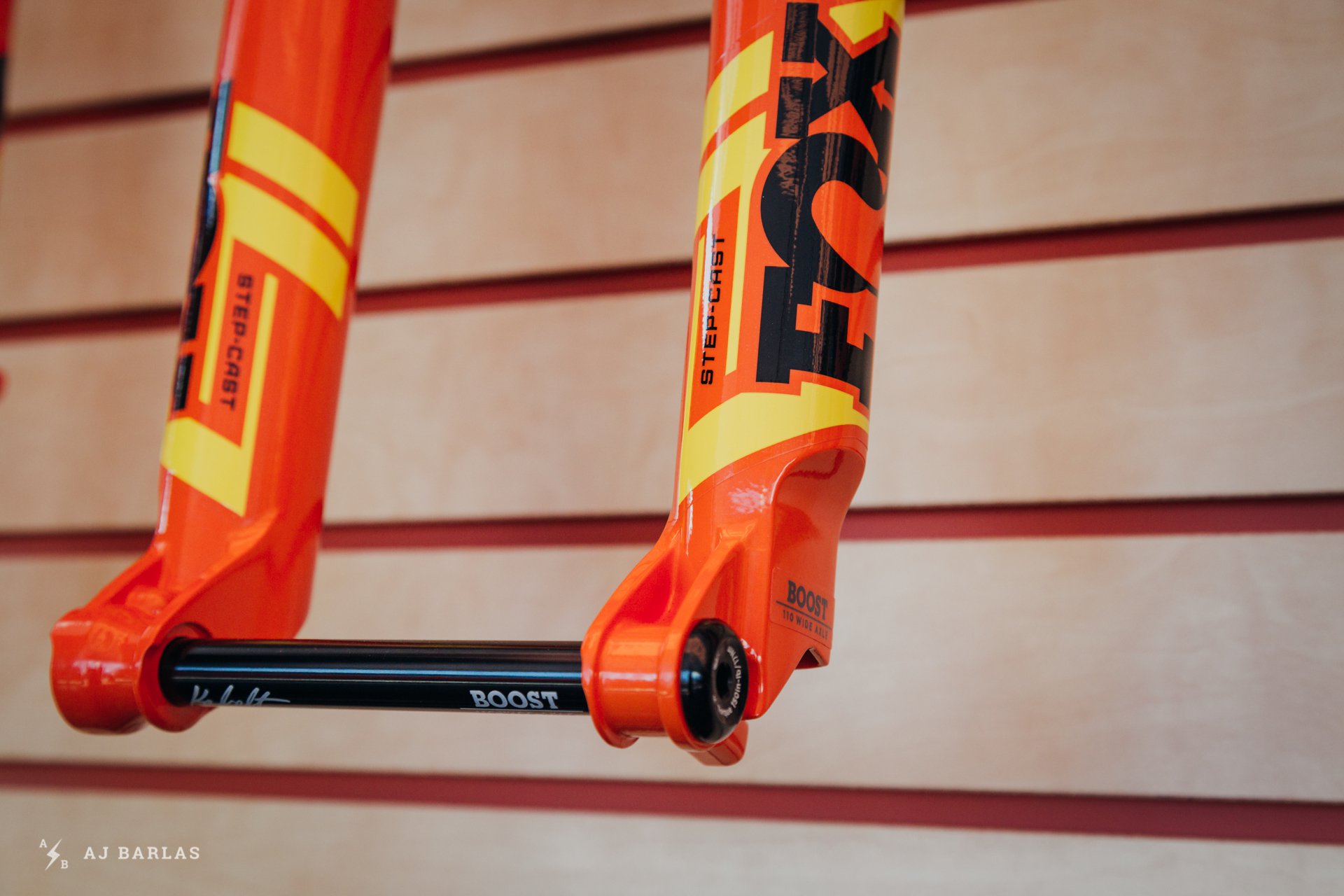 The 34 Step-Cast sees material removed from the outside of the lower fork leg. 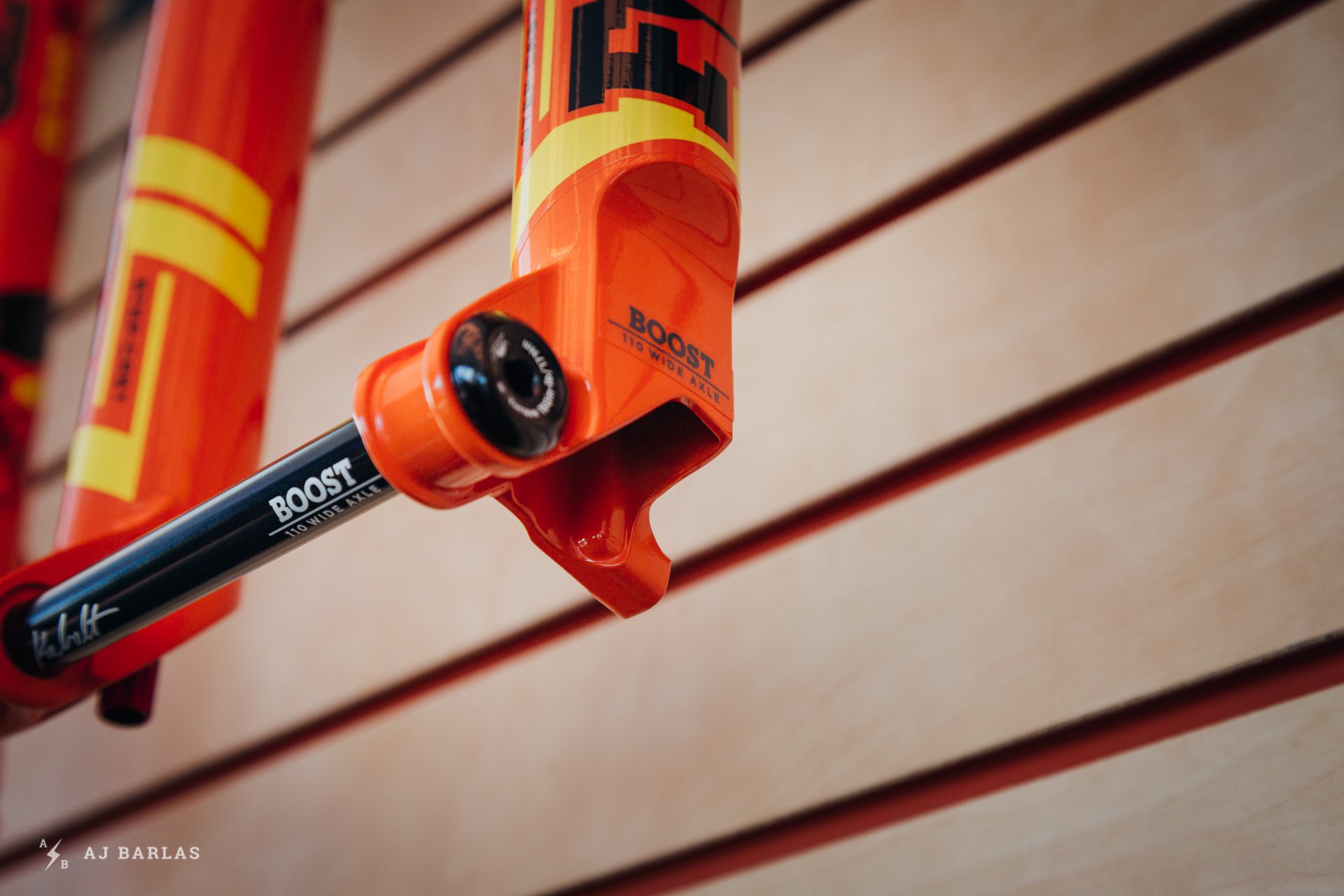 The very bottom of the lower is also hollowed out to reduce weight.

Tweaks have also been made to the Fox Float X2 rear shock. Gone is the little grub screw that was part of the brand’s solution to  air sleeve retention at high pressures. The new sleeve, labeled the XV EVOL, features a clip at the base which Fox says has allowed the max. pressure rating to increase from 250 to 300psi. There’s also a new bottom out bumper integrated into the shock which is said to improve the feel through the bottom end of the stroke, even in the absence of an extreme bottom out event, and the schrader valve has been angled a little for more convenient access on a range of bikes. It’s available in either imperial or trunnion mount metric sizes. 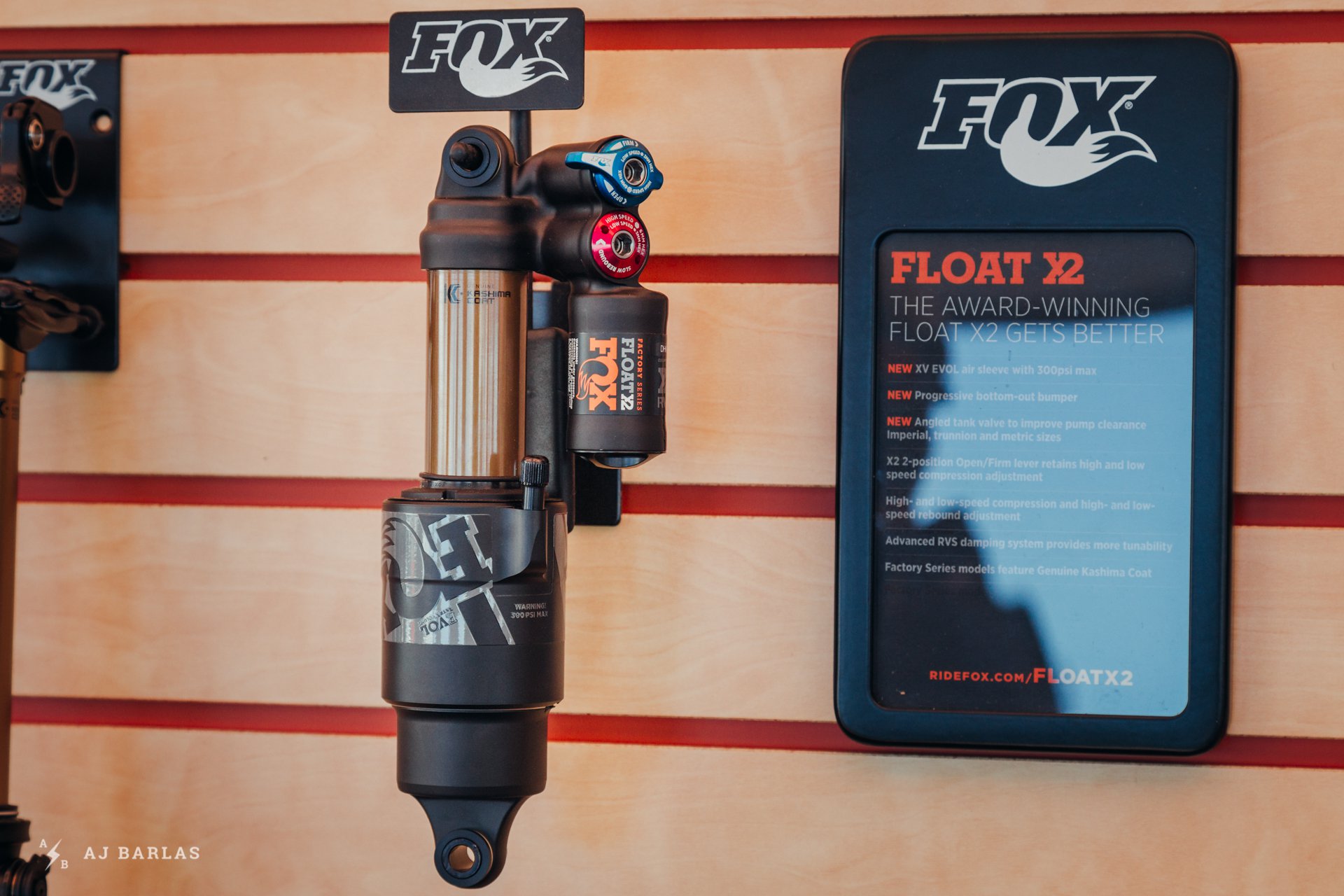 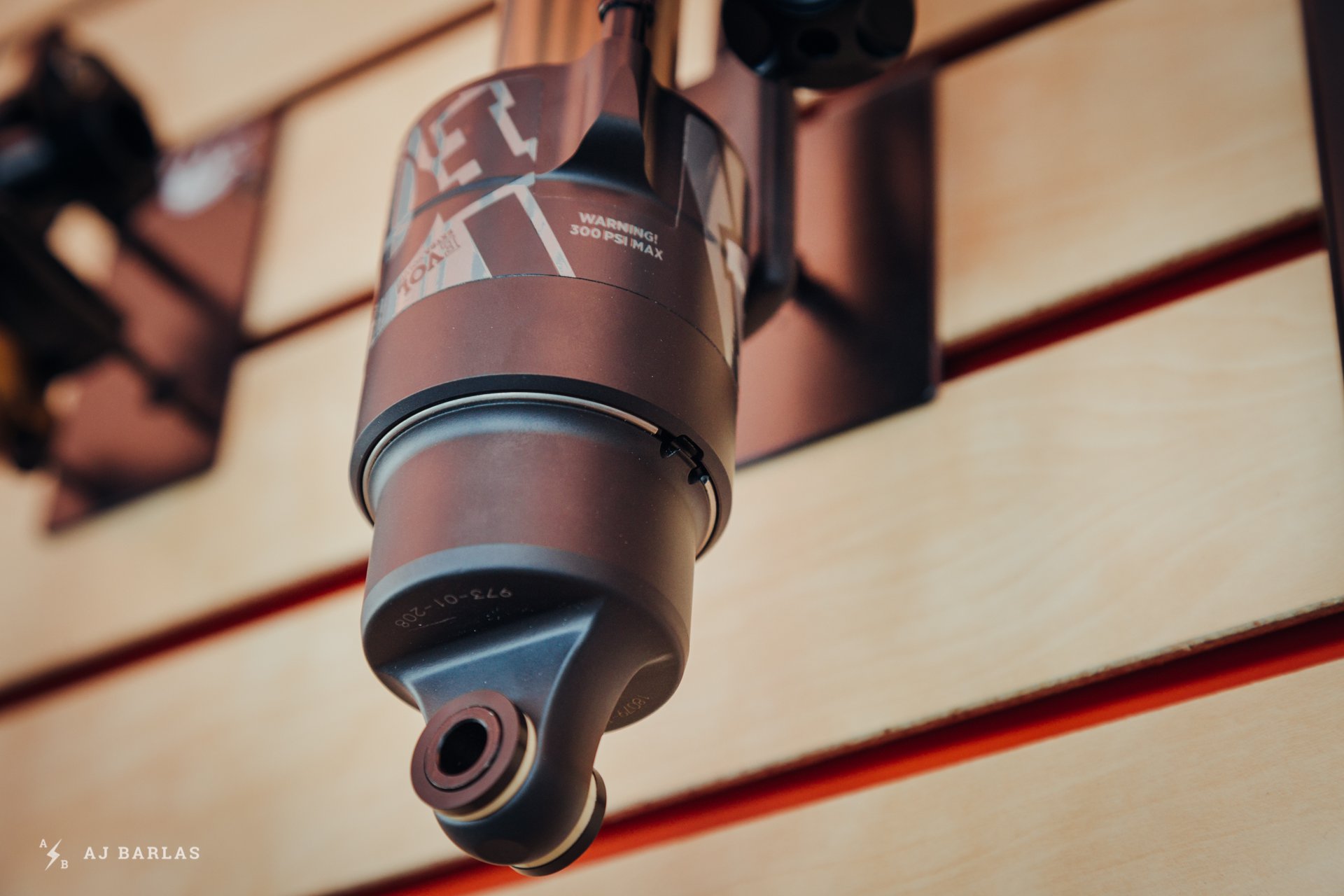 The Float X2's updated air can retainer now allows for a max. air pressure of 300psi... 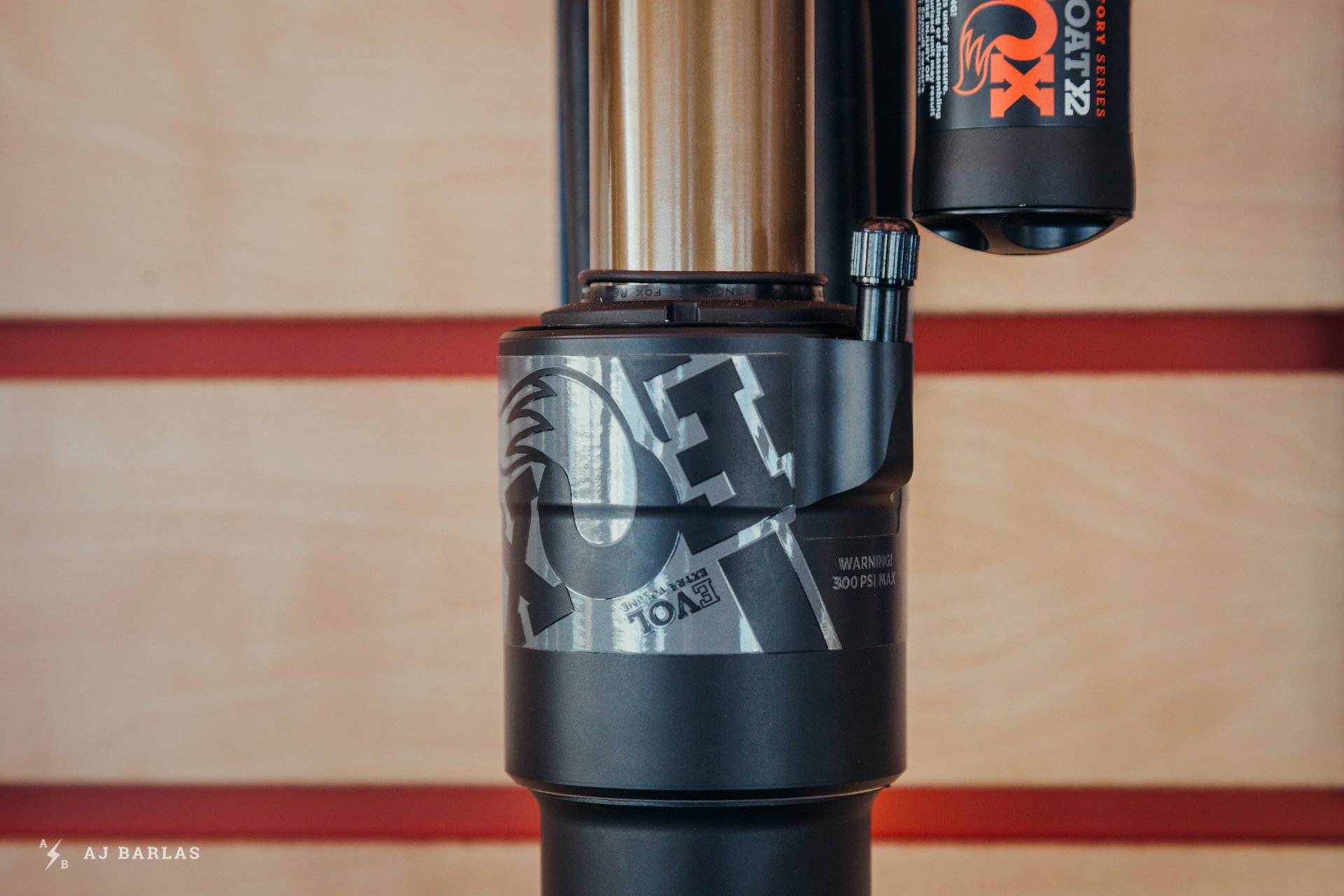 and the air valve alignment was given a nudge for easier access.

Head to the Fox website for more on the 2019 range and stay tuned for our review of the new 36 and Float X2 later this year.

Marzocchi was proudly showing off the new Z1 and 58 forks at Sea Otter. With the brand now part of the Fox family, there are obvious similarities but the Marzocchi forks remain true to their heritage of being a little more overbuilt. The new line is also hitting a price point on the market that should be well served if it lives up to expectations. The forks feature the FIT GRIP damper and EVOL air spring technology but come in a burlier package. While Fox does have a 36 optimized and rated for e-bike use, it is a separate fork while the stock Z1 is rated for e-bike use. 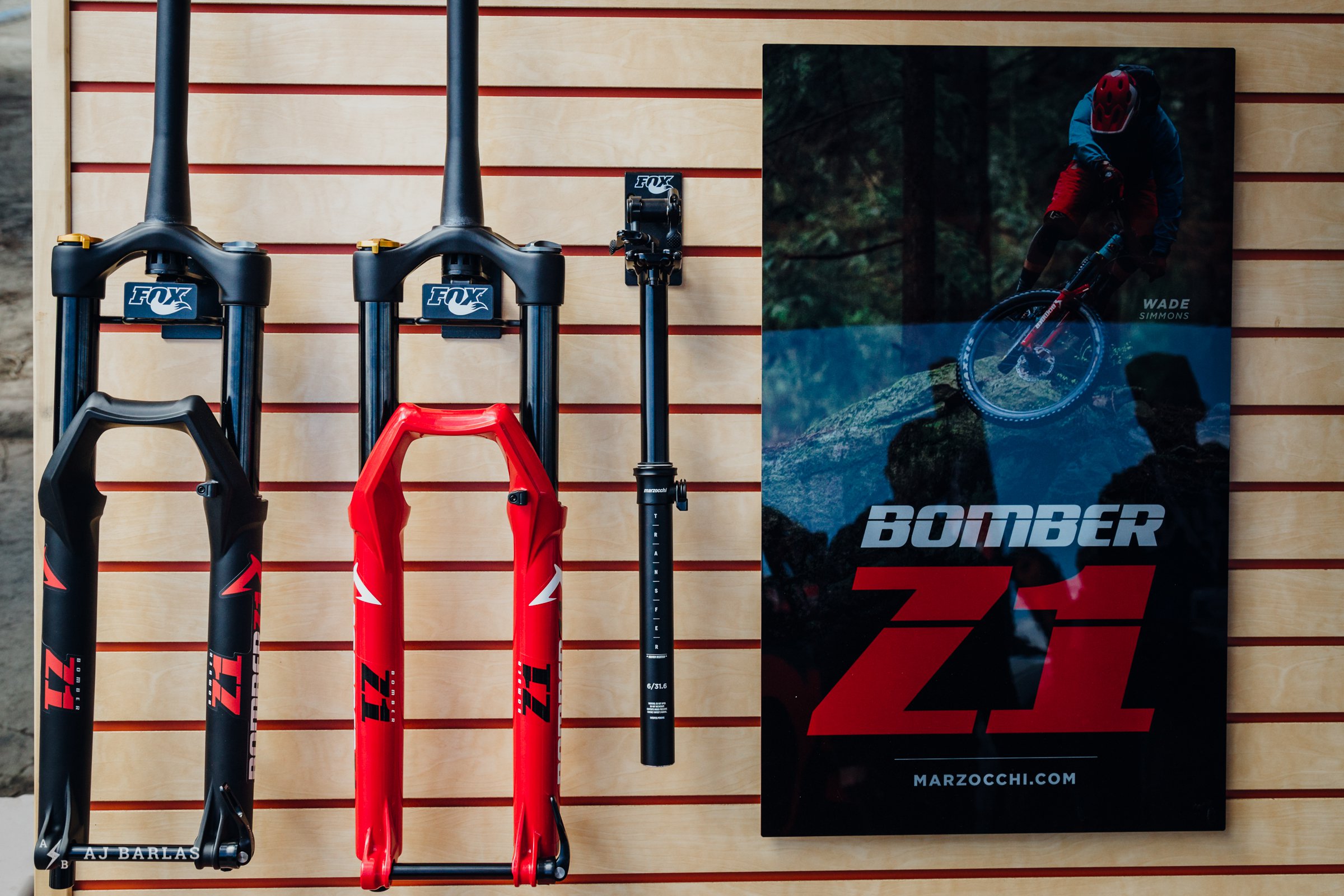 The 2019 Marzocchi Z1 does not look like a cheap fork. Oh, and they have a seatpost too. I was informed that it's the same as the Transfer.

Before you lose it over the mention of e-bikes, there is a benefit to the one-horsepower purists. A fork rated for the e-segment is going to be beefier which means better durability. It's also a good option for riders looking for more stiffness and better tracking; a great option for those riding in the Clydesdale class.

This burliness results from thicker stanchion walls and a bigger crown. This produces a slightly smaller diameter air volume spacer meaning you can't swap between Fox and Marzocchi. The Boost-spaced fork will accept either a tooled axle or the quick release shown in these images. The Z1 will retail for 699 USD and it packs in a lot of quality tech that we see in the lower tier of the Fox line. 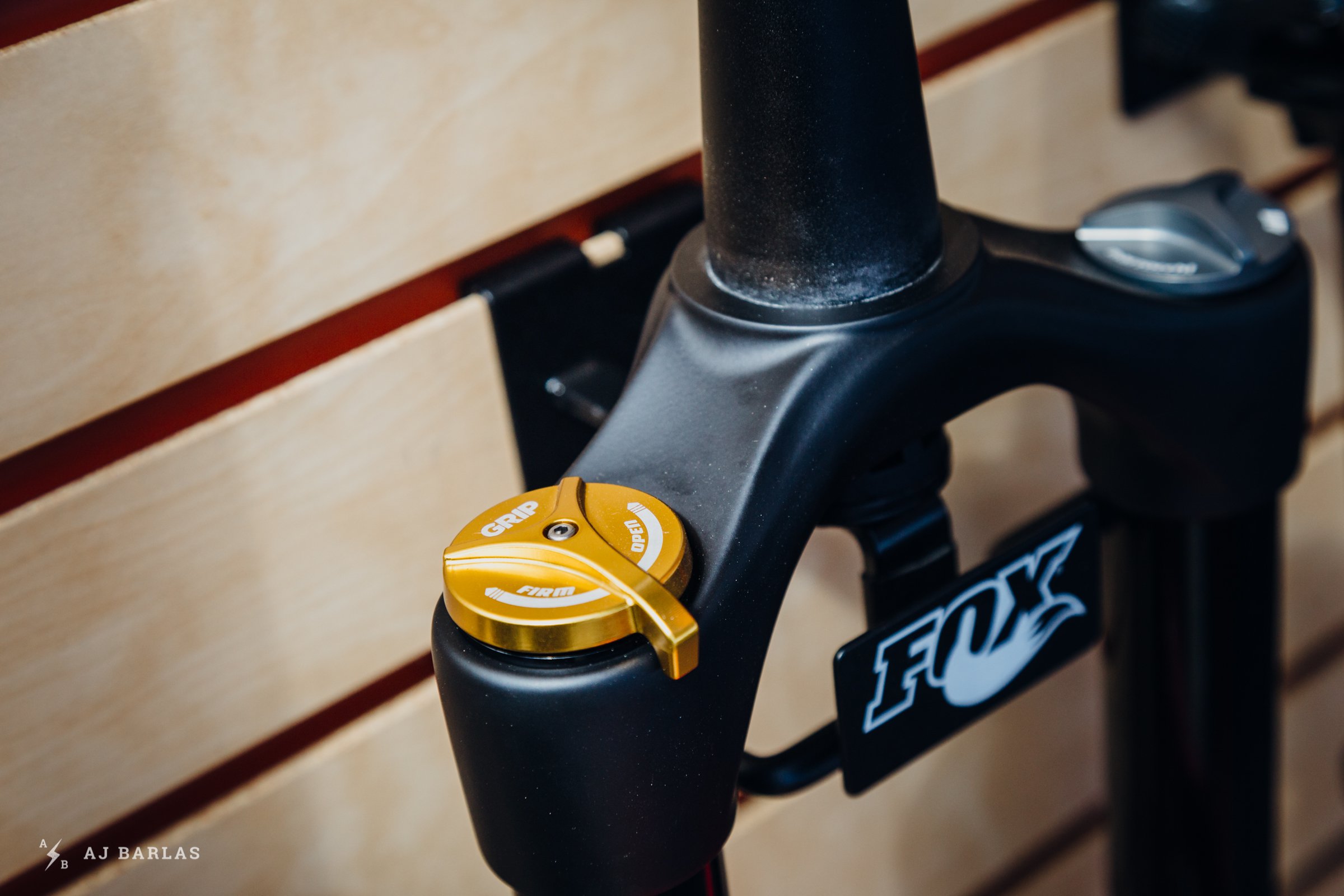 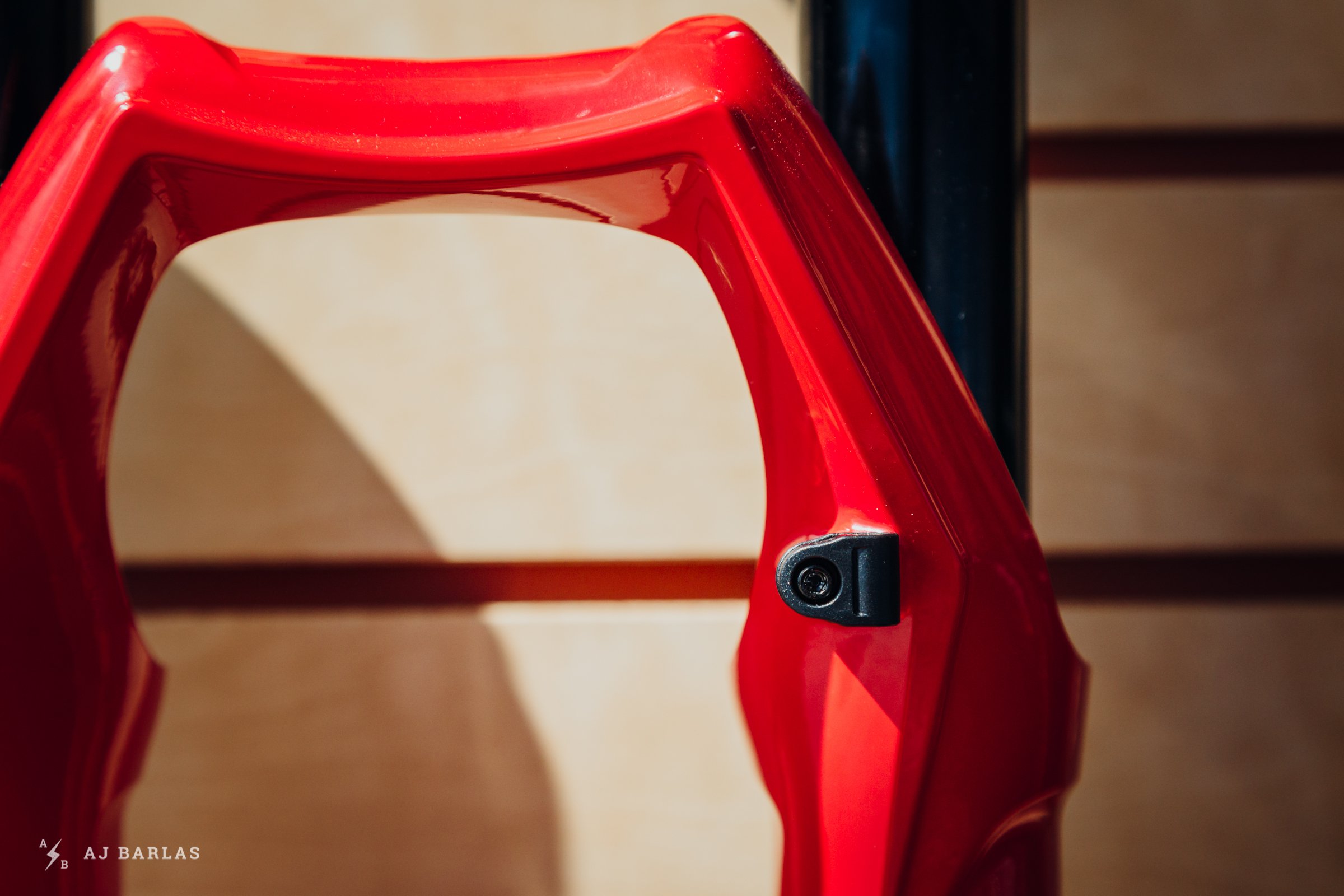 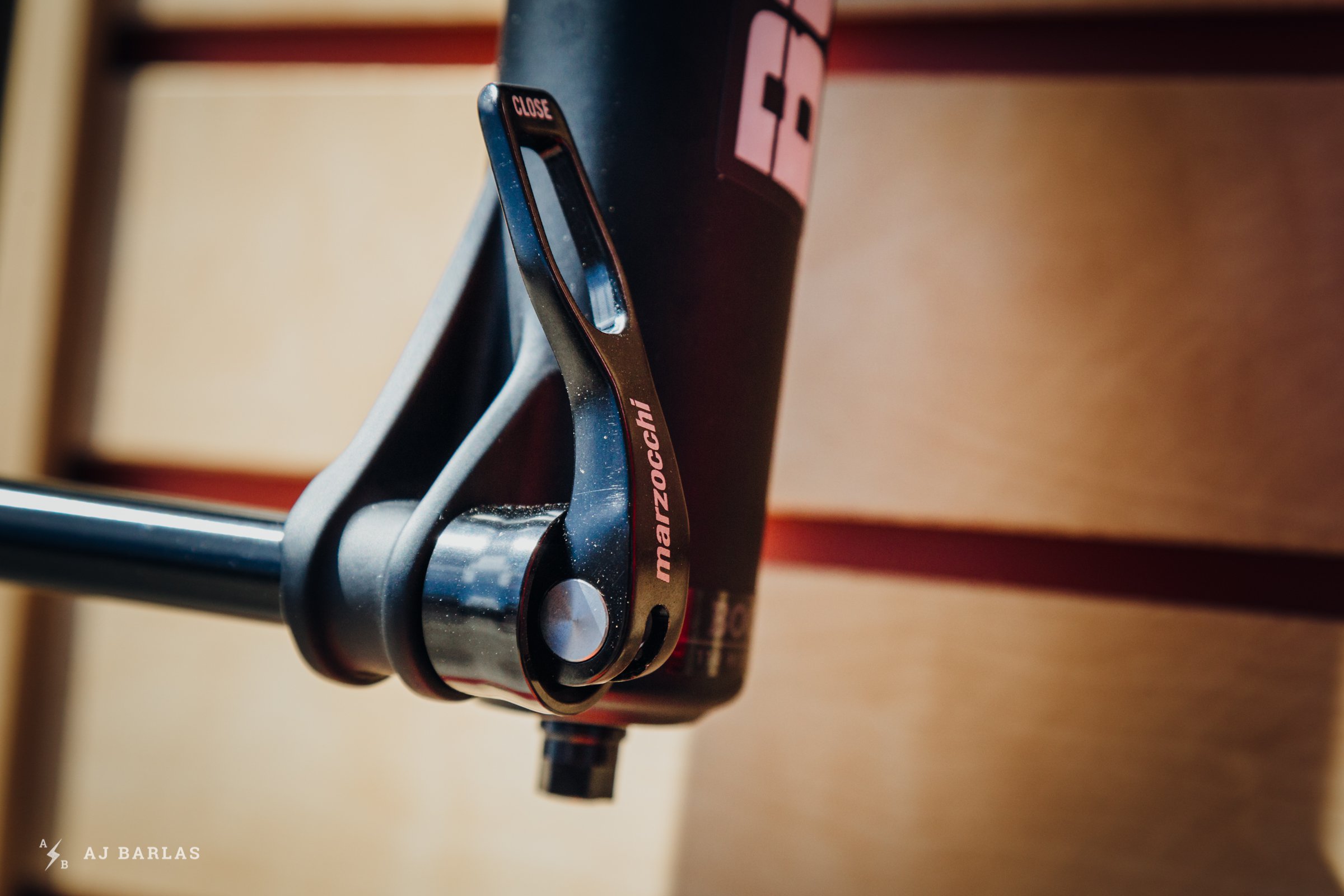 The Z1 can be purchased with a QR axle pictured, or a tooled axle. 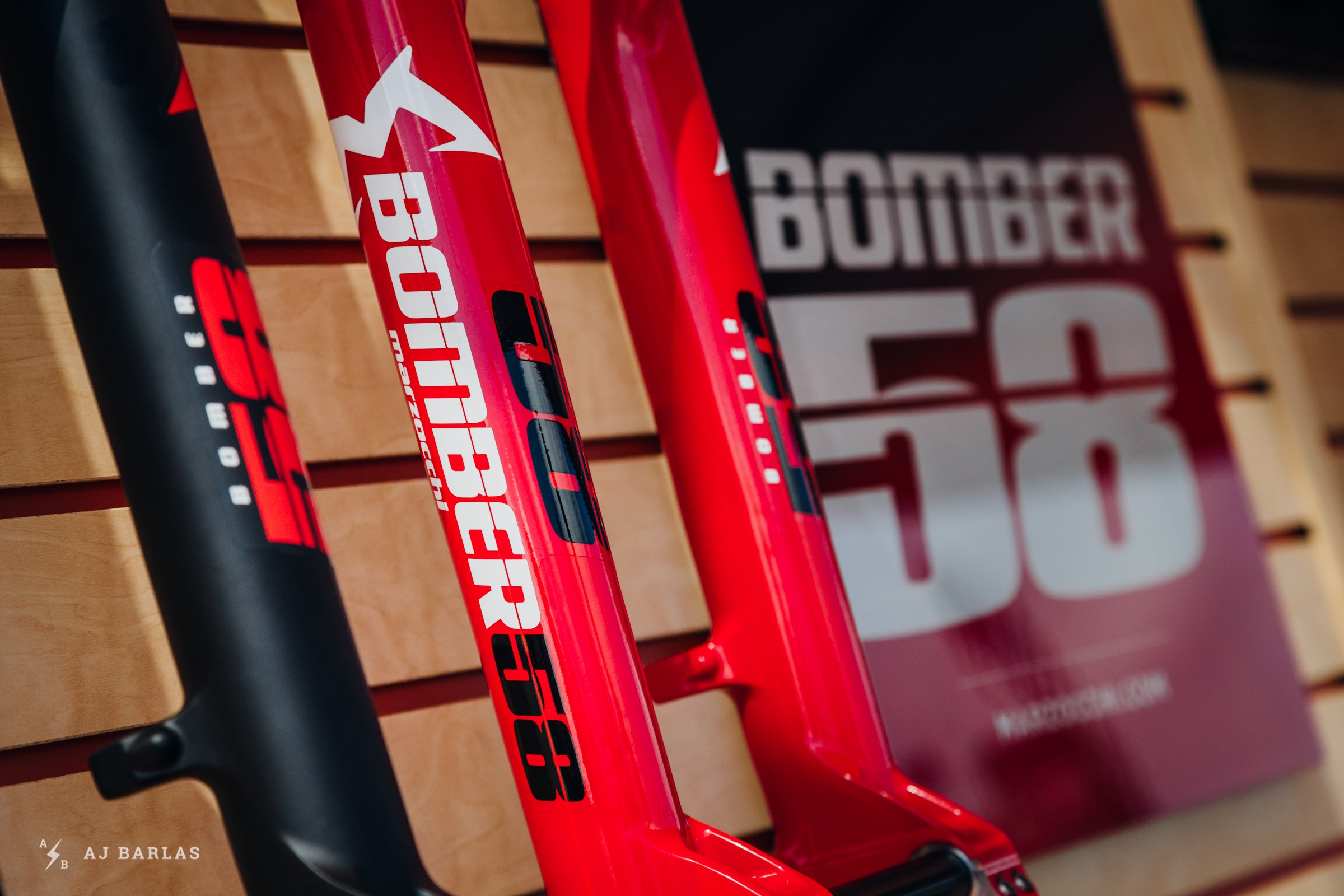 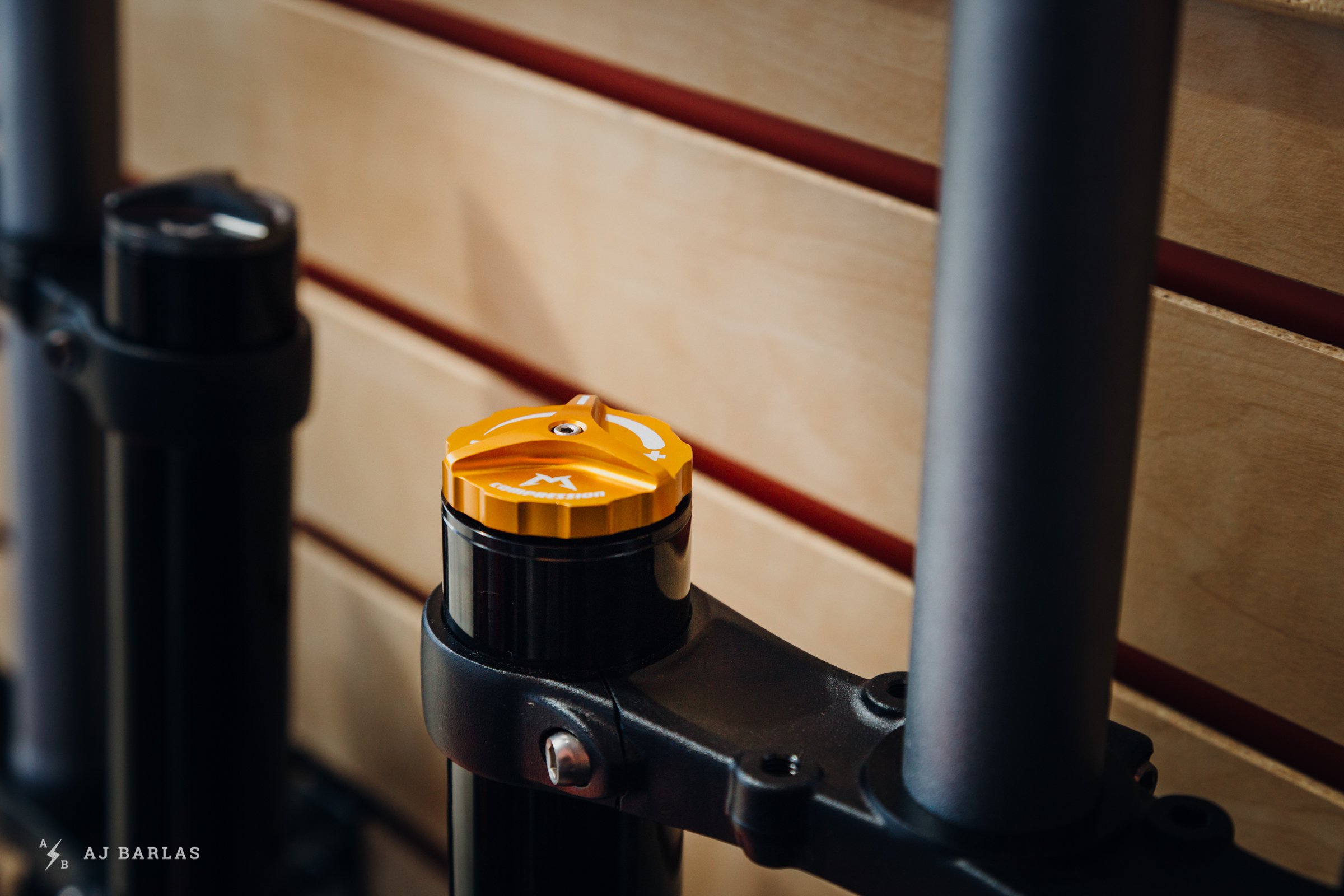 It utilizes the FIT GRIP Damper… 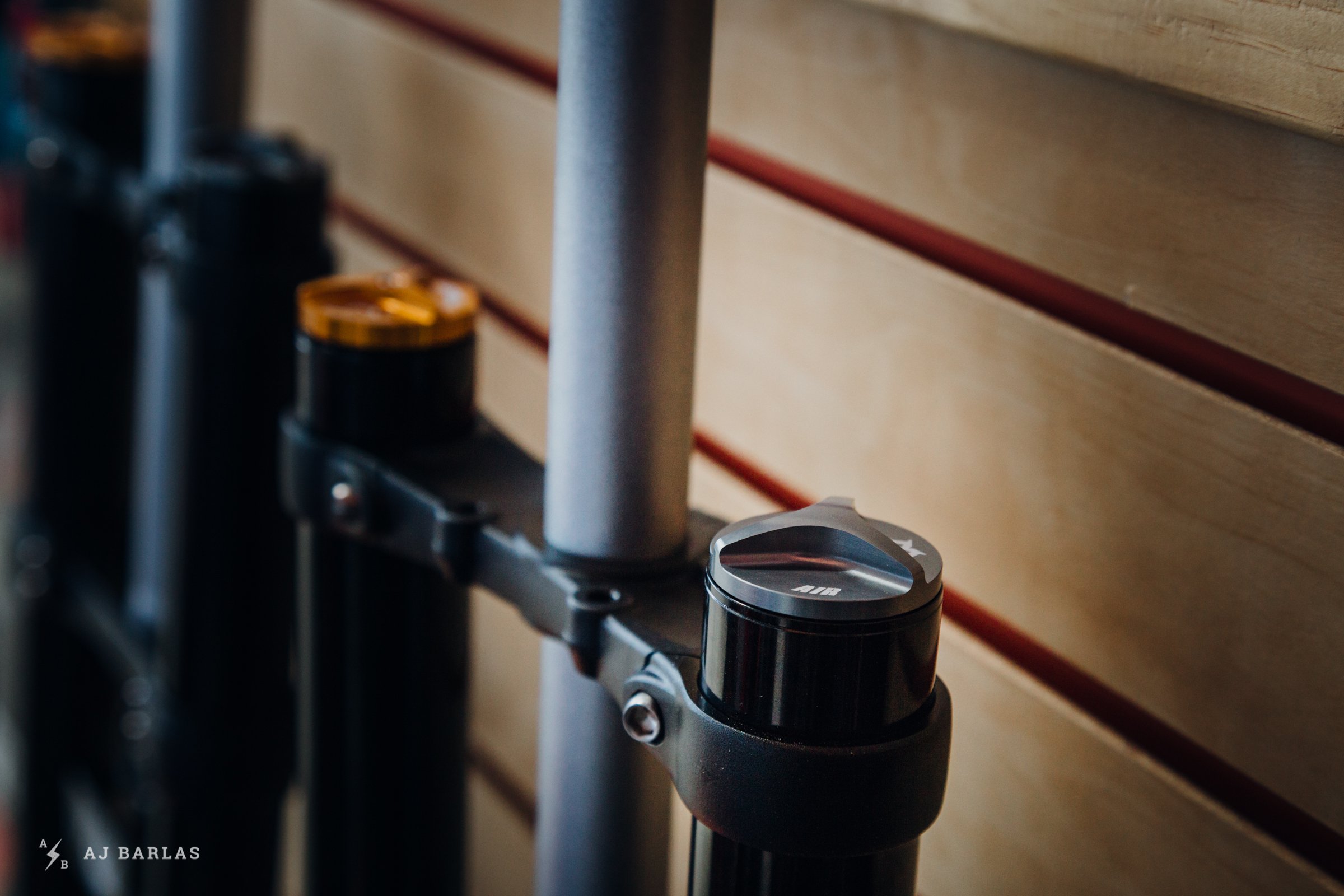 and the EVOL air spring.

Unfortunately, it looks as though the Marzocchi site is yet to be updated. We'll try to keep readers posted but you can also keep an eye out for a review of the new Z1 later in the season.

Any chance of a full pic of the Mazzochi 58? Still to this day my fave Dh fork was the original 888. Plush, great tracking and fit and forget. Beats my current Boxxer on many fronts. Just picture it with red lowers.

Did you find a reason to buy a Marzocchi? They are basically like Fox Performance Forks. Why shouldn't I take the Fox?

A price difference of $200 USD is what separates them.  That's 22% less expensive for a slightly heavier (beefier) fork, with slightly simpler damping.

What Mammal said. It's an interesting time for the brand and although there are for sure diehards that will get back in that world because that's the corner they wish to side with, the savings for what sounds to be a good fork, one that is more robust, will definitely appeal to others.

In theory the Marzocchi solves the two notable issues with recent Fox forks at a 1/2-lb weight penalty and significant (~pair of fresh tires) cost savings:

2) The notably beefed up stanchions/crown (E-Bike rated) should be much more resistant to creaking pressfit interfaces.

With performance being equal I can’t think of a reason local riders (and heavier racers) wouldn’t buy the Marzocchi version.

In that sense it reminds me of the first Z1. It just makes sense.

Here's hoping they offer the Z1 in 170 mm travel with a good damper and coil spring in the near future.

May be named Marzocchi but it isn't a Marzocchi,  and sadly never will.  Makes me remember all the good forks they brought out until they screwed it up.  For my latest bike it is a Fox 36 Kashima.  No other choice, really.  But thankfully a good one.