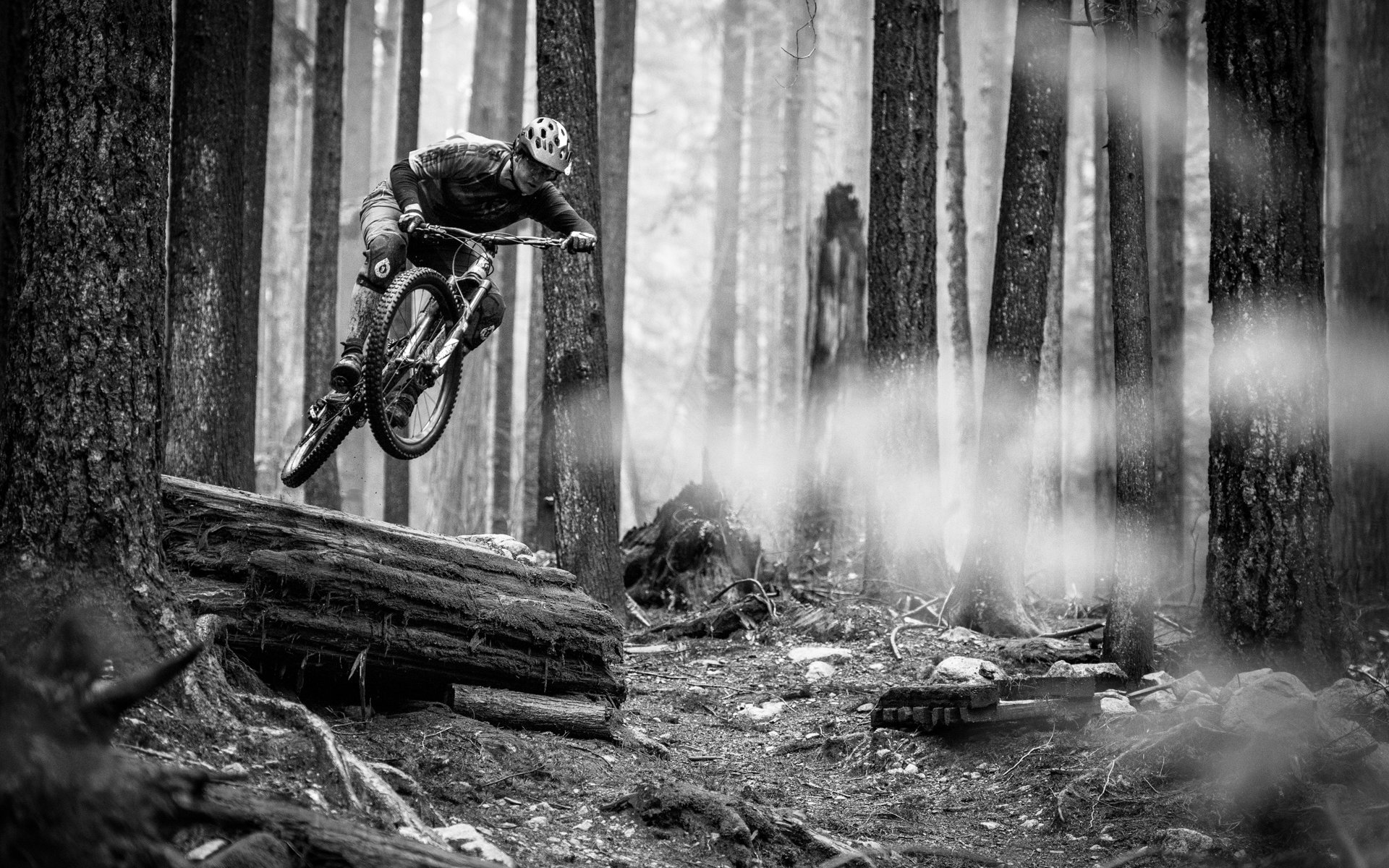 A pretty blue Transition Patrol Carbon to test long term? Yes please. With some new 2017 SRAM bits? YUM, hell yes! This Patrol has been a test mule for us this winter. You can check out the first look article, or check out some of the reviews below: 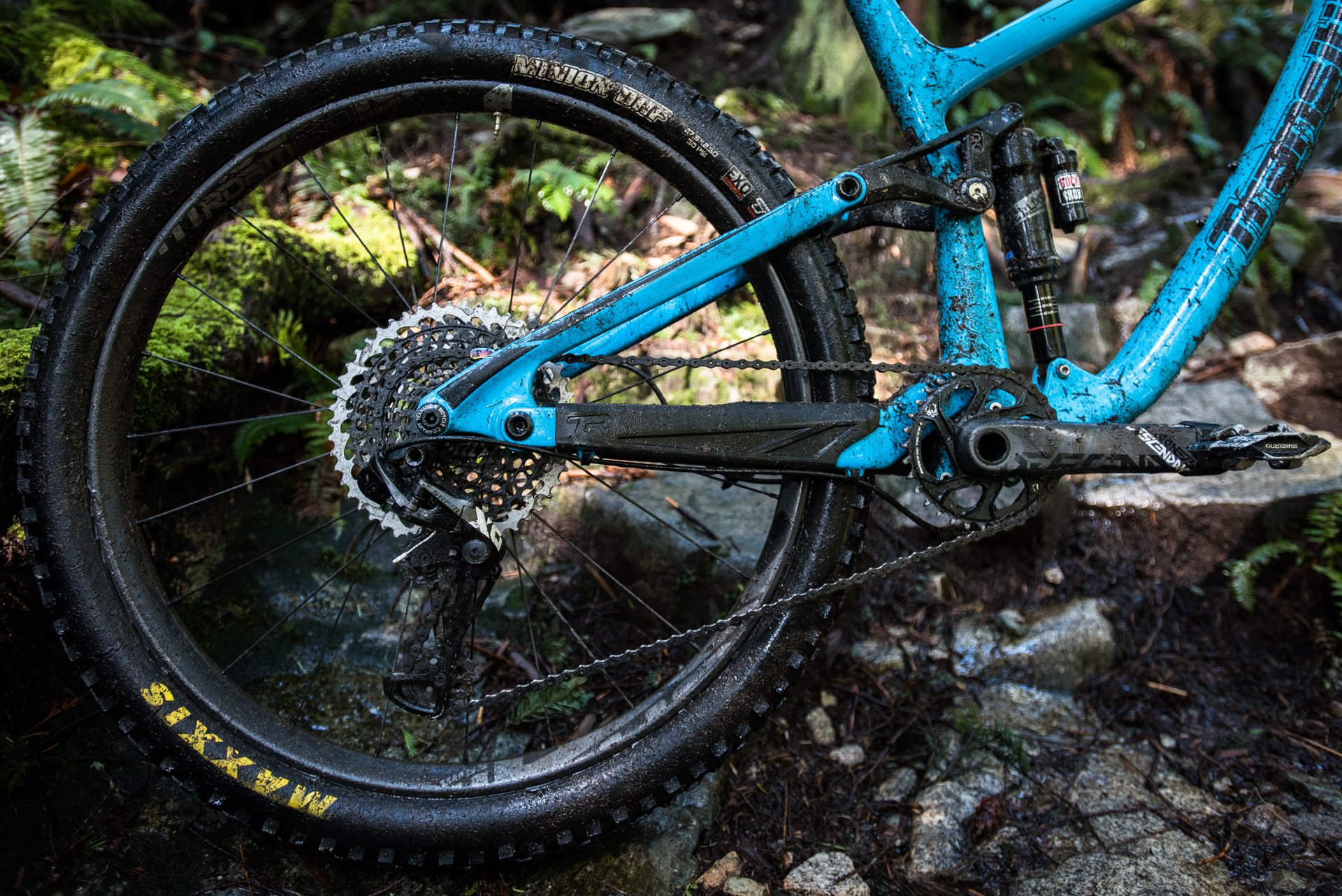 The Patrol uses Transition’s “Giddy Up Link” suspension, which is their take on a four bar Horst link rear end.

On to the Transition Patrol then, which has gained a cult following since its launch back in 2014. Transition followed that up with the launch of the carbon version in September 2015. Since then much has been written about the Patrol Carbon including winning bike of the year with a number of publications. In all the years I’ve been reviewing bikes, I’ve never been asked so much, “where is the Patrol review brah?” I only mention this because there seems to be a unique thirst for this bike. 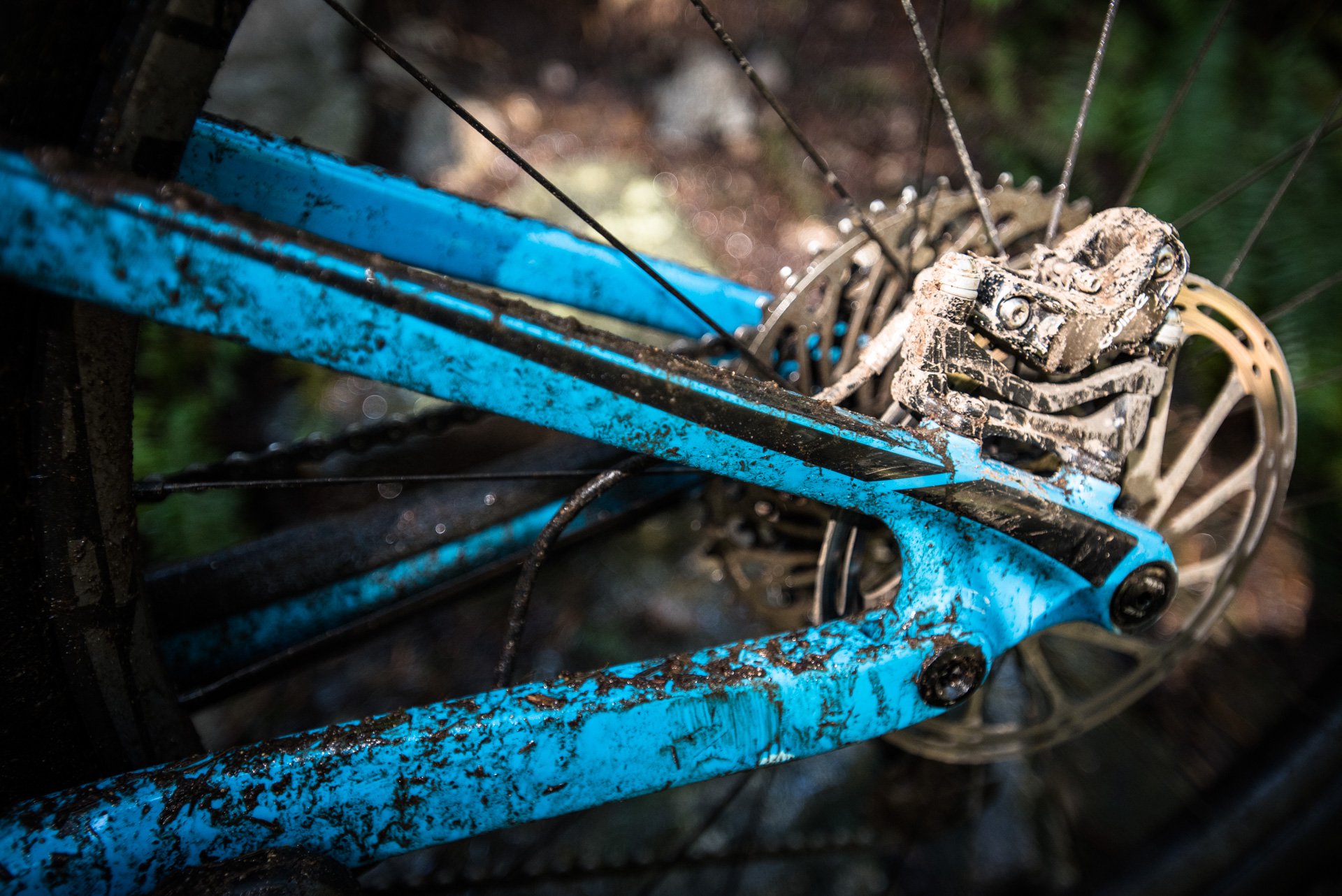 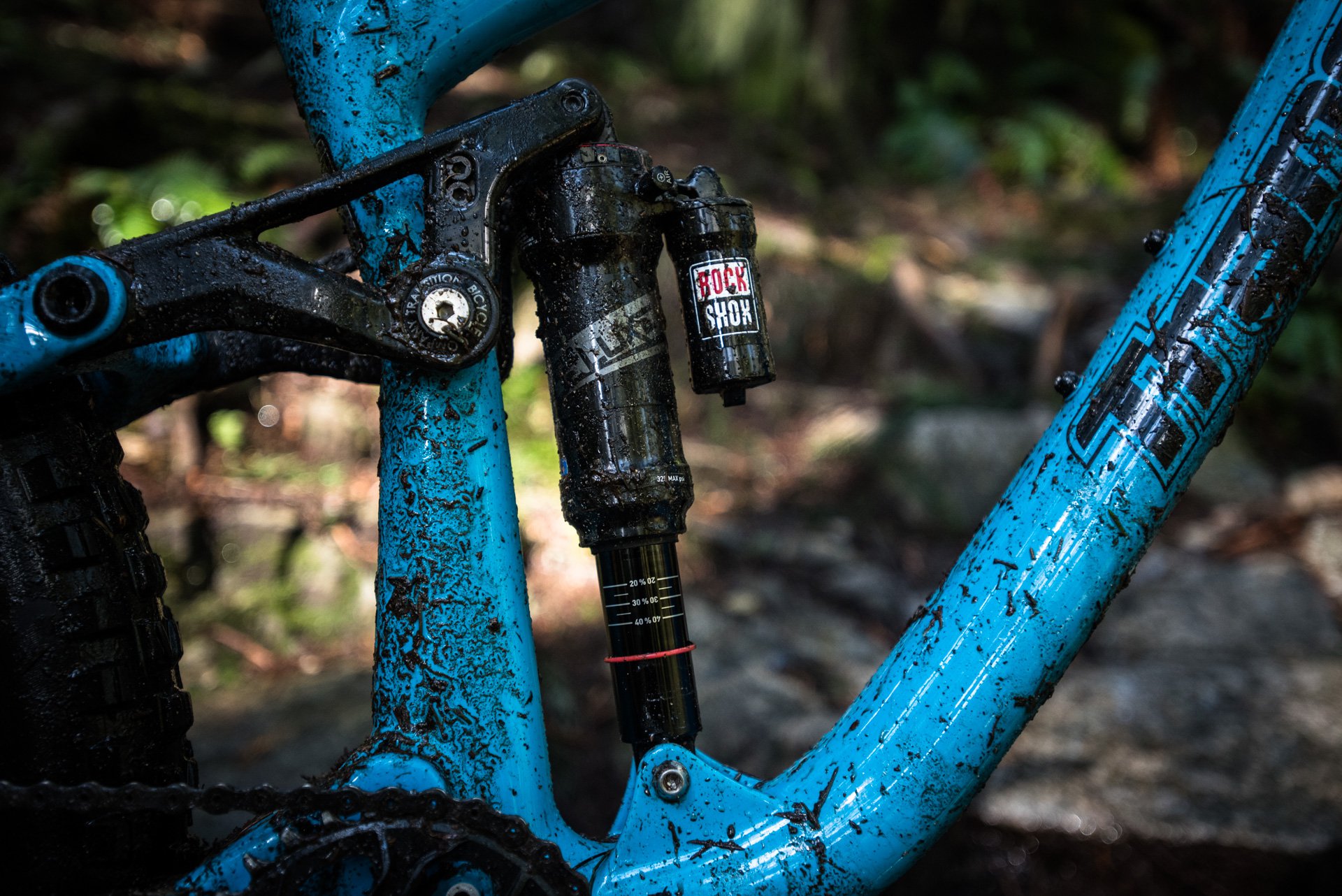 The particular bike I’m riding uses Rock Shox’s new Super Deluxe Metric shock with a new rocker from Transition. There are two bearings in the upper mount of the shock, intended to reduce rotational friction during shock compression.

The long, slack and low geometry of the Patrol was ahead of the curve when the Patrol was launched in 2014. Since then, most 160 mm travel bikes have featured similar geometry - a compliment to Transition's geometry choices. The geometry of the Patrol Carbon is identical to the aluminum version, the only difference being about 600 grams of weight savings for the Carbon version. The Patrol uses a 4-bar Horst link rear end, with a moderately rearward axle path, and a slightly progressive linkage. Aesthetically I think the Patrol looks fantastic with flowing lines and smooth curves. The Patrol comes with all the bells and whistles you’d expect from a top shelf frame: integrated frame protection on the chain stay, excellent fit and finish, oversize collet pivots and internal cable routing. This particular Patrol Carbon, however, also has a rocker that integrates with the new Metric shock sizing. 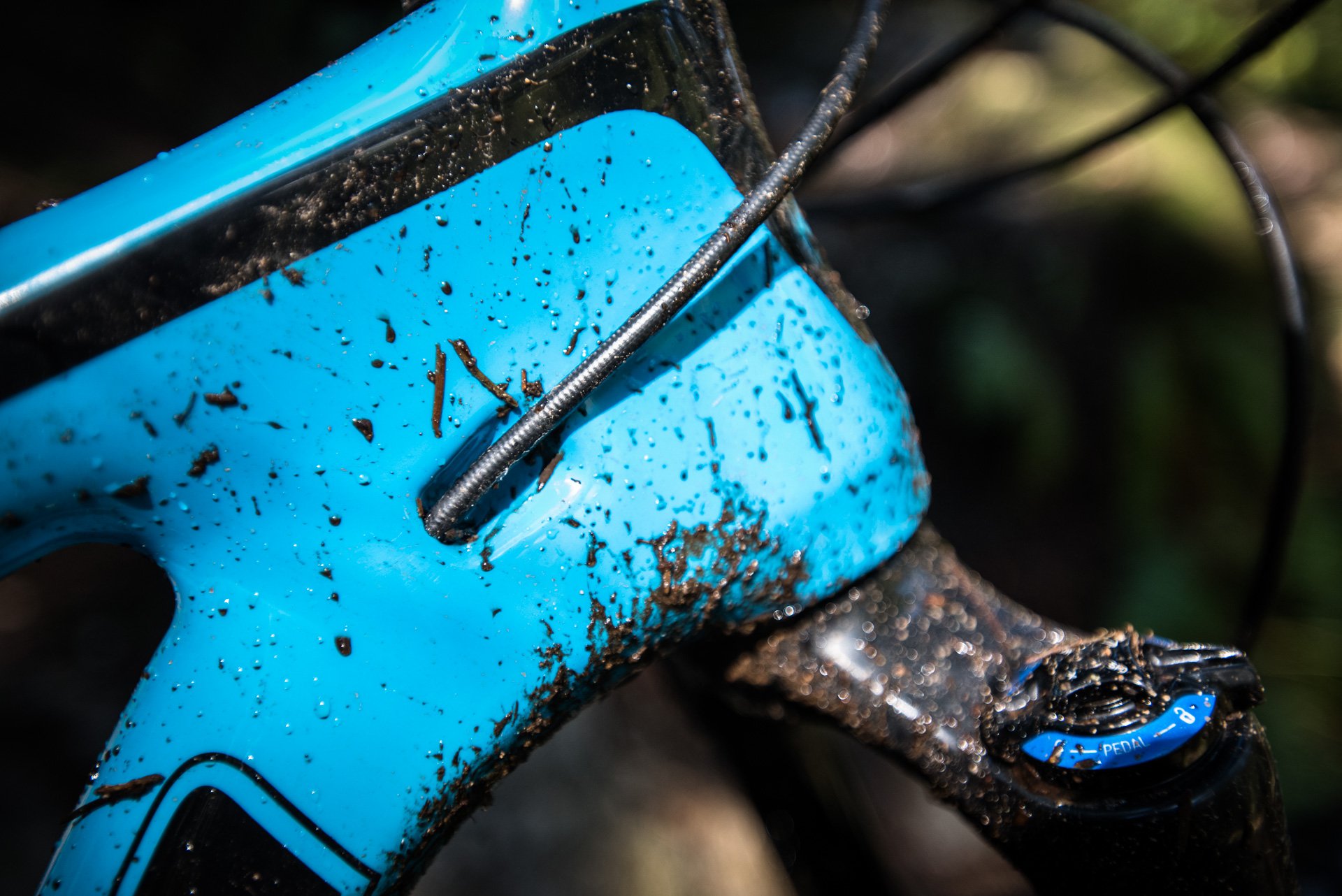 Clean internal routing. The Tube in Tube System (TITS) works awesome, and resulted in no cable rattle during use.

Visually the new Reverb is almost identical to the old post. Only some subtle gold lettering hints at the changes inside: 150 mm travel and faster extension speed. The remote appears identical, but a push of it results in surprisingly fast post extension. I welcome a fast Reverb, as I always ran my old Reverbs as fast as possible. On the new post, I had to use the speed adjuster to slow the post out of fear for my gentleman bits. Apparently, the internals have been significantly revised to prevent air from bleeding across the internal floating piston, resulting in the dreaded squishy seat post. This hasn’t seemed to have worked as this Reverb went soft faster than I do. The good folks at John Henry Bikes got the post fixed up, and I was back on the trail. A couple months later, however, and the post is going soft again. Bummer. So while I like the increased travel and faster extension speed, durability is still a concern. 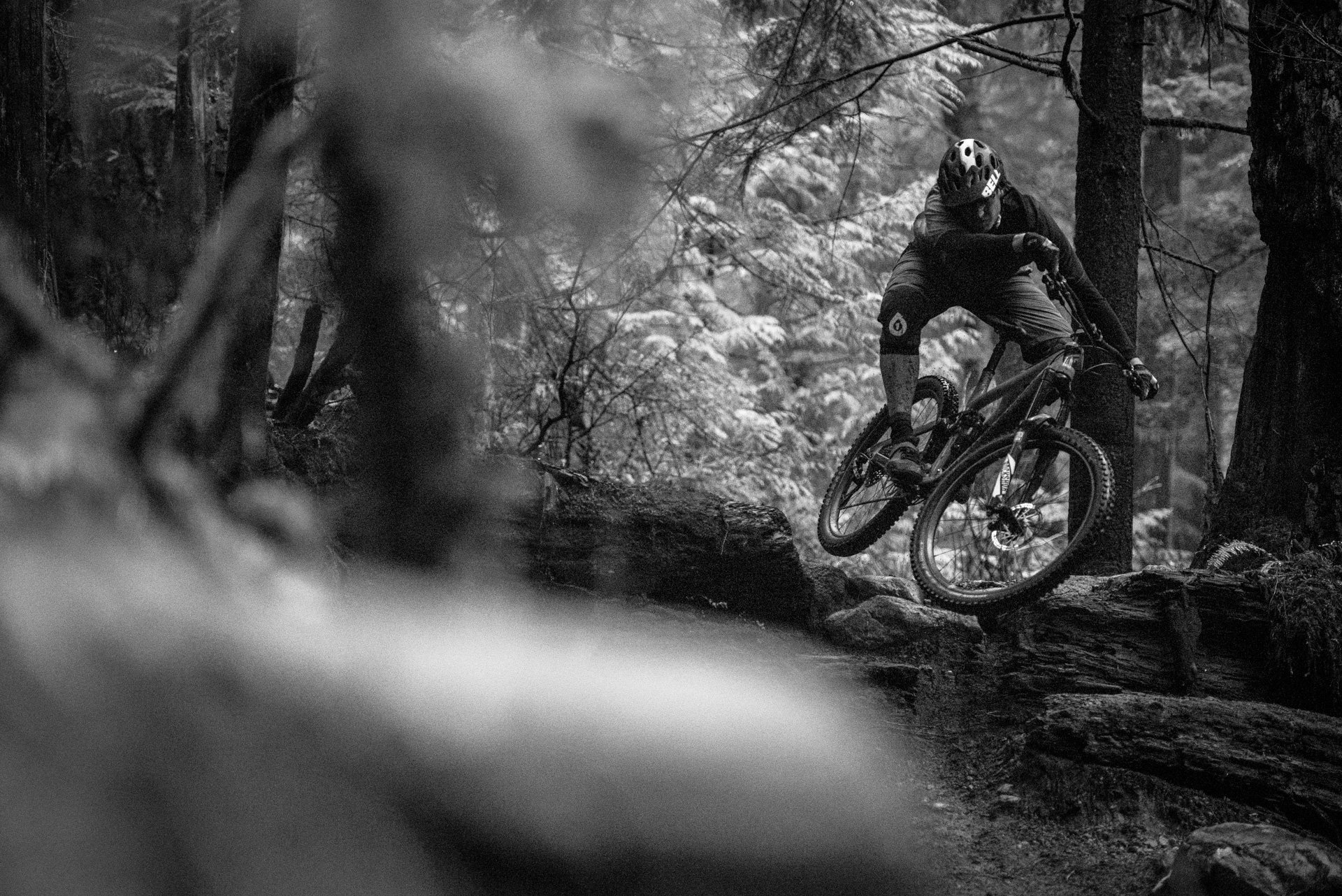 I liked the extra travel on the new Reverb, giving just that little bit of extra clearance.

The new Rock Shox Super Deluxe comes in Metric sizing. Rock Shox reported that the new sizing would allow increased bushing overlap, and would result in better rear shocks. To me the new Super Deluxe feels an awful lot like the Monarch Plus in terms of air spring and damper. The Super Deluxe offered up adequate damper performance on the Transition Patrol, and the air spring curve meshed well with the linkage design. That said I’d always prefer a shock with more external adjustability, as I would have liked some additional low speed compression damping. So while the Super Deluxe did a great job considering there is no real compression adjustment on the shock, it’s also nothing scintillating to write home about. 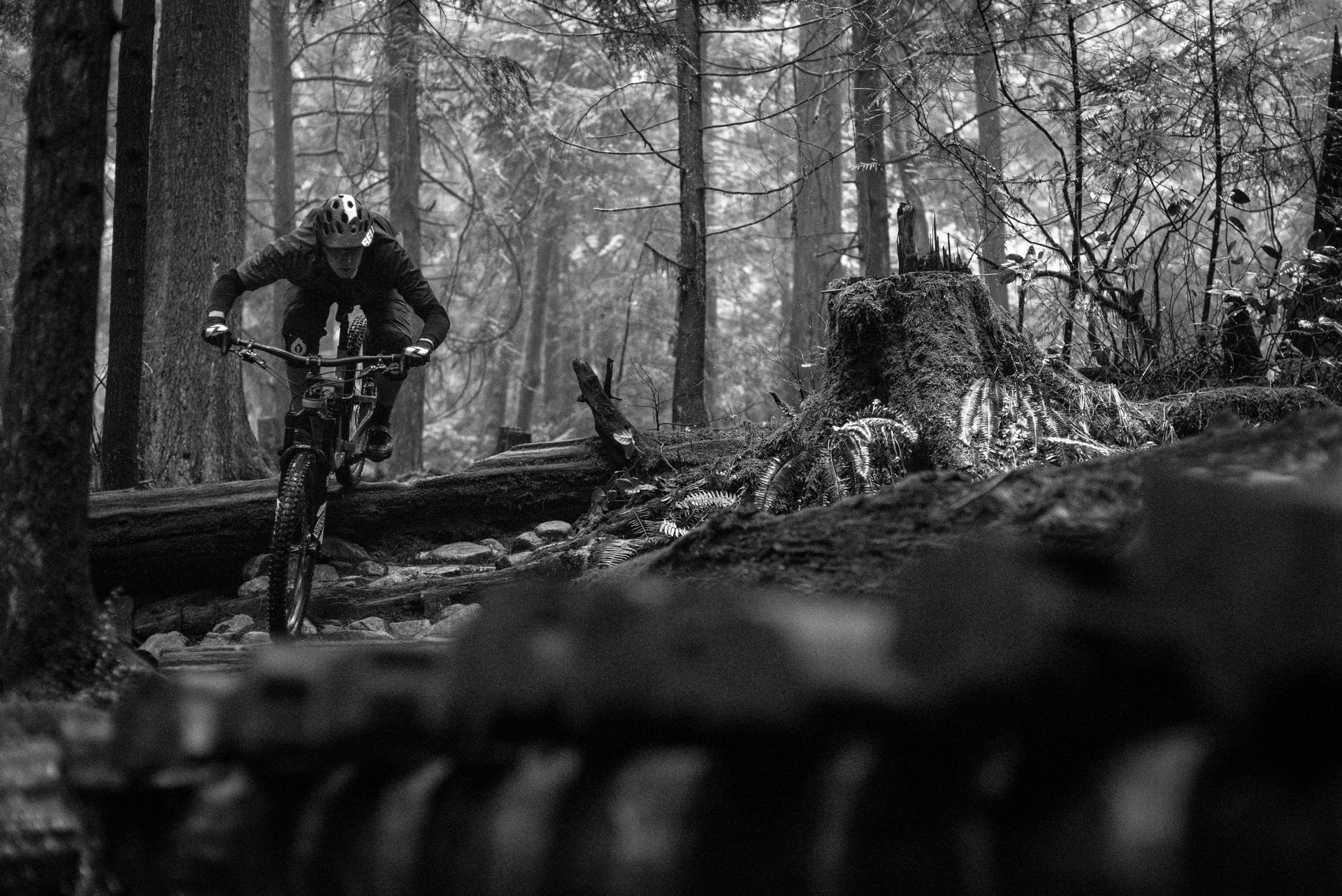 There ain’t much smooth trail around these parts. While I’d like a bit more external compression damping adjustment, the Super Deluxe did a great job eating up the gnars.

The Guide brakes were decidedly average, and slightly improved with a set of metallic pads. I discovered the hard way that the rear Maxxis Minion DHF was the hard AF variant, which resulted in some epic Tokyo Drift action and much excitement. 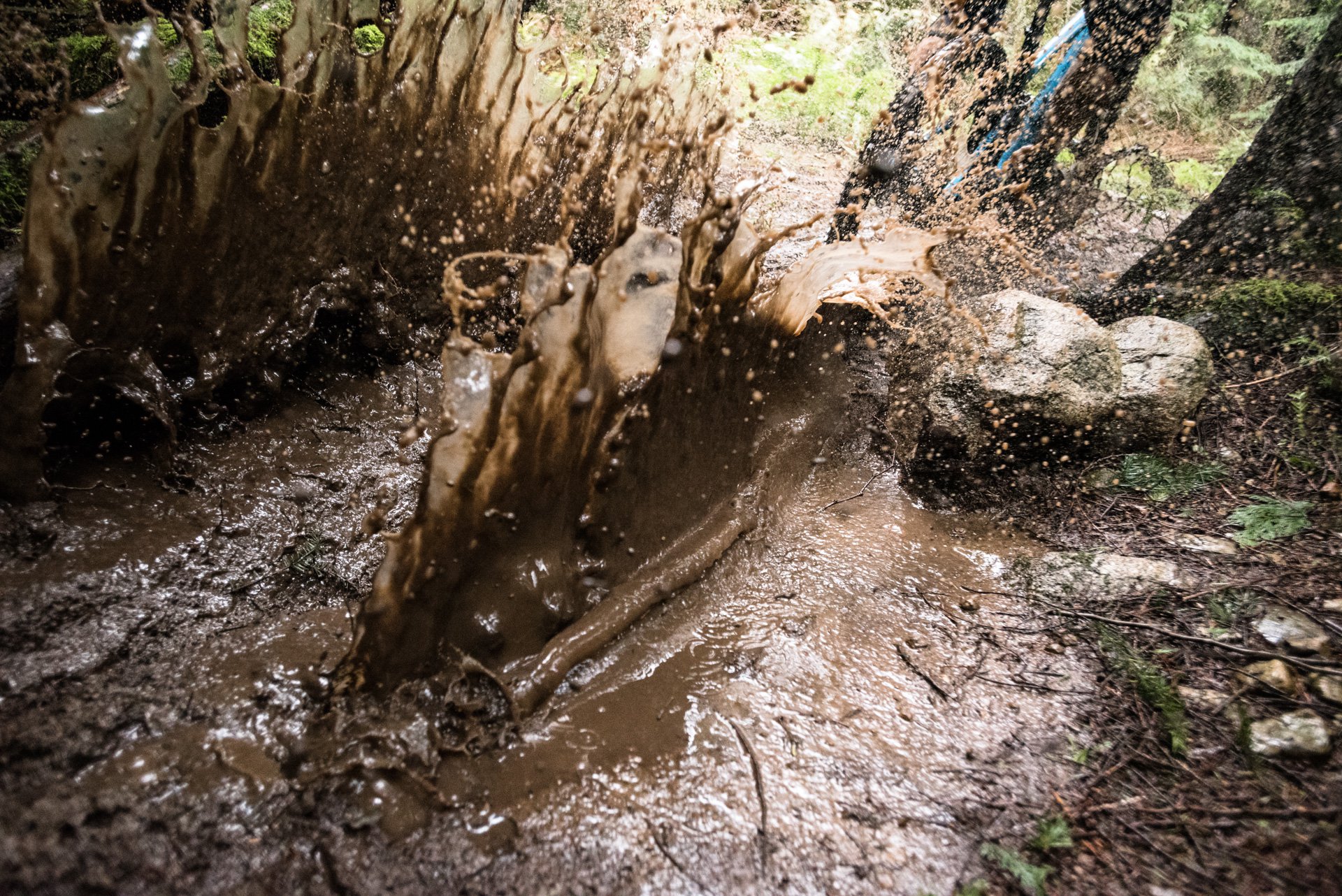 It’s been a wet and nasty winter here, and the Patrol has held up like a champ.

I tested a size Large, which based on my height of 6 feet is slap bang in the middle of Transition's sizing suggestion for the Large frame. While the geometry on the Large works well for me, if it were my personal bike I'd probably jump up to the XL, but with a shorter 35 mm stem (so not enduro bro). 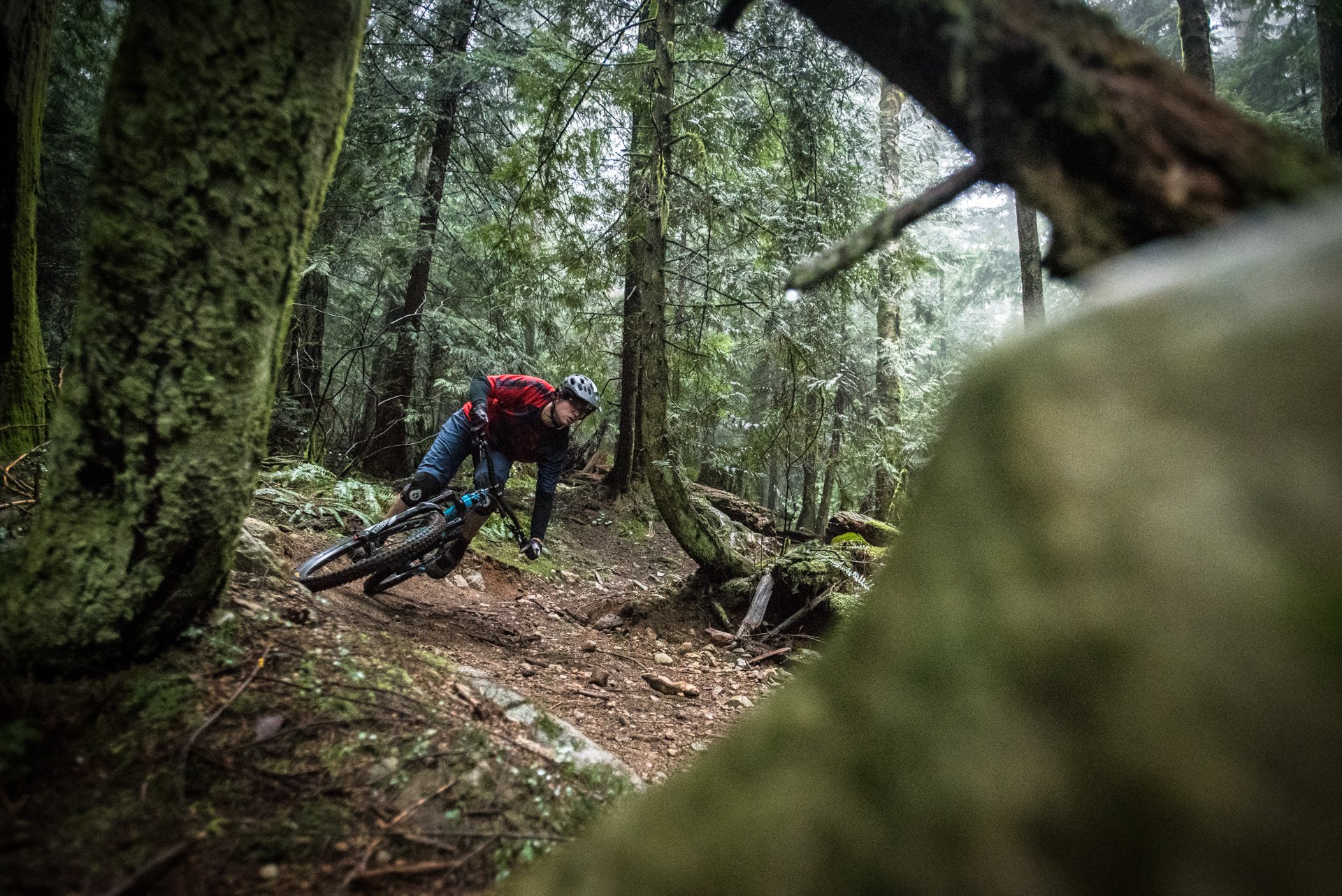 I have long arms and short legs, so I think the XL with a shorter stem would be the ticket.

My reaction when first getting on the Patrol was how eagerly it accelerated, and not just for a 155 mm travel bike. It goes like a stabbed rat. This is likely due in part to the light SRAM Roam 60 carbon wheels, but pedal strokes seem to get converted to forward motion with no loss in time or power. Pedaling the Patrol uphill was a breeze, and the Eagle drivetrain gave lots of range that made even steep climbs relatively easy. The seated position with the post extended is comfortable and places the rider in a good position to challenge technical climbs. If you sit back on the saddle the front end does get a bit light, but that’s easily cured by pulling your weight forward a touch. Let’s be honest though, you didn’t come here to read about how it climbs. 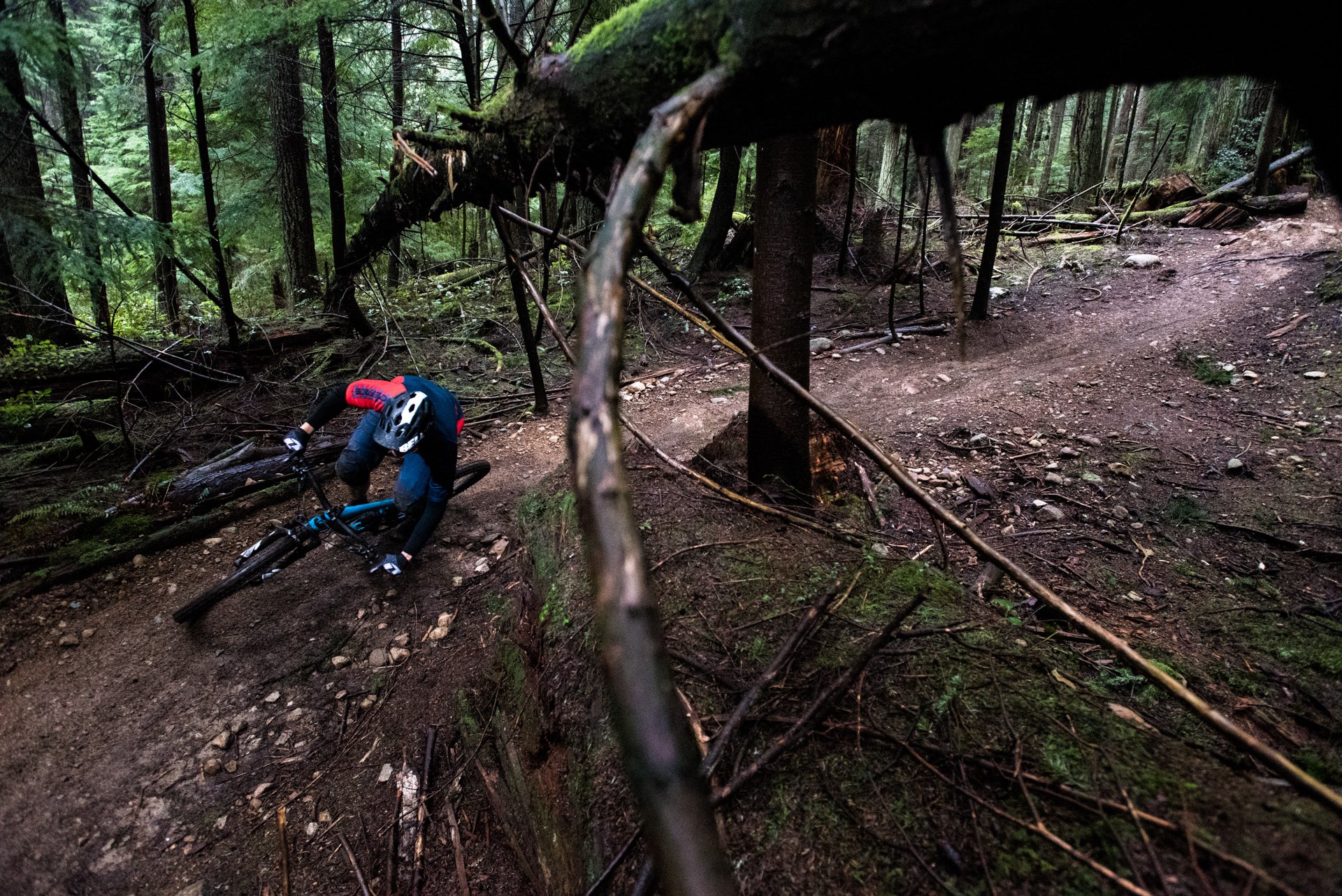 Normally I’d put some crappy climbing shot here. No one wants to see me climbing. The Patrol felt effortless diving in and out of corners.

So on to the good bit then. Descending on the Patrol is a giggle. I could end the review there. Regardless of the ride, or the conditions, the Patrol always managed to put a grin on my face. The Patrol seems energetic, full of life when descending. I feel like I have the freedom to place the tires precisely where I want them. The Patrol rewards charging in to corners, late on the brakes, slamming the tires on to the side knobs, rappppp, pick the bike up, back on the pedals … ahahahahahahaha! The Patrol almost begs to be abused. And then when you finally run out of mountain to tear apart, getting back to the top is no big chore. Maybe you couldn’t tell, but I thoroughly enjoyed my time on the Patrol. It might not be the slackest, longest, or the lowest, have the most rearwardness, or the best anti-squat or the lowest weight. But it doesn’t matter, the whole bike comes together as an exercise in compromise and results in a bike that is simply good everywhere. The Patrol may as well be called the Goldilocks, with almost all geometry, stiffness, and kinematic decisions being rather middle of the road. 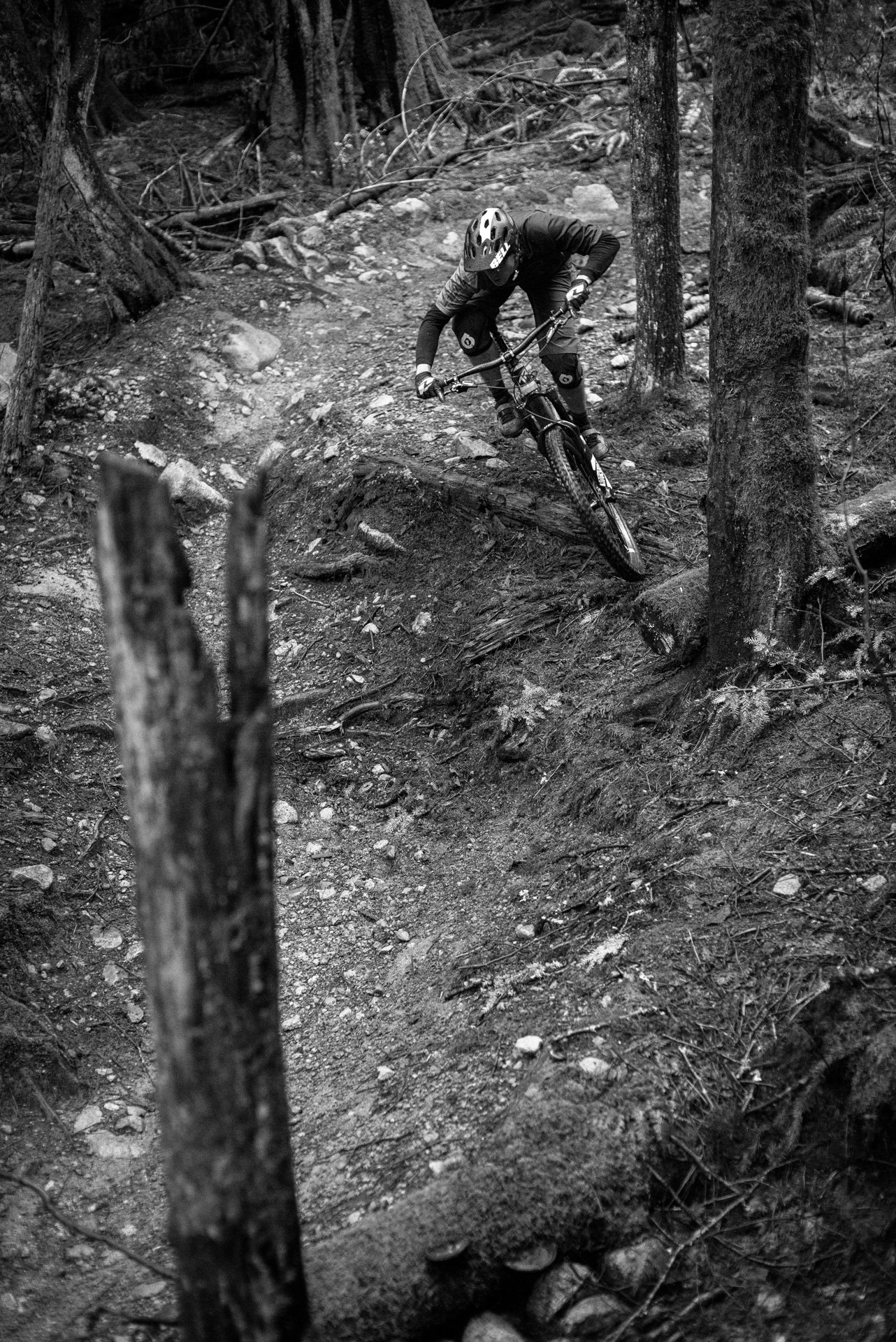 You might find yourself exploring fun lines off the main track aboard the Patrol.

The bad bits …. Ummmm … Uhhhhh. Ha. Maybe the cables hang down a bit low under the bottom bracket. And the paint scratches. In truth my only legitimate critique is that I wish the suspension was a little more progressive. Air springs have enough adjustability to be able to remove volume spacers, and a slightly more progressive leverage curve would be ideal for coil shocks. As it sits, the Transition Patrol would likely get through a coil spring a bit too eagerly. 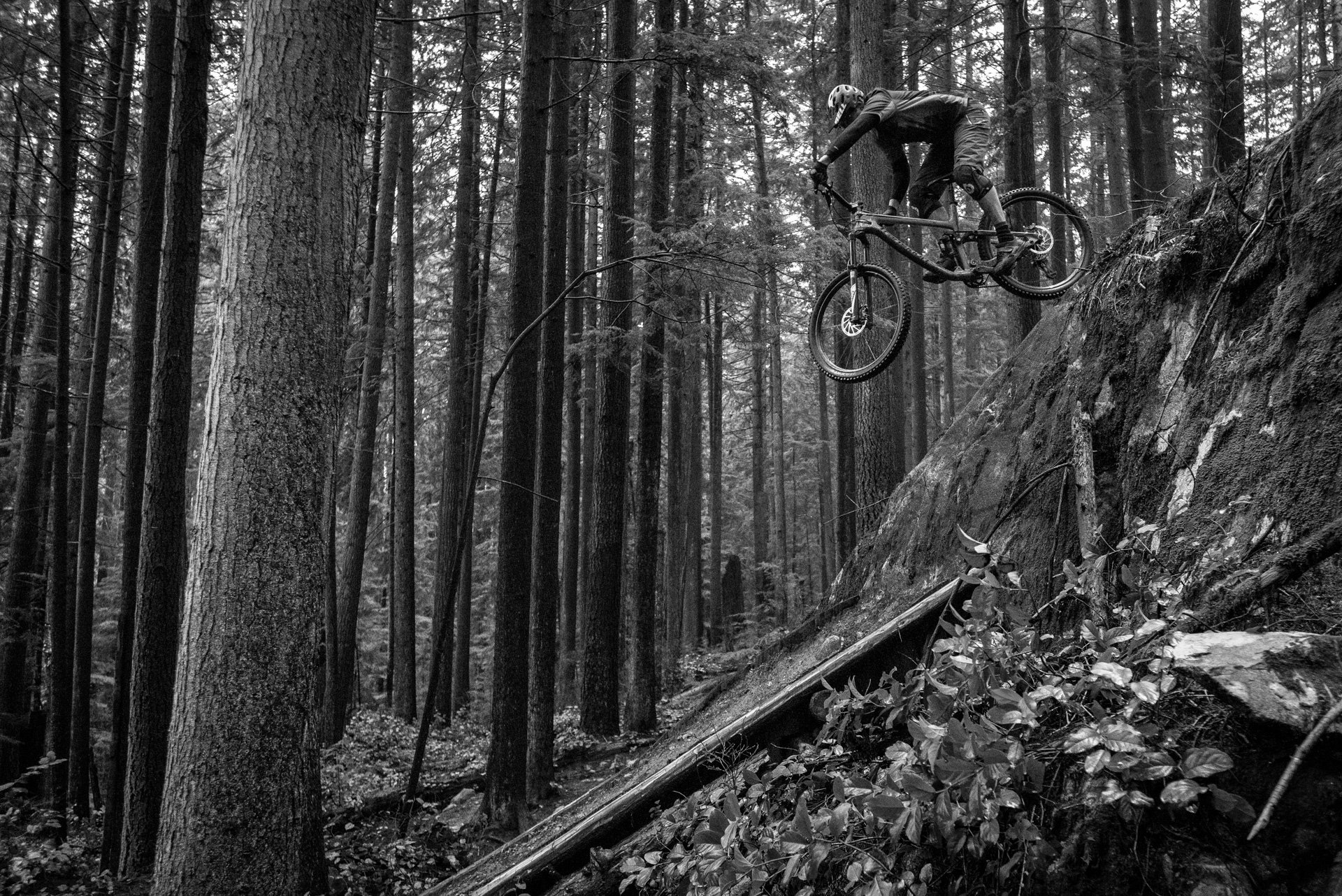 Going deep! The air spring progression with the Super Deluxe on the Patrol was good, minimizing big bottom out events … like half a second after this photo was taken.

In short, the Patrol is fantastic. It seems to pedal with ease and grace for a 155 mm travel bike. Pricing and weight are reasonable. It’s adequately stiff for aggressive riding, but not jarring either. Descending the Patrol is a sheer giggle on the trail. It never seems to get upset on rough terrain but is still agile enough to place it precisely where I want it. The Super Deluxe on the back is a good match, although if it were my bike I'd run something where I had more control over low-speed compression damping. My only minor gripe is that I really like coil shocks, and I would want the leverage ratio to be a bit more progressive. Cable routing is great, and I think the whole bike looks fantastic. I've got a bunch of time on it and through some horrendous conditions I haven't had any durability issues. 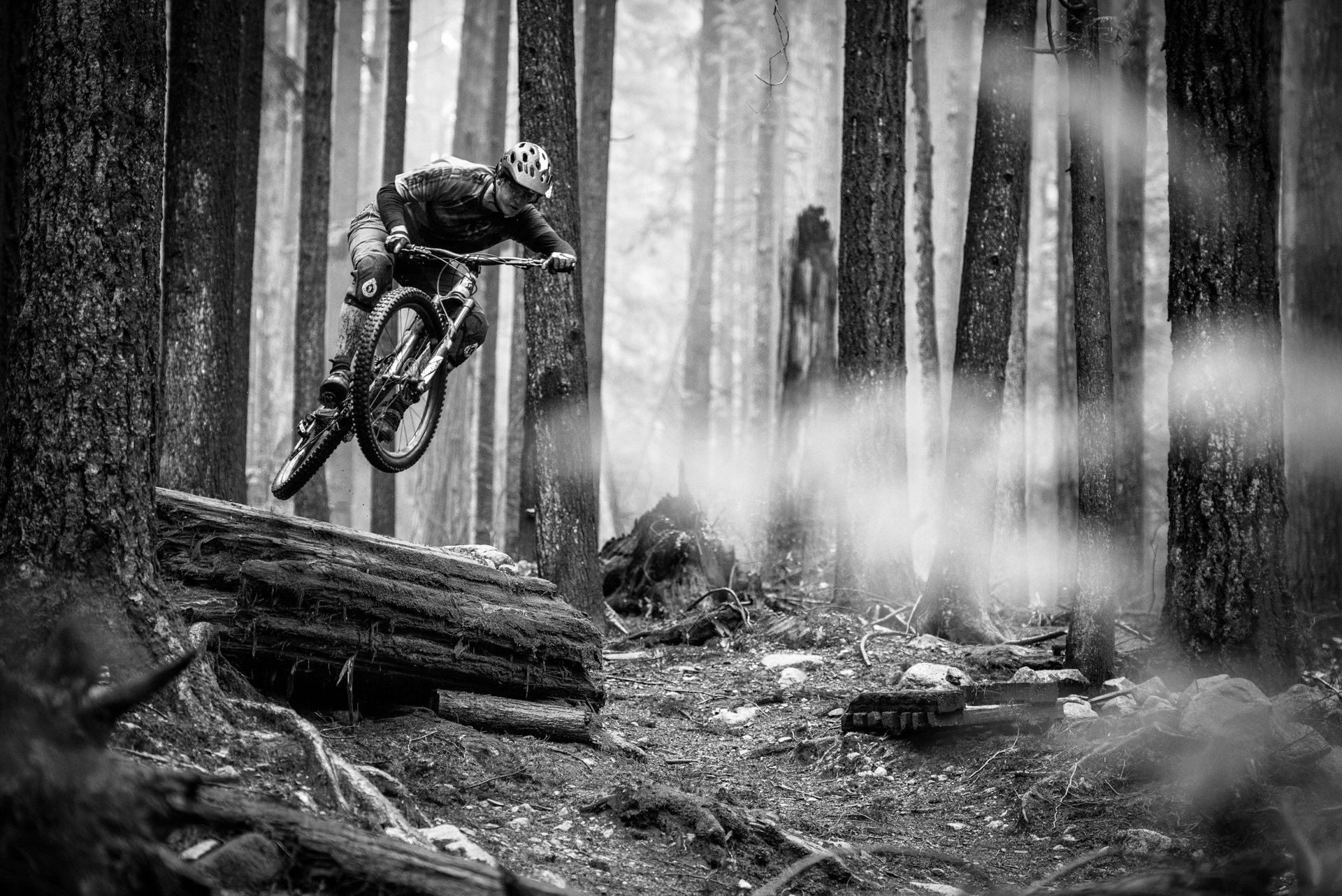 Since getting the Patrol a number of friends have tried it while out on rides. Everyone who’s ridden this bike, regardless of ability, has stepped off it with a huge grin on their face, and to me that’s the whole point. Sure, there are bikes that arguably pedal better, or that are better over square bumps, but as an all-around fun factory, the Patrol is tough to beat.

I don't want to be that guy, but: when is the Bandit coming back? Transition knocked the Patrol so far out of the park, and the Smuggler is so good at what it does... The Patrol is probably the epitome of a goldilocks bike in BC, so I'm wondering what a 140/150mm wagon wheeler from Transition that ticks all the same boxes otherwise would be for a tall desert rat like myself.

A revised 130mm Smuggler would do the trick.

What did you settle on for sag? did you experiment?

I definitely experimented with air pressures. I'll check the pressure and sag tonight and report back.

Been working on the shock a lot, my fat ass needs more air!!

I didn't like how high the seat was at the lowest position, when I rode a friends. I wish they'd made the seat tube straight and uninterrupted to the bottom bracket so that there would be more room for longer droppers.

Thanks man, but I think the real credit goes to Dave!

I run a CCDB coil IL on my suppressor with a more linear leverage curve than the metric rocker without any issues.  The shock is the weak point on this bike.